Rex Tillerson's corporate background: Is a CEO a good fit for secretary of state?

ExxonMobil’s boss will carry plenty of baggage to his confirmation hearing, but leadership skills aren't an issue 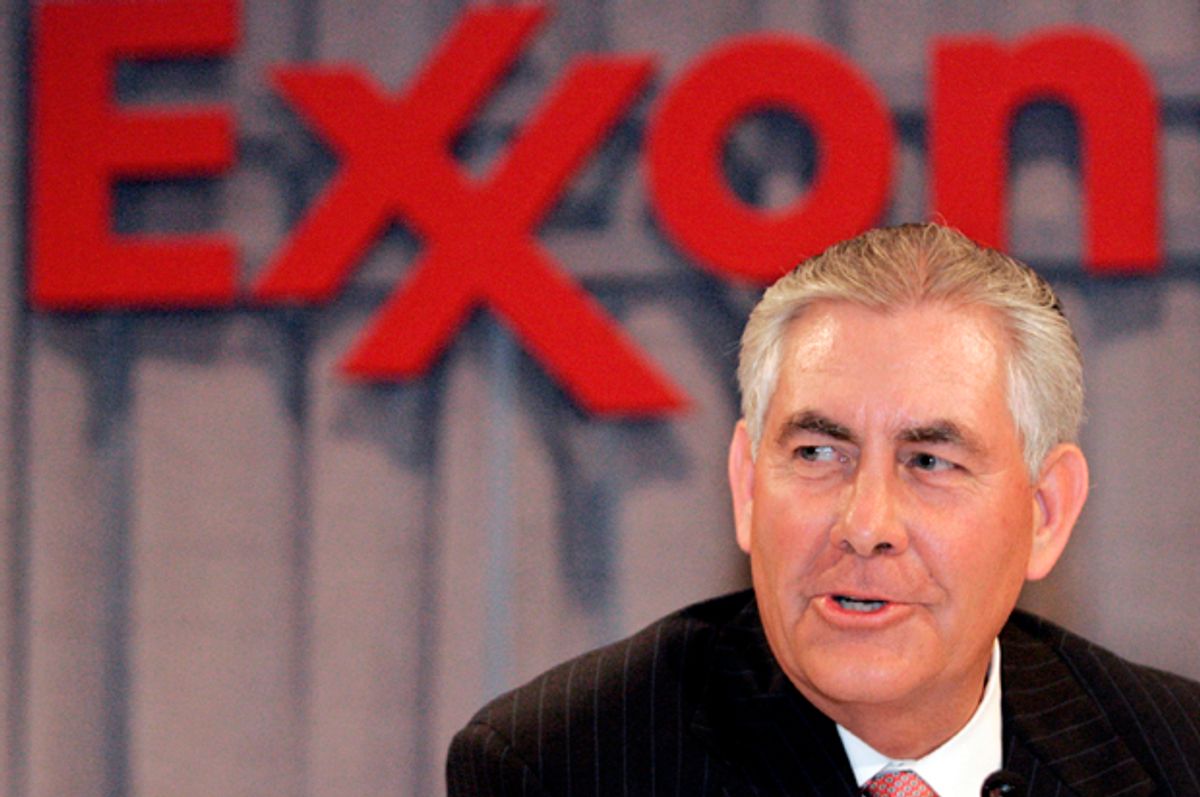 President-elect Donald Trump’s pick of ExxonMobil Chairman and CEO Rex Tillerson to become the nation’s top diplomat is bringing together sides that would normally cast wary eyes at one another when it comes to discussing the role corporate America plays in public service.

Some key Senate Republicans — led by John McCain, Lindsey Graham and Mark Rubio — have pledged to cast intense scrutiny during next month’s Senate confirmation hearings on the Texas oilman for his dealing in Russia. On the other side are progressives who recoil at the idea of a State Department headed by the boss of a gigantic oil company that has long viewed itself, in the words of journalist and academic Steve Coll, “a power independent of the American government . . . possessed of its own foreign policy.”

Tillerson built his career through inking oil deals with countries across the globe, along the way firming up ties with Russian President Vladimir Putin and Igor Sechin, the head of Russia’s state oil company Rosneft. This cozy relationship with the Kremlin comes amid Western sanctions against Russia for military interference in Ukraine and allegations by U.S. intelligence agencies that Russia helped Trump win the election by strategically leaking hacked Democratic National Committee and Hillary Clinton campaign staff emails.

Trump raised the ire of some Republicans by dismissing allegations from the very agencies he will need to depend on to make vital foreign policy decisions as president. The next secretary of state will have to help mediate any choppy internal relations caused by Trump’s remarks against his own intelligence apparatus.

If he’s confirmed, Tillerson will be first company CEO to become secretary of state, but he wouldn’t be the first with a corporate background. Hillary Clinton, who stepped down as secretary of state in 2013 in her bid for the White House, had held numerous positions on corporate boards, including that of Wal-Mart, where she was praised for pushing the company toward more environmentally sound practices but criticized for her seeming indifference to its labor policies. Condoleezza Rice, who served as secretary of state during President George W. Bush’s second term, sat on the board of Chevron, helping the oil company win a $10 billion oil deal through her relationship with Kazakhstan's dictator and president, Nursultan Nazarbayev.

Whether Tillerson’s relationship to the Kremlin is too close for comfort for some — and despite the horrid reputation of ExxonMobil among progressives and environmentalists — his experience managing an immense and complex global organization like the world’s largest non-state oil company would not be a weaknesses, according to William Becker, professor of history and international affairs at George Washington University’s Columbian College of Arts and Sciences.

“That kind of leadership is relevant to the job,” Becker told Salon in an email. “He knows world leaders — perhaps to a troubling degree to detractors [with] his close ties with Putin and his inside circle. . . . What concerns his critics is whether he can broaden his view of the world and the United States' role in it.”

And these concerns include the need for Tillerson to hit the ground running on issues pertaining to national security, matters that have become more important for secretaries of state since the Sept. 11, 2001, terrorist attacks on the U.S. and the ongoing threat from Islamist extremists. Both Clinton and Rice were deeply involved with the security information that flows constantly to the White House. Tillerson, or anyone else holding the secretary of state position, would have to develop a close working relationship with the president and smooth any speed bumps involved with the receiving of accurate and timely intelligence at the White House.

Franklin D. Roosevelt’s last secretary of state, for example, was Edward Stettinius Jr., a former high-ranking executive at General Motors and U.S. Steel. Despite his corporate ties to two of the country’s biggest companies, Stettinius was an FDR liberal who played a key role in forming the United Nations.

George Shultz, who served under President Ronald Reagan, spent time as president of Bechtel Group, a major U.S. military contractor. Shultz laid the groundwork for the end of the Cold War era and is considered by the Office of the Historian in the Department of State as one of the most important post World War II-era secretaries of state.

Becker said that World War II pushed forward an image of a leader as someone who understand how to manage large organizations and to effectively delegate authority. This gives top administration officials a chance to focus on the bigger picture and craft larger strategies while qualified subordinates handle the details — talents that effective leaders in both government and corporate America share.

Tillerson’s ties to Russia may be his undoing if just three Republicans decide he’s not the man for the job. But one thing is certain: The next secretary of state would benefit from having the kind of experience Tillerson has in running an organization so large that it’s been compared, quite unfavorably, to a sovereign state.