The great compromise that wasn’t: North Carolina's HB2 deal was doomed from the start

North Carolina's trans community needed HB2 repealed. But its members also stand to lose the most from this deal 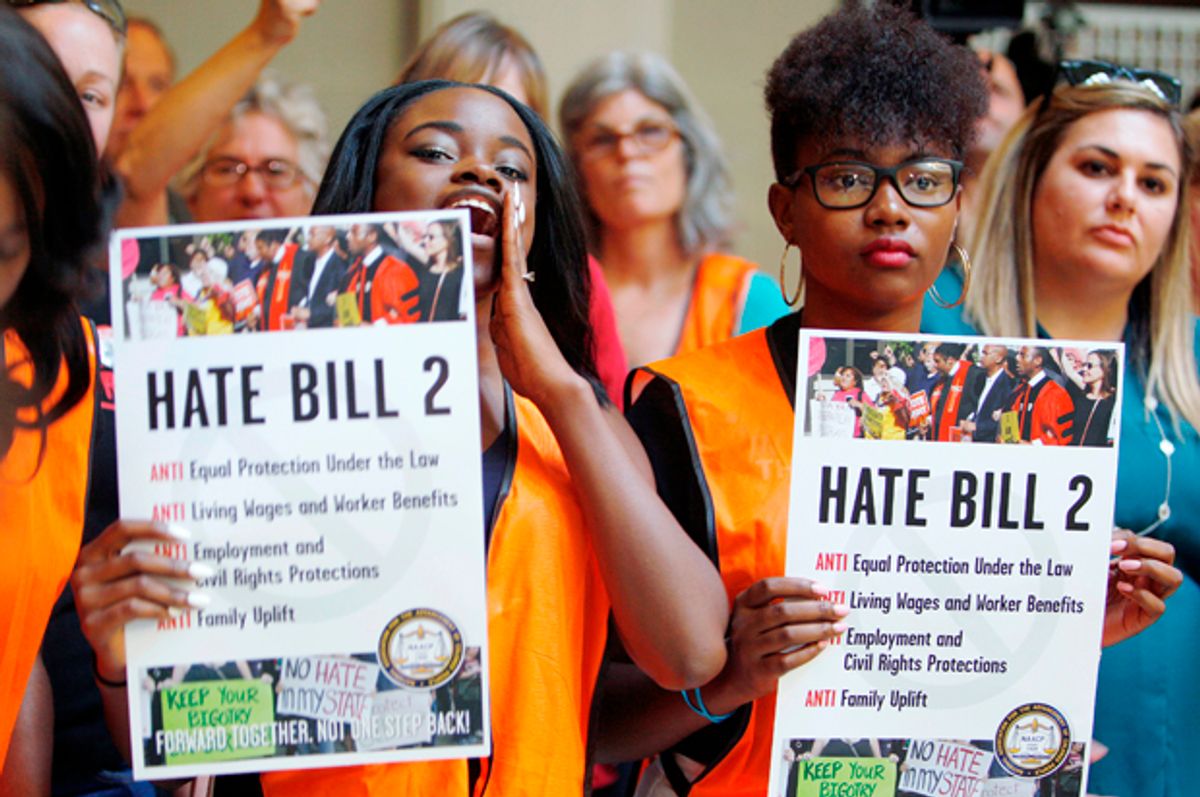 It’s the great compromise that wasn’t.

On Monday out of the blue, the Charlotte City Council voted to repeal its nondiscrimination ordinance on the condition that North Carolina's legislature strike down House Bill 2, the state’s notorious anti-LGBT law. The deal was championed by LGBT advocacy groups, including the Human Rights Campaign and the American Civil Liberties Union, as a necessary move to protect trans people who have been targeted by the state's discriminatory legislation.

North Carolina Gov. Pat McCrory on Wednesday quickly called a special session of the General Assembly, the fifth such meeting of the year, to debate the law’s repeal. It was widely believed that HB2, which forces transgender individuals to use public restrooms that correspond to the sex listed on their birth certificate and prohibits local legislatures from enacting laws to protect the LGBT community, would be struck down. Some have estimated that the controversial bill, which passed in March and was subsequently protested by businesses like PayPal and Deutsche Bank, costs North Carolina $5 billion a year.

But despite the hope that HB2 would finally meet its maker, bigotry lives on. While Democrats had hoped that the legislature would pass a straight repeal of the law, Republicans introduced an amendment to keep city councils from passing pro-LGBT ordinances for six months. Conservatives referred to it as a “cooling period.” That provision would, as Democrats argued, keep HB2 in place for 180 more days.

Unable to come to an agreement, the legislature adjourned on Wednesday night without passing a resolution on HB2. The Atlantic reported that state Democrats were furious, feeling as though they had been taken hostage by a Republican Party pushing an extremist agenda at all costs. (They weren’t wrong.)

This deal, though, was always a bad bet. HB2 should be repealed, and meaningful action on this harmful, discriminatory law, which only compounds the violence trans people face when using public restrooms, is long overdue. The problem is that striking down nondiscrimination protections in Charlotte strips much-needed protections from marginalized communities that already experience disproportionate rates of discrimination, leaving trans people particularly vulnerable.

The death of HB2 would have undoubtedly been a victory for LGBT people, but it would have meant capitulating to what Republican legislators in North Carolina have wanted all along. It’s a step forward, but one with extraordinary consequences.

By this point you’ve probably heard a lot about HB2, which has been exhaustively covered in the media since the bill became law nine months ago. But it’s worth noting that the Charlotte City Council wasn’t the first to call for a compromise on the anti-LGBT legislation. That proposal came directly from the governor’s office. Pat McCrory, who recently lost his bid for re-election, claimed in September that the legislature would discuss overturning the bill were Charlotte's City Council to repeal its nondiscrimination legislation first.

“For the last nine months, the governor has consistently said state legislation is only needed if the Charlotte ordinance remains in place,” Josh Ellis, a spokesman for the lame duck governor, told The News and Observer. “If the Charlotte City Council totally repeals the ordinance and then we can confirm there is support to repeal among the majority of state lawmakers . . . the governor will call a special session.”

Many claimed that the move was a “desperate bid” to rescue McCrory’s flailing campaign, but it wasn’t exactly. It would have played right into his hand by allowing the governor to effectively void the nondiscrimination law in Charlotte, which is what HB2 was always designed to do.

Following the surprise repeal of the Charlotte ordinance, it’s no surprise then that McCrory declared that he had won the war over public restrooms in North Carolina. Despite widespread backlash to the bill, the governor repeatedly claimed that HB2 was necessary to keep “men from entering women’s restrooms.” This is despite the fact that more than 200 municipalities have passed laws at the state and local levels that allow trans people equal access to public restrooms without any uptick in violence. McCrory nonetheless boasted that North Carolina’s legislation puts “common sense” ahead of “political correctness.”

“Now that the Charlotte ordinance has finally been repealed,” McCrory said on Monday when calling for a special session on HB2, “the expectation of privacy in our showers, bathrooms and lockers rooms is restored and protected under previous state law.” He added that the timing of the ordinance’s repeal showed that the fight over HB2 was “all about politics and winning the governor’s race at the expense of Charlotte and our entire state.”

It’s particularly telling that Republicans in the General Assembly, who control both houses of the legislature, didn’t think the original compromise went far enough. Originally Charlotte's City Council struck down the specific bathroom provisions of its nondiscrimination ordinance in order to appease conservatives worried about the mythical specter of “trans bathroom predators.” The City Council, though, still kept in place employment protections that would keep contractors working for local government from being fired on the basis of sexual orientation or gender identity.

But Republican state Rep. Chuck McGrady, told ABC News on Wednesday that the deal would be a tough sell among Republican legislators if Charlotte “did not repeal the entire ordinance.” To appease Republicans, the City Council gave them what they wanted, striking down the rest of its nondiscrimination ordinance to pave a path for HB2's demise. On Wednesday, the board voted 7 to 2 in favor of repealing equal access in public accommodations for LGBT people.

Yet some Republican lawmakers, including Rep. Jeff Collins and Lt. Gov. Dan Forest, still weren’t satisfied, continuing to stand behind a law that has done extreme economic damage to the state. “No economic, political or ideological pressure can convince me that what is wrong is right,” Forest said in a press release. “It will always be wrong for men to have access to women’s showers and bathrooms. If HB 2 is repealed, there will be nothing on the books to prevent another city or county to take us down this path again. . . . With certainty, if HB 2 is repealed, we will fight this battle all over again with another city or county. The names will change, but the national groups who are pushing this agenda will not stop until their social engineering is accomplished. The only thing stopping them are those of us who continue to stand strong.”

As ABC News pointed out, Democrats wouldn’t have needed universal support from the state’s GOP lawmakers to rescind the law — only 10 to 15 had to flip allegiances.

Although HB2 affects the entire LGBT community, it’s trans people who would have the most to gain from the bill’s possible repeal in the future — which Democrat Roy Cooper, the incoming governor, has stated is a top priority in his agenda. (A 2014 report from the Williams Institute, a pro-LGBT think tank at the University of California, Los Angeles, found that 70 percent of transgender individuals surveyed said that they been harassed or physically assaulted while using a public restroom at one point in their lives.)

But the trans community also has the most to lose in the deal. Transgender people face profound barriers to entry when it comes to housing and employment, which the Charlotte nondiscrimination ordinance was designed to help address. A nationwide survey by the National Center for Transgender Equality found that 20 percent of transgender respondents reported being denied housing on the basis of their gender identity, and it’s no coincidence that the same number — about 1 in 5 — said they were homeless at some point. These individuals will have little ability to change that if they face employment discrimination. Not only is it more difficult to find a job if you’re transgender, but also a quarter of trans people surveyed have claimed to have been let go from a position because of who they are, as the NCTE reports.

Without these protections in place at the local level, trans people living in Charlotte — who face extraordinarily high rates of poverty — will essentially go back to square one — where they started at the beginning of 2016, which isn’t a good place to be.

It is imperative that city officials find a way to fight discrimination without sacrificing crucial protections for LGBT people in the process. If this deal had passed, Republicans would have received the exact thing that they initially sought out to do, which is to nullify equality at any cost. But in doing what's necessary to capitulate to political extremists who would rather dismantle the governor’s office than admit defeat, Charlotte officials must ensure the most marginalized won’t continue to be bullied and demonized. They’ve had enough.