A great year for live music: From Wilco to Eleanor Friedberger and Philip Glass

It's a struggle to narrow the great shows I saw in 2016 down to one top 10 list, but here goes 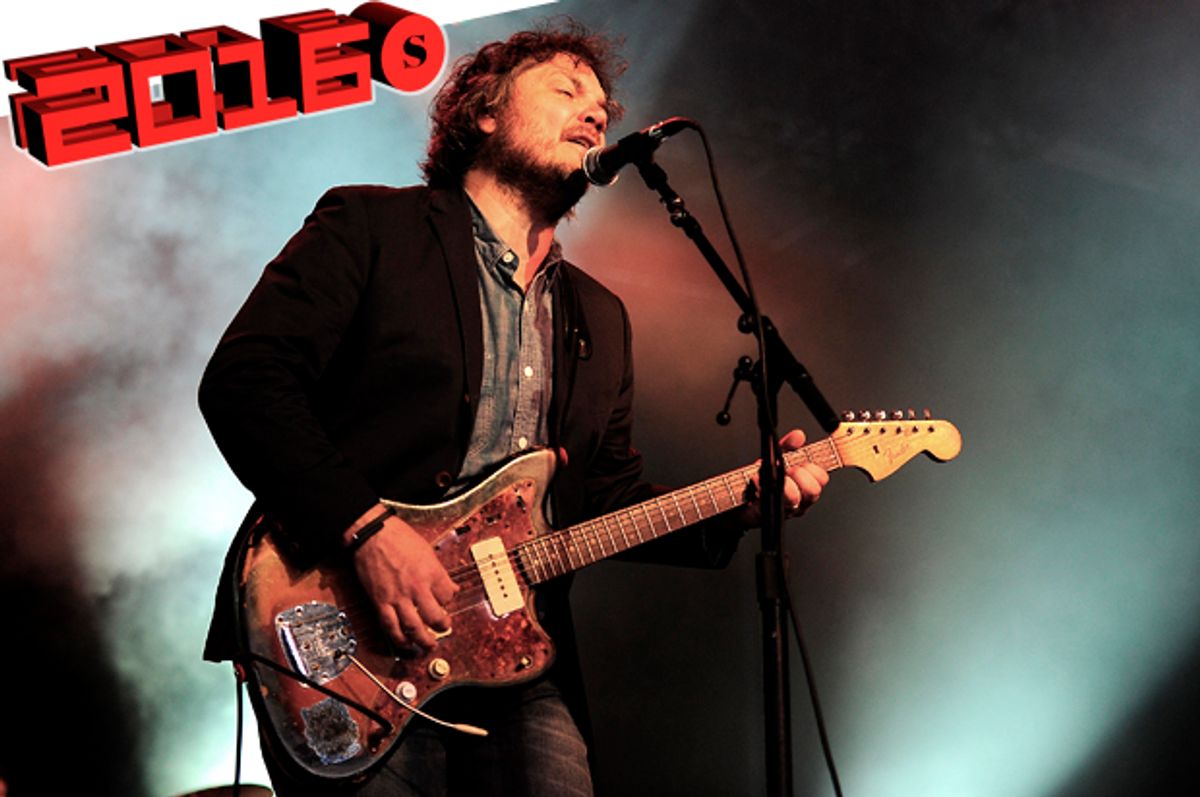 The world may be going to hell, and musicians' lives remain unstable in an age of skyrocketing rents and digital chaos. But it’s a great era for live music. When a 40-ish dad like me can see so many great gigs — even after missing Oldchella, Built to Spill, Radiohead, Television, Nada Surf, Kamasi Washington and the Jayhawks — that he has to struggle to fit the year’s best shows into a top 10 list, things are good. Here, in roughly chronological order, are a few of the highlights:

David Lowery is more than just the orneriest and most effective of artists-rights advocates. He also continues to tour and record with one of the oddest of the original '80s alt-rock bands. For this show at one of the nation’s most storied clubs (R.E.M. emerged decades ago from this club in a different location), he performed songs from the band’s most eloquent album, “Our Beloved Revolutionary Sweetheart,” from 1988, with “Eye of Fatima” and “She Divines Water.” The few extra numbers Camper Van that offered at the end were like icing on the psychedelic-folk-ska cake.

It can be hard to tell what sets Friedberger, formerly of the experimental Fiery Furnaces, apart from every other indie rock performer with Brooklyn roots. Her songs are straightforward, driving and melodic, with some lightly surreal storytelling but little of the dissonance of her old band. But between her tighter-than-hell L.A.-based backing band, Icewater, her distinctive voice and jazz-horn-like phrasing and a bizarre kind of force when approaching the songs from “New View,” she delivers a mesmerizing live show. If anyone you know champions someone like Linda Rondstadt over a genuinely assertive and eccentric artist like this, just walk away.

Well, this can be what 2016 can look like. With the audience wearing 3-D glasses, members of the dapper, robotic German band standing at what look like lecterns and cosmic images of rocket launches and postwar European bike races projected behind the group, this was surely one of the strangest looking shows of the year. And the band that made “Trans Global Express” the first big Krautrock hit in the U.S., sounded great — committed and switched on. At times it was a great rock concert with imagery, at times like the most rocking museum visit ever. And it was sometimes hard to tell which was better.

The nation's hardest-working live band is headed by Patterson Hood, who writes about his native South — its irony and historical burden — better than almost anyone since novelist William Faulkner and historian C. Vann Woodward. He also sings and plays guitar better than either of them, and the shows behind the group’s great new album, “American Band,” are becoming almost legendary. At times Hood and co-founder Mike Cooley (who wrote the timeless song “Carl Perkins’ Cadillac”) locked into a kind of south-of-the-Mason Dixon version of Built to Spill. Powerful stuff however you slice it.

5. Stew and Heidi, The Negro Problem at REDCAT (Los Angeles)

Stew and Heidi Rodewald once made up the '90s L.A. indie rock band The Negro Problem then became the theatrical duo that helmed the Broadway show “Passing Strange.” Now they are something delightfully ambiguous and in between. Their new performance, about the life and legacy of the great novelist and polemicist James Baldwin, is a mix of (polished rocklike) songs alongside improvised political rants by Stew. (One, at least at the show I saw, was about the importance of personal dissent and why “ideas matter,” should be shared at freshman orientation at every college in the land. It dovetailed with another, about Richard Wright as the Kanye West of his day.) Sheesh. This was emotionally and intellectually exhausting in just the right way.

6. Wilco at the Theater at the Ace Hotel (Los Angeles)

Should we be surprised that by now that Wilco offers a consistently good-to-great show that reaches back to the group’s mid-'90s records (in this case, “It’s Just That Simple” from “A.M.”) through the arrival of avant-garde guitarist Nels Cline (“Impossible Germany”) to recent work, typically making all of it sound fresh and new and deeply felt? With a bizarre and lovely woodland stage set and expanded arrangements of familiar songs, the band also made a strong case for its understated new album, “Schmilco.” Boy, we will miss these guys — who have been recording three times as long as the Beatles did and never seem to get tired of the stage — when they are gone.

Opening night of Glass’ opera about a pharaoh who lived 14 centuries before christ — thought to be the inventor of monotheism, which sadly for him didn’t quite take — felt like a real event. And not just because it came complete with a Black Lives Matter protest out front. (The pharaoh’s wife, Nefertiti, was performed by a black woman, but Ahknaten was voiced by a white countertenor.) Some the production and stage design — not nearly as minimalist as the music — were too busy. But much of it added up brilliantly. Glass’s music — which he composed in the early '80s, a few years after the debut of his landmark “Einstein on the Beach” — sounded as timeless as the issues illustrated by the performance.

A few days after the death of his musician brother, the artist formerly known as Bright Eyes gave an impassioned reading of his stripped-down new album, “Ruminations,” much of it performed on piano and harmonica with just a bassist providing accompaniment. His song about (among other things) Ronald Reagan, “A Little Uncanny,” is one of his best ever. And Saddle Creek’s limited-edition reissue of six Bright Eyes albums (including “I’m Wide Awake, It’s Morning”) reminds us how long Oberst — a 36-year old who’s been recording for more than 20 years — has emitted bolts of brilliance.

The chance to see a titan like Thompson in the wood-lined back room of an instrument shop, playing solo acoustic guitar, does not come along very often. In this case, the occasion was a benefit to raise funds for an ailing and beloved L.A. musician who needs money for medical bills. Despite the unpleasant subtext, the show was luminous, with two solid hours of dark, heartbreaking songs and witty between-song banter. As a bonus, Richard Thompson played the bittersweet “Who Knows Where the Time Goes” — from the Fairport Convention’s classic 1969 album, “Unhalfbricking” — as well as “Woods of Darney,” the melancholy, fingerpicked tale of two soldiers in the French countryside who pine for the same woman. Very rarely performed, “Darney” could almost be a lost Edward Thomas poem found in a dead man’s trunk.

With saxophonist Kamasi Washington, the jazz-inspired scene around the artist Flying Lotus and the Low End Theory club and other artists and venues around the edges, Los Angeles is giving New York a run for its money as a jazz capital for the first time since about 1960. A case in point is the group led by drummer Mayall (who studied with the late bassist Charlie Haden and played in Josh Haden’s rock band Spain). The group makes an eerie kind of noise vaguely related to the mid-’60 Miles Davis Quintet. One highlight was guitarist Jeff Parker, formerly of Tortoise and now celebrated for his album “The New Breed.” Parker coaxed ghostly Jim Hall-like abstractions out of his electric Gibson and added to the sense that something distinct and mysterious was happening.

Runners-up: Dave Rawlings Machine (complete with Gillian Welch) at the Georgia Theatre; an introspective set by Eric Bachmann of Archers of Loaf at the 40 Watt; deep-soul singer Charles Bradley with the kick-ass backup band His Extraordinaires at the Georgia Theatre; a fully alive psychedelic Zombies at The Rose in Pasadena, California; Car Seat Headrest channeling anti-fascist rage and post-Cohen sorrow at the Teragram Ballroom a few days after the election; Robyn Hitchcock and Emma Swift at Largo at the Coronet on John Lennon’s birthday (including covers of “Mind Games,” “#9 Dream” and “Strawberry Fields Forever”); Billy Bragg and Joe Henry telling stories and playing train songs from Lonnie Donegan and Hank Williams to Leadbelly at the Downtown Palace Theatre in Los Angeles.