Under its surface, the innocent-seeming Reagan-era classic reveals much about America's shifting racial narrative 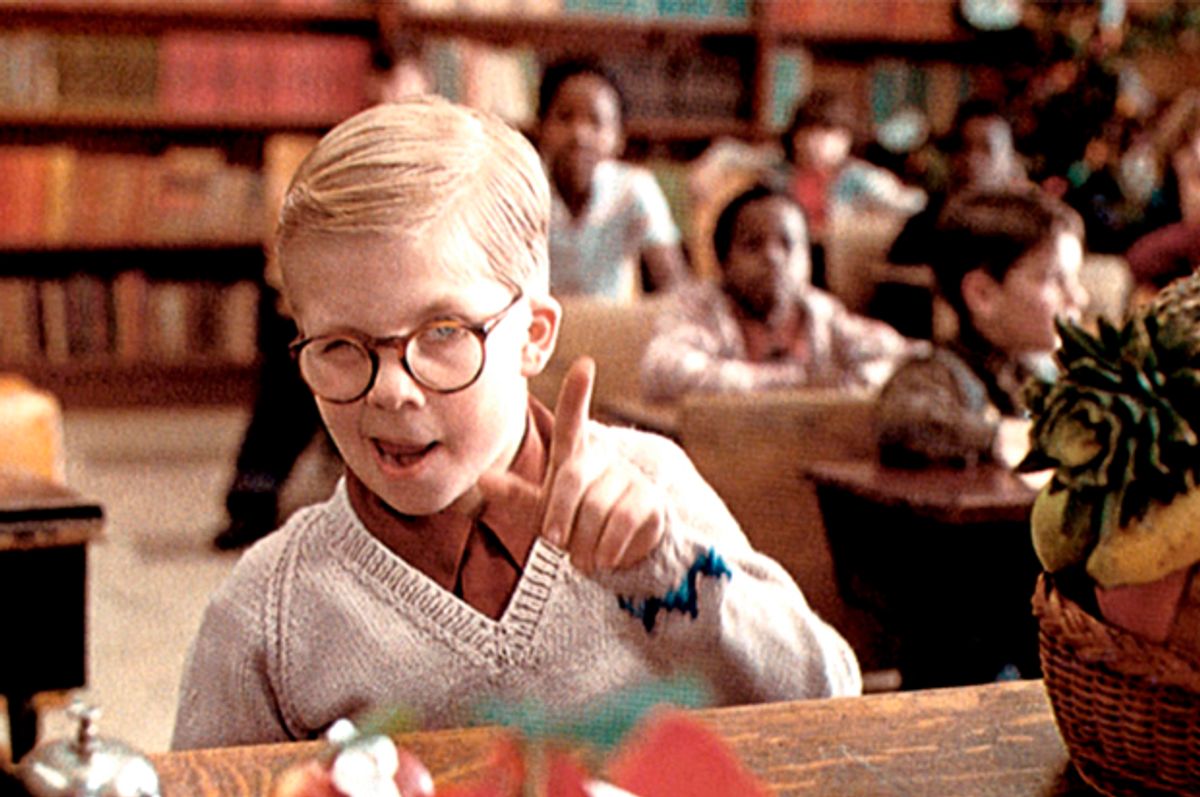 In America, the Christmas season is a time of rituals. Consumerism is worshiped. Family and friends gather to eat copious amounts of unhealthy food. Twice-a-year Christians (if you include Easter) dress up and attend church so that they can lord their supposed piety over other people during the upcoming year. There is football. And an estimated 40 million people will watch the annual 24-hour marathon of “A Christmas Story” that is shown on both TBS and TNT.

(In the interest of full disclosure: I will be switching back and forth between the "Kaiju Christmas" Godzilla marathon on the El Rey network and “A Christmas Story.”)

Film and TV are not perfect ciphers or mirrors for society. But they do reveal a great deal about ourselves and the broader community in which we live: what stories are told and which ones are not? Who gets to speak? Who is silenced? What groups are placed front and center in American — and global — popular culture? Which groups are marginalized or at the periphery? Whose experiences are erased? Likewise, whose experiences and perspectives are depicted as“normal” and “universal?” Perhaps most important, how do popular media (and pop culture more generally) help to inform how we think about our identities as human beings?

When cultural critics debate the merits of “representation,” these are the fundamental questions they focus on. But such conversations are ultimately about much more than the role of gender in the uneven, not very funny and unsatisfying "Ghostbusters" remake or how racial and ethnic  diversity (and perhaps even sexual orientation) helps make the excellent new "Rogue One: A Star Wars Story" a compelling depiction of George Lucas’ wondrous film universe. On a fundamental level, questions of representation are always debates about social and political power.

“A Christmas Story," co-written and directed by Bob Clark of “Porky’s” fame, was released in 1983. It's a dark comedy based on the semi-autobiographical short stories of Jean Shepherd, as originally collected in the book “In God We Trust, All Others Pay Cash.” While the interior scenes were mostly filmed in Cleveland, “A Christmas Story” is set in the fictional community of Hohman, Indiana, circa 1939. (Shepherd was in fact raised in Hammond, Indiana, which only sounds fictional).

The plot is straightforward: A 9-year-old boy named Ralphie is obsessed with getting a Red Ryder BB gun for Christmas. He engages in a deliberate and elaborate campaign to convince his parents to buy him that prized Red Ryder BB gun. Along the way, Ralphie negotiates with Santa Claus and his teacher, fights off a horrible bully and partakes in episodes of fantasy, melodrama and adventure.

I was about 10 years old myself when I first watched “A Christmas Story.” I laughed a lot and found it a sophisticated antidote to Christmas classics like “Miracle on 34th Street” or “It’s a Wonderful Life.” But as I grew older I realized that something was not quite right about the movie. I began to wonder — as I did while watching “Star Wars: A New Hope” when it was first released — where were the black and brown people? Where were the people who looked like me?

As bell hooks, James Snead, the late Stuart Hall and others have eloquently described, this is an uncomfortable but very common experience for people of color (as well as gays and lesbians and other marginalized groups). When you look at the screen and either a) do not see yourself represented or b) see yourself depicted as a stereotype and caricature (which is itself a type of erasure), this is a moment of awakening and loss of innocence.

Black people are present in “A Christmas Story.” There are several black children in Ralphie’s elementary school classroom and, like their white peers, they participate in pulling a prank on their teacher. There are also some black folks watching the Christmas parade. There is a black man in Black Bart’s gang, which attacks Ralphie's home in a fantasy sequence and are beaten back by his deft use of that Red Ryder BB gun.

The black characters in “A Christmas Story” are present but remain peripheral. They have no real voice or agency. They are shown in an perfectly inoffensive and neutral fashion. They are “present” in much the same way as the minor white characters who are not members of Ralphie’s family or his circle of friends. This is a perfect depiction of the nonwhite "other," tailored to the conservative and superficial “color-blind” politics of the post-civil rights era.

This is an example of the "white racial frame" in action: People of color are present in a way that does not challenge the cultural and personal psychology of white racial innocence. They are present without being objectionable or intrusive in any way; they present no threat to the way whiteness and memory combine to nurture a nostalgia for a “simpler” time that in actuality did not exist.

The stories upon which “A Christmas Story” was based were written during the 1960s and featured reflections on the supposed simplicity of white working-class family and community life in pre-World War II America. The film version of “A Christmas Story” was released in the early years of the Reagan era when a grade-B Hollywood actor turned president was trying to create a halcyon “Morning in America" as a cure for the adult responsibility and reflection demanded by his predecessor, Jimmy Carter.

These yearnings for a particular fictional version of the American past continue to loom large in 2016, as the proto-fascist Donald Trump, promising to “Make America Great Again,” won over tens of millions of angry white voters and captured the White House, apparently with the aid of his foreign sponsor, Vladimir Putin.

Writing for Literary Hub, Kristin Martin described the allure of nostalgia and its connections to the present:

In a country built on sentimental narratives — the American dream, Manifest Destiny — Trump’s call to “Make America Great Again,” with its nostalgia for a non-existent past, is clearly alluring to many Americans who feel fear and anger about the current state of our country’s economic recovery and deadlocked political system. [Wherein] ‘Sentimental Journeys’ New Yorkers bought into the narrative that “crime” was what was wrong with the city, in 2016, Trump voters are buying into a narrative that immigrants, Muslims, political correctness, and the political establishment are what is wrong with the United States.

The particular type of white nostalgia that infuses “A Christmas Story” has no interest in depicting the way Ralphie’s hometown was created by racist housing practices that denied nonwhites access to such spaces. Nor does the white nostalgia of “A Christmas Story” have any room for discussion of the real history of Indiana, a state that was one of the most powerful strongholds of the Ku Klux Klan during the first decades of the 20th century. (It is estimated that one-third of Indiana’s adult white males were KKK members during the 1920s.)

On his radio show, Shepherd even described attending a KKK picnic as a child in Hammond.

To ask hard questions about race, memory and “A Christmas Story” is difficult for many people. The "white gaze" does not enjoy being challenged. This is especially true when it comes to pop culture; white privilege and white fragility all too often result in howls of rage and anger when white folks’ fun and pleasure are disrupted by a person of color’s questions or interventions — or sometimes mere presence. “It's just a movie!” and similar rebuttals are all too often a refusal to look at what is just below the surface.

One of the greatest examples of white privilege is the ability to decide when and how you will be made uncomfortable. That even extends to those semi-conscious moments in front of the television watching “A Christmas Story” over and over again.