From magnificent tree to "nurse log": After her fall, she's still nourishing me from the forest floor 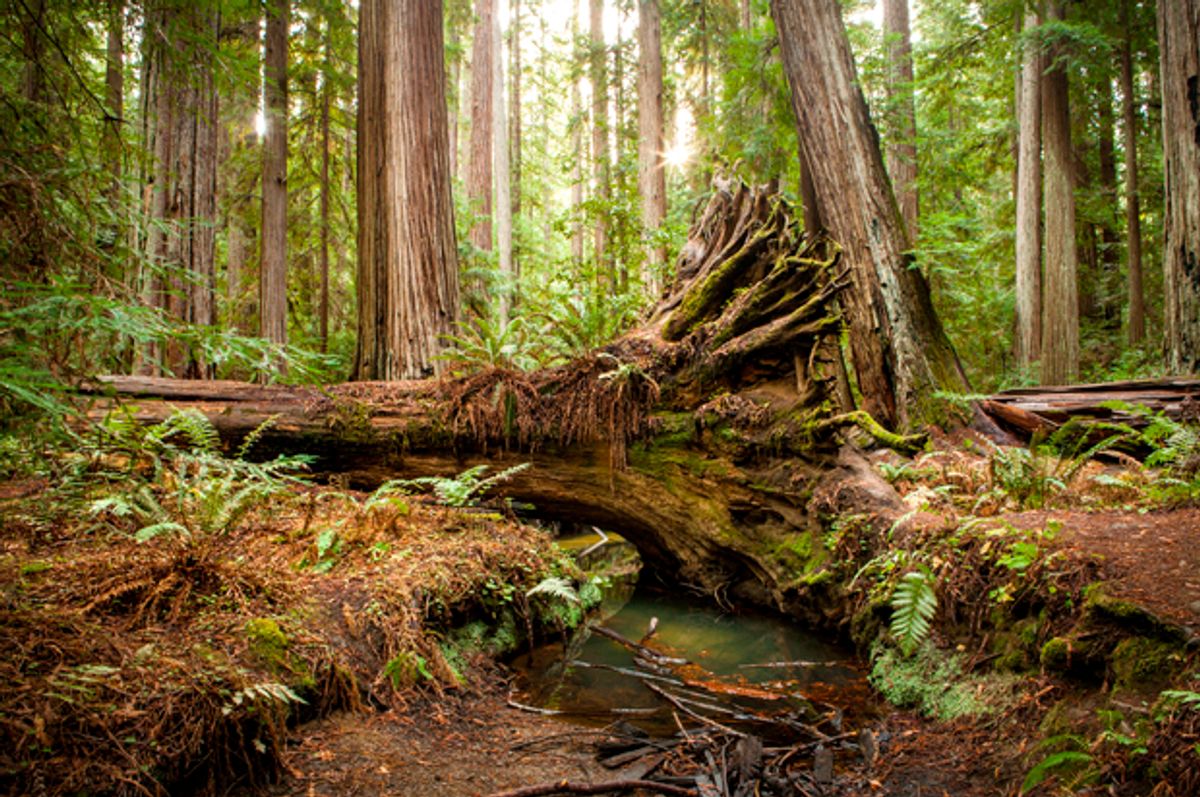 Far beyond the Christmas tree farms, in forests and ravines, lie the woolly-barked nurse logs. At first glance they are simply fallen trees: the corpses of the woods. But now they live a second, horizontal life. “Nurse log” is an arborist’s term; a fallen tree has a new role. Descended into a fungal state, it is home to insects and small mammals and food for the roots of nearby trees still soaring. For the last four years I have searched for how to describe a new-old friend of mine. I’ve settled on nurse log.

She is now 82; I’m 13 years younger. She’s been a half-mother figure in my life, someone not fully in the next generation, but a lens on a nearby future. The age gap between us feels nearly closed. But not quite: I’m still standing. She’s on the forest floor.

When she was standing, I would never have dared to say she was a friend. I knew her for 38 years in what I’d call her first life. Then suddenly, in the middle of a painting class, she was felled by a stroke. What caused her stroke was an arteriovenous malformation (AVM) in the cerebrum. An AVM is a tangle of veins and arteries that looks very much like a confusion of branches and twigs. It forms in the womb. All her life, unbeknownst to her, a branching snaggle, like the wires of an unexploded bomb, waited deep inside her brain.

The business of brains brought me to her in the first place. At 28, I thought I was going out of my mind. She was the psychoanalyst I consulted. Like an arborist, she understood deep interweaving growth, just how much time such development takes (for trees, sometimes centuries) and how ecologically interconnected events and lives are. Our relationship really seemed to exist in a kind of tree-time: nearly four decades, twice a week for the period of the worst (surviving a violent working-class family, my father’s alcoholism, my sister’s drug addiction, my mother’s depression). New routes through life — through my brain — were formed. My combo of bewilderment, desperation, and spunk reapportioned. I was nearly past my childbearing years before I lucked into a marriage to a marvelous individual whose progress was as protracted as my own — I’d known him since high school, though we didn’t actually marry till we were 45.

All upright trees photosynthesize, drawing water through their trunks to provide sugars for their crowns. They use their tree intelligence (as some arborists call it) to send signals out through their roots, warning other trees about insect invaders. Most importantly, they urge spindly youngster trees toward water in times of drought. In human terms, she did all of that for me.

My despair when she was struck down was bottomless and felt endless. I was suspended in time. So was she, hospitalized, in a land of little language, communicating through visual images, not with the immense vocabulary of a woman, Radcliffe class of 1956, who had seen it all. I heard that she was given crayons to draw with — and in rage had thrown them across the room. This plunged me into desperate mourning for the great fallen figure that she was.

After the hospitalization came the relearning of simple tasks (like how to put a key in a lock), the accommodation to language at a roundabout pace, the necessary closing of her practice, and an adjustment to always having help. And after all this, she called me. I heard her hesitation and laughter on the voice mail. Her laugh seemed to have come from far away, as if from a fallen log, suddenly animated among the decomposing leaves. With that I was drawn into her second life.

“If I couldn’t paint,” she said to me as she was turning her Manhattan living room (where she used to practice) into a tiny art studio, “I would want to die.” It was not the lives of others for her now. It was the use of a girlhood talent for art, for self-expression, for observation, that was crucial now.

What nurse logs to do is exactly that: nurse. After the long slow years when they were standing, perhaps being gradually eaten away by microbes, or snapped in ice storms, or, in rare instances, struck by lightning, they fall into this functional coda. As they turn to humus, they nourish the forest floor, providing food for countless saplings, not to mention myriad arachnids and beetles and bacteria and the small adorable mammals that provide the prototypes for children’s books. (My favorite is "Mr. Bear Squash You All Flat" by Morrell Gibson, where all the little animals of the woods, living, no doubt, in wooly nurse logs, collect to conquer an angry bear.) So fallen trees function essentially in the forest community, assuming another noble tree role.

What is my former analyst’s noble role? A new kind of nourishment. She offers me, the person she once helped to make all major decisions, a lens on how she is making her own. Once a witness to my recounted experiences, she allows me to witness hers. She’s accepted the dedicated help of her friends, her sons, her care workers, and a few ex-patients. Slowly she’s remade her life by engaging with brush and canvass. (She doesn’t paint trees, incidentally; it’s flowers.) Slowly she has worked on verbal language. Reading remains elusive. Pronouns forever confused. As I have helped her into taxicabs or guided her toward a door, she has been helping me see her own negotiations through life. Profoundly I know that a second life isn’t easy. (It’s not even easy to schedule a good haircut after a certain point in life’s complications.) But one’s nurse log existence can be lived with warmth and an intimate sense of one’s inner core.

That laugh I thought I heard from a fallen trunk? She still has the same warm, conspiratorial laughter, the same recognizable empathy.

“How long have we been friends?” she asked me not long ago, when I made my holiday call to Seattle, where she now lives. Her question provoked me to realize that there has always been a sense of friendship in these more than 40 years. Kindness was there from the beginning as we two, separated by half a generation, began to talk. Nurse log. Still feeding the roots.

Molly Peacock is the author of "The Analyst," poems about the relationship described in her essay, forthcoming from W.W. Norton and Company. She is a co-creator of Poetry in Motion on the New York City buses and subways.