Hacker house blues: My life with 12 programmers, 2 rooms and one 21st-century dream

I came to San Francisco to change my life. I found a tribe of depressed workaholics living on top of one another 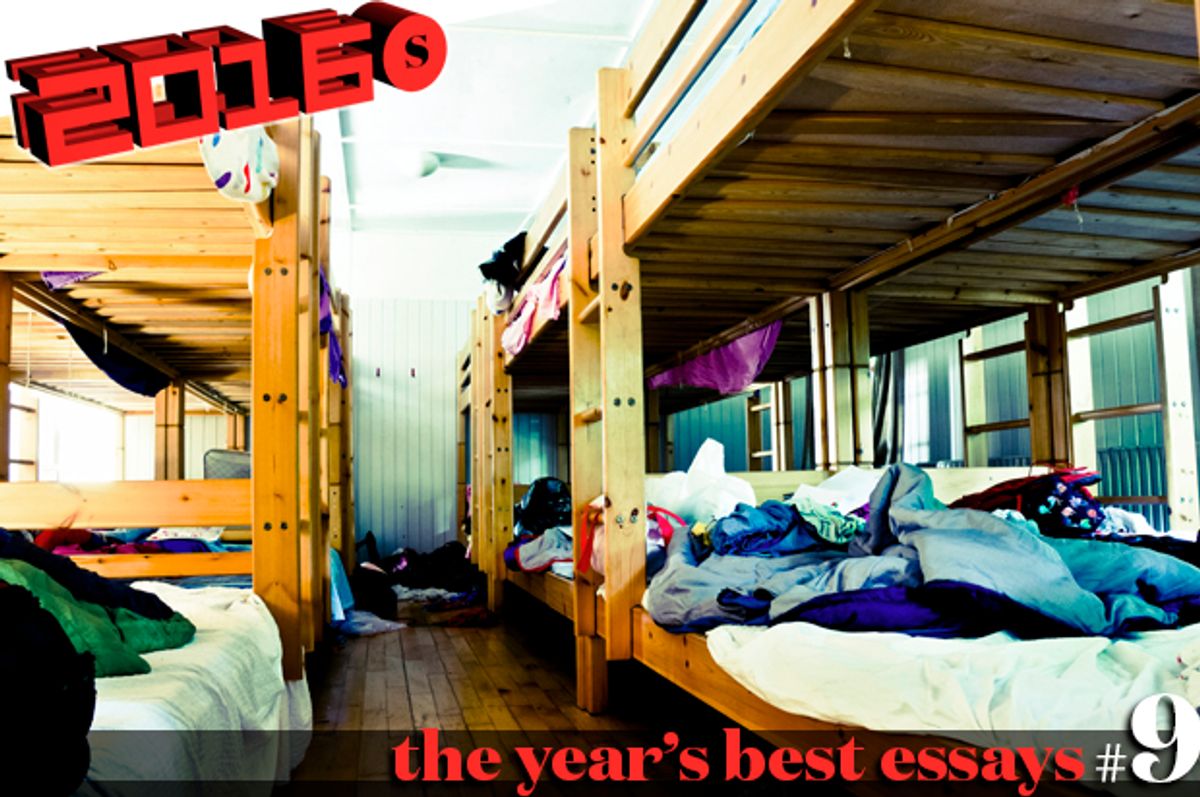 I might have been trespassing up there, but I would often go to the 19th-floor business lounge to work and study. Located on the top floor of a luxury high-rise in the SOMA district of San Francisco, the lounge was only accessible to residents of the building. Yet for a while I found myself there almost every day.

Seventeen floors below, I lived in an illegal Airbnb with 12 roommates split between two rooms. There were six people packed into my bedroom alone — seven, if you included the guy who lived in the closet. Three bunk beds adorned the walls, and I was fortunate enough to score a bottom bunk. Unfortunately, though, it was not the one by the window, which, with the exception of one dim lamp, was the only source of light in the room. Even at midday, the room never lit up much more than a shadowed cave. At most hours of the day, you could find someone sleeping in there. Getting in and out of bed was a precarious dance in the darkness to avoid stepping into the suitcases on the floor, out of which most of us lived.

In the shared kitchen, the sink more often than not held a giant pile of dishes, and the fridge, packed with everyone's groceries and leftovers, emanated a slightly moldy aroma. Mixed in there were the half-eaten meals and unfinished condiment jars of tenants who had long since moved out — all left to rot, but often too far buried in the mass of food to be located.

Let’s just say the room was not as advertised.

The Airbnb posting did boast of access to a 24-hour gym, roof deck and bocce courts. The building has an indoor basketball court, an outdoor hot tub and even a rock climbing wall. The 19th-floor business lounge alone comes with a pool table, a porch, several flat-screen TVs and an enviable view of much of San Francisco. For $1,200 a month, it all seemed worth it. The post did say it was a four-person apartment, not 13, and included a picture of a sunny room with a pair of bunk beds, but I figured for a short sub-lease while I attended coding school, it wouldn’t be so bad. The reviews, after all, were pretty positive, too: mostly 5-stars. However, none of them mentioned the fact that I wouldn’t even be given a front door key.

I’d have to sneak into the building every night. The only way I entered the building was by waiting until someone exited or entered, and then I'd slip through the door before it closed. From there I’d walk straight past the front desk guard and head to the bank of elevators. Despite my nerves, that part was surprisingly easy. The building caters to the young tech elite, so a backwards hat and a collegiate T-shirt practically made me invisible. When I got to my floor, I’d make sure none of the neighbors were watching, and if no one was around, I'd stand on my tiptoes and grab the communal key hidden atop the exit sign. Once the door was unlocked, I’d return the key to its perch for the next tenant to use.

I had moved to San Francisco to break into the tech world after being accepted into one of those ubiquitous 12-week coding boot camps. I had dreams of becoming a programmer, hoping one day I could land a remote contracting gig — a job where I could work from wherever and make a good living. My life would be part ski bum and part professional.

In my mid-20s uncertainty, the coding route seemed to have the most promise — high paychecks in companies that prized work-life balance, or so it seemed from afar. I knew the road wouldn’t be easy, but any time I’d mention my ambitions to family and friends, they responded with resounding positivity, affirming my belief that it was a well-worn path to an obtainable goal.

All of the people in that Airbnb were programmers. Some were trying to break into the industry through boot camps, but most were already full-time professional coders. They headed out early in the morning to their jobs at start-ups in the neighborhood. A lot of them hailed from some of the top schools in the country: Stanford, MIT, Dartmouth. If I was going to get through my program, I needed to rely on them, academically and emotionally. Once the program started up, I would find myself coding 15 hours a day during the week, with that number mercifully dropping to 10-12 hours on the weekends. Late at night, when my stressed-out thoughts would form an ever-intensifying feedback loop of questioning despair — What am I doing? Is this really worth it? — I would need to be able to look to the people around me as living reminders of the possibility of my goals.

Every night, the people whose jobs I coveted would come home from 10- to 12-hour shifts in front of a computer and proceed to the couch, where they’d open up their laptops and spend the remaining hours of the night in silence, sifting through more and more lines of code. Beyond preternatural math abilities and a penchant for problem solving, it seemed most didn’t have much in the way of life skills. They weren’t who I thought they would be — a community of intelligent and inspiring men and women bouncing ideas back and forth. Rather they were boys and girls, coddled by day in the security of companies that fed them, entertained them and nursed them. At home, they could barely take care of themselves.

Take for example the programmer who lived in my closet: Every night he’d come home around 9 p.m. He’d sit on the couch, pour himself a bowl of cereal and eat in silence. Then he would grab his laptop and head directly into the closet — a so-called “private room” listed on Airbnb for $1,400 a month. It was the only time I’d ever see him. The only way I could tell he was home was by the glow of his laptop seeping out from under the closet door. Hours later, deep into the night, the light would go out, and I would know he had to gone to sleep. By the time I arrived, he had been living there for 16 months, in a windowless closet with a thin mattress placed right on the floor. During the day he codes for Pinterest. Yeah . . . that Pinterest.

Maybe there were people working in this city who were living out the tech dreams of everyone else, but I’ve realized the number of people who dream about it far outnumber of people who obtain it. Everyone I spoke to in this town seemed doe-eyed about the future, even while they were living in illegal Airbnbs and working at failing startups across the city.

The odds weren’t in my favor. Most likely I’d find myself in the 92 percent of start-ups that go under in three years, trapped like some of my friends — much smarter and better programmers than I'll ever be — bouncing from failing company to failing company.

Or maybe not. Maybe I would make it, only to become like my friends who earn six-figure paychecks and still lament that they’ll never be able to buy a home here. What illusions could I continue to maintain then?

There was a good chance I’d find myself in a situation like another roommate’s. During salary negotiations for a job at a start-up, he was encouraged to accept the pay tier with a lower salary but higher equity stake. Now he works 12-hour days just to try to keep the company (and his potential payout) afloat on a paycheck not much higher than some entry-level, non-programming jobs.

The most likely scenario, however, was that I'd become like the mid-30s man who slept in the bunk above me. The reality of his situation slowly slipped him into a depressive state, until he was sleeping most hours of the day. The rest of his waking hours were spent walking around slumped and gloomy.

Programming for me was never supposed to be more than a means to an end, but that end started to feel farther and farther away. The longer I lived in that Airbnb, the longer I realized my dreams would never be met. In all likelihood I would be swept up in an economy here that traded on hopes and dreams of the people clamoring to break in. The illegal Airbnbs that dot the city can afford to charge their amounts because there is no shortage of people wanting to break in. There is another smart kid around the corner who believes that despite the working and living conditions this is just the first step to striking it big. Never tell them the odds.

I had hinged my happiness on an illusion and naively fought to get into a community that wouldn’t help me advance in the direction of my dreams. Maybe in the end I would get everything I needed or at least a nice paycheck, but I’d lose all of myself in the process. I’d be churned and beaten by the underbelly of the tech world here long before I could ever make it out.

If you are interested, it’s not that hard to sneak up to the 19th-floor lounge. I still do sometimes, despite having long since moved out and given up programming. From up there the view of San Francisco takes on the artificial quality of a miniature model. To the north, you’ll see a sea of tech start-ups, their signs and symbols a wild mash of colors. From this distance, it can all look so peaceful. Just know that somewhere in that view is another “hacker house” with bright kids living in almost migrant-worker conditions. Somewhere out there is a coding boot camp with slightly inflated numbers, selling a dream. Their fluorescent halls and cramped bedrooms are filled with the perennially hopeful looking to take the place of those who have already realized this dream isn’t all it’s cracked up to be.

It is a beautiful view, though. Just one I no longer want for myself.

David Garczynski has lived in the Bay Area for one year now. In that time, he's lived in an illegal Airbnb, on his cousin's couch, in two short-term subleases, and has been evicted once. He just signed an official (and legal) lease last week.