Russia messed with our election! America would never do anything like that, right?

Given the long U.S. history of overseas intervention, Putin's election hack could be seen as historical payback 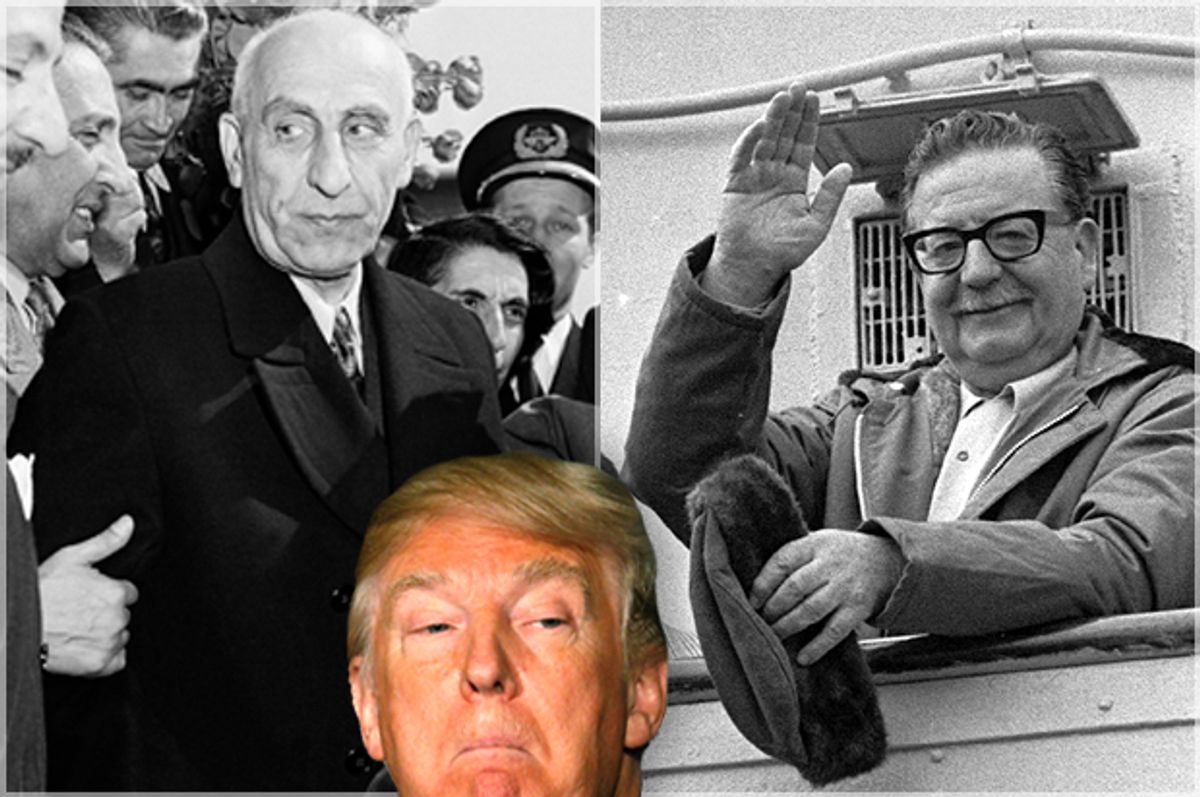 In the aftermath of Donald Trump’s upset victory in the presidential election, Hillary Clinton and her aides have done their best to get control of the post-election narrative. But in doing so they continue to exhibit the same blind spot that made it possible for Donald Trump to scale the once formidable blue wall in places like Iowa, Michigan, Wisconsin and Pennsylvania to claim the presidency.

Clinton surrogates have asserted that her loss was the result of two “unprecedented factors”: Russian hacking of her campaign and the Democratic National Committee as well as FBI director James Comey’s announcement, just a few days before the election, that his agency had more materials to review on Clinton’s supposed email scandal.

Clinton’s assertions came at a "thank you" event in New York for major donors. The former secretary of state said that Russian president Vladimir Putin had targeted her campaign and the DNC for hacking because he had “a personal beef” with her for Clinton's 2011 claim that Russia’s parliamentary elections were rigged. “We are well beyond normal political concerns here," she said. "This is about the integrity of our democracy and the security of our nation.”

In a Washington Post opinion piece, John Podesta, former chair of the Clinton campaign, lambasted the FBI for discovering the Russian attack in September 2015, as the New York Times has reported, yet failing to send an agent to warn DNC officials. Instead, the FBI left voicemail messages for a DNC computer technician.

As a former head of the FBI cyber division told the Times, this is a baffling decision: "We are not talking about an office that is in the middle of the woods of Montana.” What takes this from baffling to downright infuriating is that at nearly the exact same time that no one at the FBI could be bothered to drive 10 minutes to raise the alarm at DNC headquarters, two agents accompanied by attorneys from the Justice Department were in Denver visiting a tech firm that had helped maintain Clinton’s email server.

Nowhere in the mix of after-action Clinton reflection is the reality that Trump carried a third of the 700 counties that President Obama carried in 2008 and 2012. In states like Iowa, Michigan, Wisconsin and Pennsylvania, where this happened, there has been no real economic recovery. As documented by the Center for American Progress, a prolonged foreclosure crisis was still depressing home values in those places.

Even in defeat the Clinton forces remain oblivious to the motivations of voters who had voted for Obama twice but felt that after eight years they were worse off and voted for Trump. But the Clinton deflection is only part of the problem with the current debate over allegations that Russia covertly tried to influence the outcome of our elections. Depicting the United States as a hapless victim of the ruthless Russian cyber-bear is ahistorical, and ignores the decades when the U.S. did similar things and worse all around the world.

The FBI and CIA have a long track record of covertly manipulating politics both here and abroad and much of it remains classified to this day. While the Clintonistas may want a full disclosure of the FBI’s internal process involving her private email server, I am still holding out for the long-promised declassification of all the JFK assassination files.

None of this gives Vladimir Putin a pass. We don’t see enough reporting on the repression of religion and the media inside Putin’s Russia. But failing to acknowledge our own dark side when it comes to internal and external covert operations to twist political outcomes makes us look hypocritical in a world where so many nations have been victimized by our covert machinations, often with deadly consequences.

Evidently, this is the real-world meaning of "American exceptionalism," where only we are exempt from the requirement to respect other nations' sovereignty. There’s no better example of this than the 2014 Edward Snowden revelations that the U.S. had spied on many other countries, even allies like Germany, France, Italy and Japan.

There is also the overt overseas business through which the American professional political class makes them vast sums of money, advising business-friendly foreign candidates in numerous countries how best to win elections. This was depicted on the big screen in the Sandra Bullock movie “Our Brand Is Crisis,” based on Rachel Boynton's 2005 documentary of the same name.

For decades both Democrats and Republicans working for Washington law firms and global crisis management outfits like Hill & Knowlton or Black Manafort & Stone have helped the world’s most brutal and oppressive regimes hang on to power and marginalize their opponents, all while continuing to get U.S. military aid. Back in 1993 the Center for Public Integrity’s “Torturer’s Lobby” mapped out how the likes of Jonas Savimbi used this netherworld of creepy crawlers to help fund his brutal campaign in Angola, which employed child soldiers and deployed so many land mines it created an army of civilian amputees of all ages.

According to Howard Zinn’s “People’s History of the United States,” early on in its history our nation started picking geopolitical winners and losers:

[America] had opposed the Haitian revolution for independence from France at the start of the nineteenth century. It had instigated war with Mexico and taken half the country. It had pretended to help Cuba win freedom from Spain, and then planted itself in Cuba with a military base, investments, and rights of intervention. It had seized Hawaii, Puerto Rico, Guam, and fought a brutal war to subjugate the Filipinos.

Between 1900 and 1933, the United States intervened in Cuba four times, in Nicaragua twice, Panama six times, in Guatemala once, in Honduras seven times.

In 1953 the U.S. helped oust Iran’s democratically elected prime minister Mohammed Mossadegh, because our British allies didn't want Mossadegh to nationalize that nation’s oil. We installed the Shah, whose decades of brutal rule set the stage for the rise of the Ayatollah Khomeini and the Iranian theocracy.

The U.S. has manipulated the internal domestic politics of other countries with escapades in Africa, Asia, Central and South America, the Caribbean and even in Europe, as University of Massachusetts scholar Paul Musgrave wrote in the Washington Post:

In 1948, U.S. policymakers feared that Soviet-backed communists would win power in Italy. In response, as John Lewis Gaddis discusses in "The Cold War: A New History," the role of the newly created CIA was extended beyond intelligence-gathering to allow the agency to funnel money and organizational support to pro-U.S. parties. American assistance may have included forging documents to discredit the Communist Party.

After Washington’s favored party won the Italian elections, such interventions became a staple of global-power politics. Political scientist Dov Levin estimates in International Studies Quarterly that Washington and Moscow intervened in a third country’s elections 117 times between 1946 and 2000.

In 1975, investigations by the Church Committee in the Senate and the Pike Committee in the House documented that the CIA had tried to assassinate Cuban leader Fidel Castro (many times) as well as other foreign leaders.

As Zinn recounts, the CIA — with the collusion of a secret "Committee of Forty" headed by Henry Kissinger -- had worked in the early 1970s to “destabilize the Chilean Government headed by Salvador Allende, a Marxist who had been elected President in one of the rare free elections in Latin America.”

In a recent New York Times op-ed entitled "Now America Knows How Chile Felt," Ariel Dorfman wrote that despite the millions of dollars spent by the U.S. on “psychological warfare and misinformation” Allende, a democratic socialist, was elected on a platform of social and economic justice.

Yet Chile “was rife with rumors of a possible coup” because, Dorfman writes, “it had happened in Guatemala, and Iran, in Indonesia and Brazil, where leaders opposed to U.S. interests had been ousted, now it was Chile’s turn.”

The manipulation of politics by our intelligence apparatus did not stop at our borders but reached deep into our national politics. In the aftermath of Watergate and the assassinations of John F. Kennedy, Robert Kennedy, Martin Luther King and Malcolm X, as well as the publication of the Pentagon Papers, which offered an inside view of our government’s duplicity on the Vietnam War, it became politically possible to try and hold the government accountable.

We subsequently learned about the FBI’s infamous surveillance program COINTELPRO — short for Counterintelligence Program — which, according to the agency’s website, started “in 1956 to disrupt the activities of the Communist Party of the United States. In the 1960s, it was expanded to include a number of other domestic groups, such as the Ku Klux Klan, the Socialist Workers Party, and the Black Panther Party.”

No litany of federal law enforcement and intelligence agency abuses would be complete without mentioning FBI director J. Edgar Hoover’s maniacal fixation on destroying Dr. Martin Luther King Jr. as an effective leader of the civil rights movement. Hoover used electronic surveillance (sanctioned by the Kennedy administration) along with covert efforts to undermine King’s personal life, using his extramarital liaisons as leverage. Much of that remains classified.

For many years the FBI covertly infiltrated political groups on the left, inserting informants and creating forged documents. FBI agents or their proxies staged at least 92 burglaries between 1960 and 1966 alone.

As Zinn documents, the Church Committee learned that the CIA maintained a covert domestic network of several hundred professors, administrators and graduate students on over 100 college campuses who acted as eyes and ears for the agency. During the postwar decades the CIA published close to 1,000 books, which were seen as “the most important weapon of strategic propaganda.”

We rarely get a glimpse behind that black curtain unless an Edward Snowden or a Daniel Ellsberg puts everything on the line to pull it back for us. None of that excuses the Russian attempt to meddle in an American election, but we should not feign innocence Trying to shape world events and our own politics through fake news, disinformation, deceit and deception are as American as apple pie.