Dreaming of a dark Christmas: Decoding the seasonal iconography we take for granted

A blonde Virgin Mary? Stockings filled with gifts? Here's why we see Christmas the way we do 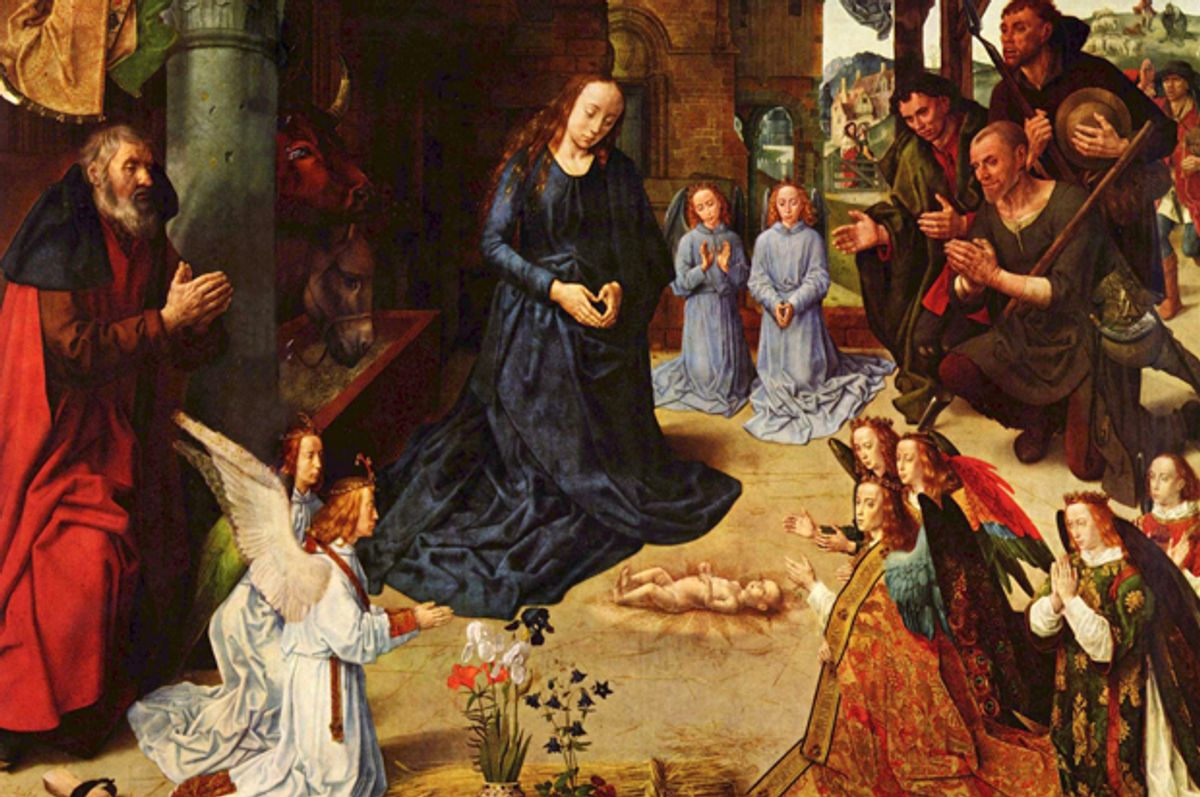 It’s the most wonderful time of the year, right? I agree, but only at a distance. With “Home Alone” on in the background, twinkling lights on the tree, the smell of clove-studded oranges and eggnog, a fat guy in red pajamas wearing an itchy fake beard grumbling “ho-ho-ho” as he tries to entice children to sit on his lap, it’s a winter wonderland, for sure. But not to burst anyone’s Christmas bubble, the details of the holiday are a good deal less jovial (and perhaps more interesting) than most realize.

Let’s get this out of the way: Christmas long ago ceased to have anything to do with Jesus being born. Sure, we’ve got those Christmas carols, but Santa Claus is the main attraction, the holiday’s protagonist. This is fair enough, historically, because there is just about a 1 in 365 chance that December 25 was the historical Jesus’ actual birthday. There is no evidence in the Bible to suggest it — in fact, early Christian leaders argued about when it should be celebrated. A documented dated to 243 A.D., excavated in North Africa, marks his birthday as March 28. Clement suggested November 18.

There are a few reasons why December 25 is extremely unlikely to have been his birthday. Joseph and Mary were headed to Bethlehem because the Roman rulers of the region obliged all residents to participate in a census. Those were not called in winter, when travel was difficult and fewer people could make the journey to local municipalities where the information was collected. Then there's the Bible saying that shepherds were watching over their flocks the night of Jesus’ birth. But late December nights are cold, so flocks and shepherds are unlikely to have been out then. Autumn is a more probable time, if we are to take the Bible as literal (which, as any scholar will tell you, is a dangerous idea), because Saint Elizabeth, the mother of John the Baptist, was six months pregnant when Mary became pregnant with Jesus. The Bible offers more information on John’s birth: Luke 1:8-13 tells that John’s father, Zacharias, a priest in the Temple in Jerusalem, was engaging in rites at the temple that are linked to the period of June 13-19, when he returned home and Elizabeth became pregnant. Nine months later would be March, and if John was six months older than Jesus, then Jesus would have been born in September.

For the content of most nativity scenes, we do not have the Bible to thank, but rather Saint Birgitta of Sweden, a 14th century nun who wrote of her visions. It is her description of the nativity scene that has been adapted by most Renaissance artists, and appears today in the countless crèches that abound the world over. It makes sense that a newborn would be swaddled and blanketed, but if you’ve ever seen the infant Jesus lying on the ground with rays of light spraying from his body, that’s thanks to Saint Birgitta. This was particularly popular for Baroque painters, who enjoyed the drama of chiaroscuro: the play of light emerging from darkness, in which they used the glowing baby Jesus as the main internal light source of the painting. A blonde virgin? You can’t fault a Swedish saint who has never been to Palestine for imagining a Swedish Mary. A single lit candle? Symbolic of the presence of God as the father of Jesus.

The ox and the donkey are described not in the New Testament but in the Old (Isaiah 1:3 “The ox knoweth his owner, and the donkey his master’s crib.”) They were described by Saint Augustine as representing the Jews (the ox) and the pagans (the donkey) who would be freed from their burdens by Jesus’ birth. They are present even when Mary is not. In fact, Mary was not standard in nativity scenes until after the 5th century Council of Ephesus, in which it was determined that she should be included. You can occasionally spot a little devil in a nativity, Adoration of the Magi or Adoration of the Shepherds image, such as the "Portinari Altarpiece" by Hugo van der Goes, which is the textbook example of a Christmas painting a la Saint Birgitta. The devil hovers above the ox and the donkey to tempt them to remain with their own religions, rather than see Jesus as the way forward (and of course the Devil was already planning Jesus’ demise, even as he was born).

The gifts of the Three Kings seem innocuous at first. But only at first. They are, in fact, extremely macabre things to give a newborn, as they are all associated with burial rites. Frankincense is scattered to mask the smell of a corpse’s decay. Myrrh is an intoxicant, which was offered to those sentenced to crucifixion, essentially to make them stoned so they'd suffer less. According to John 19:39, 100 pounds of “myrrh and aloes” were brought by Nicodemus to wrap Jesus’ body before burial. It was even used by ancient Egyptians for embalming mummies. And gold coins were placed on the eyes of the dead, as ancient Greeks thought that these coins would be used to pay Charon to row the dead soul across the River Styx, into the afterlife, referred to as “Charon’s obol.” As I said once in the past, this is the equivalent of rocking up at a baby shower with gifts of a tombstone and a shovel. The theme of these gifts is no coincidence: Theologically speaking, the only reason for Jesus’ creation by God was to die —, and in dying, reverse Original Sin. So the original Christmas gifts are just a reminder of Jesus’ raison-d’être.

So if Jesus is not the protagonist of Christmas, what’s with this Santa Claus guy? Where I live, in Slovenia, there are three Santa Clausian figures (which makes things very confusing for my daughters, trying to explain why three nearly-identical white-bearded, gift-bearing men show up within a few days of each other and have different names).

On December 5, we have Sveti Miklavž, Saint Nicholas (Dec. 6 is his feast day). The third-century Bishop of Myrna is the patron saint of children, which may explain why he is the gift-bringer (though he’s also the patron saint of brewers, pharmacists and pawnbrokers). Among the legends surrounding him: During a famine, an evil butcher supposedly murdered three children for meat and cured them in a barrel, to sell as ham. Saint Nicholas disapproved and brought them back to life. Yeah, I know ... Merry Christmas! A lighter story tells of his hearing that a poor old man felt compelled to prostitute his daughters, but Saint Nicholas entered the house by night and secretly placed bags of coins there to save the girls from this fate. I guess that’s a (very) rough equivalent to Santa placing gifts under your tree (the Christmas tree being a pagan Scandinavian tradition, in case you have any more bubbles that want bursting).

Around December 15, we have Dedek Mraz (probably unrelated to singer Jason Mraz, his name translates roughly to “Grandaddy Cool,” which would be a great name for a funk band). During Communist times, religion was sidelined, but even ardent Socialists wanted something Christmas-y to celebrate. So the powers-that-be invented Dedek Mraz, a Socialist Santa concocted around 1930, who would visit factories and bring gifts to children of the proletariat.

Then there is Bozicek, Santa Claus, whose iconography comes from … wait for it … Coca-Cola ads from 1930. An artist named Fred Mizen painted an ad, featuring the world’s largest soda fountain at the time, in the Famous Barr Co. department store in St. Louis. It showed a fat, red-suited, white-bearded Santa Claus drinking Coke from a glass bottle. This ad appeared in the very popular Saturday Evening Post in December 1930. The following year, the Coca-Cola company hired the D’Arcy Advertising Agency to develop a campaign inspired by Mizen’s painting. They called upon artist Haddon Sundblom to produce the images, and it is his illustrations that gave the world the symbol of Christmas. Let’s hope Jesus doesn’t mind.