Gift of the fungi: Mushrooms — yes, mushrooms — could help save the world

What can't mushrooms do? From cleaning chemical spills to mitigating topsoil loss, they're nature's unsung heroes 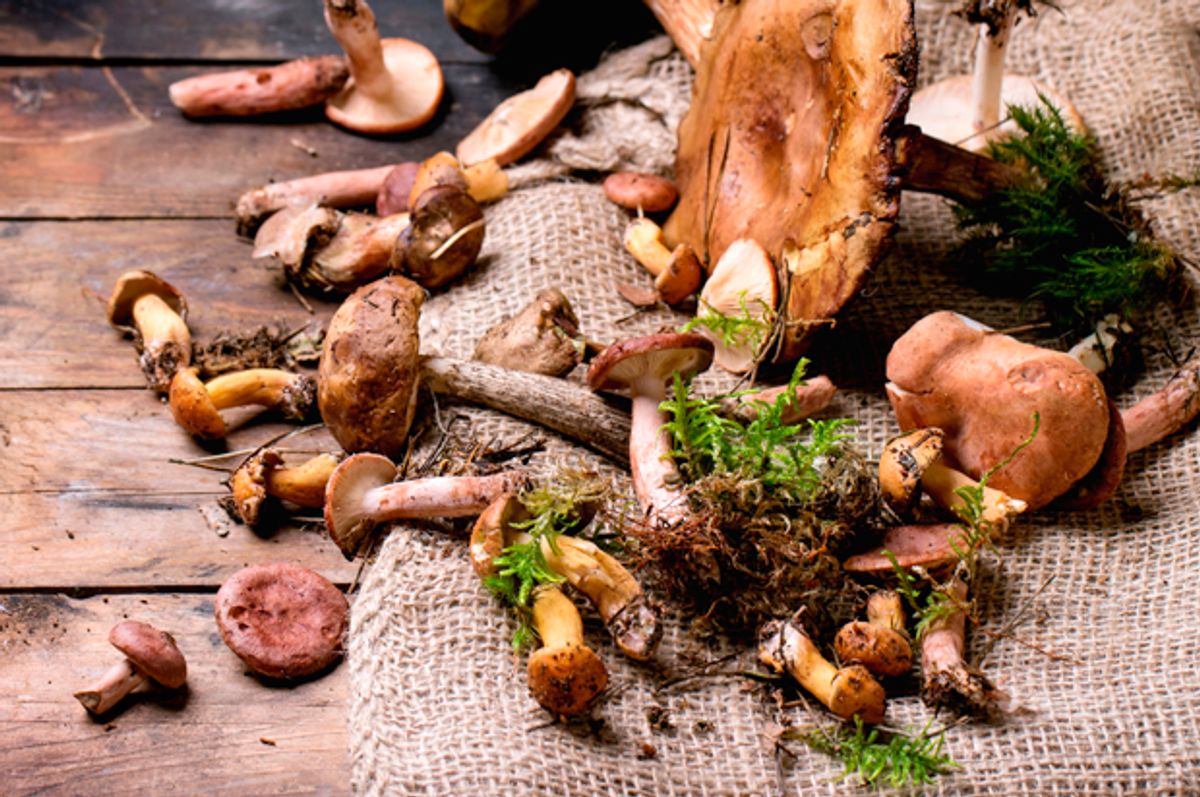 Earlier this month, mushrooms momentarily sprouted into the news when two studies from Johns Hopkins and New York University found that a single magic mushroom trip (a mushroom with the naturally occurring psychedelic ingredient psilocybin) produced immediate, substantial and prolonged improvements in the levels of anxiety, depression and hopelessness for cancer-stricken patients. The studies also noted significant increases in quality of life, life meaning and optimism for participants. Though studies measuring the effects of a positive mental outlook on fighting cancer are largely inconclusive, it was nonetheless a positive development in treating the mental suffering of cancer patients. It was also a short yet stark reminder of the repetitive, tiresome coverage of mushrooms in the media and the small, unimportant space they occupy in our collective minds — and a reminder backed by history, a grassroots movement and a burgeoning mass of scientific research that we might be missing the mark on mushrooms.

When most people think of a mushroom, they think of a soft-tissue cap sprouting from the ground. But a more correct way to understand mushrooms is to think of them as the fruiting body (e.g., an apple) of the fungus, and the fungus as the larger organism (e.g., an apple tree) that produces the mushroom. The mushroom serves as the reproductive part of the fungus, while the fungus below, in the form of threadlike branches called mycelium, absorbs water and nutrients for food. Thus, what you see above the ground and probably picture when you hear the word mushroom is really only a small part of the overall fungus. It is within this fungus below, the mycelium, where much of its value and potential lies.

Around 3 billion years ago, before plants or animals existed, fungi and mushrooms covered the earth, paving the way for more complex organisms and eventually humans to evolve. But up until 1959, there was no scientific distinction between fungi and plants (now there’s an entire “Fungal Kingdom”). Forgotten and hidden in the shadows, our knowledge of and appreciation for their importance in Earth’s history and ecosystems were stunted. So too was our understanding of fungi's vast potential. And while new literature and a grassroots movement/network are working to change the narrative, led by people like Peter McCoy, who explores the extensive history, science, applications and potential of fungi in "Radical Mycology: A Treatise On Seeing & Working With Fungi" (and is the founder of Radical Mycology, a website/network with annual conferences for amateur mycologists), there’s still a long way to go.

“They’re completely off our radar,” McCoy told Salon over the phone last week. “We don’t talk about, think about, learn about, see them on TV, read about, hear about them at all. It’s easy to dismiss them and forget about them, not put much thought into it.... It’s my duty, and a lot of people I work with, to transcend that state, that knowledge gap in our culture.”

The knowledge gap, it turns out, is enormous.

“We’ve only named less than 5 percent, perhaps even less than 1.5 percent, of the species of fungi and mushrooms out there,” said McCoy. “It seems pretty clear that they’re super important but I think the depth of that is going to be even more profound as we learn more.”

As you read about fungi’s role in our ecosystems, it’s hard to imagine how much more profound it can get. Fungi serve more roles than mycology may ever identify and understand fully, but the list is already overwhelming: connecting the root systems of individual plants into a vast network, allowing plants to take in nutrients, minerals and water from afar (akin to the human circulatory system); creating soil structure and stability, mitigating the effects of erosion and topsoil loss, (similar to human connective tissue); suppressing pathogens and bacteria within the soil (like the human lymph system). They’ve been described as “nature’s Internet” by some, and as “the neurological network of nature” by Paul Stamets, noted mycologist and author of "Mycelium Running: How Mushrooms Can Help Save the World." And that’s barely scratching the surface.

Fungi grow on things we consider waste, including old wood chips, leaves, straw, cardboard, brewery waste and coffee grounds. They break down bedrock and organic matter in soil, releasing minerals and creating healthy topsoil (the importance of which can’t be overstated). Some species of plants and certain trees cannot grow without the presence of a specific type of fungus (mycorrhizal fungi). For example, it’s been discovered that some mycorrhizal fungi provide nutrients to young saplings, keeping the saplings at a certain height until an older, taller tree dies and falls. Then, with the newfound sunlight on the sapling, the fungi shunt large amounts of nutrients to them, allowing the saplings to grow quickly, fill the void and reach the light. They can also shunt nutrients away from troublesome trees if needed, slowly killing them off.

“They basically farm their own trees,” says Hayden Stebbins, who was introduced to mycology while pursuing a master’s degree in Sustainable Horticulture and Food Production at Schumacher College, and is the founder of Hayden’s Harvest, an organization that offers guided forages in the woods that culminate in a prepared meal utilizing the foraged materials (including mushrooms). “They really are kind of managing the forest around them.”

Then, there are mushrooms’ nutritional and medicinal properties. High in protein and dietary fiber and low in fat, cholesterol and carbohydrates, certain mushrooms possess anti-carcinogenic, anti-inflammatory, anti-hyperglycemic and immunomodulatory properties. But perhaps its most important function, and the one we know the least about, is all tied up in one word: mycoremediation.

“By and large, fungi, maybe apart from mountains and giant pieces of rock, will digest, dissolve, recompose, redistribute, recycle and reinvigorate [everything we’ve created],” McCoy said. “They do that slowly and subtly but they’ve been doing it for eons. They’ve been doing this almost since the beginning of the planet. After civilization falls, all our debris will become fungal food at some point, even the plastics.”

As lead cultivation advisor on a mycoremediation project to clean up oil spills in Ecuador, the most biodiverse country in the world, McCoy has seen firsthand fungi’s ability to break down pollutants, too. Using digestive enzymes to break down complex hydrocarbons into simple carbohydrates for food, fungi can degrade dioxin, DDT, TNT, PCBs, PAHs and chemical dyes, and can trap and digest harmful microorganisms like E. coli.

It’s neither as hard nor as technical to carry out some of these techniques as you think, either. By simply inoculating a straw bale or wood-filled burlap sack with mycelium until it’s completely consumed by the fungi, then submerging it in contaminated water, you basically create a fungal water filtration system that traps and degrades heavy metals and biological hazards. That’s where the importance of educating individuals and the public at large about mushrooms’ uses and remediation potential, instead of just its psychedelic properties, steps in.

“The future of mycology is in the hands of the amateur,” said Stebbins. “We’re at the kind of garage stage that the tech industry was at. People tinkering with their owns tools in their own backyards are going to be the ones who are making the bigger discoveries.”

McCoy agrees. “We’re in an incredibly early stage.” The key now, McCoy believes, is spreading the information, and inspiring a new wave of amateur mycologists to push the movement forward.

“A couple years ago, I remember having this good conversation with my friend. We were talking about this and he’s like ‘Are we crazy? Are we making this up? Are we seeing something that isn’t there because we want to see it?’ He was trying to be really hard on himself and pick it apart and just really couldn’t find a hole in this argument.”

McCoy continued, “I think the great thing about mycology is that it answers so many of our problems and so many of our perceived problems. I always put the word ‘waste’ in quotes because we can grow fungi off of almost everything. The waste product of growing mushrooms is basically soil. . . . It’s a paradigm-shifting notion. It’s a rabbit hole. It’s not just practical, it’s compelling, which I think is this other element that you can’t buy.”

There have been five mass extinctions in planet Earth’s history. Someday, there will be another. As we continue to fill the world with more waste and pollution, our ability to utilize fungi to combat it could determine whether the next extinction comes from humankind’s actions or some unforeseen event. But regardless of the why or when, fungi will be there to clean it all up eventually and, most likely, recolonize the world.