A media resolution for 2017: Stop asking clueless celebrities to comment on race relations 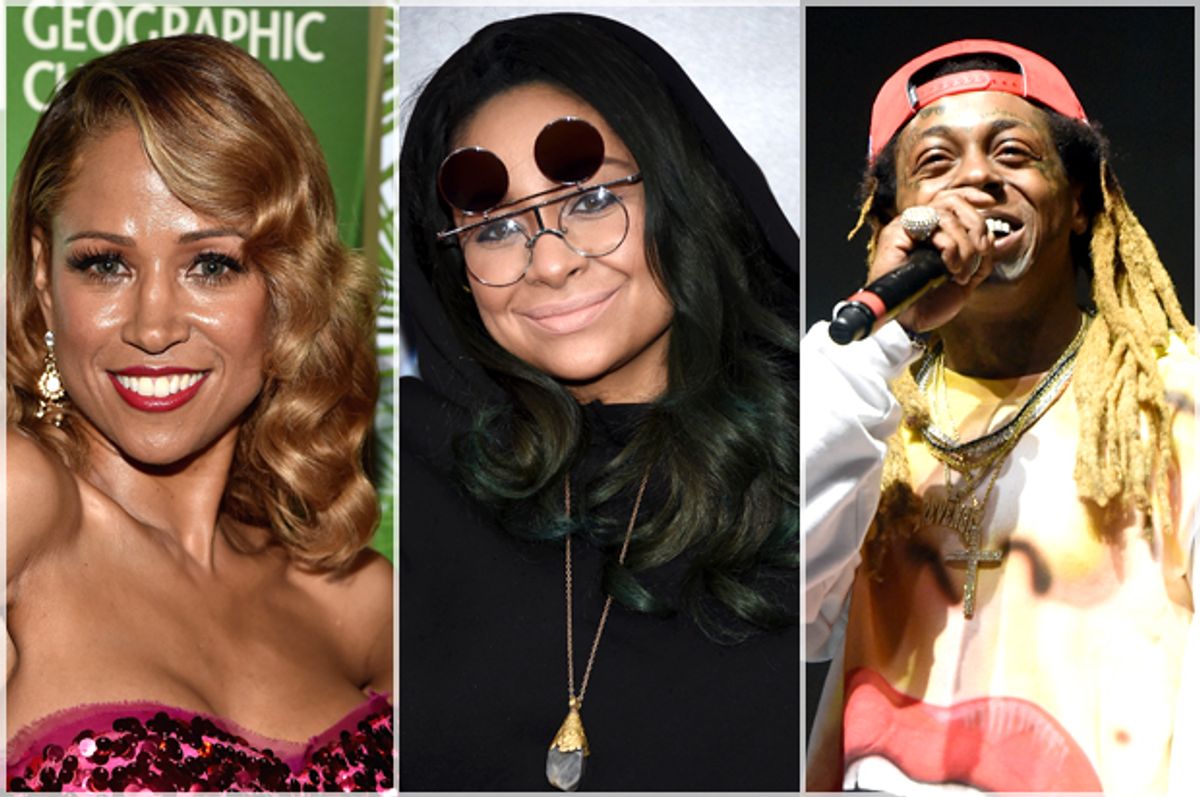 If I ever need advice on how to throw a football or what type of Creatine to take, I’ll call Cam Newton. If I need help putting together a rap album, I’ll summon Lil Wayne. These people are experts at what they do. But please, please, members of the media: Stop asking these people to speak about race. The same goes for the RZA, Stacey Dash, Raven-Symoné, Donovan McNabb, Jerry Rice, Fetty Wap and the rest of the celebrity #AllLivesMatter crew whose fame disqualifies their perspective on the typical black American experience.

I’m from a rough spot: the back of East Baltimore. I ran those blocks, fell asleep on the corners and fought until my mouth welled up with my own blood, but guess what? That was a decade ago. Now I mentor kids, promote literacy and donate books to underfunded schools and youth programs, so I’m no longer qualified to speak about what it’s like today to hustle in those alleys and survive on those streets. That’s how I feel about these disconnected celebrities. Nostalgia is great and giving insight on how things were before you made it is valuable. But the earth spins and culture evolves.

Yes, you are black, so you so do have an understanding of the black experience, but your black experience isn’t the typical black experience. Most of us don’t have millions or thousands or even hundreds of dollars at our disposal. That means some of us live in neighborhoods where we don’t have access to things like Wi-Fi. Yeah, I know people around my way without Wi-Fi, living in the middle of a food desert, raising their kids on scraps and sending them to schools where they are forced to be educated with scraps.

Police have different mentalities in these neighborhoods. Their jobs aren’t to protect and serve; their jobs are to terrorize and enforce. I’m not qualified to speak about what happens in poor white neighborhoods because I rarely frequent them, but I know what happens to black people in poor black neighborhoods because of my upbringing, where I work, where I live now and what I see on TV. #BlackLivesMatter doesn’t devalue anyone else’s life or lived experience, and it doesn’t mean that other people don’t matter, but the movement is based on the idea of poor black people constantly being victims of police violence.

When was the last time an innocent white person or rich black celebrity was murdered by the by a cop? I’ll wait. . . .

White suspects and black celebrities are rarely shot because a police officer will see a white suspect or a black celebrity and think, I can't just shoot that person. Most of us don’t have that luxury.

Let’s use Ray Lewis as a case study. White people in Baltimore love the retired Ravens linebacker more than anything. Grown heterosexual and homophobic men fawn when he speaks. They've mastered his signature dance move and hang pictures of him on their mantel between Grandpa and white Jesus. And why not? He’s brought the city two championships and cries during the national anthem. Last year Baltimore exploded after the murder of Freddie Gray, an innocent unarmed 25-year-old black man who died while in police custody. Ray Lewis had his own explosion on YouTube. He posted a goofy video about the way we reacted to Gray’s murder and the Baltimore uprising. He yelled things like “It takes a village! This is our city! Violence is not the answer! Get off da street!”

The problem is that Ray isn’t and was never qualified to offer his opinion on this subject. Hungry kids on the streets don’t know Ray Lewis. He hasn’t spent any real, non-photo op time in these places — nor is he required to. But if he did, he’d know that violence is the only thing that many police officers in poor black neighborhoods offer. Some of those kids can't get off the street because they live there.

It’s cool to yell about how you’ll do whatever it takes to bring change or "it takes a village" if you are a part of the village but Lewis isn’t. So he's not qualified to speak on the behalf of this village's inhabitants. I don’t remember him doing any work with any of the grassroots changemakers in the city. But he did have time to meet with Donald Trump, which makes him even less qualified because meeting with Trump means you have zero respect for the people whom you think you can speak for.

These celebrities think that the fact that white people praise their athletic accomplishments and buy their products erases racism. Maybe it does in their world, but not in ours. Lil Wayne even told "Nightline" this, and it disappointed me because his earlier music offered great insights, but money almost never fails to cook the brains of the people who once made positive contributions to defining culture. Lil Wayne is now unqualified.

The big issue is representation. If Tom Brady drop kicked an infant in the back of the head, we aren’t going to blame the entire white community. White people get the opportunity to speak for themselves. Yet every time a black person gets famous and opens his or her mouth, they have the luxury of speaking for the entire black race. We really need to move away from that. I love Michael Eric Dyson and Oprah; I was raised by Nas and Jay Z and I could listen to Chris Rock tell jokes for hours, but none of these people speak for me. I’m my person with my own thoughts.

Wake up, America: There is more than one black voice.