Lessons from Al Franken: Can Donald Trump shed his entertainer persona baggage once in office?

Concerns over Sen. Franken's "SNL" career melted away after his 2008 election. Will Trump's reputation follow suit? 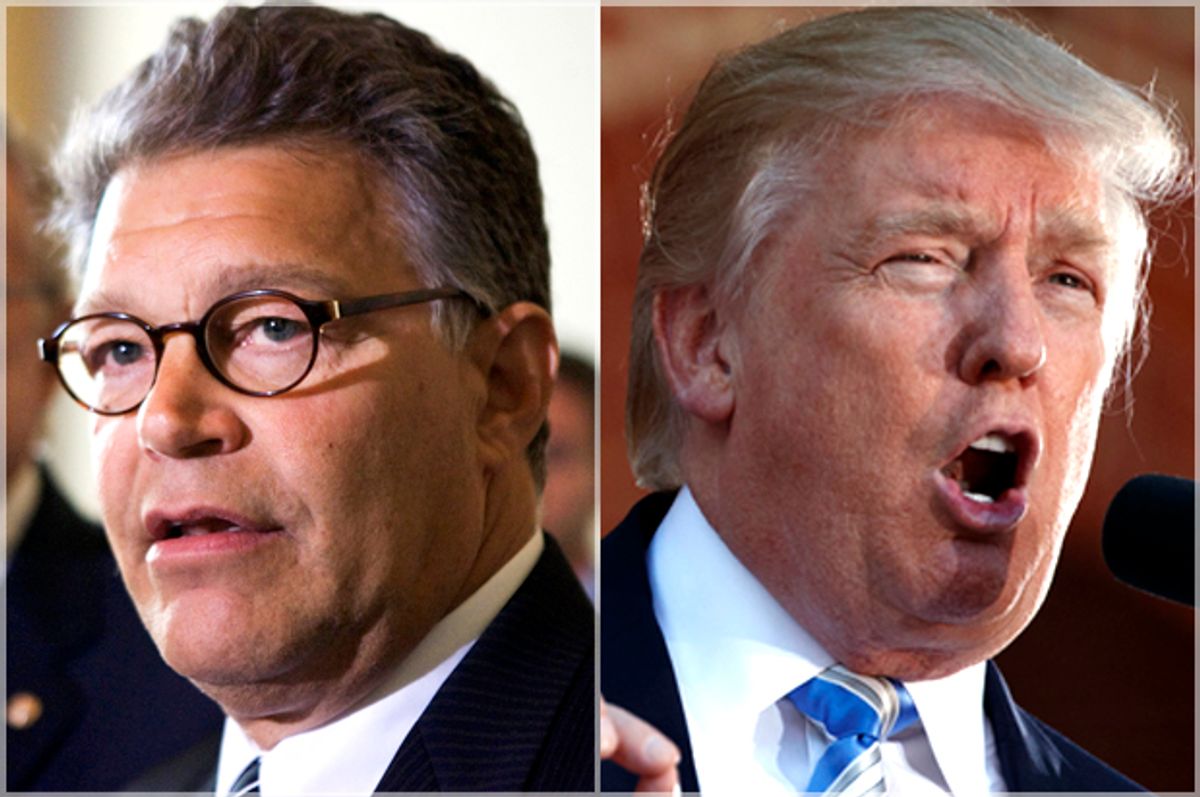 Liberals who were comfortable with the 2008 candidacy of Sen. Al Franken, a Minnesota Democrat, should remain open to giving President-elect Donald Trump a chance. Franken, a career comedian and writer/performer for "Saturday Night Live," sharply pivoted from an entertainment career to serious policy and politics as a senator. Franken was a flamboyantly ribald figure during his "Saturday Night Live" days, but even most of Franken’s GOP colleagues would likely admit he has approached Senate duties with understanding of the seriousness of the role.

Slate editor Michael Kinsley summarized the comedy rap sheet on Franken back in 2008, a story Democrats should revisit as they still claim #NotMyPresident. Franken proposed rape jokes at a "Saturday Night Live" staff meeting, fantasized to Playboy about three-way sex with robots and insulted women in Afghanistan.

“If the voters of Minnesota would rather be represented by a hack like Norm Coleman than laugh off a few jokes that didn't work, then they should stop complaining about being stuck with professional politicians,” Kinsley presciently wrote in 2008 before Franken defeated Coleman by 312 votes after months of recounts and legal fights. “And the real joke will be on them.”

Why shouldn't Kinsley’s words apply in the case of President-elect Trump, who hasn’t yet assumed office and was swept into power because he, too, lacks a typical politician's resume? Trump’s electoral victory was much clearer than Franken’s — recount efforts pushed by Jill Stein and Hillary Clinton have been impotent.

Mark Leibovich, chief national correspondent for The New York Times, recently published a lengthy profile and interview with Franken, who said his candidacy taught him that “celebrity trumps ideology.”

Leibovich writes that Franken “has been strenuous in his attempts to leave his comic past behind, though he was once busted for making dismissive faces and hand gestures behind Mitch McConnell as the Republican leader gave a floor speech in 2010. ‘This isn’t “Saturday Night Live,” Al,’ McConnell said, admonishing Franken, who later wrote a note of apology.”

Franken wrote a satirical novel called “Why Not Me?” which details Franken’s own fictitious celebrity run for president. Leibovich writes: “His character is corrupt, clueless and unprepared, but a confluence of unlikely factors — and Franken’s wildly popular vow to eliminate A.T.M. fees — somehow propels him to the White House, where things quickly go off the rails. President Franken loses his mind (punching Nelson Mandela in the stomach during a meeting!) He is the subject of a special congressional inquiry — the Joint Committee on the President’s Mood Swings — and is forced to resign after five months. Franken published ‘Why Not Me?’ in 1999.”

Franken has now said he is taking a “wait-and-see approach” to a Trump presidency, after spending the entire 2016 campaign mocking and dismissing Trump’s chances, including telling the Democratic National Convention in Philadelphia that he was “a world-renowned expert on right-wing megalomaniacs” because he had received “a doctorate in megalomaniac studies from Trump University.”

On Twitter last Thursday, Franken questioned Trump’s recent tweet saying that under his administration the United States would expand its nuclear arsenal. Understandably, Trump's tweet raises questions. But perhaps Franken, of all people, would recognize the difference between satire and bluff vs. actual policymaking. Liberals like to tell religious conservatives not to take the Bible literally, only figuratively, at best, for its broader truths. Perhaps they should heed their own advice on Trump.

That said, Trump's critics, including liberals and #NeverTrump conservatives like me, were critical not just of Trump's divisive language. We were also concerned about what the language meant about Trump's intended policies. Yet as House Speaker Paul Ryan pointed out in a recent interview with Sean Hannity, Trump himself has walked back his extremist language from a policy standpoint on things like the Muslim ban. Trump has also apologized for his comments on women and called for his more virulent supporters to heel. As President Obama himself has said, Trump is certainly not an ideologue.

Many conservatives, including Mitt Romney, have been able to reconcile our concerns, for now, offering Trump a blank slate with which to begin his administration. Trump's ongoing critics would do well to remember the Franken case and also the words of visionary billionaire Peter Thiel, a key figure in the Trump transition team, who said, “I think a lot of voters who vote for Trump take Trump seriously but not literally, so when they hear things like the Muslim comment or the wall comment, their question is not, 'Are you going to build a wall like the Great Wall of China?' or, you know, 'How exactly are you going to enforce these tests?' What they hear is we're going to have a saner, more sensible immigration policy."

Trump is not changing U.S. policy through one tweet, and only time will tell if Trump actually proves to be a level-headed, strategic thinker. Perhaps this tweet was a shot across the bow, a signaling that his America First strategy will not leave any option off the table. In an age of U.S. weakness and division under President Obama, an America First approach could be exactly what we need to usher in an American revival.