Don't take Newt lightly: He sees Donald Trump as the final stage of his long campaign to undo the New Deal 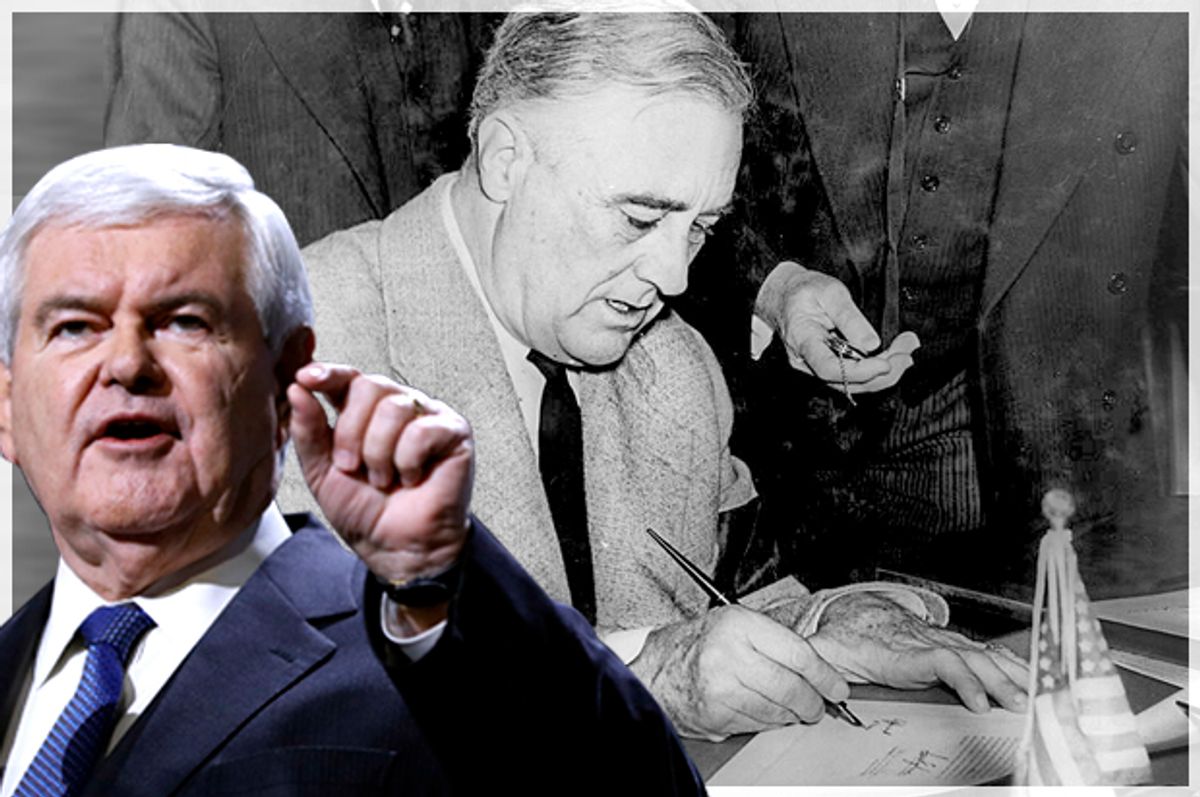 Seventy-five years ago this past January, President Franklin Delano Roosevelt went before Congress and the American people to declare that a generation’s “rendezvous with destiny” had come, that the Nazis, fascists and imperialists would strike without warning and Americans had to not only ready themselves for that possibility, but also turn the nation into the "Arsenal of Democracy."

The president did not speak from fear or seek to incite it. He had faith in Americans. He knew what they had accomplished in fighting the Great Depression. He knew they had not only rejected authoritarianism, but also redeemed the nation’s historic promise by initiating revolutionary changes in American government and public life. He knew they had subjected big business to public account, empowered the federal government to address the needs of working people, organized unions, fought for their rights, broadened and leveled the “We” in “We the People,” established a social security system, expanded the nation’s public infrastructure, improved the environment, built schools and municipal buildings, cultivated the arts and refashioned popular culture and imbued themselves with fresh democratic convictions, hopes and aspirations. Indeed, he knew that while there was much still to be done, they had made the United States both stronger and richer and freer, more equal and more democratic.

Knowing all that, Roosevelt projected a vision of a nation and a world characterized by four fundamental freedoms -- freedom of speech and worship, freedom from want and fear -- a vision that would guide not only the ensuing war effort, but also the postwar labors that were to make America ever stronger, richer and more democratic. Those labors included enacting the Civil Rights, Voting Rights, Economic Opportunity and Fair Housing acts; expanding Social Security to encompass Medicare and Medicaid; passing immigration reform; instituting environmental, workplace and consumer protections; creating new universities and establishing public endowments for the arts and humanities; and establishing a public broadcasting system.

All that our parents and grandparents achieved, however, is now in jeopardy.

For the past 40 years the GOP right and reactionary rich, abetted by neoliberal Democrats, have laid siege to the promise of the Four Freedoms and the legacy of FDR and those we have rightly come to call the Greatest Generation. In the wake of November's election, they seem poised to renew their campaigns.

Just last week, former Republican speaker of the House Newt Gingrich, a fervent ally of Donald Trump, took to the stage at the Heritage Foundation to rally the right’s forces around the president-elect in favor of launching a final assault on what remains of the New Deal and the Great Society.

Utterly disregarding the fact that Trump lost the popular vote by nearly 3 million, and haughtily dismissing the fact that his Electoral College victory may be due to Russian interference in our electoral process, Gingrich spoke of Trump in the most fantastic terms. Gleefully noting that politicians and pundits other than himself had completely underestimated the real estate mogul; bluntly assailing the media as “the propaganda media” and calling it a bunch of “idiots” (which is truly startling in light of how the “MSM” had helped to “normalize the Donald” to the public); and unashamedly hawking his own new e-book "Electing Trump," Gingrich celebrated Trump’s business and political savvy, his salesmanship and showmanship, and his determination to “drain the swamp” and “kick over the table.”

But the real message Gingrich was bringing to Heritage was that right-wingers should stop worrying about whether they could trust Trump and start recognizing him as one of their own (notably, the editors of both the classically conservative National Review and the neoconservative Weekly Standard had distanced themselves from Trump’s campaign and candidacy). Portraying Trump as their new champion, Gingrich assured them that the president-elect was someone they could count on, someone who was seemingly prepared to lead them against the left and the Roosevelt legacy.

Gingrich began by announcing that Trump’s impending presidency represents “the third great effort to break out of the Franklin Delano Roosevelt model.” The first, Gingrich stated, was Ronald Reagan’s 1980 election victory and ensuing two-term presidency (aka “the Reagan Revolution”) and the second, Gingrich proudly recalled, was the 1994 Republican takeover of Congress (the so-called Gingrich Revolution that briefly shut down the Federal government).

Gingrich then really took off. And his smarminess knew no bounds.

Professor Gingrich the historian -- yes, he has a Ph.D. in history, and they don’t call it “piled higher and deeper” for nothing -- referred to “Trumpism” as a set of ideas and practices worthy of serious study. He then proceeded to not only dub his friend and idol the “Tribune of the American People,” but also proclaim that Trump was destined for presidential greatness. He stands, Gingrich announced, “in the tradition of Washington, Jefferson, Jackson, Lincoln, Theodore Roosevelt, FDR and Ronald Reagan, and by that I mean, in every case, they believed in the American people, they aroused the American people, and they led the American people to victory over entrenched powerful interests.”

Believe in the American people -- but repeatedly lie on the campaign trail? Arouse the American people -- to new heights of racial and religious hatred and fear? Lead the American people to victory over entrenched interests -- while appointing a coterie of billionaires and generals to his cabinet? If the dead actually can roll over in their graves, there must be a lot of tossing and turning going on right now at Mount Vernon, Monticello, Hermitage Gardens, Oyster Bay, Hyde Park and maybe even Simi Valley.

Gingrich, who was pressured by his own colleagues to give up the House speakership in 1998 due to ethics violations, may present something of a comic figure.  But don’t let the fact that soon-to-be President Trump left him off the Republican ticket, and has now apparently left him out of his cabinet, lead you to believe he is irrelevant.

We underestimated Donald. We should not underestimate Newt. He is smart, connected, well-funded and entrepreneurial. His histories -- most notably "Rediscovering God in America: Reflections on the Role of Faith in Our Nation’s History and Future" and "A Nation Like No Other: Why American Exceptionalism Matters" -- are as faithful to historical truths as Trump’s speeches are to contemporary truths. But they have been more than commercial successes. They also have been ideologically influential on the religious and political right. Gingrich successfully led the GOP to hijack the idea of American exceptionalism and, following suit, Trump emblazoned "Make America Great Again" on millions of red caps.

In fact, Trump may well have told Gingrich he needs him more as a publicist than as a department head. Gingrich himself told the press he would not hold a post in the Trump administration because he wants to work on “strategic planning ... I want to be free to network across the whole system and look at what we have to do to succeed.”

Don’t scoff. Gingrich, like Trump, is a showman, and even more than Trump he is a pontificator. He is also arguably the one Republican who can fuse the ambitions of Trump and the aspirations of the congressional Republicans.  Don’t forget, Newt captured public attention and Congress for the GOP in 1994 by issuing a "Contract with America" (an idea Trump also picked up on to issue a "Contract for the American Voter").

Gingrich surely sees himself as the grand figure who can harness together President Trump and the congressional Republicans in favor of pursuing a Trumpian Revolution. As Gingrich told the Heritage folks: If Trump can “dance” effectively through two terms; if Republicans can band together as a “movement” against the elitist, politically-correct left; and if they can elect another president in 2024; then they will be able to confidently say, “We have replaced the FDR model and we are now in a period of very different government.”

Of course, most Americans did not vote for Donald Trump and the great majority definitely did not vote to end Social Security, Medicare, Medicaid and environmental regulation and protection. But we can take little solace in that. The Republican right rules -- not just in too many states, but all too soon in every branch of government -- and, as Gingrich’s remarks make clear, they have the legacy of FDR, the Greatest Generation, and the fight for the Four Freedoms in their sights. Led by opportunists, reactionaries and crazies, they are ready to do battle.