Sex and the Marvel Cinematic Universe: Movie superheroes are being scrubbed of desire 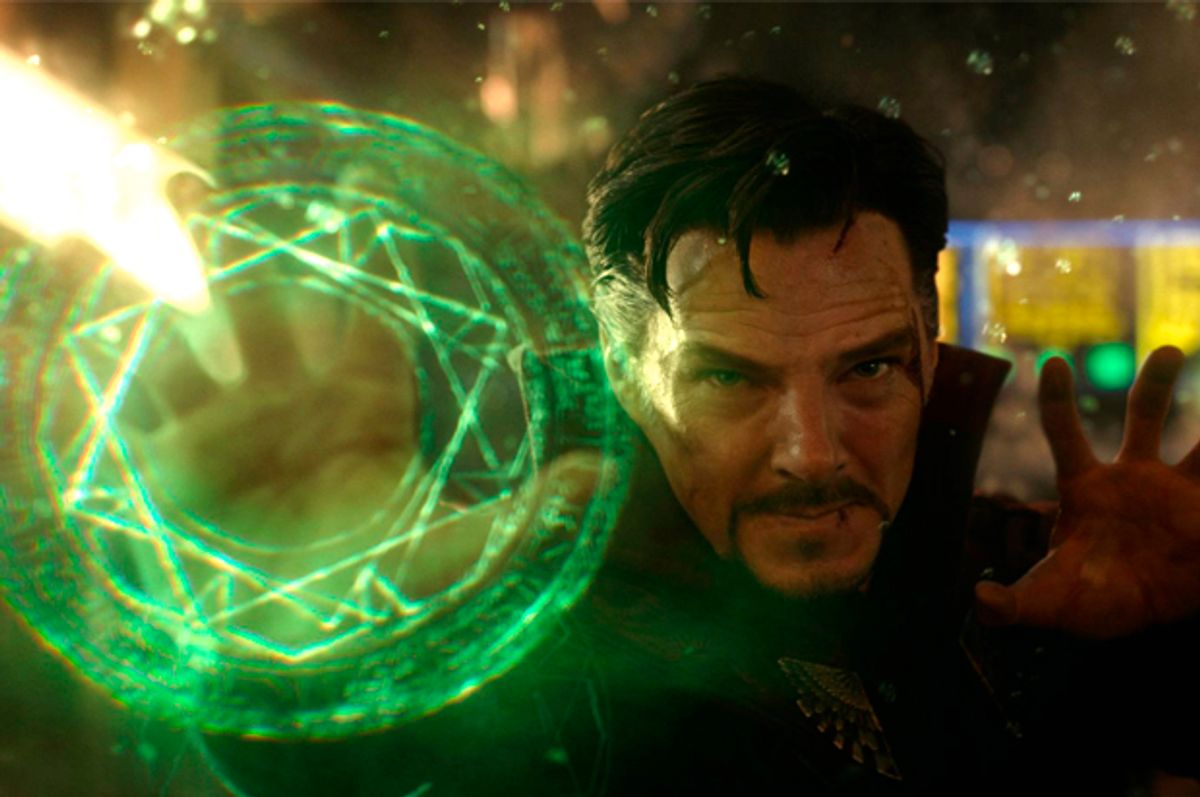 Of the many out-of-this-world things in the recent Marvel Cinematic Universe film "Doctor Strange," one of the most bizarre is that Marvel has abandoned the thinnest pretense that its heroes have sexual desires. Stephen Strange and his not-very-romantic interest Christine Palmer are already ex-lovers when the film begins, with no real indication of a wish to reconcile throughout. And when Strange inevitably goes off to pick up the hero’s lonely mantle, the two part ways with a chaste kiss on the cheek. While this is in line with recent Marvel installments, "Doctor Strange" goes one step further and raises two interesting questions: Why have these films dispensed with sexuality entirely? And why don’t we seem to care?

If we look to the comics source material, there is a precedent for this kind of neutering. The post-WWII period brought a decline in the relevance of the patriotic superhero archetype, and during the 1950s, comics featuring horror and romance rose in prominence, as did public anxiety about their social implications. This sentiment reached a climax in 1954 when psychiatrist Fredric Wertham published his seminal book on the degeneracy of comics, “Seduction of the Innocent,” which resulted in a congressional hearing on the subject. In response, comics publishers formed the “Comics Code Authority,” an elaborate set of moral criteria by which they all pledged to abide in order to avoid government regulation. The rules ranged from the vague promise to eliminate “unsavory illustrations” to the oddly specific vow to not depict werewolfism. Sex, needless to say, was off-limits.

Over time, the sexual and social revolutions of the '60s and '70s changed the moral terrain in the country, and by the early '90s, fewer publishers felt it economically necessary to adhere to the code. But by then its legacy was firmly entrenched in the material, and universally accepted rules had been established to explain why certain characters abstained from sex. Superman’s super-sperm for example, would annihilate a human being; the Hulk should not hulk out during sex for obvious reasons.

In the decades since the restrictions of the CCA were cast off, progress has been made towards exploring sex in the comics' source materials, but their film counterparts show the opposite trend. It seems to have nothing to do with moral panic. The Tony Stark of the comic book universe has had many conquests aside from Pepper Potts — he even goes as far as making a sex tape with Black Widow. In kind, the early Tony Stark (Robert Downey Jr.) of 2008’s "Iron Man" is presented as a playboy — he rolls around in bed with a reporter, the stewardesses on his private jet bare their midriffs and dance for him. However feeble these overtures are towards establishing him as virile, this incarnation is a far cry from the "Captain America: Civil War" Tony Stark of 2016, who has aborted his relationship with Pepper Potts (Gwyneth Paltrow) offscreen. Meanwhile, his onscreen sexuality is reduced to a couple of empty verbal jabs at an uninterested Black Widow (Scarlett Johansson).

We see similar treatment elsewhere. 2011’s "Thor" and 2013’s "Thor: The Dark World" are the halves of a love story between Thor (Chris Hemsworth) and Natalie Portman’s Dr. Jane Foster. By 2015’s "Avengers: Age of Ultron," the only indication of Foster’s continuing importance to Thor is an aside about how he is proud of her work. Portman is notably absent from the cast of the upcoming "Thor: Ragnarok." Even the budding feelings between Hulk (Mark Ruffalo) and Black Widow that are only broadly hinted at in "Avengers: Age of Ultron" end with the anti-climax of Hulk launching himself into outer space.

This increasing lack of sex feels dissonant. Aren’t superheroes supposed to be the realm of sex-obsessed teenaged boys? And the actors who play them are sex symbols in their own right — their physical attributes are on full display in their spandex costumes. The legacy of the Comics Code and economic factors explain some of this trend towards celibacy. Astronomical budgets ensure that these kinds of films must target the largest possible global audience and shy away from controversy. The Chinese box office is now a market in which franchise films are earning an increasingly higher percentage of total profits. There has been much discussion about the lengths to which Hollywood studios are willing to go to ensure their products will get past Chinese censorship, sometimes even involving Chinese bureaucrats in the filmmaking process. The whitewashing of Dr. Strange’s “The Ancient One” — an originally Tibetan character played by white actress Tilda Swinton — has been attributed to the desire to appease Chinese censors. Perhaps Dr. Strange himself was neutered for the very same reason.

But there is still the matter of the significant gap between the kind of explicit sexual content that would limit the scope of a global audience and a platonic peck on the cheek. Why do we not even see a passionate kiss and a fade to black? Hollywood’s own legacy of romance and sexuality may provide some background. Though heterosexual romance is often considered the domain of classical Hollywood cinema, a better antecedent to the cinematic Marvel superhero is the Western and action film hero. Our most enduring archetypes, from John Wayne to Dirty Harry to Rambo, have subscribed to the idea that a woman’s influence must be diminished by rejecting romance. Heroism often takes root only after a woman has been brutally murdered or done away with in some tragic manner. This spurs on the male hero and creates space for him to behave in a suicidal way that unleashes his fury on behalf of the state.

Whether we are talking about the literal frontier of the west, the urban jungle of action films, or the metaphorical frontier of space, men without women have been a staple of both Hollywood films and the militarized mechanism of war. The relationship was reified after 9/11 when “smoking out bad guys” became the mandate for eight years of American foreign policy and a never ending cycle of superhero franchise films. But where the Mel Gibson-style hero of the late '80s and early '90s would go on a disemboweling spree to avenge his murdered woman, current Marvel films see that pathos swapped out for a distinctly millennial ambivalence towards women in the first place.

It’s worth noting that within Marvel’s core fan base, some not only refrain from demanding sex in these films, but have also come to revile it. Message boards on the subject reflect a range of sentiments, but a common one is the angry assertion that these movies are simply not the place for romantic storylines. For a medium with a history of interplay between fandom and authorship, perhaps this onscreen rejection of sex speaks to the psychology of not only audiences, but the authors of the stories as well.

“Secret Identity Reader” co-author Richard Harrison addresses this in his essay, "Grown Women's Bodies in a Young Boy's Hands." “I do not see it as an unease I learned from comics; I think though, it was an unease the comics and I had in common,” Harrison wrote. Since the advent of the Comics Code and onwards, the comic book has been giving voice to a subculture of sex-averse young men and now that subculture has gone mainstream.

Recent studies show millennials are having less sex than the generations before them and this seems to be reflected on forums where some of the same men who form Marvel’s target demographic congregate to air their grievances. The Manosphere, Men Going Their Own Way (MGTOW) and The Red Pill are a few of the names given to contemporary movements which range from forums advocating for men’s rights to men seeking support in acts as simple as giving up gaming or masturbation. The amount of hostility directed at women varies. But what is consistent is a sense of powerlessness and a desire for autonomy from women, even if that means giving up sex.

There is also a case to be made that technology and our reliance on it are equally responsible for this mediation of sexuality. The world of superheroes is a highly technological one, in which militarized body armor, whether it be robotic AI like Iron Man's or merely technical like Captain America's, operates as a kind of full-body condom that is necessary to fight war and keep the male body safe, with the side effect of keeping the male body physically detached from other bodies. Abstinence, practiced by all-male religious orders since ancient times, is now being embraced by our most agnostic institutions: politics and cinema.

The dark world of the men’s movement and the military radicalization of young men may seem a far cry from the proposed asexuality of the MCU, but at the core of both is a shared understanding of popular culture (The Red Pill movement is a direct nod to "The Matrix" and Morpheus’s delineation of choice as a red or blue bill), the marginalization of women and a repression of sexuality. And while it is difficult to point to one single antecedent — technology, conservatism or a self-censoring endemic to both Hollywood and comics — it’s clear the neutering of Marvel films is reinforcing our increasingly insular worldview; the view that each of us is a self-sustaining island unto ourselves and we don’t need relationships to survive. And in this political moment, that seems like a dangerous message.

Sunny Teich is a visual-effects artist currently based in London. She has spent the past decade working on big-budget films at major studios including Disney, Sony Imageworks, and Weta Digital. Follow her

Raqi Syed is an American VFX artist living and working in Wellington, New Zealand. After holding positions at Weta Digital and Disney, and working on films such as "Avatar," "The Hobbit" and "The Planet of the Apes," she is now lecturing on virtual reality, media design, and film at the Victoria University of Wellington. Follow her on Twitter @hydroxandhorlix