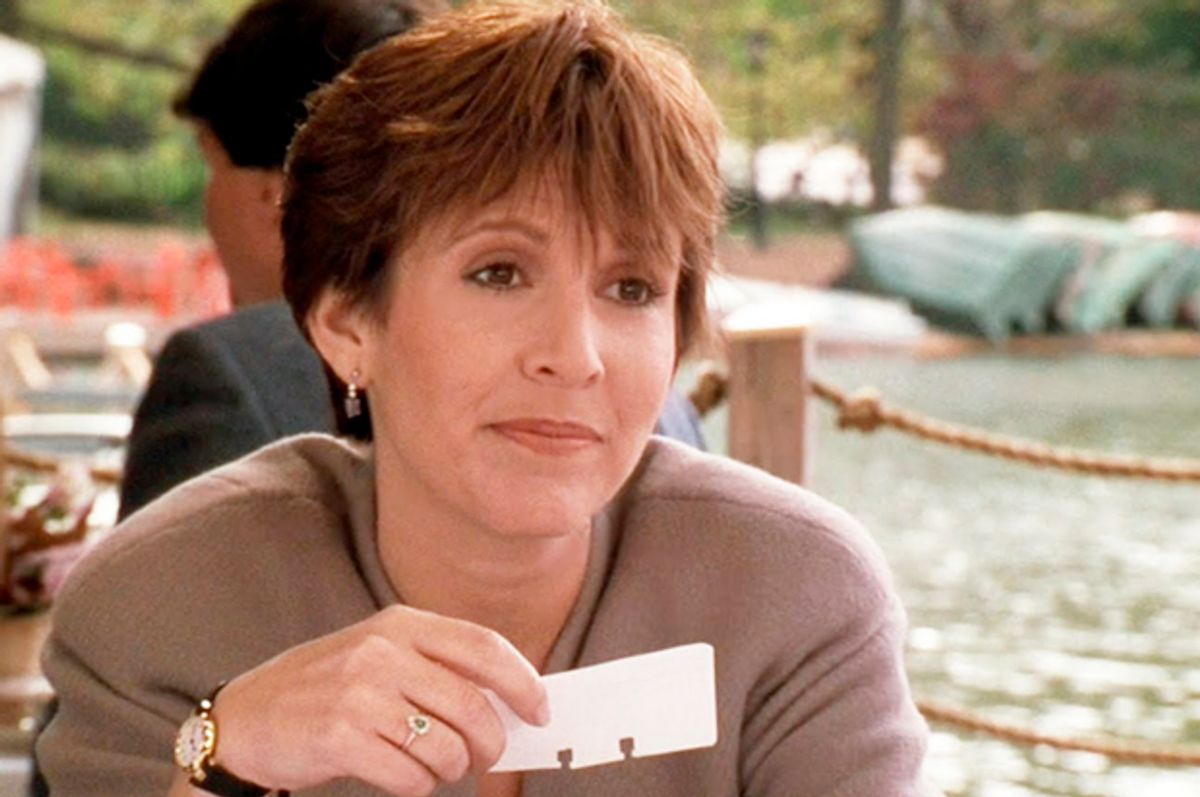 The death of Carrie Fisher this week felt like a particularly brutal kicker to a year in which far too many greats have left us. As the news sank in, a deluge of tributes to the 60-year-old star justly praised her for her iconic portrayals of General Leia Organa in the "Star Wars" films, for her work as an author and script doctor, for her fearless, outspoken work to detstigmatize mental illness and her gloriously dry sense of humor. But while we're heaping accolades, let's also remember Fisher's career-long run as one of Hollywood's greatest supporting actresses. From ingenue to career woman to prickly mom, for over forty years, she was the scene stealing MVP of every production she graced.

For her debut, Fisher played the teenaged daughter of one of lothario hairdresser George's (Warren Beatty) clients/lovers. Sizing him up quickly, she challenged him about his sexual orientation, and he rebutted by comparing her to her mother. She responded by bluntly seducing him, successfully tormenting both him and her mom in the process.

Fisher, who was dating the film's costar Dan Aykroyd at the time, played the vengeful "Mystery Woman" jilted by John Belushi's Elwood. The sight of Fisher, rifle on her hip, explaining that "For me, for my mother, my grandmother, my father, my uncle, and for the common good, I must now kill you and your brother" — right before getting duped again — is pure delight.

How many other actresses could have boasted two memorably witty taxi scenes in their careers? Three years before sprinting into a cab with Bruno Kirby in "When Harry Met Sally," Fisher's April skillfully edged out her business partner Holly (Dianne Wiest) and would-be rival for Sam Waterston's attentions with a slick negotiation over who gets dropped off downtown first.

Meg Ryan may have delivered the film's most memorable moan, but as Marie, Sally's straight-shooting bestie, Fisher got all the best lines. She was the one who noticed Harry "staring at you in Personal Growth," who described another woman as "Thin, pretty, big tits. Your basic nightmare," who romantically demanded of her boyfriend, "Tell me I'll never have to be out there again" — and who had the ultimate system for her single lady Rolodex.

Even with a tiny role in the underrated ensemble comedy, Fisher was gold. Her satisfied, "I'm Betsy Faye Sharon, and I'm a bitch," is as great a hello as Fisher ever delivered.

As a family therapist, Fisher played it hilariously straight when faced with the challenging task of mediating between the murderous, megalomaniacal Dr. Evil and his misunderstood teen son Scott.

As archivist Bianca Burnette in the horror sequel, Fisher deadpanned that she had been "this close" to getting the role of Princess Leia, but lost out to "the one who sleeps with George Lucas" and reportedly improvised some of her own lines.

Playing herself as the series took a brief detour to Los Angeles, she mistook Carrie Bradshaw for a prostitute and got to fire Vince Vaughn, delivering one of the single best minutes in the show's entire run.

Having Liz Lemon get to meet and disastrously work with her television writing idol was a plot made in sitcom heaven. Having Fisher play the embittered, day-drinking Rosemary Howard was a stroke of genius. It was also a beautiful nod to Lemon's Princess Leia obsession — and even gave the show the chance to have Fisher herself give a new twist to one of Leia's most famous lines. On Monday, Tina Fey issued a statement saying, "Like many women my age, Princess Leia occupies about 60 percent of my brain at any given time. But Carrie’s honest writing and her razor-sharp wit were an even greater gift."

While thinking about casting Rob Delaney's mom Mia on the Amazon comedy, creators and stars Delaney and Sharon Horgan, the duo watched Fisher give a speech at the Attitude Awards in London. Horgan later said, "I turned to Rob, and I went, That’s your awful mother!"  Fisher proved wonderful at being awful — and even managed to snag a role for her beloved canine companion Gary.