A resolution for the Internet in 2017: Spare us all your outrage over outrage

Steve Martin and Cinnabon tweeted tributes to Carrie Fisher that many hated. How about we listen instead of yell? 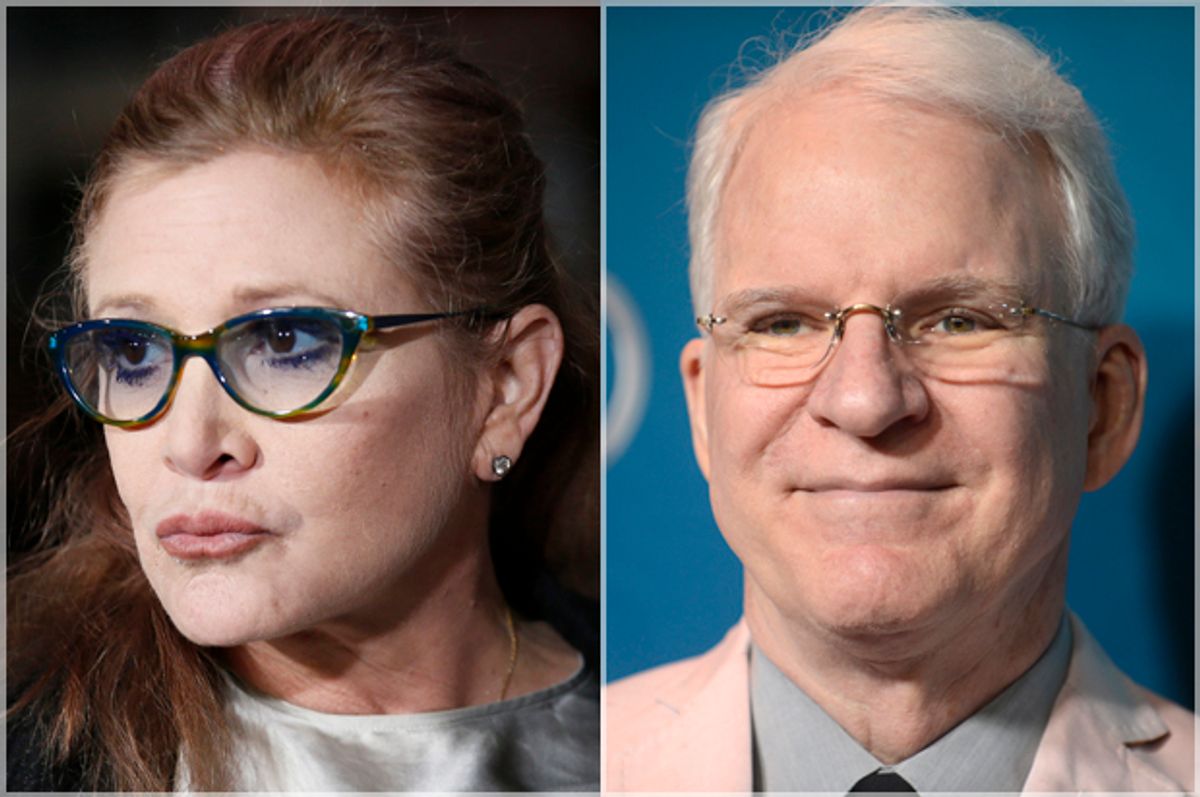 My resolutions for 2017 are pretty straightforward. I want to listen more. I want to live more in a state of action than reaction. I definitely want to limit my tunneling into Twitter rabbit holes of outrage. And based on how this week's been going, I'm not going to wait till January 1 to get started.

Carrie Fisher's death on Tuesday — another in the year's brutal cavalcade of high profile losses — prompted a public outpouring of grief from celebrities and fans alike. Not all of it was especially well thought out. For instance, Cinnabon quickly posted an ill advised homage featuring an sugary outline of Princess Leia with a real cinnamon roll for her hair, and the message, "RIP Carrie Fisher. You'll always have the best buns in the galaxy." The response was swift and negative — Slate even managed to come up with "Twenty-Four Questions Raised By Cinnabon’s Regrettable Tweet About Carrie Fisher," that included, "Did you know Carrie Fisher hated the Star Wars hairstyle depicted in your tweet, referring to it as a 'hair prison for the fat' in her cheeks?" The company soon deleted the offending tweet, with an apology explaining the message "was genuinely meant as a tribute, but we shouldn't have posted it. We are truly sorry."

This was then inevitably followed by a round of scolding for those who'd taken offense. Writing in the National Review, Katherine Timpf tsk tsked that "Apparently, we have reached the point where actual, real-life, grown-up adults are spending their Wednesdays mad at a cinnamon-roll company’s Twitter account," and argued that Fisher "was among those who understood and respected the value of humor in overcoming tragedy — and making her a poster child for the opposite is far more offensive than anything that any pastry company could have tweeted."

Also on Tuesday, entertainer Steve Martin tweeted out his own tribute to Fisher, recalling that "When I was a young man, Carrie Fisher was the most beautiful creature I had ever seen. She turned out to be bright and witty as well." Critics quickly rebutted that, as Claire Landsbaum wrote for The Cut, "That characterization of Leia — as a wet dream for prepubescent men — is something Fisher spoke out against her whole career… So remember Fisher for her immense talent, her outspoken feminism, and her moving commentary on mental health — not for the way she looked onscreen."

And just like the Cinnabon backlash backlash, this too was followed by an outpouring of rage about Martin getting "trashed" by "some grumps."

I'll admit that while I definitely believe Cinnabon could have done a better job honoring an icon whose iconic image was yes, often associated with breakfast pastry, I don't have a lot of super strong feelings about its relatively minor social media misstep. And while Fisher made it abundantly clear that as she put it, "Youth and beauty are not accomplishments," I seriously doubt she'd have been bothered  that an old friend described her, in order, as beautiful, bright and witty. That said, as a member of that gender that has spent the past year watching a man who views women as either beautiful or fat pigs ascend toward the White House, I'm not going to lecture women about sexism. I'm not going to immediately yell at them about what they should or should not feel. Join me, won't you, in not getting angry about EVERYTHING?

I truly get that pretty much everybody is on the hair-trigger lately, and there's a lot of defensiveness to go around. But in a country in which misogyny, racism, homophobia and anti-semitism have been making a really grand recent show of it, I want to work on not taking offense when people of typically vulnerable, marginalized groups take offense. It's a wild idea but here goes: Not every opinion is an invitation to an argument. And if someone appears sensitive about an issue and you, as a white person, male person, straight person, Christian person, feel uncomfortable about that sensitivity, maybe try to sit with that discomfort for a while. It won't kill you. Maybe consider that your experience is not universal, and that someone's frustration about one seeming-to-you small thing is about a whole lot of piled up other things too. I had to put this into practice myself earlier this week, when I learned that a piece of entertainment I'd recently found enjoyable had been mired in some controversy about cultural accuracy. I genuinely didn't get what the fuss was, but guess what? It's not my culture, so I don't need to tell anybody else they're wrong!

In the new year, I plan on continuing to yell and be offended and point out wrongs where I see them, and I doubt I will lack for opportunities. But I'm also going to pick my battles, and not tell those whose battles are different from mine what their priorities should be. That defensive "What's the big deal?" and "Fight the REAL problems!" and "Not all men" and "All lives matter" stuff isn't necessary. What is necessary is for those who belong to groups that have traditionally held more power to just listen to those who haven't. That's how we punch up. That's how we learn.