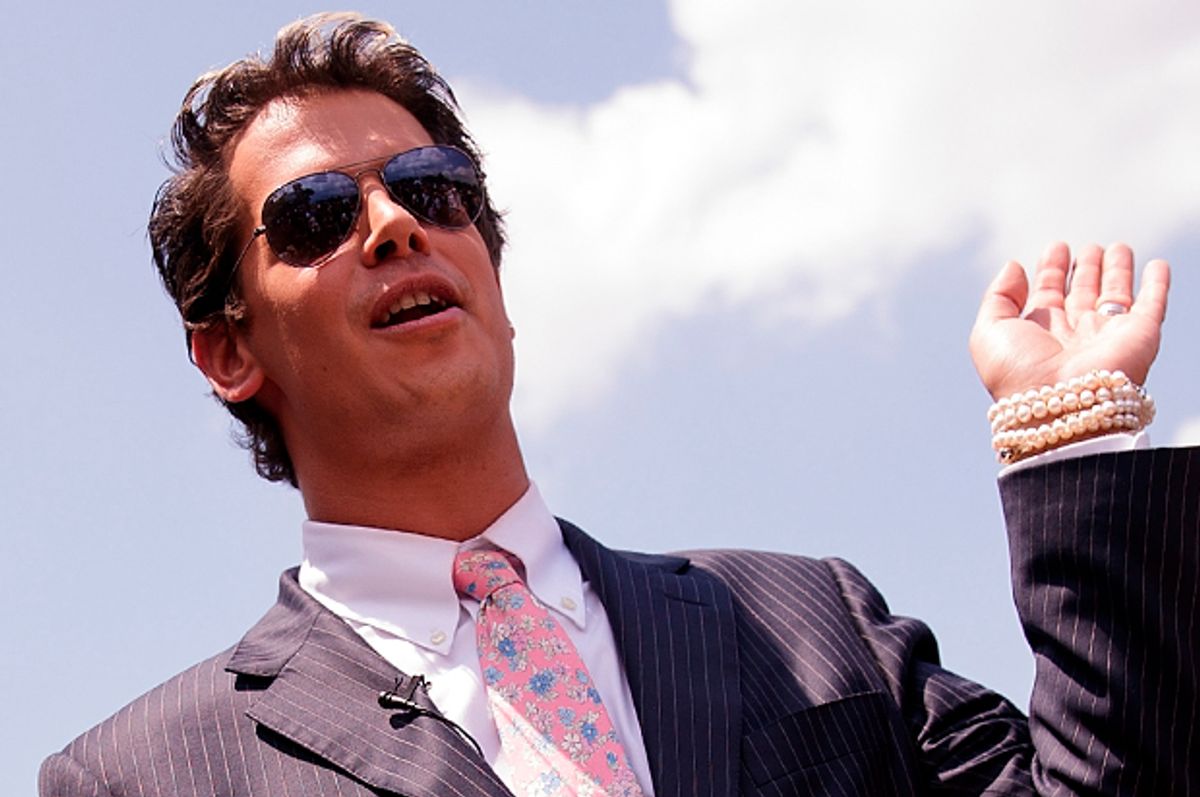 Members of the political and cultural right have spent decades framing themselves as aggrieved, misunderstood victims. Conservative scions and right-wing rich boys, from Dan Quayle and George W. Bush to Barry Goldwater and Donald Trump, have framed themselves as rugged individualists and bold Churchilians standing up to a latte-sipping liberal “elitists.”

A few have spun their privilege into a kind of rebel cool: Only I can stand up to these PC ninnies,  humorless liberals. and howling feminists. Like Dirty Harry in the land of cucks, only I can speak the truth and look cool doing it.

The latest of this foul crew is the Breitbart pundit, alt-right antihero, and Tori Amos-quoting tough guy Milo Yiannopoulos. The British-born bottle-blond has not only, according to him, drawn a quarter-of-a-million-dollar advance from a major publisher, he has managed to spin it as a victory for his own integrity and defiant courage, with a parallel to the the up-from-the-bootstraps triumph of the man who will soon helm the nation. For a guy booted off Twitter for nasty, racist missives about "Ghostbusters" actress Leslie Jones — some sent by him, some by his fanboys — Yiannopoulos’s breaking from the 140 characters he is no longer allowed to send to penning a memoir about the triumph of right-populism stands as a real coup. It would, you’d think, coax out a bit of simple gratitude. Then again, maybe not.

"They said banning me from Twitter would finish me off. Just as I predicted, the opposite has happened," Yiannopoulos told The Hollywood Reporter about the new project, to be published by Simon & Schuster. "Did it hurt Madonna being banned from MTV in the 1990s? Did all that negative press hurt Donald Trump's chances of winning the election?”

It’s only too bad he did not mention Martin Luther King after his time in a Birmingham jail, or John Lennon after his controversial comment about The Beatles outdrawing Jesus.

"I met with top execs at Simon & Schuster earlier in the year and spent half an hour trying to shock them with lewd jokes and outrageous opinions,” he also told THR. “I thought they were going to have me escorted from the building — but instead they offered me a wheelbarrow full of money.”

People on the left have reacted with disappointment, frustration, and a bit of mockery to Yiannopoulos’s big score. “Oh, how exciting and groundbreaking it is to hear that a big book publisher might give a right-winger a book deal,” Evan Hurst wrote on Wonkette. “It’s probably because he’s so controversial!”

According to the publisher’s press release, "Readers can expect a string of waspish one-liners and bitchy put-downs from America's favorite mischievous gay conservative.” Sounds like a blast, eh?