Don't ring out 2016 — torch it: Some New Year's Eve rituals to transform despair into closure — and even hope 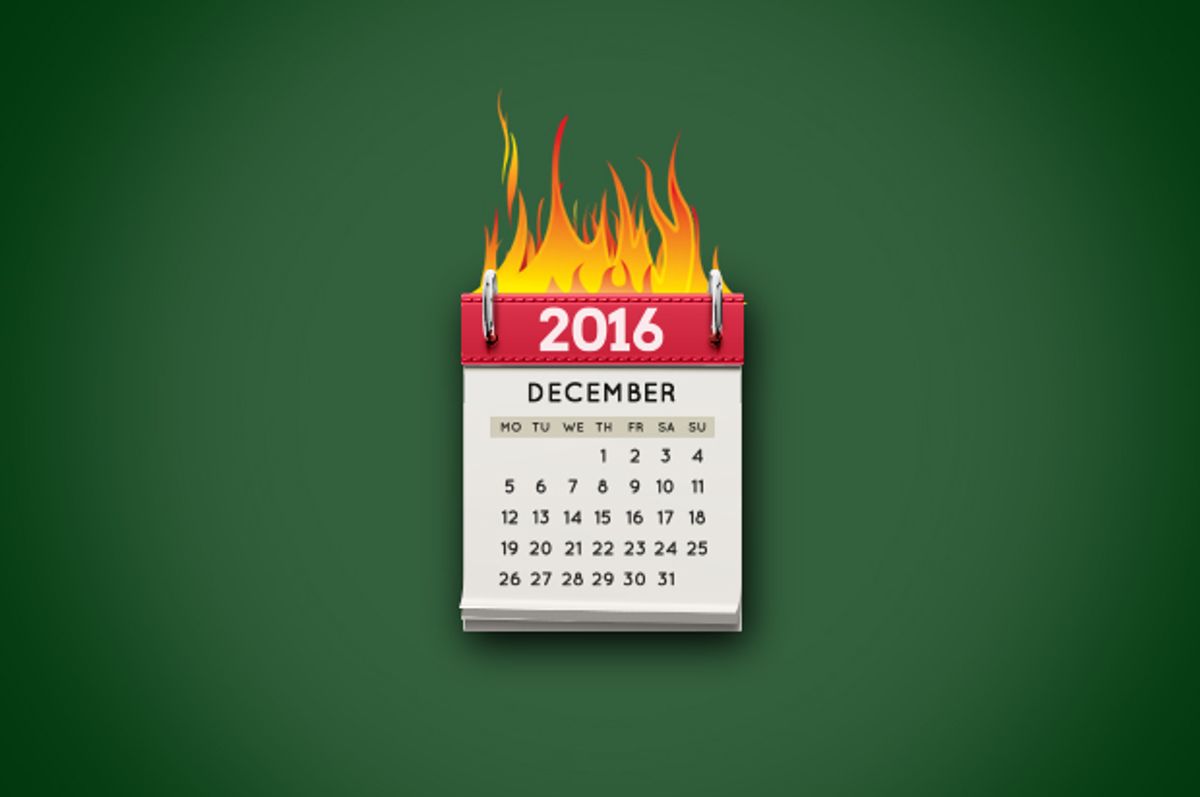 I've been looking a lot lately at piñatas. It's not because my daughters have a shared birthday in early January — they're rapidly outgrowing paper plates and party hats festivities anyway. No, instead, I've been intrigued by the idea of having some friends over on December 31 to gather around an item emblazoned with year of our Lord 2016 on it — and taking turns beating it with a bat.

This year, as has been exhaustively chronicled already, has been for a great many of us one of personal disasters and global garbage fires. Now, as December comes to a close, clinking a flute of off-brand Asti spumante while confetti rains down on Ryan Seacrest seems a little insufficient. If I could send 2016 into space in a rocket, I would. If I could literally set it on fire, I would. So maybe I'll just symbolically hit it really hard.

I know that the world will not, alas, magically reset as the new year dawns across the world. I know that quite the contrary, we are no doubt in for a humdinger of a 2017. Yet the human need for ceremony, for the marking of transition, is wired into us. As a 2013 feature in Psychology Today noted, "We do these things as a way to regain a sense of control and diminish negative feelings after our worlds have been shaken up." And wow, has our world been shaken up.

Most of my friends are marking the end of the year more quietly and peacefully than I have in mind. My friend Amy, for instance, recently went to a Yalda party. As she explains, "It's a Persian tradition where you get together on the solstice and read poetry throughout the night. I read this amazing poem, which made everyone happy and sad. And I made an internal decision/hope that the solstice could just be the end of 2016." She adds, "Of course, being a Jew, I also worried that we are all wishing for the end of one terrible year just to enter a worse one, but ... one ritual at a time, I guess."

My former colleague Kaitlin has likewise already done a similar ceremony. "I participated in a solstice meditation led by a great meditation teacher," she says. "At one point, we made offerings of the most satisfying moments of 2016 and of our greatest disappointments and failures in 2016. There's something about revisiting the events of the year through ritual that really does evoke a sense of closure and the possibility of opening into a fresh new year.

My neighbor Shannon says that she's welcoming in the new year by "lighting my altar, opening my windows and burning sage and some Palo Santo . . .  I'm smudging the entire house." She adds, "I hope it truly shifts the heavy energy in my heart and soul." Another neighbor, Karen, says, "I will stand in the silent woods and BREATHE. For a very long time. Boring, I know. But at this point it may help me tune out the static and set the tone for a new year."

Others are choosing to take a step further back. Matt, a freelance producer, admits, "I've decided to give up on pretty much everything, just for the rest of the year. I'm going to stay in bed until January 2nd. No Christmas events, no New Year's Eve parties, no carols at the local park. This isn't a metaphorical give-up or an empty threat to throw in the towel. I'm embracing it. Family members are cross; my girlfriend is concerned; my friends and colleagues are offended at their declined invitations…. I feel so upset by the wave of anger and hatred sweeping through the world, and washing through our supposed shining Western democracies. I just feel like my heart can't take it. My mind can work with the answers to those problems but my heart isn't all that bright when it comes to these things. It just feels sadness right now. And it needs to give up, just for a week or so." And a college pal says, "I find myself astoundingly close to fleeing the jurisdiction. As in, moving to Italy. In essence I'm saying to 2016 and the U.S. in general, 'You're just too much to deal with. I'm going somewhere I can be happy.'"

Others have more immediate, dramatic plans. A west coast colleague says, "One lovely benefit of living in the Pacific Northwest is that the relatively temperate weather enables people to have beach bonfires at designated municipal park destinations year-round. Some may want to create an environmentally friendly-ish effigy of the worst moment of the year, or person, and toss it on the flames with a flourish, perhaps balancing out the force by lighting candles off that same fire for those we've lost."

But it's Carter Turner, a Virginia religious studies professor, who wins my vote for most glorious New Year's Eve plans. After what he describes as a "rotten year" that's included sudden loss and grief, he too is looking forward to some cleansing flames. He explains, "My friend Dave has a tree burn on his farm every year after Christmas where his friends bring their Christmas trees and we torch them in the fire pit. His grandfather was governor of Virginia in the twenties and his uncle, five years old at the time, stuck a sparkler in the Christmas tree and everything went up in flames. The party is a great affair. This year's celebration takes place on New Year's Eve so I am going to celebrate this terrible year coming to an end. And since Trump may very well burn this country down, this year's burn has special meaning." Yet he also muses, "The governor's mansion was rebuilt, so maybe the country can come back from Trump's damage. The New Year is all about being hopeful, right?" I'm going to stay hopeful too. Right after I set a few things on fire.