Could Amazon stop a Ron Swanson with a gun? A new patent for drone protection shows the retailer is trying

Amazon is well aware that people might try mess with their flying robots, and they're taking precautions 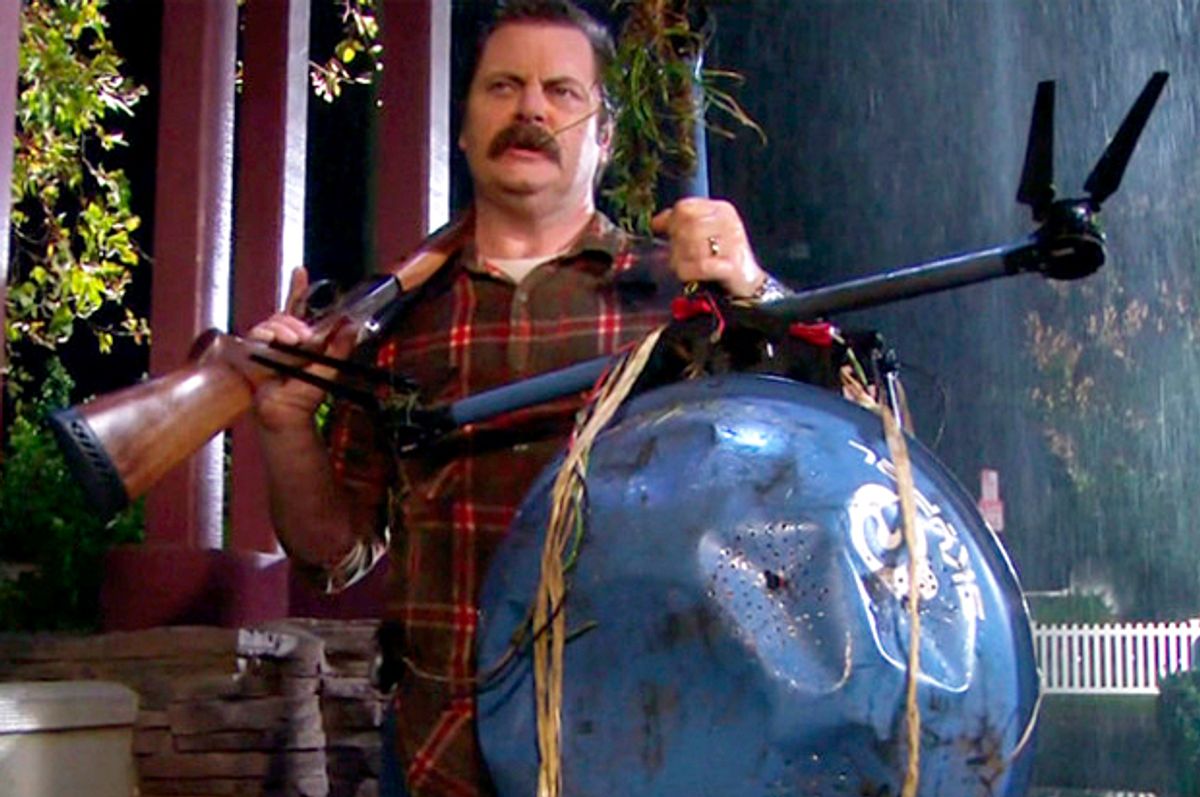 Nick Offerman as Ron Swanson in "Parks and Recreation" (NBC)
--

We’ve all thought about it after learning about Amazon.com’s ambitious effort to fill the skies with its unmanned delivery drones. What happens if someone tries to take one of these flying merchandise-hauling contraptions down?

The idea was famously touched upon in an episode of NBC political comedy “Parks & Recreation,” when stanchly libertarian Luddite Ron Swanson (played by Nick Offerman) shoots a delivery drone with a hunting rifle. Last year, a Kentucky man did just that to a neighbor’s drone after it hovered over his property one too many times. And in 2014 one town in Colorado voted over whether to issue drone hunting licenses; the proposal failed, but more than a fourth of the town’s voters supported the idea of protecting their airspace.

But anyone plotting against Amazon.com’s Prime Air Delivery drones, which began a pilot run in the U.K. this month, will encounter robots that have been designed to detect and evade attacks and to collect as much data about the incidents -- and even quickly alert local authorities if someone is firing a weapon.

“The UAV [uncrewed autonomous vehicle] may be exposed to various threats that may compromise the UAV,” says a 33-page patent filing published last week on the U.S. Patent and Trademark Office website, citing numerous potential threats. For example: “An adversarial person may use a weapon to inflict damage to the UAV.” Amazon.com might not deploy all of the features described in the patent, but it does outline the type of threats it anticipates and how it plans to counter them.

The issue of protecting UAVs from malicious attacks will most certainly gain greater attention as U.S. regulators work out the rules for the use of commercial drones. Many experts think that by 2020, Americans will begin to routinely spot commercial drones operating in the wild.

Amazon.com engineers are calling their measure a “compromise system,” which includes numerous sensors and internet-of-things-type technology aimed primarily at keeping the drone on its pre-determined flight path regardless of attacks from, say, wireless signal jammers trying to confuse and cajole the drone from its flight path. The backbone of the system is called a “mesh network” that allows the drone to communicate with other drones, or use satellites signals, radio towers or even the sun to orient itself in the event it gets confused by a hacker’s attempt to jam its primary navigation system.

But what about a Ron Swanson with a gun? The short answer: There’s not much a drone can do if it’s shot at.

But the patent outlines a way in which the drone can almost immediately detect that an object, such as a bullet or arrow, has been launched in its direction, and then it could inform its human handlers tasked with monitoring drone activities. Under a system like this, some human at Amazon.com would know almost instantly.

The system could be configured to either “take evasive maneuvers, navigate to a safe landing or parking zone for inspect, and so forth,” according to the filing.

What the system is designed to do is to find the safest path to a soft landing in the event of a malicious attack while the company administrator deploys someone to retrieve the unit. If the drone is hit by a trajectory and loses control, the patent says small air bags or crash foam could be deployed to mitigate damages from a crash landing. The system could be programmed to quickly alert local authorities to the location of the incident, too, and even report that a gun has been discharged.

Attacking a drone might be tempting, but considering just how connected commercial drones will have to be to do their jobs they’ll be plenty of data to quickly track down incidents and perpetrators. So if you plan to go hunting for commercial drones in the future – the technology described in this patent suggests you better be able to aim well and move fast.