The biggest story of 2016: James Comey was Donald Trump's MVP — most valuable politician

Comey crossed a line previously uncrossed by law enforcement, and changed the outcome of a presidential race 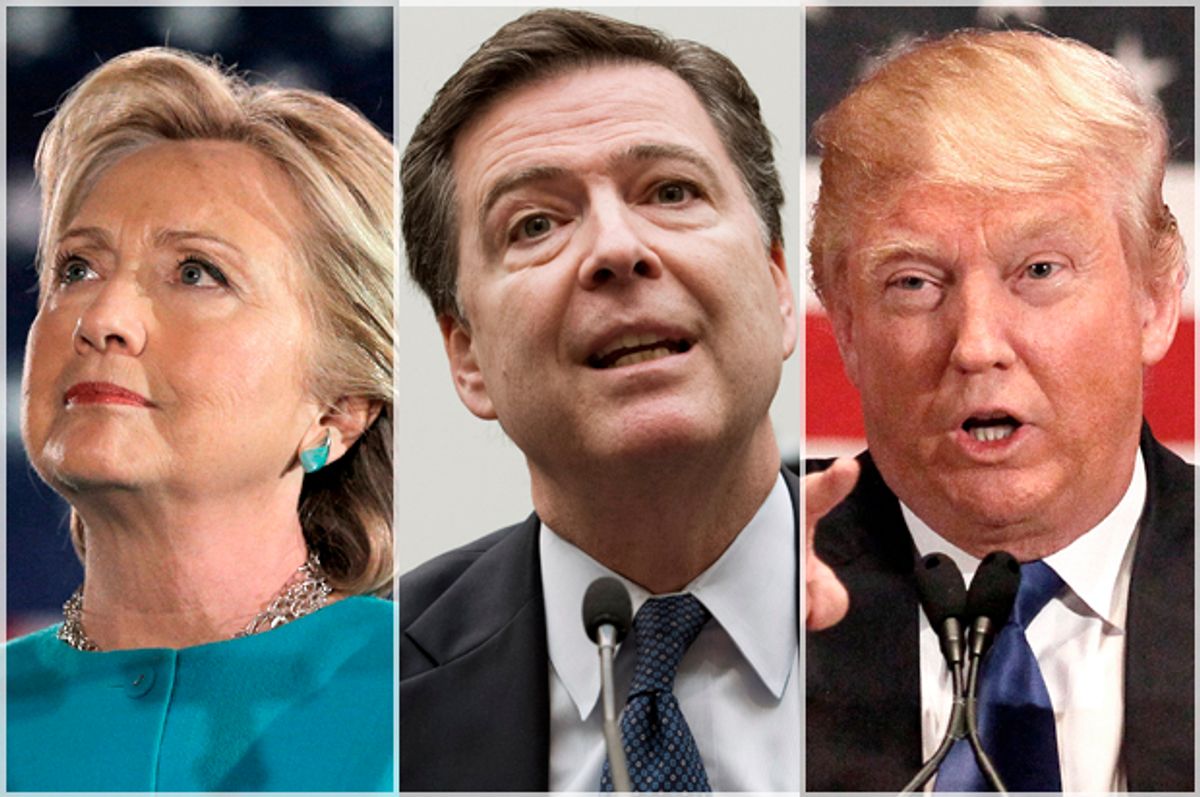 Barring yet another  disaster of some sort, yesterday was probably the last big news day of 2016  and it was a perfect ending to a crazy year. President Obama announced sanctions against the Russian government for allegedly meddling in the presidential election campaign. Imagine sitting where you are right now and reading that, say, 18 months ago. Now further imagine what you would have thought if the result of that alleged meddling was that Donald Trump became president of the United States. You would have assumed you were reading the Onion. But it happened.

Many things happened in this presidential election year, much of it unthinkable. We had terrorist attacks and mass shootings and a freak show of a campaign unlike anything we've ever seen before. The rave up ending, Trump's victory, was the shocking ending of all endings. There are a lot of reasons for it — after all, the election was decided by less than 80,000 votes across a few states. (Or, if you prefer the analysis of Donald Trump's pollster Tony Fabrizio, four counties in Florida and one in Michigan.)

Yes Hillary Clinton's campaign was flawed in a dozen different ways that could have made the difference, from failure to campaign in certain states to choosing the wrong message for vital constituencies. In a close election the smallest miscalculation can cost you the race. People will be arguing for years about her strategic and tactical decisions, which led to the weird result of a 2.9 million win in the popular vote mixed with an Electoral College loss.

And while the hacking of various Democratic campaign emails accounts and publishing them online can certainly be said to have fed a right wing-generated media frenzy around Clinton's email server,  it's not possible to declare it a definitive reason for the loss. (However, the national security implications and the significance for the Trump administration are only starting to unfold so it wouldn't surprise me if it becomes the big story of 2017.)

The big story of the 2016 election, the one which remains for me the most shocking and inexplicable, is the fact that James Comey, the director of the FBI, put a very heavy thumb on the scale which decided the election. It started back in July when he made inappropriate public criticism of Clinton even as he legally exonerated her. This is not something law enforcement is ever supposed to do, and it's certainly unethical to do it in a highly charged political case.  Donald Trump and the Republicans used that criticism as evidence that Clinton was still subject to prosecution and "lock her up" (and worse, like "hang the bitch" and "Hillary for prison") became sickening rallying cries at Trump campaign events. Close advisers and associates called for Clinton to be" shot for treason" and "arrested, tried, and executed."

The word "emails" became shorthand for alleged criminal behavior by Hillary Clinton.  Under pressure from these hysterical Republicans, Comey continued to violate FBI practice by turning over the raw investigative files to congress, which he released in pieces and the Republicans promptly leaked, keeping the controversy going as the press once again used screaming "email" headlines to report nothing new or significant.

Despite all that, Clinton was leading in the polls going into the final stretch. And then as people all over the country were already voting, just 11 days before election day,  Comey sent his famous letter to the congress announcing they had found some emails on a laptop that might or might not be relevant to the earlier Clinton probe. The Republicans in congress eagerly released it publicly calling it a "re-opening" of the case and the media predictably went wild, talking of little else for days and splashing the news across front pages all over the country.

Comey knew very well why doing this was improper. Shortly after he left his job as a high ranking official in the Bush Justice Department a serious scandal took place around the firing of certain U.S. Attorneys.  Recall this case from 2007:

David Iglesias of New Mexico, testified that he felt "leaned on" by Sen. Pete Domenici over a case he was pursuing. Iglesias said the New Mexico Republican and former mentor hung up on him after learning Iglesias would not seek indictments in a criminal investigation of Democrats before the 2006 election. "He said, 'Are these going to be filed before November?'" Iglesias recalled. "I said I didn't think so . . . to which he replied, 'I'm very sorry to hear that.' And then the line went dead. "I had a sick feeling in the pit of my stomach," Iglesias testified. "Six weeks later I got the call that I had to move on."

He wasn't the only one. That scandal was all about the Bush administration firing U.S. Attorneys for refusing to use the Justice Department to sully Democratic politicians' reputations in advance of an election. Nobody has ever used it as effectively as James Comey.

And there is simply no doubt that of all the possible reasons Clinton lost that very close race, Comey's actions were demonstrably definitive. According to Nate Silver Clinton had a 5.7 point lead on the day Comey sent the letter — and it had shrunk to 2.9 points just a week later. It's hard to believe there was a sudden rise in economic anxiety during that period that explains it. The Institute for the Study of Citizens and Politics did a post-election poll which showed that “Trump picked up 4.0 percentage points among people who hadn’t been with him in mid-October, and shed just 1.7 percentage points for a net gain of 2.3 points. Clinton picked up a smaller fraction — 2.3 points — and shed 4.0 points for a net loss of 1.7 points.” Both Clinton's and Trump's pollsters agreed that the Comey letter shifted the race.

The nepotism and conflicts of interest surrounding Trump even before he takes office are overwhelming. The alleged Russian meddling in the campaign is certainly very concerning. But the one event surrounding the 2016 election that sends a chill up the spine, and should be troubling to anyone who cares about civil liberties and the legitimacy of our democracy, is the fact that unethical actions by the top law enforcement officer in the country tipped the race. That someone in his position tipped it to the most openly corrupt candidate in American history is beyond ironic.

Donald Trump's victory is the story of 2016, but James Comey will always be remembered as the man who used the power of his office to pull him over the finish line.