Obama said the U.S. could take further, covert action — a reference to a counterstrike the U.S. has considered 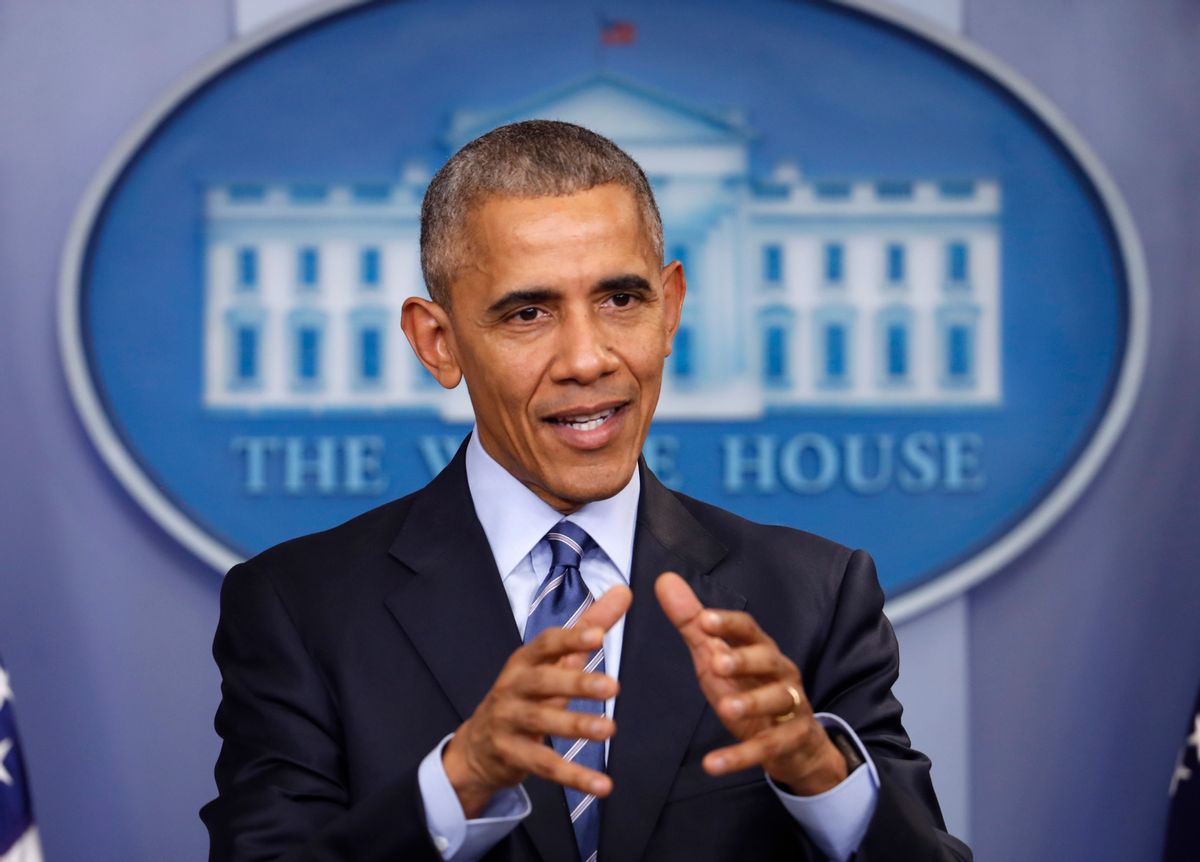 In this photo taken Dec. 16, 2016, President Barack Obama speaks during a news conference in the briefing room of the White House in Washington. President Barack Obama has imposed sanctions on Russian officials and intelligence services in retaliation for Russia's interference in the U.S. presidential election by hacking American political sites and email accounts. (AP Photo/Pablo Martinez Monsivais) (AP)
--

HONOLULU — The United States is unleashing a string of sanctions and other punitive measures against Russia amid allegations that it engaged in cyber-meddling in the U.S. presidential campaign, putting pressure on President-elect Donald Trump not to let Moscow off the hook after he takes office.

Russia's government threatened retaliation and continued to deny U.S. accusations that it hacked and stole emails to try to help Trump win. Trump said the U.S. should move on, but in a sign he was no longer totally brushing off the allegations, he planned to meet with U.S. intelligence leaders next week to learn more.

A month after an election the U.S. says Russia tried to sway for Trump, President Barack Obama on Thursday sanctioned the GRU and FSB, leading Russian intelligence agencies the U.S. said were involved. In an elaborately coordinated response by at least five federal agencies, the Obama administration also sought to expose Russia's cyber tactics with a detailed technical report and hinted it might still launch a covert counterattack.

"All Americans should be alarmed by Russia's actions," said Obama, who was vacationing in Hawaii. He added, "Such activities have consequences."

He said the response wasn't over and the U.S. could take further, covert action — a thinly veiled reference to a counterstrike in cyberspace the U.S. has been considering.

Yet the sanctions could easily be pulled back by Trump, who has insisted that Obama and Democrats are merely attempting to delegitimize his election.

As part of the punishment, the U.S. kicked out 35 Russian diplomats, in response to Russia's harassment of U.S. diplomats. They also shut down Russian recreational compounds in New York and Maryland that U.S. officials said were being used for intelligence.

It was the strongest action the Obama administration has taken to date to retaliate for a cyberattack, and more comprehensive than last year's sanctions on North Korea after it hacked Sony Pictures Entertainment. The new penalties add to existing U.S. sanctions over Russia's actions in Ukraine, which have impaired Russia's economy but had limited impact on President Vladimir Putin's behavior.

Russia called the penalties a clumsy yet aggressive attempt to "harm Russian-American ties." Putin spokesman Dmitry Peskov said Russia would take into account the fact that Trump will soon replace Obama as it drafts retaliatory measures.

U.S. relations with Russia have suffered during Obama's years in office as he and Putin tussled over Ukraine, Edward Snowden and Russia's support for Syrian President Bashar Assad. Maria Zakharova, a Russian foreign ministry spokeswoman, took to Facebook to call the Obama administration "a group of foreign policy losers, angry and ignorant."

It was unlikely the new sanctions, while symbolically significant, would have a major impact on Russian spy operations. The sanctions freeze any U.S. assets and block Americans from doing business with them. But Russian law bars the spy agencies from having assets in the U.S., and any activities they undertake would likely be covert and hard to identify.

"On its face, this is more than a slap on the wrists, but hardly an appropriate response to an unprecedented attack on our electoral system," said Stewart Baker, a cybersecurity lawyer and former National Security Agency and Department of Homeland Security official.

Indeed, senior Obama administration officials said that even with the penalties, the U.S. had reason to believe Russia would keep hacking other nations' elections and might well try to hack American elections again in 2018 or 2020. The officials briefed reporters on a conference call on condition of anonymity.

Though the FBI and Department of Homeland Security issued a joint report on "Russian malicious cyber activity" — replete with examples of malware code used by the Russians — it still has not released a broader report Obama has promised detailing Russia's efforts to interfere with U.S. elections.

The report has been eagerly anticipated by those hoping to make it politically untenable for Trump to continue questioning whether Russia was really involved. But U.S. officials said those seeking more detail about who the U.S. has determined did the hacking need look only to the list of sanctions targets, which includes the GRU head, his three deputies, and two Russian nationals wanted by the FBI for cybercrimes.

The move puts Trump in the position of having to decide whether to roll back the measures once in office, and U.S. officials acknowledged that Trump could use his executive authorities to do so. Still, they suggested that building the case against Russia now would make it harder for Trump to justify easing up.

U.S. allegations of hacking have ignited a heated debate over Trump's approach to Russia and his refusal to accept the assessment of U.S. intelligence agencies that Russia's government was responsible and wanted to help him win. Though U.S. lawmakers have long called for Obama to be tougher on Russia, some Republicans have found that position less tenable now that Trump is floating the possibility of closer ties to Moscow.

"While today's action by the administration is overdue, it is an appropriate way to end eight years of failed policy with Russia," said House Speaker Paul Ryan, R-Wis.

U.S. intelligence agencies concluded that Russia was trying to help Trump when hackers connected to the government breached Democratic Party computers and stole tens of thousands of emails that were then posted on WikiLeaks, some containing embarrassing information about Democrats. Clinton aide John Podesta's emails were also stolen and released publicly in the final weeks of the campaign.