Best of 2016: A salute to the women who made a bad year a whole lot better 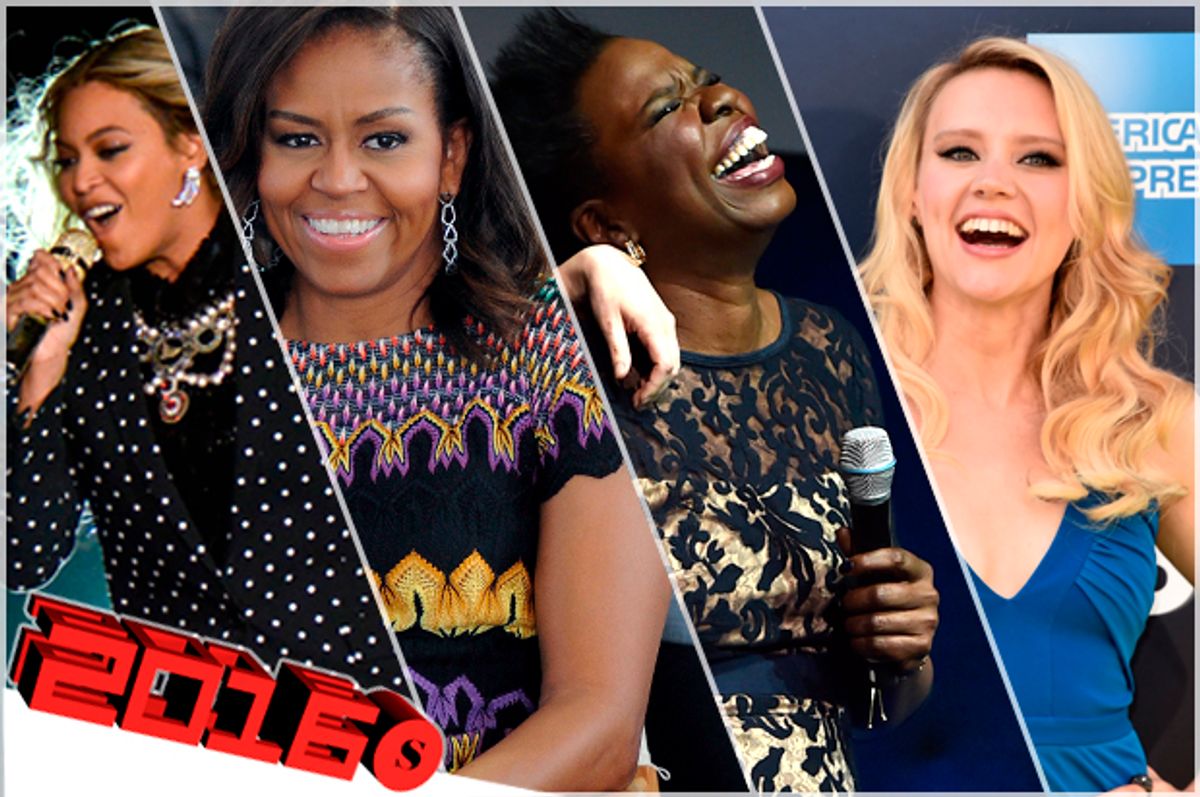 As the think pieces explaining every single way this year has been terrible continue to pile up, it's impossible not to note that 2016 has been an extra special terrible year for women. Reproductive rights have been challenged. Sexual assailants have given sympathetic narratives in the media and slaps on the wrist in court. And a man who bragged about grabbing women by the p___y was rewarded with the nation's highest office.

So praise be to those women who stood especially tall over a 12-month period that can only be described as the literal worst, who kept their senses of humor, who fought the good fights and who made a bad year a lot better.

The indomitable Jones held her ground against a swarm of bigots on Twitter — and in the process wound up being instrumental in getting Milo Yiannopoulos deservedly booted from the platform. Then McKinnon, whose Hillary Clinton impression for "Saturday Night Live" was so effortlessly hilarious before the election, gave a stunning, sincere rendition of Leonard Cohen's "Hallelujah" right after Clinton's loss and Cohen's death. Oh yeah, and this summer, they proved that bitches, in fact, gonna hunt ghosts.

Remember the Rio Olympics? Remember feeling happy and proud about things, America? That feeling was in no small part thanks to the unstoppable Ledecky, who charged into the history books with four swimming gold medals, and Biles, the breakout powerhouse gold medalist of the U.S. gymnastics team. Together, they provided several of the most dramatic, unprecedented, and straight up joyful moments of the whole games.

One of them didn't crack the ultimate glass ceiling, and another told Oprah recently she has no interest in trying. Yet even while not serving in elected office, the former and current first ladies both showed grace and hope; they spoke out strongly against misogyny, and they endured bigotry and  lies with unparalleled intestinal fortitude, showing exactly what it means to, in spite of everything, keep going high.

It's been a really good year for the director of "Selma." First DuVernay created, directed and executive produced the acclaimed OWN drama "Queen Sugar" Then she released "13th", her unflinching, couldn't-be-more-timely documentary on mass incarceration, currently available on Netflix. She's one of the most watchable filmmakers around, and luckily for us, she's also one of the most productive.

In her impassioned, outraged victim impact statement, the unnamed young woman described what she says happened to her after crossing paths with a man named Brock Turner at a party in 2015. She described the injuries to her body and her sense of self, she pleaded for sexual assault to be taken seriously as a crime, and she told other women,"When people doubt you or dismiss you, I am with you. I fought everyday for you. So never stop fighting."

What else can we say except that hearing the bad news from them made every surreal, demoralizing headline that came along — and there were multitudes — almost bearable?

It's not just because they're undeniably gorgeous and stylish. They also break the mold — Harlow for achieving unprecedented industry success with while sharing her own childhood bullying experiences because of her vitiligo, and Graham, for having such a knockout year, she's forever made the term "plus-sized model" out-of-date.

Thanks to the brilliant women who created and starred this year in their loosely autobiographical TV shows "Insecure,"  "Better Things," "One Mississippi," "Lady Dynamite," and "Fleabag," television has never had more hilarious, authentic, gloriously messy leading ladies.

The sisterhood: Beyoncé and Solange Knowles

It feels like a lifetime ago, but it was really only earlier this year that Beyoncé gave her knockout performance at the Super Bowl halftime show (sorry, Coldplay). She followed up with her furious, stunning visual album "Lemonade" and a world tour. But if she'd done nothing other than smiled as she wielded that baseball bat, she'd have already given us one of the most iconic moments of the whole year. And then this fall, her sister Solange released her own masterpiece, "A Seat at the Table." Soon after, the Knowles ladies became the first sisters to have number one albums in the same year.

She released a really funny cookbook that also happened to deliver on all its "spicy, salty, sticky, crunchy, juicy, oozy" promises. She also delivered her first child, and quickly understood that one of the best things about having babies is dressing them up funny. She continued to slay on Twitter.  Now if we could just get to her to run for president in 2020.