The Platinum Age of TV is producing lots of high-quality TV series. Here's our list of some of 2016's finest 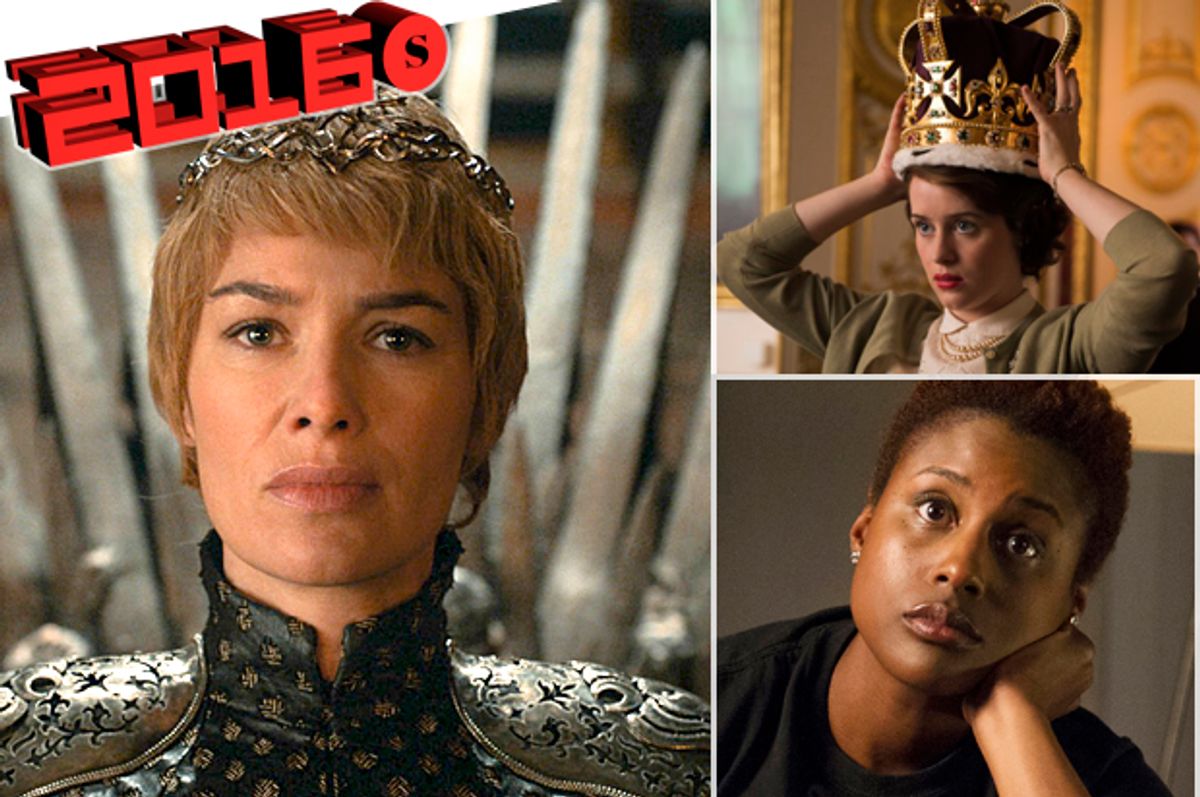 In a piece that ran earlier this week, I covered the reasons we loved watching TV in 2016, looking at the year in television as a collection of moments, scenes and characters. It was an incredible year for outstanding television, however. Thus in addition to that piece, here’s a (highly subjective) selection of series I consider to be the year’s best.

But how on Earth could I be expected to choose just 10? Impossible. Even selecting this list of 15, er, 17  (there was a three-way tie) was a stretch.

Before we get into it, please know that I didn’t “forget” anything. A great deal of consideration went into the creation of this list, so if a show isn’t on there — such as this enormously popular series or this multiple Emmy winner — there's a reason I didn't include it. (Among those reasons could be that said shows probably don't need my help or validation.) Next point: If your absolute favorite series isn’t on this list, that doesn’t mean it’s terrible or I’m not a fan. It could simply mean I haven't seen it. Unless we're talking about part of the "Real Housewives" franchise. I've seen my share of those monstrosities. They're terrible. I am not a fan.

Please keep all of this in mind while perusing this Best Shows of 2016 list, and feel free to share your own 2016 TV bests in the comment section.

Some of you may feel compelled to skip right on down to the comments section and hold forth on why including this NBC comedy about a big box store called Cloud 9 makes this the most ill-informed year-end list in the history of humankind.

“Superstore” does indeed adhere to all of the standard tones and beats of a broadcast sitcom, hitting its broad punchlines with a reliable rhythm. It’s also a show that reflects the diversity of working-class America in a humorous microcosm.

Much has been made about the ways in which the array of TV choices out there has serves to divide us. This series stands as a uniting force I’m hoping more people come to appreciate in 2017.

Television in 2016 was full of unreliable narrators, but Phoebe Waller-Bridge’s woman without a name takes the cake for making the viewer complicit in her self-delusion. I can’t think of another series that starts as one kind of thing, a comedy, and retroactively transforms into an altogether different animal in its final act.

As I wrote in my original review, Pamela Adlon’s series, which she co-created with Louis C.K.,  “finds comedy in. . . mundane moments, making it at once universal in tone and intimately autobiographical.” As the season developed, few series offered the sort of simple comforts that this show did each week, simply by allowing viewers to hang out with Sam Fox as she does her able best to raise three wildly different daughters.

In a year rife with outrage, the inheritors to Jon Stewart’s legacy each found their own specific ways to help viewers parse the madness. TBS’s “Full Frontal with Samantha Bee” electrified viewers with pointed analysis and a feminist filter. HBO’s “Last Week Tonight with John Oliver” took on the election, but also put its staff’s investigative skills to work to research several important stories on corporate greed and threats to public safety and health.

On Comedy Central, “The Nightly Show with Larry Wilmore” maintained a laser focus on issues of race and class. It was only beginning to find its stride when the network unceremoniously cancelled it. Bee and Oliver will be back in 2017; so, too, will Wilmore, though in a different setting. Not long after “The Nightly Show” went dark, he inked an overall deal with ABC Studios.

After five seasons spent clinging to the narrative of George R.R. Martin’s books, season 6 finally broke free of its literary bindings. Doing so transformed the drama from a respectable adaptation into an enjoyable TV series. The sixth season wasn’t perfect (we could have used a heckuva lot less Ramsay Bolton) but the story empowered its female characters in a way that mostly satisfied.  By culminated one of the most cinematically stunning battle sequences made for the small screen, “Game of Thrones” at last answered the question of why we put up with its misfires, insults and failings for so many years: underneath all its scabby flaws, it is still one of the most irresistible visions on TV.

At this point the inclusion of this animated Netflix series on various Best of TV lists seems obligatory. But this tragedy-masquerading-as-comedy is a perennial favorite among the medium’s analysts because of its deft portrayal of depression, addiction and alienation, all of which plague the series’ equine star even as his career is reviving.

At its finest and most creative, the series gave viewers its  “Fish Out of Water” episode. The majority of the action occurs underwater with little in the way of intelligible dialogue. Removing BoJack’s access to his greatest defense mechanism, the witty rejoinder, brings the character’s intense vulnerability and his failure to maintain honest connections into relief, and that atmosphere of regret permeates much of the show’s third season.

Issa Rae’s TV series debut boldly distilled the essence of what it’s like to be a young black woman navigating the professional sphere while (poorly) maintaining her personal relationships. As the series progresses Rae’s fictionalized version of herself shows the audience the challenges that come along with being an African American woman in mostly white spaces, as well as the class and power imbalances that can exist between men and women.That it does all this with a sense of humor and heart proves that we’ve only witnessed the beginning of this entertainment creator’s incredible talents.

8. “Orange Is the New Black” on Netflix

Gazing at it in the rear view mirror, this season of “OITNB” could have served as a warning to us for what was coming. Back in June I summed up one of the central plot points of season four: “When a maltreated underclass has had enough, and its collective rage boils over, chaos is sure to follow…and on its heels, tragedy.”  This season also featured one of the most disturbing and tragic character deaths on television, as well as a disquieting storyline about sexual assault, which premieres within a year marked by an electorate that signed off on its approval of rape culture and bigotry.

This is a time in which Americans are being asked to examine the ways that divisions along lines of race and class are tearing the country asunder, making comedies like “Black-ish,” a show that puts these issues front and center while inviting all viewers to the table, more important than ever.

In its second season, this ABC series took on the N-word, prejudice and police brutality, and while these issues may be seen as relevant to African Americans, “Black-ish” handled each in a way that never sacrificed its edge. Calling intelligently constructed television "engaging" is a common compliment. In this show’s case, episodes actually do engage with viewers, encouraging discussion and debate in addition to delivering uproarious laughter.

Anglophilia is not a necessary prerequisite to appreciate Netflix’s poignant examination of the early days of Queen Elizabeth II’s reign. All that’s needed is an enjoyment of meticulously executed plot and, as I wrote in my review of the series, dialogue that alternately caresses the ear and shreds the heart. There is no shortage of period pieces about British royals, but this one makes Queen Elizabeth II, and the woman behind the crown, Elizabeth Mountbatten, live and breathe for the audience, owing much of that achievement to a graceful performance by Claire Foy.

11. “Atlanta” on FX. This series found much of its comedy in its honest appraisal of the absurdity and discomfort that comes with being broke and African American while living in a major city. Creator Donald Glover didn’t expend much of the show’s energy on observations about dynamics between black people and white people, even in the show’s jaw-dropping “Juneteenth” episode, which took the idea of cultural appropriation to insane extremes.

Rather, its best episodes (such as the memorable “B.A.N.”) delivered thoughtful meditations on the value of fame and celebrity in a society that simultaneously celebrates black culture while vilifying those who produce it. Secondary to that mission, but no less vital, is the sweetness of these characters’ relationships, held together by bonds strong enough to withstand the intense strain that comes with just getting by.

The drama’s fourth and final season began with its main character Daniel Holden struggling to grasp what it means to live a world with windows and open paths, where nobody knows him as an accused rapist and murderer, but without the comfort and protection of his family. Its final episode is an allegory of true release as Daniel and his family finally reach a place of vindication, both in regard to the justice system and their collective spirit.

There is no more bitter enemy than a person’s own family member, a notion the show’s main character Jimmy McGill has yet to understand. Much of Jimmy’s undoing is his own fault, having spent a portion of season two chafing against the restricting environment of a law firm some may consider to be a dream job, then tempting fate by engaging in acts ranging from unethical to illegal, sometimes just for the fun of it.

Even after discovering that his older brother Chuck was standing in the way of his efforts to succeed as an attorney in season one, Jimmy is still disarmingly honest with him to a fault when the chips are down. As we see in the final moments of the season finale, that loyalty is going to cost him dearly, sending Slippin’ Jimmy further down the path toward transforming into Saul Goodman, the shady “Breaking Bad” lawyer viewers first came to love.

As the topic of Russian-U.S. relations takes on a new urgency, the political themes  in this ‘80s period piece feel ridiculously current. One would think that our current reality would make the exploits of Philip and Elizabeth Jennings, Russian spies working to bring about America’s downfall, less fascinating. The sad truth is that the burgeoning bromance between Vladmir Putin and Donald Trump only serves to make FX’s spy couple more worthy of our empathy. Unlike those men, they behave like actual humans do.

Race. Wealth. Celebrity. A prejudicial justice system. The actual murder trial of O.J. Simpson had it all, and it played with all the lurid intrigue of a primetime soap opera during its time. FX’s universally-acclaimed miniseries captured that fervor while drawing from an emotional source to take us into the various lives of its players outside of the courtroom.

In the same vein of many of the year’s best TV series, it served up an unflinching examination of gender and social discrimination. Most period pieces allow the viewer to sit back and appreciate how far we’ve come. This one hammered home, time and again, how little social progress has truly been made since that low-speed Bronco chase captured our attention in the summer of 1994. If we didn’t understand that message when FX’s limited series first aired is the spring, hopefully we do now.