The latest twist on the 2016 blame game has Stewart and Colbert paving the way for Trump. What about Fox News? 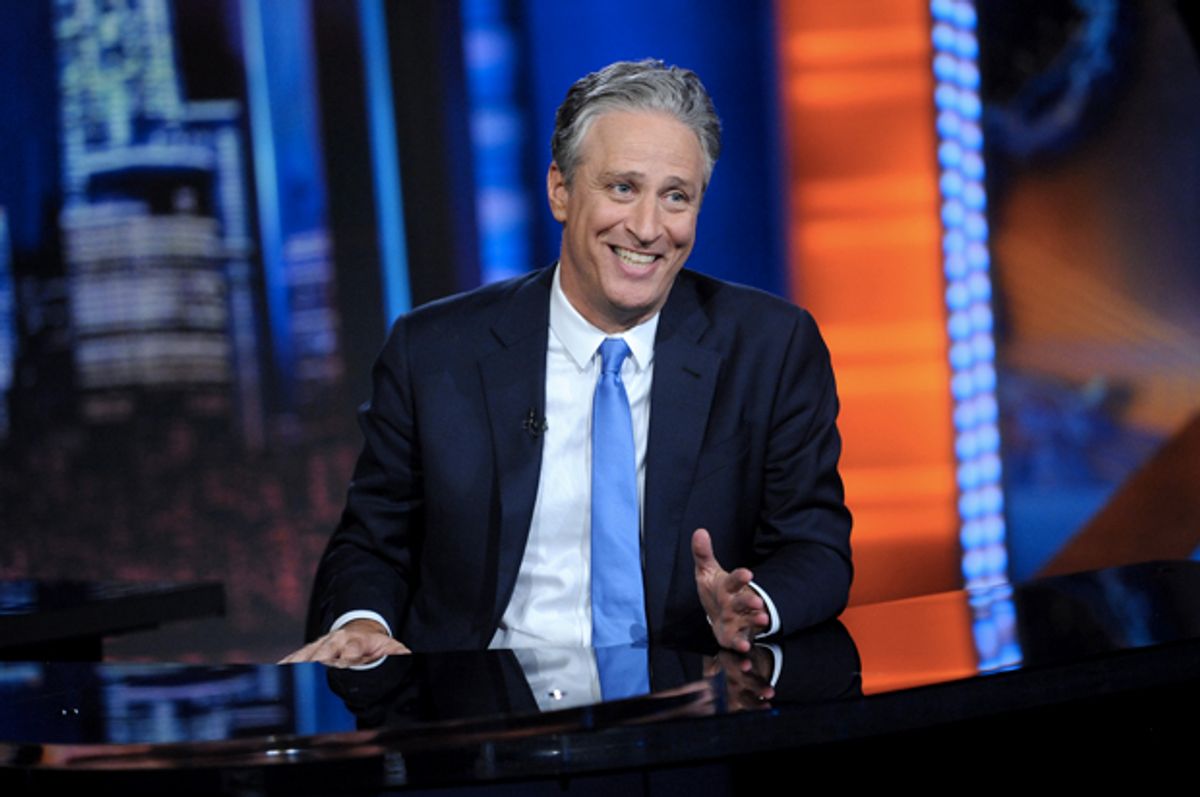 Well before the results of the presidential election were clear, the blame game was in full gear. If Hillary Clinton didn’t win, it was the Bernie supporters and the misogynists who were at fault. Or it was the narcissistic and clueless millennials and the stupid and desperate white working class. Then and now the Russians were at the top of the list. After the election, there were the pollsters. And, of course, who couldn’t resist blaming the fake news? But in the latest twist on the blame game, we now have a new set of culprits: Jon Stewart and Stephen Colbert.

It’s not the blame you would expect, either. They are not being blamed for ending their host roles on “The Daily Show” and “The Colbert Report” at a time when we needed them most; they are being blamed for starting their shows in the first place.

In a recent piece for the Columbia Journalism Review, Lee Siegel has written on “How Jon Stewart, Stephen Colbert blazed a trail for Trump.” Siegel’s arguments are not just a sign of a desperate need to point fingers in the wake of the Trump win; they are a sign of how even the left has become infected by post-truth thinking.

Siegel’s rambling piece makes a few main points — all of which are at heart completely nonsensical.

He first claims that Stewart and Colbert “helped create the atmosphere of ‘fake news’ (formerly known as gossip, rumor, dis- or misinformation) that helped elect Trump, and that currently has the media up in arms.” As I wrote in the wake of the post-election “fake news” scandal, there is a substantial difference between satirical fake news that depends on irony, critical thinking and questioning the status quo and misinforming fake news that preys on fear, bias and hysterical hyperbole.

Sure, deciding between the two modes can be messy at times, but that’s the challenge. If you can’t tell the difference between Andy Borowitz and Alex Jones, then you need to hone your reasoning skills.

Siegel blurs Colbert’s truthiness with Trump’s post-truth. He literally can’t tell the difference between irony and idiocy. As we enter the era of a reality-TV president we are going to need to get even better at those skills, not give up on them.

Siegel goes on to accuse Stewart and Colbert of negatively influencing the news media, leading it to dangerously confuse comedy, mockery and straight-faced reporting. He misses the point, though, that both shows repeatedly called out the news media for its failures to provide the U.S. public with much-needed information.

Siegel has the cause and effect inverted. The corporate news media was already a circus devoted to scandal and sensationalism well before Stewart and Colbert took the helm on their shows. Colbert and Stewart rose to fame precisely because they filled a gap the media had left open. Their viewers were repeatedly ranked as more informed than those of traditional news outlets. So Siegel’s claim reveals not only flawed logic, but also a basic inattention to facts.

He then goes on to equate Colbert and Trump: “In retrospect, Colbert’s bizarre appearance, as part of his general shtick, as a legitimate witness in the House of Representatives before a judiciary subcommittee on farming and immigration was a precursor to another reality-TV buffoon’s election to the White House.”

Siegel seems unaware that Colbert’s appearance was not the first time a satirist had appeared in-character before Congress. In 1906, Mark Twain, dressed in his signature white suit, addressed the Senate patents committee as he argued for the extension of copyright protection. His appearance helped urge Congress to act, much in the same way that Stewart’s support of the First Responders Bill helped get that legislation passed. In another example from 2009, The Yes Men pranked the Chamber of Commerce — impersonating them, creating a fake website and sending out a fake press release that claimed that the Chamber of Commerce was finally acknowledging climate change.

Siegel, of course, is not the first to go after Stewart and Colbert for not living up to a leftist standard for productive comedy. Back in 2012 Steve Almond wrote a piece for the Baffler that accused Stewart and Colbert of being in the satire business mainly for the money. He chastised the comedians for not having enough of a critical edge, for softening their comical punches so much that they actually reinforced the system rather than attacking it. According to Almond, “The queasy irony here is that Stewart and Colbert are parasites of the dysfunction they mock.”

Siegel pretty much parrots Almond, also keying into the idea that what went wrong with Stewart and Colbert was that they got rich off of their satire. He claims that the success of Colbert and Stewart mirrors the success of Trump with “The Apprentice,” thereby ushering in an era of media and money that has now taken over the White House.

Siegel’s seamless equation of the satire of Stewart and Colbert and the reality TV of Trump is probably his most depressing move. What hope do we have of navigating the Trump era if a well-known leftist critic can’t tell the difference between a show that depends on hyping a ruthless capitalist oligarchy and one that uses irony and wit to critique that very same system?

Now, one thing has to be made clear. It remains true that it is challenging to determine the exact extent to which satirists like Stewart and Colbert had a positive effect on our democracy and civic life. But that doesn’t mean that it is open season to speculate wildly.

In fact, we do have significant research that indicates a range of ways that satire has had a positive impact on our nation. Study after study shows that viewers of satire are sharper and more informed than those of other news outlets.

And in recent research on sarcasm we now know that sarcasm, when blended with trust, increases creative thinking. That was exactly what happened with Stewart and Colbert, who were voted as more trustworthy than many journalists and whose viewers consistently ranked among the sharpest in the nation. What’s more, even though Colbert and Stewart left their posts at Comedy Central, we have satirists like John Oliver, Samantha Bee and Lee Camp continuing the charge. Are they to blamed for Trump too?

Siegel’s next blow is to accuse Stewart and Colbert of creating the media echo chamber that is crushing this nation. He writes that “Their liberal politics, half posturing, half genuine, was excluding and asphyxiating.”

In a classic left move of bizarre self-mutilation, where it is more fun to attack fellow travelers than the real enemy, Siegel focuses on Stewart and Colbert, rather than on the one media outlet we can actually prove created an echo chamber: Fox News. Fox News, with its mesmerized pack of loyal worshippers tuned in to an endless stream of lies, played a major role in paving the way to a fact-free election.

As if this weren’t all depressing enough, there is one more piece to Siegel’s attack on Stewart and Colbert that should bother us. Back in 2006 it was uncovered that Siegel often responded anonymously to negative comments on his pieces for The New Republic. In fact, Siegel, writing under the pseudonym sprezzatura, defended himself against critical commenters who didn’t like an earlier piece he had written about Stewart.

That’s a weird, deceitful thing to do and it got him dumped from The New Republic for a while. But the even weirder thing is the crazy way he used these posts to promote himself and attack Stewart defenders. Check out the post he anonymously wrote in his defense:

“How angry people get when a powerful critic says he doesn't like their favorite show! Like little babies. Such fragile egos.. … Siegel is brave, brilliant, and wittier than Stewart will ever be. Take that, you bunch of immature, abusive sheep.”

Siegel later described the whole thing as a “prank.”

But here’s the thing. It wasn’t a “prank.” It was a sign of the thin skin and vicious temperament that has come to dominate too many of the voices on the so-called left.

In this way Siegel seems much like those in the Clinton camp who are looking for excuses for why folks don’t agree with them. Siegel can blame Stewart just as John Podesta can blame Russian hackers for revealing the dark underbelly of the Clinton campaign. While they are busy looking for what Colbert would call an “excusplanation,” they distract the public from the real issues.

Siegel, like so many others who have tried to make sense of the Trump win using knee-jerk logic and finger pointing, displays how one of the greatest casualties of this election cycle has been the way that so many on the left have abandoned nuance, critical thinking, and a commitment to using reality-based reasoning.

If a frequent contributor to The New Republic who has a piece in the Columbia Journalism Review can sincerely make the case that the reason why Trump won was because of Stewart and Colbert, things look bad. Because as long as we are chasing our tails with these wild speculations we can’t get to the serious business of figuring out how to advance a progressive platform in the face of one of the least qualified, most dangerous administrations of the modern era.

Across the political spectrum there is increasing evidence that “Americans believe crazy, wrong things.” In the post-Trump era there has been a real uptick in that sort of faulty logic among those who identify as Democrats. Today accusatory thinking trumps intelligent analysis and political polarization threatens productive civic engagement.

The great irony is that moving beyond these ideological silos was exactly what Stewart and Colbert advanced on their shows. As we prepare for a new year, let’s hope we can rescue the satirical critical thinking advocated by both Stewart and Colbert and leave the finger pointing behind.