The ballad of Bristol and Ivanka: Does Sarah Palin's eldest daughter want to be BFFs with Trump's? An investigation

Bristol's online musings suggest a desire to be the Gretchen Weiners to Ivanka's Regina George. How likely is it? 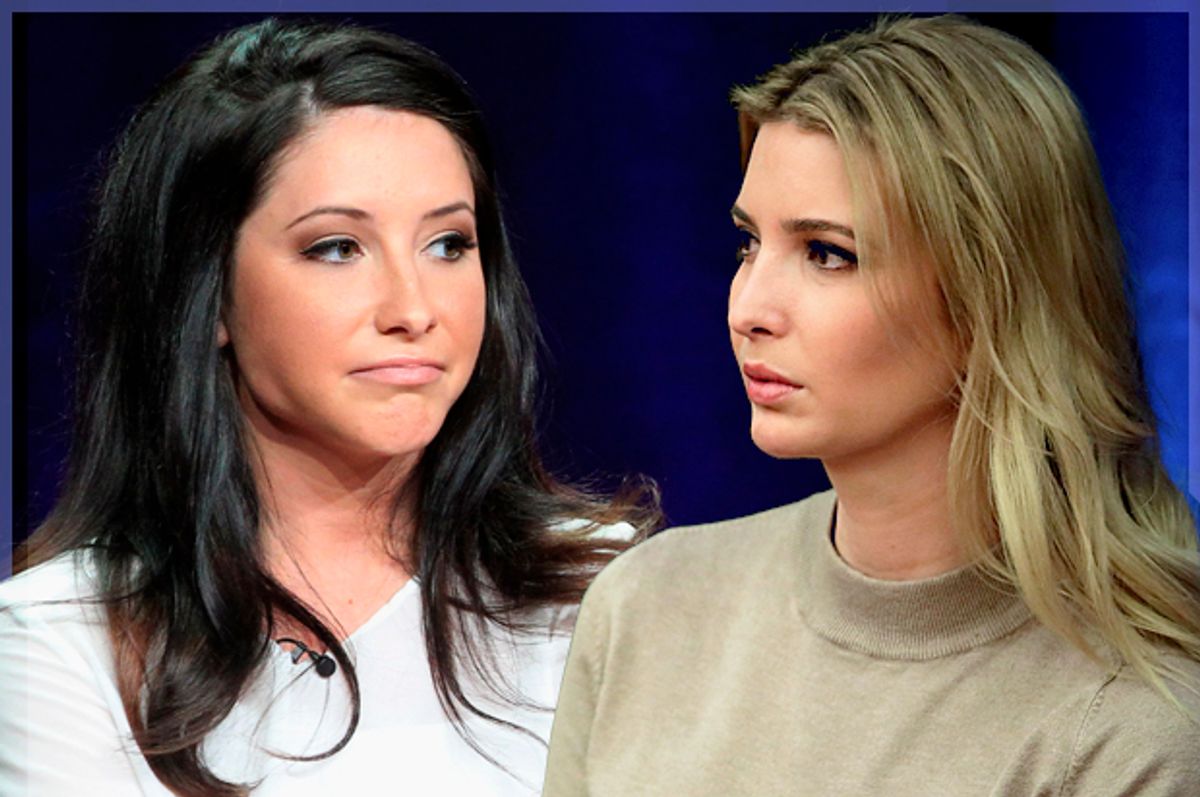 Bristol Palin hopped onto her totally non-ghostwritten Patheos blog on Wednesday to slam Hollywood A-list “sissies” like Elton John for refusing to perform at Donald Trump’s inauguration ceremony next month. “Isn’t it amazing how ‘not cool’ it is to be conservative in the public eye?” Palin wrote, allegedly, as if the absurdity of being caught playing “too cool” would make the likes of Aretha Franklin, she of the epic 2009 Barack Obama inauguration performance and hat, reconsider skipping Donald Trump’s totally dignified “America’s Got Talent”-soundtracked, "shorter" ceremony?

Bristol’s efforts were a bit lackluster, but you have to admire her willingness to defend the Trump family honor, given that it's practically a full-time job looking after the Palin reputation. But why would a mother of two with — as USA Today so delicately puts it — “an unconventional domestic history” take time out of her busy schedule of hate-reading "leftist outlets" to blog-shame Hollywood liberals spurning a swearing-in ceremony that three out of four living ex-presidents can’t even be bothered to attend?

Surely she’s not trying to distract the press from her mother’s call for Trump to Brexit us from the United Nations. All Palin press is good press, after all. And Bristol Palin stands to gain jack-squat from ingratiating herself with Donald Trump — she has even fewer qualifications for public service than most of his cabinet picks do (although to give her credit, Bristol has never let qualifications stand in the way). No, something more personal and equally futile must be afoot.

Who values loyalty to Donald Trump even more than Donald Trump himself? The troika of enforcers known as his eldest children. If she wants to be besties with Don Jr. and Eric, she can just invite them up to Alaska once Big Daddy rolls back the Department of Fish and Wildlife's ban on shooting wolves from helicopters. But to catch the eye of Queen Bee Ivanka herself calls for a more subtle — well, subtle for a Palin — approach.

The idea of Bristol Palin daydreaming about being the Gretchen Weiners to Ivanka’s Regina George is too sad to contemplate, but it makes a demented kind of sense, I imagine, to Bristol Palin, who may still be smarting from Meghan McCain’s public scorn. They’re both the eldest daughters of prominent maverick Republicans known for mangling the English language. Who else would Ivanka never have to explain herself to but Bristol Palin, fellow scion of a reality-TV political renegade, accomplished author, professional mother, lifestyle brand entrepreneur and sophisticated woman of the world? (No, NOT Chelsea Clinton!)

Bristol started the Ivanka Plan right around the time it became apparent that Ivanka had a shot at becoming first lady-daughter. When Ivanka gave birth to her third child back in March, after having hit the campaign trail hard for daddy during her final trimester, Bristol tweeted out congratulations that were well-meaning, kinda:

That's so Bristol! When that didn’t bond the two of them together in eternal bosom friendship, Bristol tried again with an ambitious declaration of platonic love in the Internet age — the tribute quiz.

“How Well Do You ACTUALLY Know Ivanka Trump?” should have been subtitled “No Really, I’m Serious, So Can You Introduce Me, I Swear I’m Not Obsessed?!” but is actually subtitled “Sure, you know about her famous dad. But how well do you know his secret weapon?” (Hey, it’s cheaper than coffee.) The quiz is maybe the saddest thing you could possibly read on Bristol Palin’s blog and still think it's written by a human and not a bot, and it is made up entirely of Wikipedia-level intel. How well does the Bristol-bot ACTUALLY know Ivanka? About as well as I do, as it turns out.

Where was she born and raised, Manhattan or the Hamptons? (Duh.)

What is her full name: Ivanka Marie Trump or Ivanka Donita Trump? (Donita? Bristol to intern: “Nobody’s going to choose ‘Ivanka Trogg Trump.’ God, I’ll do it myself.”)

What reality show did Ivanka turn down? (Spoiler: Not “The Apprentice”!)

How much is her net worth? How tall is Ivanka? Which of these three universities did she NEVER attend? Where was her wedding? When did she start modeling? What is her model sister-in-law’s name? (Vanessa apparently is a model!) What does she smell like? What’s her apartment’s security code? Is she really friends with Chelsea Clinton, eww!

I scored a whopping 86 percent on the quiz, so I apparently “have an Advanced Degree in Ivanka.”

Oh, Bristol. That’s not what an advanced degree is at all.

You can’t blame Bristol for switching up her game after that— if direct appeals to Ivanka's vanity don’t succeed, sucking up to the family name isn’t the worst Plan B (no pun intended). After all, the Trumps and the Palins are second only at this point in our ignominious televised collective shame to the Kardashians, and in a more just universe — the one in which Ivanka might recognize Bristol, if Bristol gave Ivanka a microdermabrasion facial — these two women would surely be allies.

But why bother in the first place? When it comes right down to it, despite their surface similarities, Bristol and Ivanka hail from two different worlds. Alas, Bristol Palin is not likely to show up in Ivanka Trump's Instagrammed inner circle any faster than the rest of us will. Like all the other Ivanka Girls, she can press her nose up to the Trump Tower glass for the next four years to no avail, because what’s more important here is that Ivanka Trump does not know Bristol.

Despite her mother’s ill-fated veep candidacy that launched pregnant, unwed Bristol and her siblings into the national spotlight, where they have more or less lingered thanks to reality television and gossip blogs, Bristol leads a weirdly average and decidedly non-"elite" life. She put off marriage but not kids, as more and more millennials are doing for reasons that would likely never cross Ivanka Trump's mind. Bristol graduated from Penrose, not Penn, and has worked in an Alaska dermatology office for the last seven years, with a scant one-month maternity break after giving birth to her daughter Sailor. Her stomping grounds are Alaska and suburban Arizona, not Trump Tower. Bristol's life might not be normal, exactly, but it's a lot closer to the average young American woman's than Ivanka's.

And it's not like she would be alone if she wishes Ivanka Trump would become her bestie overnight — Trump's daughter will allegedly be the one person in his administration looking out for women, including #WomenWhoWork. Don't we all hope, as Nancy Pelosi surely does, that Ivanka will be able to be a strong force in favor of what Anne-Marie Slaughter called "the care agenda" on behalf of women in the Trump administration? Is Bristol really doing anything Sheryl Sandberg didn't by reaching out, albeit in her own "not cool" Palin way? Aren't we all hoping that Ivanka will tap into that famous noblesse oblige and powers of Daddy-persuasion to push for policy changes that she doesn't need, but can be made to understand that the rest of us do?

Bristol, you're not alone. It's possible an entire nation of women are engaged in a bit of wishful thinking here, too.

If it's any consolation, there is hope for a Palin/Trump alliance. If any member of the Palin family is going to become BFFs with a Trump girl, the smart money’s on little sister Willow braiding Tiff Maples’ hair at Coachella and the two of them riding off together into the Silver Lake sunset, a bong in one hand and a lease for a boho-styled house-share in the other. If that does happen, Bristol, please text Willow and ask her to ask Tiffany to pass a note to Ivanka on her annual invited visit to Big Daddy's house, on behalf of all of us. Write this down: Paid leave for all new parents, no cutbacks on women's healthcare coverage in whatever will replace the ACA, equal pay for equal work, affordable childcare, an increase in the minimum wage, support for affordable housing, financial relief for student loans and college tuition. There's more where that came from. We're counting on you, Bristol. We could all use a woman on our side for the next four years.