Did fake news kill Alexander Hamilton? False information is nothing new — but we need new standards of transparency

At least the pace was slower in 1804. Today, it's too easy for those who spread lies to cover their tracks 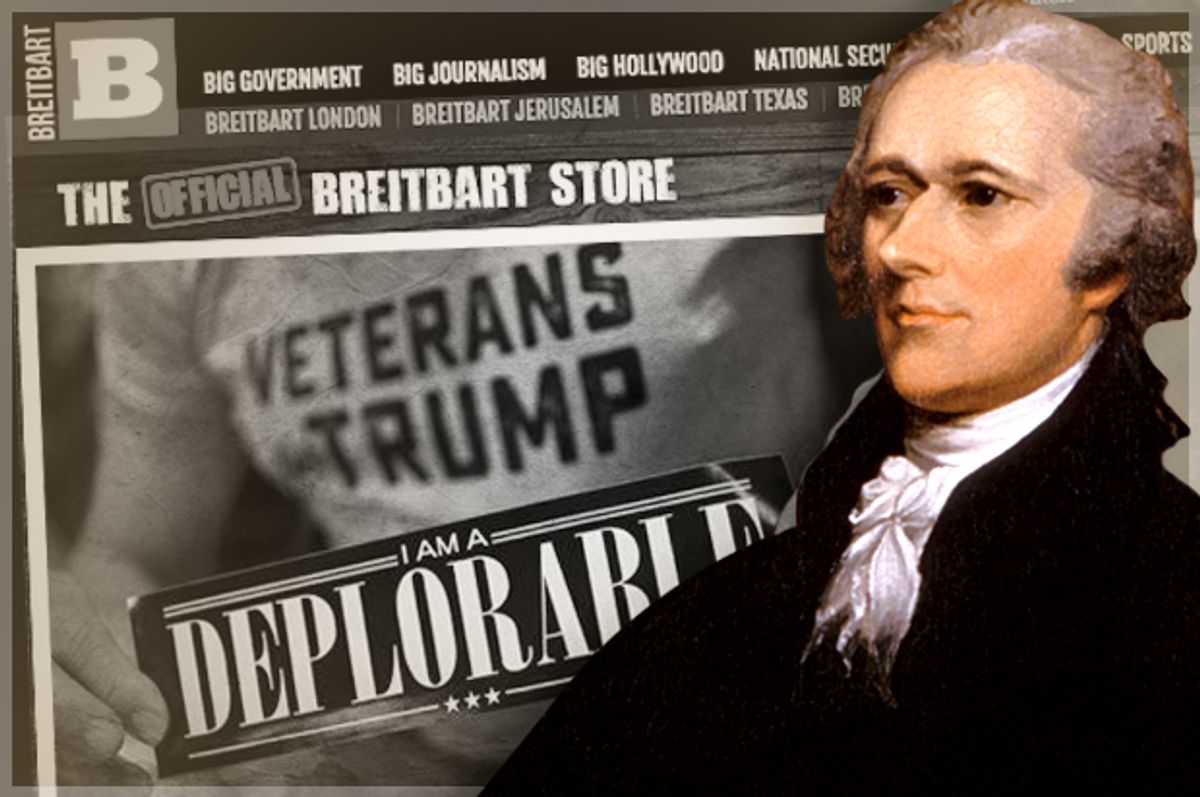 Did fake news kill Alexander Hamilton? In April of 1804, the Albany Register published a signed letter relaying Hamilton's judgment that Aaron Burr was "a dangerous man, and one who ought not be trusted with the reins of government," and claiming to know of "a still more despicable opinion which General Hamilton has expressed of Mr. Burr." It’s reasonable to imagine that this was exaggerated for the purposes of defeating Burr in the New York gubernatorial election, but at least it was clear to Burr who was behind this.

Let’s jump to 2016 -- don’t worry, there is more about Hamilton later on -- where it became way too easy to mask who is truly promoting digital content. This has created an enormous loophole for anyone with advertising dollars to drive the massive dissemination of misinformation and propaganda while hiding behind anonymity. To fight the manipulation of our electorate, we desperately need more transparency in digital advertising.

Fake news is a vague term. I’ve seen it used in stories about blatantly false information, the sort of things that make it to Snopes to be debunked. I’ve also seen it used to describe propaganda, or clickbait used to sensationalize legitimate content. However you define it, fake and sensationalized information, especially content being used specifically for propaganda, is shared by those who want to believe the story. In theory, that shouldn’t change the dynamics of a political race, as those people already feel strongly one way or another. Reaching those who might be on the fence with powerful propaganda would have a more significant effect. You can’t guarantee reaching the right voters, however, without making use of digital advertising.

In what must be driven by a sense of irony, Buzzfeed has been beating the fake news drum loudly. They recently commissioned a survey with Ipsos and declared that “Most Americans Who See Fake News Believe It, New Survey Says.” However, the data doesn’t quite justify the headline, since absurdly fake news has such a low rate of recall compared to “legitimate” news.

Those who remember fake news and believe it make up a very small percentage of respondents. In today’s world, people are so overwhelmed with information they will easily forget much of what they read on social media. Perhaps seeing something just once would make a small impact on someone’s perception, but repetition is key if you want to make a much larger impact. Repetition requires money. That’s why the biggest problem with fake news is not some social media algorithm that determines which of your friends’ posts you are most likely to see. The real problem revealed in this election is the lack of transparency in digital advertising. Trump’s campaign has already admitted to investing heavily in crafty digital efforts to suppress Hillary Clinton’s support, but there is evidence that third-party organizations did the same thing.

How would someone go about doing that? By setting up a fictitious news organization to spread the propaganda they want, and then promoting the right traffic to it. A company or even a foreign government could easily fund advertising to drive traffic to this content without anyone knowing the true source. Forget SuperPACs, their secret donors and the cliché-driven TV ads that have little impact. We’re talking about an anonymous source or sources that successfully drives the right content to the right eyeballs. Whether it is meant to discourage and suppress voting or give soft supporters a reason to reconsider their vote, it is much more effective than trying to reach those who likely ignore ads in other mediums.

Here is an example. You may have seen these on some of the websites you frequent.

There are a number of different native advertising companies that serve these ads. The best of these companies make it difficult to run political content without a disclaimer, but many others make it simple to promote content without disclosing who is actually paying for it. The ad in the middle is from the Hillary Victory Fund and was an overt attempt to raise money. The one on the left was pushing content about Bill Clinton’s supposed illegitimate son. The individual seeing these ads must have been both a target for potential fundraising by the Hillary Victory Fund and a persuasion target by whoever was trying to promote the content framing the Clintons in a negative light.

Who is “Choice or Life”? According to the site's about page, it is “an independent site that provides an alternative way to learn and gather information about politics around the world.” The domain was registered by proxy in October 2015. While we can’t rule out the Russians, the IP address where it’s hosted points to Washington state. Maybe it's a somewhat legitimate media company that made ad revenue by driving rabidly anti-Hillary traffic to their site. Or maybe this site (and others that sprouted up around the election) was part of a concerted effort to spread lies and misinformation about the Clintons. The people or organization that actually paid for the ad might not have even been this “Choice or Life” website. The fact that it is so easy to reach voters with this content without revealing who is behind it should frighten us all.

This is all going to get much worse during the Trump administration. The president-elect has shown little interest in the importance of facts. With the ability to mask promotion of content so easily, who knows what forces will be assisting the right in spreading propaganda? The only answer to this is greater transparency in digital advertising. Misinformation and propaganda will always exist, but we can better combat it if we know who is behind it. FCC regulations require buyers of televised political ads to identify an officer of their group to the television station, and require the local TV stations to make that document available for public inspection, along with other details of the ad purchase.

Unfortunately, there is no similar requirement for digital advertising with the FCC. There are disclaimer requirements from the FEC (although it’s questionable whether they could break a 3-3 deadlock to enforce the requirements), but in this case “Choice or Life” might claim it is the site's First Amendment right to publish and promote propaganda about the Clintons. With the incoming Trump administration and Republican Congress it’s doubtful any regulation will be passed to close this digital loophole.

If we want to address this quickly, advertising companies should change their own policies to make such transparency more available. Some advertising companies in the past have disclosed spending by political advertisers. The native advertising method outlined above could have been promoted by anyone, but a company could address this by displaying who sponsored the content (if it isn’t the site it is directing you to) and by requiring political entities that use companies like Outbrain and Taboola to make use of a disclaimer similar to the one employed on Twitter (with a special check mark).

Facebook could change its policies to release statistics on how much money political entities are putting into promoting articles on a voter’s newsfeed. Companies who host advertising could ask themselves if they are making money from a brand-new media entity that is only promoting political content. If it is actually political advertising, they should remind the advertiser of political disclaimer requirements. These are not easy changes for companies to make, but absent any government action to ensure that misinformation is not spread by unknown entities with vast resources, it is the right thing to do, both ethically and for the long-term health of their business. Allowing or enabling the spread of fake news has already led to a backlash against some sites and it will only be a matter of time before this method of propaganda is used to take down the companies themselves.

Going back to the year 1804, Alexander Hamilton gave a speech on behalf of the defendant in People v. Croswell, a case that resulted in an appeal (and a tie decision) in the U.S. Supreme Court and in many ways shaped how our country views libel. I recommend you read more about it if you haven’t before. In Hamilton’s famous speech, he said:

In speaking thus for the Freedom of the Press, I do not say there ought to be an unbridled licence; or that the characters of men who are good, will naturally tend eternally to support themselves. I do not stand here to say that no shackles are to be laid on this licence.

I consider this spirit of abuse and calumny as the pest of society. I know the best of men are not exempt from the attacks of slander. Though it pleased God to bless us with the first of characters, and though it has pleased God to take him from us and this band of calumniators, I say, that falsehood eternally repeated would have [affected] even his name. Drops of water in long and continued succession will wear out a [diamond]. This therefore cannot be endured.

The world has changed a lot since Hamilton gave this speech. Today, I would imagine that the Hamilton-Burr feud might have played out on Twitter, where maybe some third party could have mediated the situation and no one would have died. Instead, a questionable quote in a paper, referencing something Hamilton may or may not have said, resulted in escalation via letter writing and eventually a duel. You know how that story ended. Regardless of how our media has changed in the past 212 years, the same principles apply: A falsehood repeated over and over can cause immense damage. And it is even more damaging when the source of advertising around those falsehoods is unknown. I’m not naive enough to think this can change overnight, but the future of our democracy will depend on it. If we really are in danger from fascism, it’s going to be up to the companies that drive the greatest reach in the digital age to ensure greater transparency about who is behind the fast-growing propaganda machine.

Keegan Goudiss is a partner at Revolution Messaging, leading the digital firm's award-winning online advertising for progressive issue and political campaigns. He served as director of digital advertising for Bernie Sanders' 2016 presidential campaign.