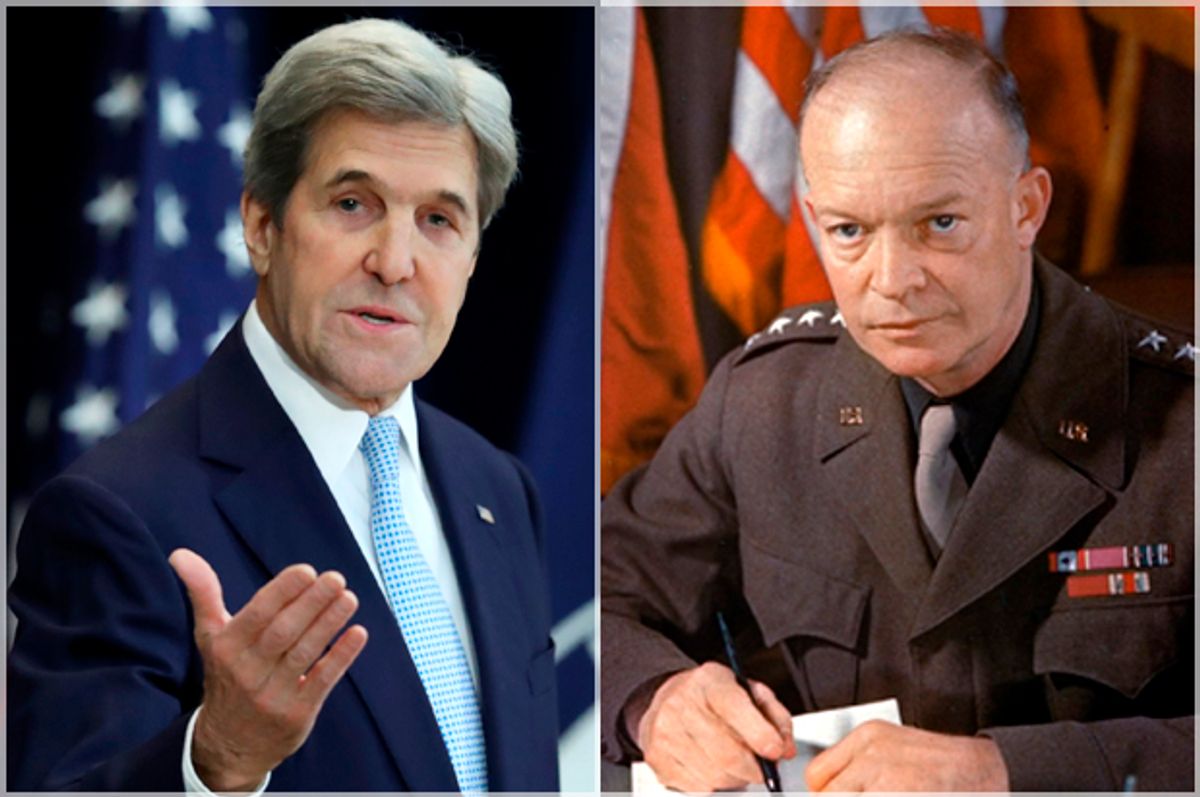 Now he tells us – just as he’s leaving power.

In his gloves-off warning about Israeli settlements, Secretary of State John Kerry evoked his inner Dwight D. Eisenhower, speaking hard truths about a monumental global crisis, just before stepping down from office.

In January 1961, President Eisenhower warned of the “unwarranted influence” and “potential for the disastrous rise of misplaced power” by the “military-industrial complex.” It was a powerful and prophetic warning, one which, if issued years earlier, might have empowered Ike to confront the issue directly. But three days after giving that speech, he was no longer president.

In his speech five days after the U.N. vote, Kerry repeatedly decried Israel’s occupation, its “web” of military checkpoints that severely restrict the movements of ordinary Palestinians, and most of all Israel’s incessant building of settlements. “Settlement expansion and the seemingly endless occupation,” Kerry said, “are combining to destroy hopes for peace on both sides and increasingly cementing an irreversible one-state reality.”

But Kerry, like Ike, is coming late to the truth-telling.

Without a doubt, the secretary spoke bluntly. He declared that “the settler agenda is defining the future of Israel,” making “a contiguous Palestinian state impossible.” He even evoked the Palestinian “Nakba,” or catastrophe, when some 750,000 Palestinians were dispossessed and forced into exile during the creation of Israel in 1948.

But words only go so far. Kerry had four years, and the Obama administration eight, to go beyond eloquent speeches and diplomatic cajoling to apply direct economic and political pressure on Israel to stop settlement construction. The last time that happened was in 1992, during the first Bush administration, when Secretary of State James Baker threatened to withhold funds unless Israel stopped building settlements on Palestinian land. “The choice is Israel’s,” Baker asserted, making clear the difference between the superpower and the client state.

Since September 1993, when Bill Clinton rang in the Oslo Accords with Israeli Prime Minister Yitzhak Rabin and PLO chairman Yasser Arafat on the White House lawn, no U.S. administration has brought such pressure to bear. Facing no genuine consequences, Israel has continued to entice Israelis, with major state subsidies, to settle on Palestinian land in the West Bank -- from  109,000 settlers in 1993 to more than 400,000 today. That doesn’t include East Jerusalem, where some 17 Jewish settlements now surround Palestinian neighborhoods, all but cutting them off from the West Bank and putting a dagger into hopes that East Jerusalem can be the capital of an independent Palestinian state.

Thus the Oslo “peace process,” ostensibly created to birth a two-state solution, has instead facilitated its destruction. The U.S. has been directly complicit in that deed. Its enabling of an out-of-control ally -- underscored by the recent 10-year, $38 billion military aid package to Israel -- created the “one-state reality” that Secretary Kerry so eloquently decries.

That reality is clear to anyone who has traveled to the Holy Land in recent years. I’ve been there some 15 times since 1994, and I’ve watched as lines of settlements connect to confine the Palestinian population into an archipelago of ever-shrinking enclaves, isolated from each other and controlled by nearly 500 checkpoints, roadblocks and other “closure obstacles” -- this in a West Bank the size of Delaware, our second-smallest state. The occupation, which will mark its 50th anniversary next June, has deeply scarred generations of Palestinians, humiliating adults and children alike with body searches and endless delays as people attempt to reach work, school and family in nearby yet increasingly unreachable towns.

While some of this is reversible -- checkpoints can be taken down -- the settlement and accompanying military infrastructure, which divides Palestine from itself, is massive and entrenched.

How unhelpful it was, then, that in his speech this week, Kerry continued to prop up the zombie known as the two-state solution. Yet in 2013 he warned that “the window for a two-state solution is shutting,” adding that the window would be open for two years at the most, “or it’s over.” In other words, by Kerry’s own estimation, the two-state solution died in 2015. In its parting shot at the extremist Netanyahu government, the Obama administration is thus pleading for a “solution” it must know is no longer possible.

When Kerry this week warned of “segregated enclaves in the middle of the West Bank with no real political rights; separate legal, education and transportation systems; vast income disparities, under a permanent military occupation that deprives [Palestinians] of the most basic freedoms,” he was in fact speaking of the present, not some future reality. “Separate and unequal” is not “what you would have,” as Kerry said, but what we do have.

The potential irony of American extremists overseeing Middle East policy in a Donald Trump administration is that finally the single-state, Jim Crow reality will be clear. Trump’s selection for U.S. ambassador to Israel, bankruptcy lawyer David Friedman, is deeply entrenched in Israel’s settler movement. Trump also suggested that his son-in-law, Jared Kushner, could have a major role in future “peacemaking” efforts. Kushner, a real estate broker with zero diplomatic experience, has arranged meetings between Trump and casino magnate Sheldon Adelson, a champion of the settler movement. All favor moving the American Embassy from Tel Aviv to Jerusalem, a direct attack on Palestinian aspirations to make East Jerusalem the capital of its sovereign state.

These moves, along with Israel’s promised settlement expansion, are direct attacks on the longstanding U.S. policy of two states standing side by side in peace. Destructive as they are, they help clarify that the reality on the ground is a single, apartheid-like state with perpetual Israeli occupation and dominance over Palestinian lives.

“If no Palestinian state, & no equal rights,” tweeted Matt Duss, president of the Foundation for Middle East Peace, “then it’s apartheid. Let’s have that discussion.”

With the two-state myth shattered, a new solution based on justice and equal rights -- fueled by nonviolent actions such as boycotts, Palestinian petitions to the International Criminal Court in the Hague and continued international isolation of Israel -- can finally emerge as widely accepted next steps. A just resolution will likely never involve a Trump or Netanyahu government, but perhaps, in the not too distant future, history will pass them by.