Recipe for a new Camelot: Donald Trump needs to ask what he can do for the country first 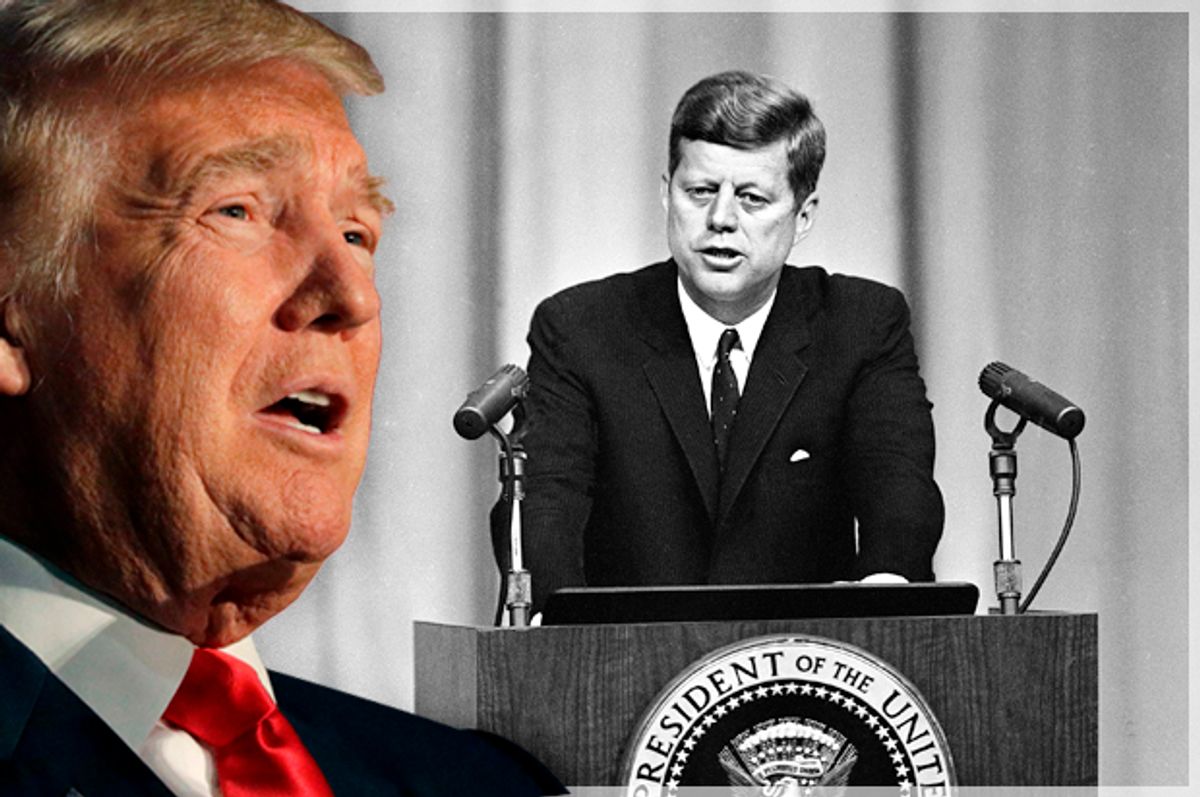 Obviously President-elect Donald Trump isn’t the shy type, and whatever his presidency becomes, it will be rendered in bold strokes. Bill Gates, Microsoft cofounder and the richest person in the world, said in an interview with CNBC last month that he thinks Trump has the potential to cut a John F. Kennedy-like figure. This is a clearly a high bar, and based on Trump’s campaign behavior alone, one that he was unlikely to clear. But Trump appears to be shedding the more incendiary components of his campaign persona now and taking a more palatable approach as Inauguration Day nears.

"You know, a lot of his message has been about things where he sees things not as good as he'd like," Gates told CNBC. "But in the same way that President Kennedy talked about the space mission and got the country behind that — I think that whether it's education or stopping epidemics, other health breakthroughs, finishing polio, and in this energy space — there can be a very upbeat message that his administration is going to organize things, get rid of regulation barriers, and have American leadership through innovation be on of the things that he gets behind."

If JFK changed the borders of humankind’s imagination, it was through his sentiment that “There are those that look at things the way they are, and ask why? I dream of things that never were, and ask why not?” When Trump ran it appears he was motivated by his dream of becoming the world’s biggest celebrity — why not? This apparent motivation is what terrified so many of us — we didn’t want to elect someone who placed commitment to himself over commitment to public service. But regardless of his motivation, the electoral outcome has now morphed that ambition into something much bigger than himself, and the fact that Trump completely reset the American psyche opens the door for something new and improved.

There's no doubt this was a change election. An Associated Press-Times Square Alliance poll released Monday found that 55 percent of Americans believe things will be better in 2017 than in 2016. That's a 12-point increase from last year's poll. The change, the delta in the polling, was people moving from status quo (e.g. things would stay the same) to feeling positive about 2017 versus the past four years. After the failure of Obamacare, the doubling of our national debt, the rise of ISIS, the decline of American Exceptionalism and more, it's no wonder that people are looking forward to relief. The stock market hitting record highs, home values rising, and now people feeling new optimism gives reason for hope in 2017.

Besides the optimism, the poll also found a lack of perceived catastrophe. Despite the melodrama and the gnashing of teeth by some about how cataclysmic 2016 was, Americans overwhelmingly — some 77 percent — said that 2016 was as good or even better in their personal lives than 2015. Just 22 percent said it was worse. No, the sky did not fall. And for the country itself, 65 percent of Americans said we were as good or better off in 2016 than in 2015 (33 percent said things got worse). And compared to 2016, more people said that 2015 was worse than 2014.

Economic analyst Larry Kudlow, an adviser to Trump, recently published a book outlining the similarities between JFK’s policies with those of Ronald Reagan (Kudlow recently appeared on Salon Talks discussing the book). Kudlow, a Democrat-turned-Republican, writes in "JFK and the Reagan Revolution: A Secret History of American Prosperity" on how both JFK and Reagan embraced the principles of limited government, low tax rates and a strong dollar. Kudlow wants to reintroduce these ideas under Trump.

There’s also the question of a Trump family dynasty, and whether this White House could start a neo-Camelot narrative. Ironically, many liberals today are enamored with the Camelot mythology, even after President Kennedy named his brother Bobby attorney general. Forbes ran an interview with Trump’s son-in-law Jared Kushner, pointing out that it's unlikely Kushner can hold a formal position in the Trump White House because of nepotism laws signed by Lyndon B. Johnson after JFK to prevent the president from giving government roles to relatives — including in-laws.

Yet there is a legitimate concern that the Trump children are heavily embedded in the president-elect's business. Ivanka, Eric, and Donald Jr. have top roles in running their father's enterprises. That is why they cannot be the head of a true blind trust and that is why bringing them into the White House could exacerbate the potential for untoward financial behavior. It would be far less concerning for Ivanka to sit in on a meeting with the Japanese PM if she weren't in the throes of closing a licensing deal with Sanei International, whose largest backer is the Japanese government.