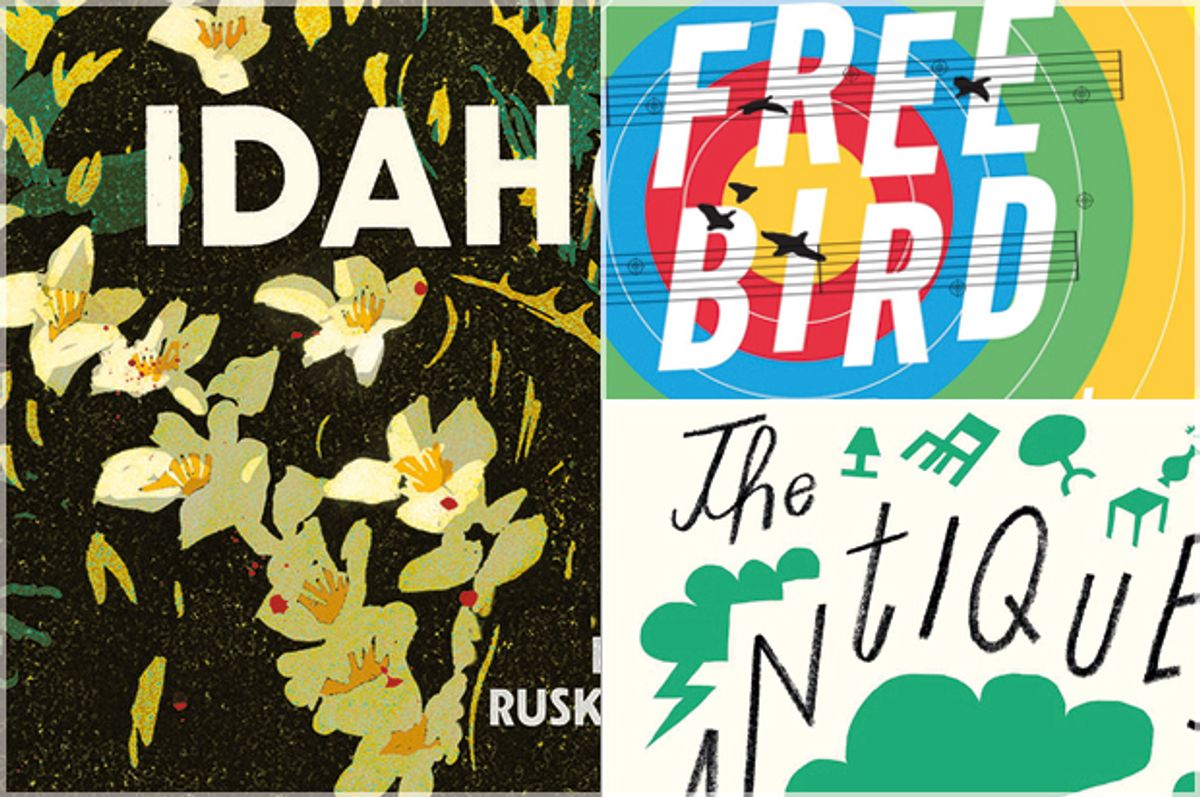 For the first wave of new books to come out in 2017, I posed a series of questions — with, as always, a few verbal restrictions — to five authors with new books: Kris D’Agostino ("The Antiques"), Derek B. Miller ("The Girl in Green"), Ottessa Moshfegh ("Homesick for Another World"), Jon Raymond ("Freebird"), and Emily Ruskovich ("Idaho").

Miller: Converging parallels. Moral choice. Authority. Obedience and disobedience. Americanness. Britishness. Frenchness. Scandinavian women. Arabs and Kurds and ISIS. Bravery and the opposite. Consequences. Women and war, women and peace. Thinking and not thinking. Growing up or refusing to. Cultural difference and universal  humanity. Seeing and being seen. Listening vs. hearing. History and the present. And humor. Lots of humor. The kind that could split a rock.

Ruskovich: My family's hound, my childhood on Hoodoo mountain and my little sister taking a bath in a garbage can filled with sun-warmed water, a song my dad wrote when he was nineteen, my old high school in Coeur d'Alene, the emotional turmoil of my old Barbie dolls, my mom's quiet habits combined with her intensity, her obsessive memory of her childhood, my husband playing the piano, my husband's writing, and a feeling I had once on a distant mountain gathering firewood, a feeling that a life can change in an instant, based on an impulse, a momentary lapse of self.

Miller: My entire education, experience, and life. What other possible answer is there?

Raymond: The numbers on my grandfather's arm as he reached into a barrel of carob chips in his health food store in Sonoma, California, circa 1976. The idea of owning water. The question of post-life.

Moshfegh: I have a few heroes who have written stories that have given me brain damage.

Raymond: Kids. Emily. Ty Segall. Jogging around the reservoir at Mt. Tabor park. Dinner with the Doughtons and Malkmi. The final years of my dad's life, and my mom's awe-inspiring devotion and care to the very end.

Miller: Children and the noise, Noise, NOISE. Writing a novel while raising children is a lot like trying to defuse a bomb while someone is hitting you over the head with a Nerf baseball bat while complaining about you. Was that a full sentence? I forget the question.

Ruskovich: Living in Iowa, falling in love, moving to Wisconsin, moving back to Iowa, living there for a perfect year in a little cabin on the river, hatching ducklings, losing those ducklings to a fox and mourning them utterly, summers in Idaho with my parents, my sister's drawings, a move to Colorado, a runaway one-eyed cat, a move to another place in Colorado, dreaming up screenplays with my best friend, mourning my family hound, a teaching job in Denver, letting go of my childhood home on Hoodoo mountain, a move to rural Oregon, getting engaged, my wedding in Washington State, my husband's two novels, an elderly rabbit killed by botflies, hatching two more ducklings, watching them fly away and then fly back to me.

Moshfegh: Hypnosis, psychosis, leaving New York for California, lovelessness, boredom, celibacy, sobriety, starvation, a certainty that my future would be better than my past.

Ruskovich: I don't think there are any words I despise so far. I don't even mind the word "slow."

Miller: I don’t like it when the word “beach” is used near my stuff.

Raymond: After a reading in Seattle, I made the mistake of reading a blogger's review of my performance. He called me an "ass clown," and I've been wondering what an "ass clown" is ever since. The back cover of my story collection called the characters "pallid" and that's always bugged me, too. Mostly, though, it's the lack of certain superlatives that's been the real problem.

Miller: I already had that career. It is precisely why I’m a novelist now.

D'Agostino: I think I would have made a good chef. I like being in the kitchen; you don’t have to chitchat.

Moshfegh: Astronaut or expert on birds and flowers.

Ruskovich: I have to say that I wouldn't choose something else. Writing is what I have wanted to do since I was very young— but if the question were a little different, if I had to choose a different career, then I would choose being a pianist and composer, or a children's book illustrator, or a fourth-grade teacher, or an actor, or a singer/songwriter.

Miller: My characters and their dialogue are strong. I have the patience and discipline and capacity to re-write until I’m content but also the experience to know when to stop. The latter took at least a decade. Better at? I’d like to learn to write stories that take place over longer time periods. Intergenerational stories for example. I’m starting to read Alice Munro now to better understand how.

Moshfegh: I'm pretty good at voice and characters. I'd like to improve my spelling and vocabulary.

D'Agostino: I’ve been told I write convincing dialogue. I’ve also been told I write too much dialogue. I’d like to be better at plot. I’m amazed by a good, tight, plot . . . those ones that seem so fleshed out and perfect that it’s like they already existed and the author just took a snapshot while walking by.

Raymond: I think I'm good with plot, and with structure in general. I wish I had the brain-power to digress fascinatingly, in art and in life.

Raymond: I don't think they do.

D'Agostino: I keep my head down and keep working and try not to think about that question, but of course I think about it constantly. With all the art out there, all the books, all the lives being lived, the problems in the world, people dying, cancer and . . . just . . . why would anyone care? It takes a lot of ego to even for a split second think you matter as a writer. But of course, then I remember that the books and authors I care about have, in a lot of ways, made me the person I am. And most days I like me.

Miller: I don’t think there is hubris. I think it’s the wrong question. We novelists have earned it. We’re vetted by highly selective agents, experienced editors, educated critics and merciless readers. If we survive all that, we are the voices you should be listening to. And compared to … whom? Journalists? Politicians? Pop stars? Please. I have never met a group of people who deserve to be listened to more than my fellow novelists.

Moshfegh: Honestly, I don't give a shit... I'm an arrogant fool!