Now you scratch mine: Ford says it'll keep 700 jobs in Michigan, but wants Donald Trump to deliver on tax cuts and deregulation 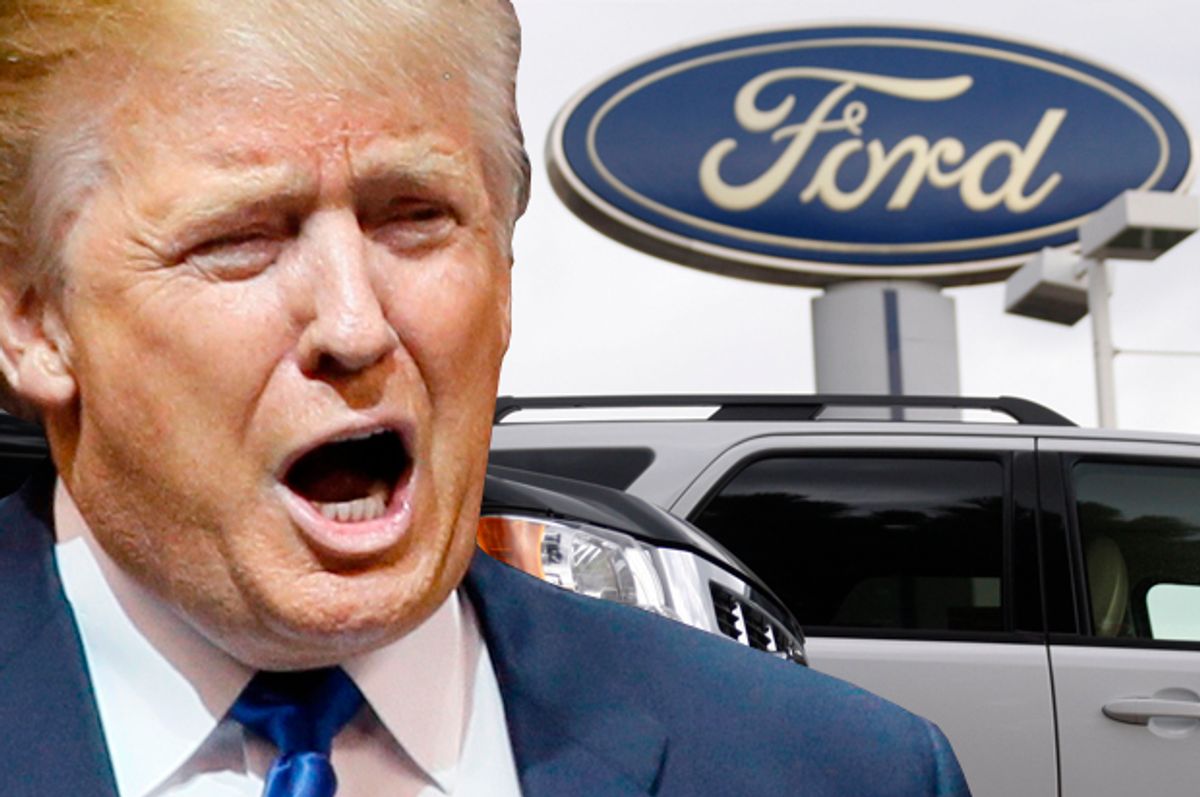 Ford Motor said it’s cancelling plans to build a $1.6 billion car factory in Mexico and instead will spend $700 million expanding an existing plant in Michigan aimed at bringing hybrid F-150 pickup trucks and a fully-electric SUV to the market by the end of the decade.

In a webcasted press conference Tuesday morning, Ford CEO Mark Fields didn’t parse words about the reason for the Michigan investment, attributing the decision directly to tax and regulatory proposals tabled by the GOP-led Congress and supported by President-elect Donald Trump.

“We believe these tax and regulatory reforms are necessary to boost U.S. competitiveness,” Fields said during the conference. Trump and his allies in Congress are proposing steep corporate tax cuts and have committed to dismantling regulations they say are unfriendly to U.S. businesses.

Though it’s unclear which regulations Fields says need to be reformed to help his company, Trump has said as many as 70 percent of federal oversight rules, including ones pertaining to air and water pollution, utilities and regulatory agencies themselves will be affected. Because cars are dangerous and involve heavy manufacturing activity, the industry is subjected to considerable governmental safety and environmental regulations, not just in the U.S. but in other advanced economies.

Stripping away regulatory oversight of vehicle manufacturing and denuding labor union power would indeed make producing cars in the U.S. cheaper, but could lead to other negative repercussions. Already the industry operates under a two-tier labor model in which some employees are paid less than others for doing the same work. And even under current regulations, automakers have been caught in recent years with major life-threatening safety-related issues, from GM’s faulty ignition switch debacle to the massive Takata airbag controversy linked to the company's efforts to cut costs.

Ford’s investment will go to expand Ford’s existing Flat Rock Assembly Plant over the next four years. The company plans to build a small fully electric SUV with a range of more than 300 miles by 2020. In the meantime it will continue to build the Ford Mustang and Lincoln Continental at the site. Ford also said it’s planning to produce and sell globally 13 new electrified vehicles over the next five years.

In a press statement, Ford said it will still send the next-generation Ford Focus to its existing plant in Hermosillo, Mexico, to improve profitability. Small cars have narrow profit margins, which has led Ford and other automakers to use Mexico’s lower labor costs to build them. Most of them are sent to other countries from Mexico rather than exported to the United States.

Trump had yet to congratulate himself on Ford’s decision, but shortly after the announcement he retweeted a Fox News report on Ford’s announcement. Trump has been pillorying Ford for much of the past year after the company announced the $1.6 billion project back in April, accusing it of shifting jobs to Mexico at the expense of American workers.

Earlier on Tuesday, Trump took a shot at Ford’s rival, General Motors, for building Chevrolet Cruze vehicles in Mexico and sending them to the U.S. GM fired back hours later saying most Cruze cars for the U.S. market are built at its Lordstown, Ohio, assembly plant. A GM spokesman told Salon that all of its 190,000 Chevrolet Cruze cars sold in the U.S. were made in the U.S. Only 4,500 Cruze hatchbacks were imported from its plant in northern Mexico, because most Cruze hatchbacks are sold outside of the United States and it doesn’t make sense to set up U.S.-based assembly for a small number of the cars it sells on the domestic market.