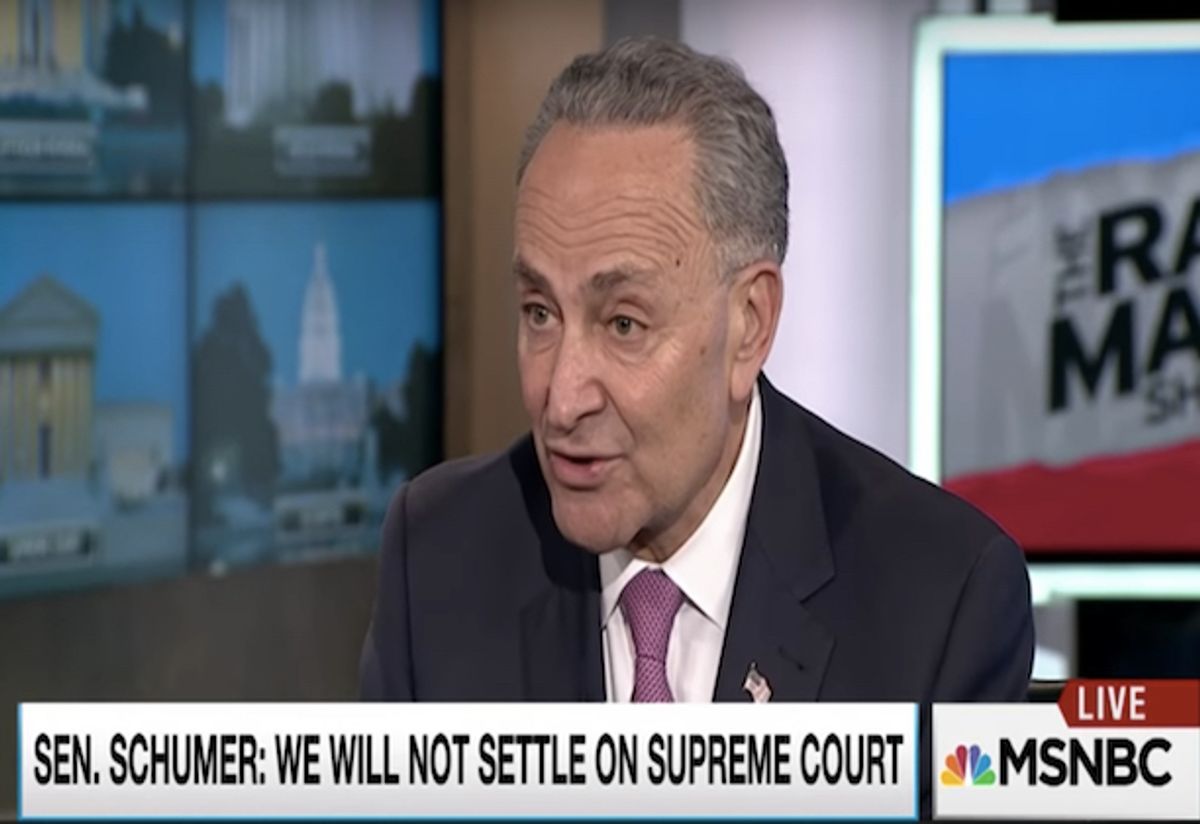 Freshly sworn-in Senate Minority Leader Chuck Schumer vowed on Tuesday to vehemently oppose President-elect Donald Trump’s first U.S. Supreme Court pick — balking at the idea that under his leadership, Democrats in Congress will be unable to serve as an effective opposition to the Republican agenda.

The New York Democrat has come under increased criticism for his perceived closeness with the president-elect. Schumer commented shortly following Trump's surprise win in November that he is willing to work with the New York businessman on issues such as infrastructure spending. Senate Democrats, meanwhile, have already vowed to stall action on eight of Trump's Cabinet nominees, CNN reported, so now Schumer has added the coveted Supreme Court seat left vacant by the late justice Antonin Scalia to the list of positions which Democrats plan to play hardball with the Trump and the GOP over.

“We are not going to settle on a Supreme Court nominee," Schumer said Tuesday in an interview with MSNBC's Rachel Maddow.

Schumer argued that since Senate Republicans broke precedent by refusing to confirm President Obama's Supreme Court nominee, Judge Merrick Garland, Democrats are planning their own form of payback. The Senate’s new top Democrat told Maddow that blocking Trump’s nominee pick is about giving the Republican-controlled Senate, which refused to even grant Garland any hearings for a year, a taste of its own medicine.

"If they don’t appoint someone who’s really good, we’re gonna oppose him tooth and nail,” Schummer declared. “It’s hard for me to imagine a nominee that Donald Trump would choose that would get Republican support that we could support,” he added.

“And so you will do your best to hold the seat open?” asked Maddow.

“Now then, they won’t have 60 votes to put in an out-of-the-mainstream nominee, and then they’ll have to make a choice: Change the rules,” he continued.

A supermajority is currently needed to confirm a Supreme Court nominee. Although Republicans control the House, the Senate and the presidency, with only 52 Republicans in the Senate, they do not have the 60 votes needed to break a Democratic filibuster without the help of eight Democrats.

Republicans, however, could simply eliminate the ability for senators to filibuster that vote, by deploying the so-called “nuclear option” and allowing the vote to pass by a simple majority. Earlier this week, Schumer expressed regret for his role in opening the floodgates to this level of one-party control without a mechanism for opposition.

"Wish it hadn't happened," Schumer said to CNN's Dana Bash of Senate Democrats' 2013 decision to trigger the so-called "nuclear option" — over the objections of Republicans — to lower the threshold to overcome certain filibusters from 60 to 51 votes.

"I argued against it at the time," he clarified. "I said both for Supreme Court and in Cabinet should be 60 because on such important positions there should be some degree of bipartisanship . . . I won on Supreme Court, lost on Cabinet. But it's what we have to live with now."

Schumer argued to Maddow, however, that he believes it would be “very hard” for Republicans to eliminate the filibuster for Supreme Court nominees given that some GOP senators do not want to alter the chamber’s rules.

“We are not going to make it easy for them to pick a Supreme Court justice,” he told MSNBC. "The consequences are gonna be down the road.”

While Republicans' faced little to no negative consequences for holding the Supreme Court seat vacant for a year, theirs was not an indefinite block, as Schumer is suggesting Democrats are prepared to do. It is hard to imagine Senate Republicans will allow the ninth seat to remain open for four years, although some were actually arguing for just that ahead of the election when it looked as if Hillary Clinton would defeat Trump.

"If Hillary becomes president, I’m going to do everything I can do to make sure that four years from now, we’re still going to have an opening on the Supreme Court,” North Carolina Republican Richard Burr said in November. Arizona Sen. John McCain pledged while campaigning for re-election, "I promise you that we will be united against any Supreme Court nominee that Hillary Clinton, if she were president, would put up. I promise you.”

Schumer's play is likley meant to pressure Trump into selecting a moderate. While Democrats may not have the best track record playing hardball against their Republican colleagues, despite the fact that several vulnerable Democratic senators up for re-election in red states in 2018, Schumer's tone is also an indication that he is aware of voters' sentiment on Democrats working to help Trump.

A new poll of voters in 14 states that Trump won which have a Democratic senator showed that a majority of voters felt that the senator up for re-election in 2018 should be a "check and balance" on Trump.

Schumer's decidedly defiant tone echoed his earlier pledge that if Trump's Supreme Court nominee is "out of the mainstream, yes, we're going to fight that nominee tooth and nail."

Watch his interview with Maddow below, via MSNBC: