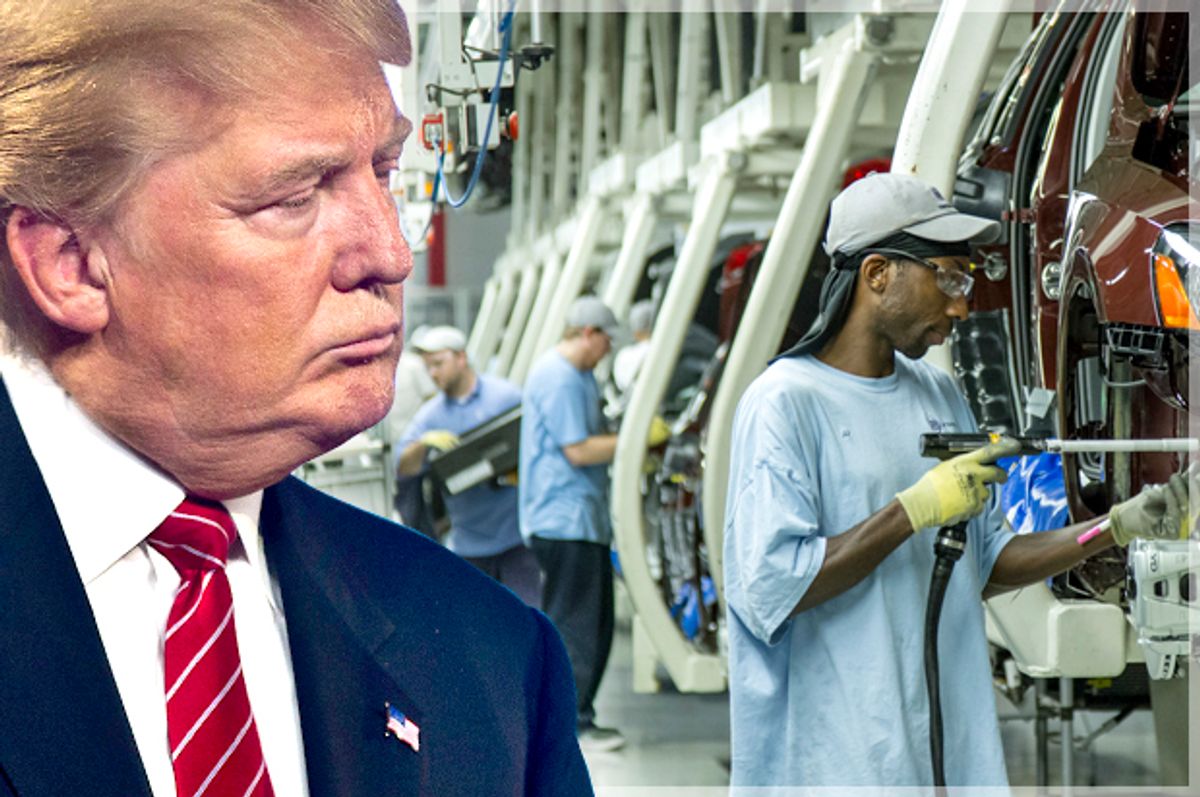 Donald Trump’s plan to save American jobs by cutting deals with individual companies on a case-by-case basis continues yielding dividends. That is, if we measure dividends mostly in terms of good press for Trump.

The president-elect already earned praise in December for strong-arming Carrier, an air-conditioner manufacturer in Indiana, into an agreement not to close its Indianapolis plant, thereby sparing an announced 800 or so jobs. This number was revised downward when more details of the deal came to light a few days later, but by then Trump had already reaped the benefits of a good news cycle or two.

Then came Tuesday’s announcement by the Ford Motor Company that it has cancelled construction of a plant in Mexico and will instead invest in an expansion of its Flat Rock Assembly Plant near Detroit. This move, which Ford’s chairman publicly attributed to Trump even as NBC’s sources within the company and independent analysis showed the Mango Menace had nothing to do with it, will add 700 jobs in Detroit.

If this pattern continues at the same rate, in a year Donald Trump will claim credit for saving or adding somewhere in the neighborhood of 9,000 manufacturing jobs in the Rust Belt. Assuming none of them are turned over to robots instead of the Mexican laborers they were originally ticketed for.

Nonetheless, media outlets were quick to give Trump the ego-stroking headlines that are for him what oxygen is for other mammals on Earth. Reuters and the New York Times, for example, both implied that Trump’s criticisms, which he leveled at Ford throughout the presidential campaign, had led to the company’s decision. The Los Angeles Times headline quoted Ford’s CEO as calling the move “a vote of confidence for Trump.”

Of course if one reads the statement made by Ford CEO Mark Fields more closely, one sees that to the extent Trump’s rhetoric had anything to do with the decision, it was as much his promises of “tax and regulatory reform” as his criticisms of Ford for exporting manufacturing jobs to other nations. You know how the United States has these onerous environmental and worker protection regulations that make a country like Mexico, which lacks them, so much more attractive to a company like Ford? Well, good news! President Trump is going to roll those regulations back.

So this is to be Trump’s policy: Public shaming coupled with behind-the-scenes promises to sacrifice the environment and the people in exchange for a few hundred manufacturing jobs here and there and some statements praising the president for his foresight and business-friendly attitude. The resulting good press distracts everyone from noticing that in the grand scheme of an economy with around 145 million jobs, a few hundred here and there is barely a statistical anomaly.

More frustrating than the con Trump is perpetrating -- and the obvious fact that this is no way to create long-term economic policy that will address the challenges facing the nation’s workers -- is the reaction, or lack thereof, of conservatives who allegedly believe in the free market but will stand by while it is perverted by a strongman’s desire for ego gratification.

Perhaps congressional Republicans were distracted by the blow-up over their ill-fated attempt to do away with their own ethics overseers, but leading GOP figures were notably quiet about Trump and Ford on Tuesday. That silence was in sharp contrast to eight years ago, when the auto industry was in grave danger of collapsing, and both George W. Bush and Barack Obama stepped in to save it.

Obama gets most of the credit for the auto bailout, though it began under the Bush administration. Then, the Big Three car companies – General Motors, Ford and Chrysler – were all facing collapse. They were bleeding billions of dollars thanks to poor sales and business practices. Because of the Great Recession, banks were not lending money, so the companies could not borrow to keep themselves afloat. So the federal government took over the job, lending the auto manufacturers money and steering all three either into restructuring or -- in the case of Chrysler -- sale to a foreign auto company, Fiat.

For its trouble, the Obama administration was besieged by the Republicans and the right. It was accused of using the bailout as cover for bringing socialism to the United States, with the implication that soon every industry would be crushed under the boot heels of central planners and bureaucrats. This was laughable nonsense, but that did not stop it from becoming gospel on the right, where it set the stage for fear-mongering that every Obama initiative – especially the Affordable Care Act, of course – was another step in turning the United States into a dystopian socialist hellscape.

Whatever one thinks of the merits of the auto bailout, there is no doubt about its effects. A 2013 study showed that the bailout saved 1.5 million American jobs, not just in the car companies themselves but up and down their supply chains in multiple states. Had all three companies gone under, the resulting unemployment would have been catastrophic. Areas of the Rust Belt that were already struggling might have disappeared forever.

Instead the auto industry, given time and space, recovered and thrived. In the long run, the extraordinary intervention of the government will had tangible benefits for autoworkers and associated businesses.

Trump’s method of shaming by tweet, on the other hand, does nothing to address the long-term stability of American manufacturing. His promised “reforms” will involve increasing profits at the expense of worker and environmental protections. His shakedowns of one company at a time, not unlike the operation of an outer-borough loan shark, is a cheap and lazy approach to solving problems. That Republicans are seemingly satisfied with it tells you everything you need to know about their fake concern for American industries and American workers.