No, Putin didn't hack the power grid; journalists need to take a breath and get it right 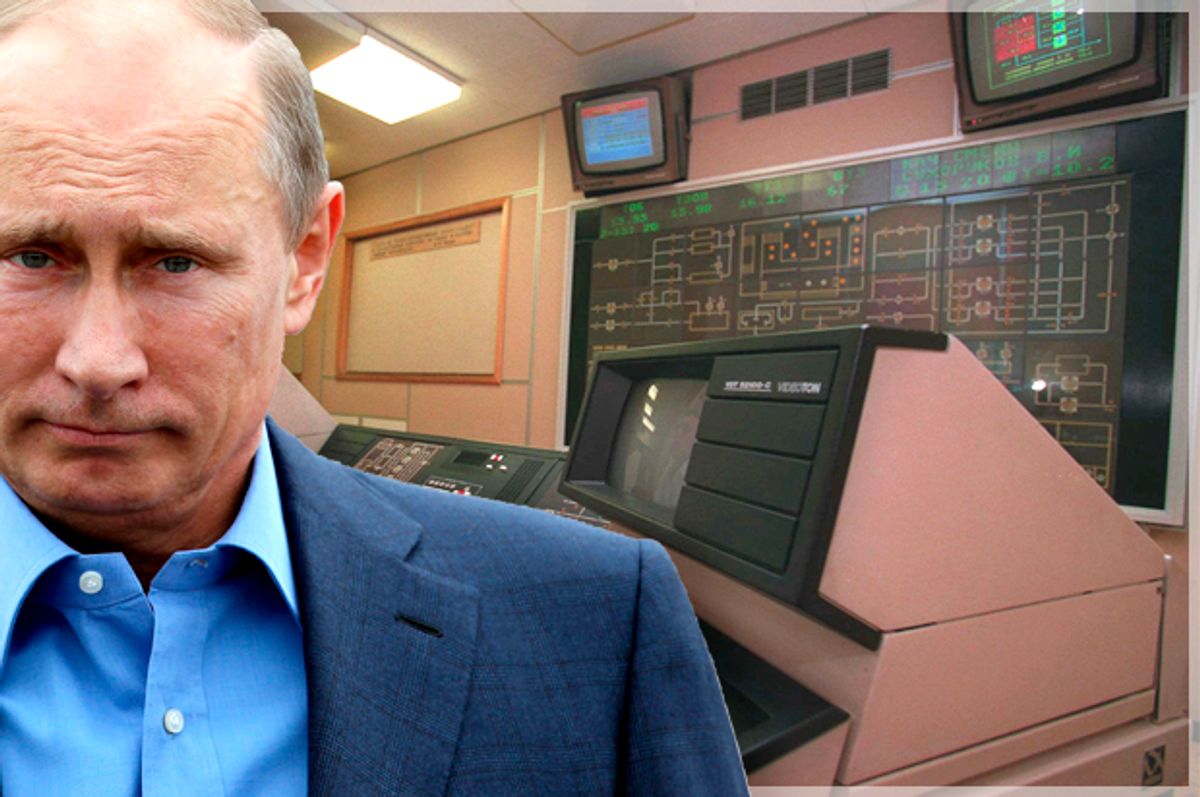 Under the constant pressure of deadlines while facing a multiplicity of widely differing subjects, journalists often don’t have the time or ability to deeply understand the things they write about. That’s particularly true about arcane areas like foreign affairs, technology and science.

Unfortunately for the public, the story of what really happened with the Russian Federation and the 2016 presidential election is centered on these areas about which most mainstream journalists know little. That ignorance is fast becoming dangerous to the American public as false stories have begun spreading like wildfire.

On New Year’s Eve, the Washington Post set off an erroneous news conflagration as it claimed that Russian "black hats" had successfully breached America’s electrical grid, the internal network that enables many power companies to transmit electricity to each other and to their customers.

“Russian hackers penetrated U.S. electricity grid through a utility in Vermont, officials say,” read the headline on the Post’s report.

The story caught fire across news outlets. According to Google News, there were nearly 400,000 results for the query “russia vermont power.” Google Trends, the search giant’s tool for measuring public interest in any search term, showed a hundredfold increase in requests for “russia vermont” over the past few days. Instead of wondering which celebrities would have  drunken meltdowns on New Year's Eve — Don Lemon and Mariah Carey did not disappoint — many Americans ended up wondering if Vladimir Putin was going to cut off the power to their homes.

Those worries were completely baseless, however. The Post had been misled by government officials. As it turned out, a laptop computer belonging to Burlington Electric had been infected with some malware that apparently originated in Russia several years earlier.

The infected computer, moreover, was not connected to the power company’s electrical system. Apparently the Post ran its story before obtaining confirmation from Burlington Electric about whether or not that was true.

The spyware that was on the power company laptop, called Neutrino, is common and has existed for years, and is used by hackers across the globe. As the Post was forced to report Tuesday, the IP address with which the infected computer had been communicating is not necessarily one involved in nefarious activity.

In other words, the Post's entire story about Russian hacking into America's electrical grid ended being unprovable at best and completely false at worst.

The episode is amusing in a sense, but is also destructive to American-Russian relations and to the credibility of the news media, which was already at record-low levels. In a September Gallup poll, just 32 percent of the public said they had a “fair” or “great deal” of trust in the mainstream media.

Despite their skepticism about the media in general, however, many members of the public continue to believe false theories about the recent hacks of the Democratic National Committee. According to a survey conducted by the Economist and YouGov, 52 percent of self-identified Democrats believe that Russian hackers altered election results to help Donald Trump defeat Hillary Clinton. No government officials or prominent Democrats, Clinton included, have made such an allegation. President Obama and other officials have explicitly denied it.

Some of that confusion is caused by journalists who have unintentionally elided the important distinction between the allegation that Russia hacked the Democratic Party's computer systems and the far-fetched conspiracy theory that Russians altered the vote totals. The AFP wire service provided a terrible example of this when it ran a story about sanctions that President Obama announced on Dec. 29. According to AFP, the sanctions were in retaliation for “vote hacking.” (The news organization subsequently corrected its headline.)

Even legitimate stories have been botched by both journalists and government officials. As I wrote last week, the October report that the Obama administration released to the public last Thursday about the allegations contained essentially no evidence supportint the allegations that Russia was involved in hacking Democratic computer systems. That isn’t to say that there is no evidence – there is some, actually — but the public analysis provided by the Feds thus far has been insufficient. Unfortunately, many journalists and politicians lacking in technical knowledge (especially of the center-left variety) have misinterpreted the report as being conclusive.

These governmental and journalistic failures have fueled widespread public confusion about this  topic. Given their distrust of the media and partisan inclinations, many Republican voters seem to want to ignore the topic all together. There is one subset of Republicans that is obsessed with the hacking allegations, however: the same hawkish neoconservatives who caused the fiasco of Iraq War. This group, led by Sens. Lindsey Graham and John McCain, is using its public positions to foment hysteria, just as it did in 2002. And the nation's left-leaning journalists are enabling them just as they did before.

Besides taking the time to get the facts, the media also need to provide more perspective about the fact that cyber-espionage is not an isolated or rare event. In today’s always-on internet world, governments are constantly trying to hack each other. In 2013, it was revealed that at least five different nations — the U.S., the U.K., China, North Korea and Russia -- had figured out how to eavesdrop on German chancellor Angela Merkel’s smartphone. Former CIA contractor Edward Snowden revealed several intensive NSA operations to spy on various countries, particularly China. Likewise, China and other countries have been actively trying to hack into American computer systems.

Furthermore, the United States is not necessarily entitled to play the role of innocent victim especially since, in November, the Independent newspaper in Britain claimed the U.S. had hacked into Russia's power grid and was threatening to sabotage it if the Russians interfered with the presidential election.

Public officials and the media owe it to the public to take the time to get these complicated issues right and avoid promoting false information. Everyone agrees that “fake news” websites spreading outright fabrications don’t serve the public. But false or misleading stories promulgated by otherwise legitimate news sources could be even more dangerous.