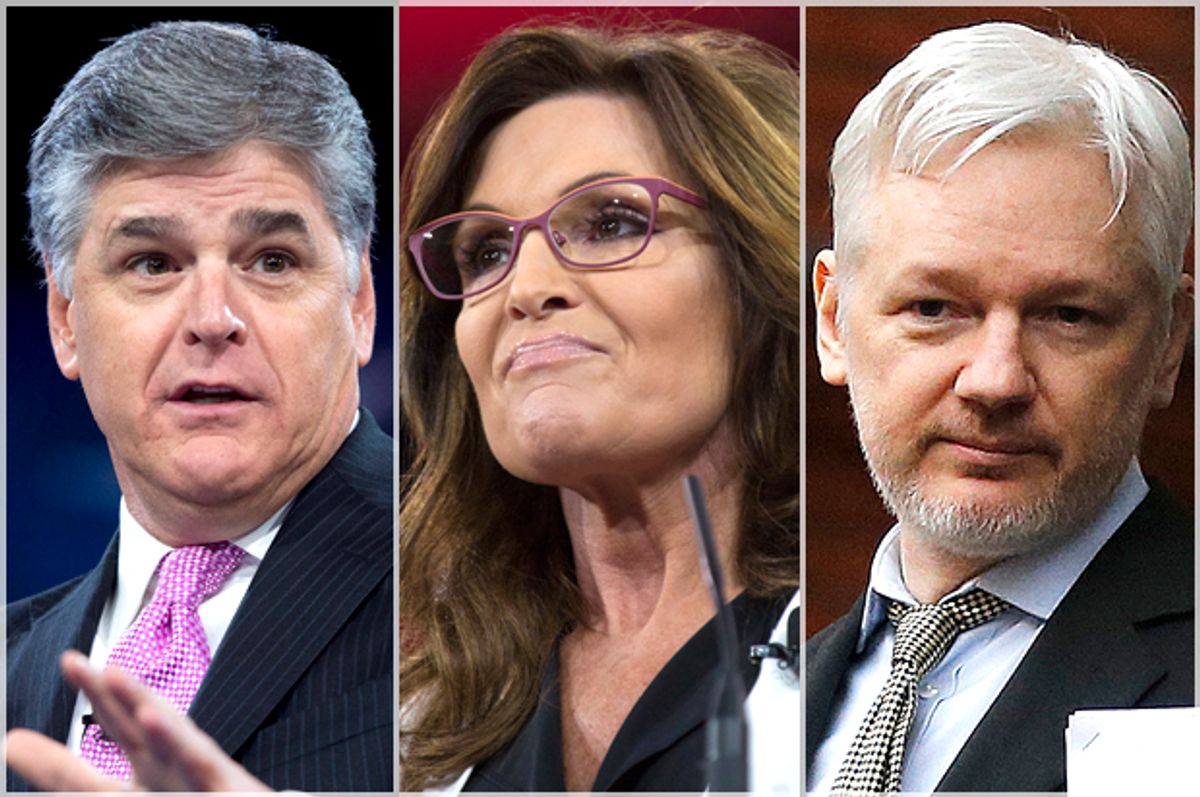 It seems that hatred of Hillary Clinton can unite conservative Republicans such as Sean Hannity and Sarah Palin with WikiLeaks founder Julian Assange, the man whose website posted thousands of Clinton emails in the months leading up to the November elections.

When discussing the Joint Analysis Report that claimed to prove Russia was responsible for the hacking, Assange said that "on the top, there is a disclaimer saying nothing — there is no guarantee that any of this information is accurate." When Hannity led Assange with the comment that "it's a guess," Assange shook his head and said, "I used to be a computer security expert. What they have is what they call indicators. So, a way to recognize if these tools, these alleged Russian tools, have been used on your system."

Assange also complained that the allegations he had received the hacked Democratic National Committee emails from the Russians was a Democratic attempt "to delegitimize" Donald Trump's victory, even though many Republicans with access to confidential intelligence documents — including Sens. John McCain and Lindsey Graham — have also adamantly insisted that Russia was responsible, even criticizing the Obama administration for not being tough enough against them.

Assange and Hannity both denounced the "very dishonest" and allegedly liberal-biased "mainstream media" for writing about reports of Russian involvement in the hacking. He also insisted, with Hannity's prodding, that his source was "not the Russian government and not a state party," which astute observer might note was a hedged response that did not account for the possibility that he received it from a source connected to the Putin regime.

Hannity also gave Assange time to wax poetic about the plight he has suffered since being forced to seek political asylum at the Ecuadorian Embassy in London since 2012.

"I have been detained illegally, without charge for six years, without sunlight, lots of spies everywhere. It's tough," Assange said, before adding "but that's the mission I set myself on. I understand the kind of game that's being played - big powerful actors will try and take revenge...it's a different thing for my family - I have young children, under 10 years old, they didn't sign up for that... and I think that is fundamentally unjust... my family is innocent, they didn't sign up for that fight."

Hannity isn't the only conservative Republican who weeps for the Russian-connected whistleblower. Sarah Palin is now apologizing to him.

Sarah Palin is just one of many Republicans who are falling behind Donald Trump in his war against intelligence.

Paul Ryan to @hughhewitt on Julian Assange: "I think the guy is a sycophant for Russia." pic.twitter.com/pUN1QwXc35

Sites like Ars Technica have discussed the weaknesses in the Joint Analysis Report that claimed to prove Russia's involvement in the hacks, which one of the experts it interviewed attributed to "report reviews, leadership approval processes, and sanitation processes stripped out most of the value and left behind a very confusing report trying to cover too much while saying too little."