Everyone who has health insurance has benefited from the ACA — and we'll all suffer from repeal. Time to fight! 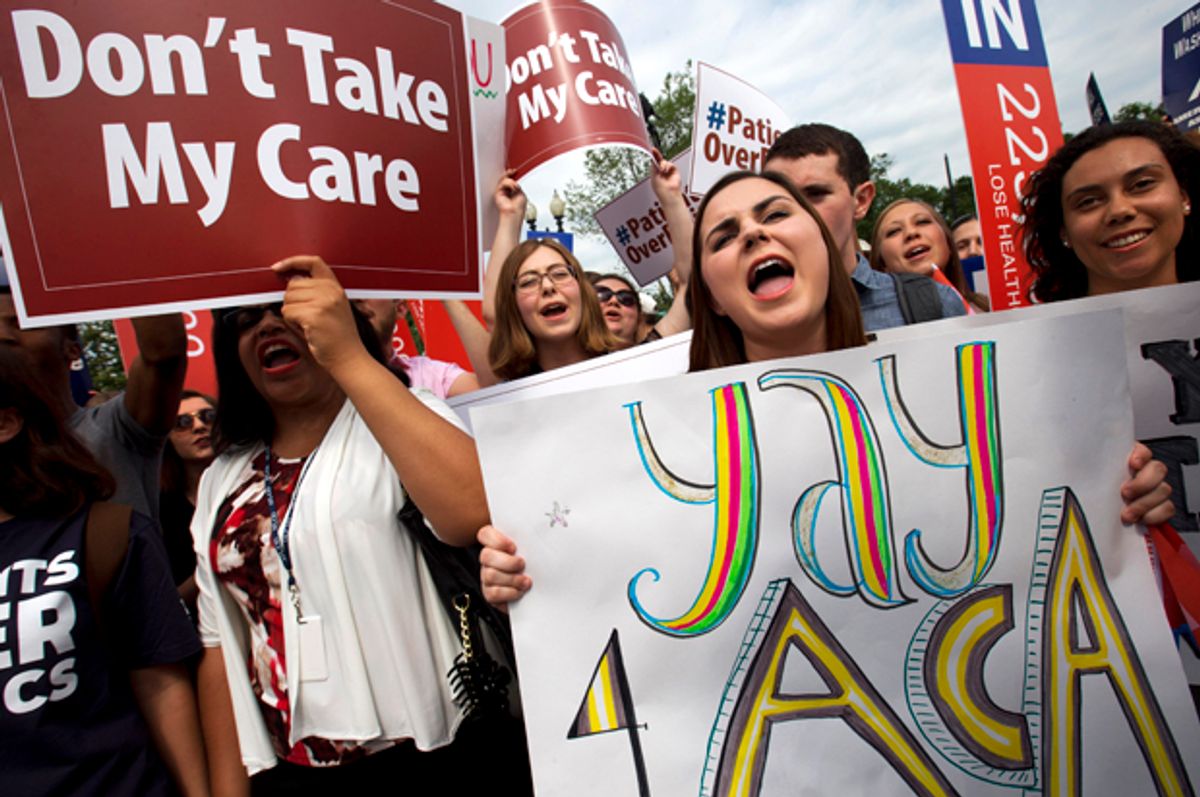 On Wednesday, Donald Trump tweeted this: “Republicans must be careful in that the Dems own the failed ObamaCare disaster, with its poor coverage and massive premium increases.......like the 116% hike in Arizona. Also, deductibles are so high that it is practically useless. Don't let the Schumer clowns out of this web...massive increases of ObamaCare will take place this year and Dems are to blame for the mess. It will fall of its own weight - be careful!”

Everything the president-elect wrote here was wrong, beginning with his grammatically awkward “failed Obamacare disaster.” A failed disaster? We’ll dig into the details presently, but in brief: Coverage is vastly improved; premium increases are less steep than they were before the law; and deductibles have been capped by the Affordable Care Act at rates lower than before the ACA existed. Furthermore, whenever Trump talks about the ACA, it becomes increasingly clear that he knows nothing about the law. Nothing. His tweets aside, during his "60 Minutes" interview Trump said something about insurance for kids who still live at home. OK, in that case we actually know what he meant, but there’s nothing in the law about kids who live at home.

Before we launch into the details, let’s zero in on the latest Trump/Republican hooey about the law -- that just because rates have spiked in parts of the country, we should summarily repeal the entire thing.

This is sort of like banning gas stations when gasoline prices spike.

By repealing the ACA, President Trump and House Speaker Paul Ryan will toss millions of us back into the pre-ACA hellscape of bankruptcy and premature death. Why? Because rates went up in Phoenix? Incidentally, according to the Kaiser Foundation, rates in Phoenix went up by 145 percent, not 116 percent, like Trump said. So, the rate hike is greater than Trump reported. However, this is cherrypicking. The lowest-cost Silver plan in Phoenix went up by 145 percent, but the premiums for the second-lowest Silver plan will remain the same for 2017 -- a zero percent increase, according to Kaiser. Likewise, premium subsidies jumped from zero to $300 per month, effectively helping struggling families in Phoenix to pay for insurance.

Healthcare insurance premiums were always going to climb, with or without the ACA. With it, the rate of increase has actually been much lower. smaller than before the ACA existed. Yes, dramatic rate increases of 145 percent or more happened all the time and, worse, the pre-ACA insurance coverage accompanying those spikes was shoddy and limited. We’ll detail how shoddy in a minute.

Clearly, though, half the nation has been snowed by Republican propaganda, believing the ACA is a mess worthy of being euthanized when in fact it merely needs amending. That has always been the point -- to build upon the law and improve it. The problem all along has been that the anti-ACA forces, led now by Trump and Ryan, have been far more effective at inaccurately smearing and demagoguing the ACA than the pro-ACA forces have been at educating the public and promoting the benefits of the law.

Even though I’ve been a supporter of President Obama, he and the Democrats have done a lackluster if not horrible job of educating the public about both health insurance in general (which is deeply complicated) and how the ACA improves it. Maybe it’s just me, but whenever I hear an Obama administration official or a congressional Democrat discussing the law, it feels like they’re soft-pedaling it.

Nevertheless, we already know that according to the Commonwealth Fund, upwards of 87 percent of ACA purchasers are satisfied with their coverage. That includes a 74 percent satisfaction rate among Republicans. (Yes, millions of Republicans have insurance purchased through the ACA -- policies that will evaporate when Trump repeals the law.) That said, what’s missing from the various pitches for the law is how it improves insurance for people who have employer-based insurance not purchased via the ACA marketplaces. Let’s do the list.

Here are some of the benefits of Obamacare you’re enjoying right now, even if you don’t have insurance purchased through an ACA marketplace. All told, the insurance you own is considerably better due to the existence of the ACA.

No more rescission. It used to be that some insurance customers could be stripped of their insurance when they became seriously ill or injured. Not any more. The ACA bans this practice, known as “rescission.” According to a congressional report, 20,000 patients were booted from their policies over a five-year period, pre-ACA. Another study showed 27,000. When Trump repeals the law, insurers will be allowed to go back to the old days of stripping patients of their coverage as soon as they’re diagnosed with cancer or a catastrophic injury. Yes, this will include Trump voters, who will get screwed along with the rest of us.

Closing the Medicare "doughnut hole." Before the ACA, retirees who require prescription drug coverage through George W. Bush’s Medicare Part-D program had to go without coverage for a period of weeks if not more. This meant either paying for medicine out of pocket or going without. If you’re dependent on prescription medication in order to, you know, survive, losing your coverage isn’t good. The ACA is gradually closing and eliminating this gap. When Trump repeals the ACA, the gap will open up again. Again, this will include Trump voters.

No more annual or lifetime limits. Some Trumpers and Republicans might not know this, but before the ACA, insurance companies could cap your coverage at a certain dollar amount, forcing you to lose coverage once the limit was reached. That's not good if you’re in the middle of long-term treatment for a serious illness such as cancer. Once the limit was reached, you were screwed. When Trump signs a full repeal of the ACA, annual and lifetime limits will return.

Free preventive care. Americans with non-ACA, employer-based coverage don’t have to pay for preventive care anymore, thanks to the ACA. A study by the Department of Health and Human Services showed that “71 million Americans in private insurance plans received expanded coverage of preventive services, such as mammograms and other cancer screenings, flu shots, and cholesterol checks, at no additional charge in 2011 and 2012.” It’s once again important to note that this didn’t exist with pre-ACA insurance plans.

Insurers have to spend more on care, not advertising. With the ACA, insurance companies are now required to spend at least 80 cents on the dollar providing medical care. Prior to the law, insurers could blow through your premiums, spending more on advertising and CEO salaries than on actual care. When Trump repeals the law, insurers will go back to wasting your money.

The kids! Think about the kids! Even though Trump said on "60 Minutes" that he plans to keep the part of the law regarding children who remain on their parents’ healthcare plan until age 26, it doesn’t look like Ryan and the congressional GOP are planning to leave this part of the law alone. Indeed, they’re planning for a complete repeal, with a replacement forthcoming … whenever. So, if your 24 year-old daughter is on your plan, regardless of whether she has multiple sclerosis or kidney disease or ovarian cysts, she won’t be covered after Trump signs the repeal.

Black lung benefits. Coal miners voted for Trump in overwhelming numbers, but they will lose the black lung disability benefits contained in the ACA. Again, these are Trump voters, and they’ll be utterly screwed when Trump repeals the law.

To repeat: These are benefits enjoyed by ACA enrollees and non-ACA enrollees alike. If you don’t want these protections anymore, by all means tell your member of Congress that you’d prefer shoddy, wasteful coverage that won’t be there when you actually need it. You’d rather roll the dice with your health just because you hate Barack Obama. Tell them.

One last thing. On Tuesday, the Senate Republicans passed the first budget resolution of the 115th Congress, with all Republicans, minus Sen. Rand Paul of Kentucky, voting in favor. The resolution calls for a second piece of legislation, to be proposed by Jan. 27, to defund the ACA. That means everything budgetary about the law, including the subsidies, the Medicare doughnut-hole closure and so forth will vanish. Perhaps I’m burying the lede by noting that the GOP resolution also calls for a budget deficit of $1 trillion over the next 10 years, and a whopping -- get this -- $29.1 trillion national debt by 2026, adding $10 trillion to today’s debt. (Debbie Downer fail horn.) Those numbers are written into the law, beginning on page five. Yes, the party that’s been fully ensconced in freakout mode about the national debt is actually on record adding trillions to it. (Hat tip to Lawrence O’Donnell.)

So if you're thinking that your insurance was better before the ACA, it wasn’t. And you’re about to be reminded how horrendous it was just eight short years ago, before the law was passed. Congressional Democrats, meanwhile, have to educate the anti-ACA public about how badly they’ll be impacted by the repeal of the law. They have to. Starting now.

Chuck Schumer, the newly minted Democratic leader of the Senate, told Rachel Maddow on Tuesday that he plans to talk about the “chaos” that will ensue if the law is repealed. It has to be more than that. Democrats must do a much better job of explaining to Americans exactly what they stand to lose when Trump upends the entire healthcare industry with this reckless stunt.