Trump loves to play the reality-TV host promising next week's big reveal, but he never has the goods 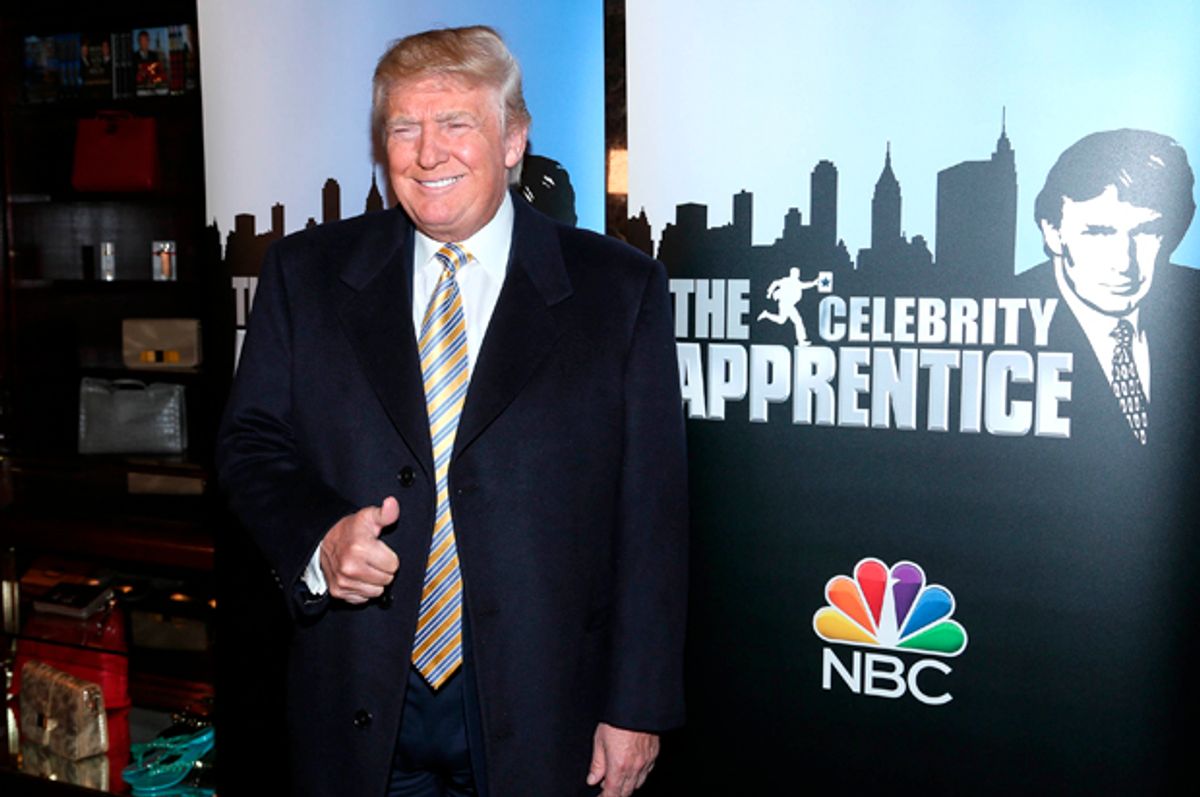 This week Donald Trump is using his well-honed skills as a reality-TV show host and producer to once again bamboozle the press, bending the coverage away from holding him accountable and toward covering his incoming administration like it's "The Apprentice: White House Edition."

After weeks of coverage about the intelligence community's conclusion that Russian spies stole Democratic National Committee emails to help Trump's campaign, Trump hijacked the news coverage with a showy, reality TV-style promise: This story will end with a big reveal, but you have to tune in next week to find out what it is.

"It could be somebody else. And I also know things that other people don't know, and so they cannot be sure of the situation," Trump told reporters at a New Year's Eve party at his Mar-a-Lago estate. "You'll find out on Tuesday or Wednesday."

Oooh, what could it be? It's all very exciting, like that time we didn't know whether a "Bachelor" player was going to choose the hot blonde or the hot brunette and we just had to debate and speculate and exhaust ourselves with wondering until the big season finale finally came around. Which, as you'll already know if you have ever watched reality TV, will inevitably be a huge letdown that you'll promptly forget about in the morning.

I would recommend not putting off important plans in anticipation of the Big Russia Reveal. Trump has a habit of claiming that he has really important information and that the press will simply have to wait on tenterhooks for the big unveiling, but he never bothers to cough it up.

Just like any other reality-TV producer, he's not particularly worried about not having the goods. Getting everyone chattering around the water cooler is the only thing that matters.

“Trump was an executive producer of ‘The Apprentice.’ He wasn’t just the host," Jennifer Pozner, the author of "Reality Bites Back: The Troubling Truth About Guilty Pleasure TV," explained over the phone. “Trump conceptualized the show and was a 50-50 partner with Mark Burnett.”

"The Apprentice" first aired in 2004, and over the course of 14 seasons, Trump learned a lot about distorting reality to create tantalizing narratives that the public will eagerly gulp down, without any regard to whether that "reality" is actually, you know, real.

“Mark Burnett taught apprentice Donald Trump to be an absolute master storyteller, an absolute master crafter of narrative, who can spin falsehoods and failures and bullshit into a vision of moral authority and professional success," Pozner argued.

Pozner pointed out that Trump's public search for secretary of state fit the pattern of a reality-TV show like "The Apprentice" or "The Bachelor," in which contestants are put through a bunch of humiliating trials.

Trump's taking out Mitt Romney for a candlelight dinner to build anticipation — and then making a spectacle of not choosing him — was a tactic straight out of "The Bachelor."

“In the end, he doesn’t get the rose and has to go home humiliated," Pozner said of Romney.

Claiming to have exciting information and then deliberately withholding it to build suspense is a classic reality-show trick, often used to get people excited about episodes that end up revealing nothing particularly interesting or dramatic. Clever editing of promos to show horrified gasps underscored with dramatic music can make an audience think next week's episode is going to be something shocking, but far more often it turns out to be some boring nonevent.

Trump uses the exact same trick to manipulate the media. In September Trump heavily marketed a upcoming reveal of his health records on Dr. Oz's TV show, but in the end, in classic reality TV style, the event didn't live up to the hype. He didn't turn over the records, just a letter from his doctor.

That same month, Trump hyped a press conference that would supposedly be the big reveal of his stance on President Barack Obama's birth certificate, but instead was a lengthy infomercial about his new hotel. He failed to engage in any reflection on his long history of pushing anti-Obama conspiracy theories.

Trump did the same thing with his tax returns, except he didn't even bother with the big letdown. He just kept promising the big reveal and let the story run out of steam, never actually bothering even with a fake release of the tax returns.

And Trump is continuing to use this reality-show hype strategy as president-elect. In response to questions about his business contacts, Trump hyped a Dec. 15 press conference, in which he would supposedly release an exciting and oh-so-dramatic plan to divest himself of his conflicts of interest. The strategy generated a huge amount media coverage and speculation about what this exciting twist would be.

Trump quite likely possibly learned this trick from "The Apprentice." The whole show is built around a promise that the winner will receive an exciting new business career, but winners almost never end up with the prestigious kinds of corporate jobs they were promised. Or he learned it from "The Bachelor," which advertises itself as a show about marriage and romance but almost never produces a couple that makes it all the way to the altar.

Which is why I feel confident that Trump's secret Russian info, like the marriages of "The Bachelor" or jobs on "The Apprentice," is just an illusion, created to hijack the narrative. Trump's behavior on Tuesday seemed to confirm this. Instead of revealing the supposed inside information or turning it over to the CIA, Trump stalled, whining on Twitter that intelligence officials had postponed a briefing until Friday. (White House officials denied this claim, saying that there had never been a Tuesday meeting scheduled.) He also tweeted this:

If, as Trump says, he has secret information that will clear this up, why speculate at all? Why not just reveal the information? The answer is that he doesn't have it. He's using reality-TV tactics to create hype and never had any intention of delivering on it.

The sad part is that this strategy will work, just like it did during the presidential campaign. Journalists will become all hyped up about the big reveal, waiting for him instead of doing their own digging and actually covering the news. Trump just has to bide his time until all the steam has run out of the story and everyone has moved on to something else.

It's long past the time for the press to stop letting Trump play this reality-TV game to hijack the news cycle. His exciting promises of future information should be treated as lies until proved otherwise.