Muslims stood with us after Paris and Orlando: Where’s our support for the victims in Istanbul?

The mass shooting in Istanbul was the fourth terror attack in under a month. America's response is underwhelming 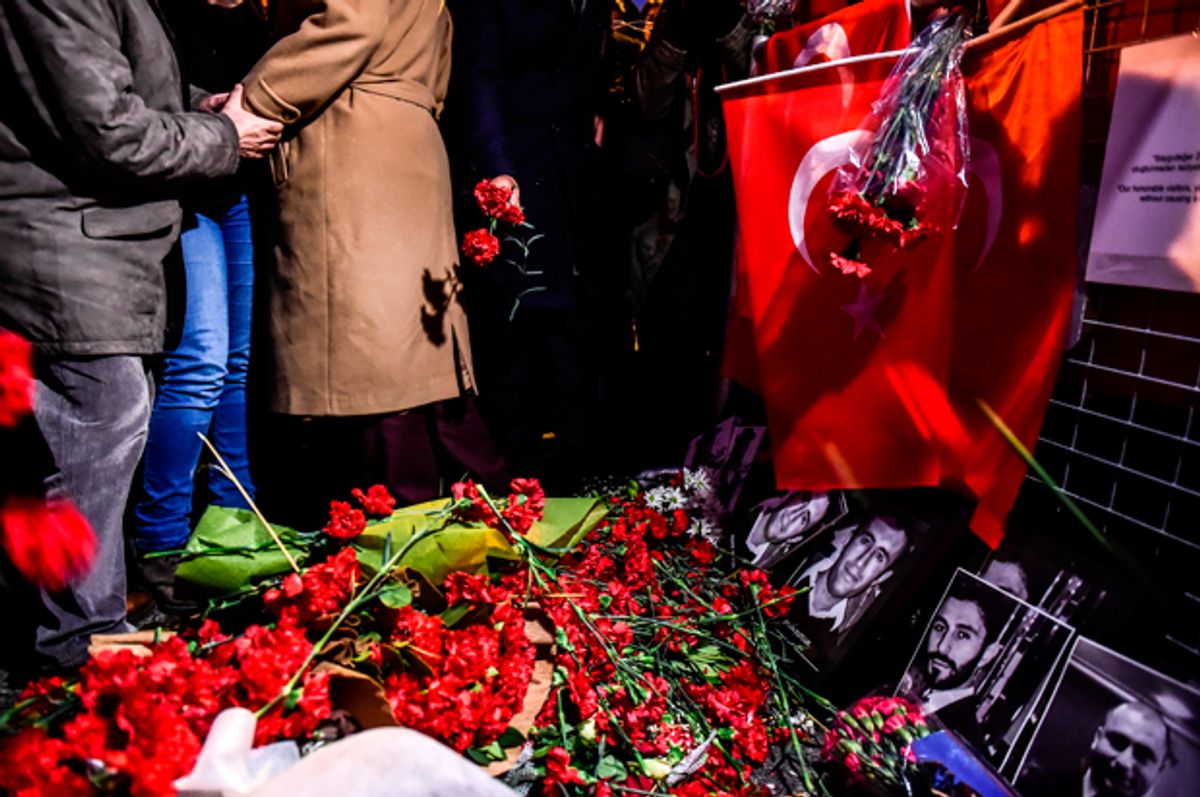 People lay flowers in front of the Reina nightclub on January 3, 2017 in Istanbul (Getty/Yasin Akgul)
--

It’s the tragedy the world forgot.

During the early hours of New Year’s Day, a lone gunman opened fire on Reina, a nightclub in Istanbul, a terror attack with eerie parallels to recent shootings in Paris and Orlando. At least 39 people were killed and 70 more were injured in the horrific massacre, for which ISIS has claimed responsibility.

Omar Mateen allegedly pledged his allegiance to the Islamic State prior to gunning down 49 people at Pulse in June, a popular gay bar in the tourism capital of Florida. It was the deadliest shooting in U.S. history, and the devastating loss left both the LGBT community and the nation in shock.

Although the Istanbul attack has garnered some press coverage, it hasn’t garnered the same attention from U.S. media as previous attacks. In a comparative chart from Google Trends, the Reina shooting has generated about half the interest that the Orlando one did, and a quarter of the web traffic that followed the Paris tragedy. The Paris shooting scored a “perfect” 100 on the service, the highest score that Google Trends awards. Interest in “Istanbul” as a search term peaked with a paltry score of 22 on Jan. 1.

This is a sad and sobering illustration of our priorities when it comes to mass violence. Where are the Facebook filters commemorating the dead in Istanbul, telling mourners in Turkey that we stand with them? After the Paris attack, that was an automatic function on the social media platform — to allow users to broadcast their solidarity with ease. Profile pictures featuring my friends bathed in red with a white crescent and a star have yet to fill my News Feed.

There is, of course, a major difference between the Istanbul and Paris attacks: In Istanbul the victims were predominantly Muslim and brown. Although those killed were mostly foreign visitors, Al-Jazeera has reported that the deceased hailed from other countries in the relative vicinity: Saudi Arabia and Lebanon, Jordan and Kuwait, India and Morocco.

These are exactly the nations whose crying mothers and orphaned children are so frequently overlooked. In the wake of the Paris attack, there were hundreds of mass shootings all over the world — many of which took place in developing nations. Few of these trended on Twitter or earned their own hashtags. From January to June 2016, three major terrorist attacks took place in Istanbul, killing at least 62 people and wounding more than 250. Attackers targeted airports, shopping districts and the city square. Think of the latter as equivalent to an attack on New York’s Times Square, which would inspire international outrage.

These weren’t even the only mass shootings in Turkey during the same period. There were two in Ankara, the nation’s capitol, taking 66 lives and injuring at least 187 people.

Bombings and gunfire also caused immense devastation last year in Jakarta, Mogadishu, Karachi and Tunis. An attack on Baghdad during Ramadan killed 300, just one of many harrowing attacks perpetrated during the Islamic holy month.

There are a number of reasons that the deaths of hundreds of Muslims and brown people remain widely ignored by Americans. The first is whatThe Washington Post calls the “man bites dog” principle: Because there is so much bloodshed in the Middle East and these killings are so frequent, individual attacks gain less traction than domestic shootings than the one in Orlando, a city where news of a terrorist attack is relatively novel. Since U.S. armed forces invaded and destabilized Iraq in 2003, that country has been besieged by more than 2,000 suicide bombings, according to the University of Chicago Project on Security and Terrorism. Mass shootings are too numerous to count.

But this double standard also speaks to a truth that anyone familiar with tabloid news already knows: We care about some victims more than others.

The trope is frequently referred to as “Missing White Woman Syndrome,” which the Journalism Center on Children and Families defines as “the tendency by the news media to cover the murders and abductions of affluent or middle-class white girls far more than those of white boys, poor kids and kids of color, especially African-American.” Think about it: When a child goes missing or is tragically killed and her story gains national attention, does she look like Dakota Fanning or Quvenzhane Wallis? The young women in the spotlight are Caylee Anthony and JonBenét Ramsey, not, say, Alexis Patterson, a 7-year-old who disappeared on her walk to school in 2002.

The Black and Missing Foundation has estimated that 36.8 percent of children who go missing every year are black, even though African-Americans make up just 12 percent of the the U.S. population. Their stories are waiting to be told.

Our tendency to ignore the suffering of people of color is often referred to as the “racial empathy gap,” which I previously discussed in an article about white people complaining that they weren’t represented in Netflix’s “Luke Cage.” But as the Post pointed out, our sensitivity is also a product of proximity. We’re more likely to care about news that directly impacts us.

“Human beings are especially interested in events that might affect them personally,” wrote Brian J. Phillips in the Post. “If the media outlet’s readers or viewers are likely to feel that an event has implications for them, that will be covered as a more important story than if the events are unlikely to touch the audience’s lives. . . .  This creates an ‘it could happen to me’ factor, and also suggests that terrorism could affect someone we know.”

What Americans fail to realize is that just because a person might not have a direct connection to Pakistan or Iraq doesn’t mean that these tragedies have not affected our communities. They do affect Americans — our neighbors and friends. When a bomb goes off in the Middle East or South Asia, Muslims in the U.S. feel the impact, and they need our support. After the Orlando tragedy, members of the Islamic faith stood with the slain — as the Council on American-Islamic Relations and American Muslim Community Centers denounced radical extremism. White Americans rarely return the courtesy when it’s brown bodies attacked.

The lack of attention paid to terror that affects Muslims and people of color has toxic effects, not only on the victims who are told their lives matter less but on the ability of terrorists to do further recruitment. No matter the reason that the Istanbul attack slipped under the radar, organizations like ISIS can use it to further their propaganda — telling potential recruits that Americans don’t care about what happens to them. Our indifference is deadly.

If you want to end the widespread silence on the death of thousands of innocent people each year, you can help start the conversation. While hashtags supporting victims in Istanbul haven’t become as ubiquitous as they were in the case of the Paris attacks, they do exist: There's #PrayForIstanbul and #StandWithIstanbul.

It’s time to send the message that all victims of mass violence deserves to be mourned and remembered, even when they don’t look like us.