Hollywood has a few surprises in store: 5 predictions for the coming year in cinema

All is not lost. Adam Sandler, Elle Fanning and Captain Underpants have great things ahead for them in 2017 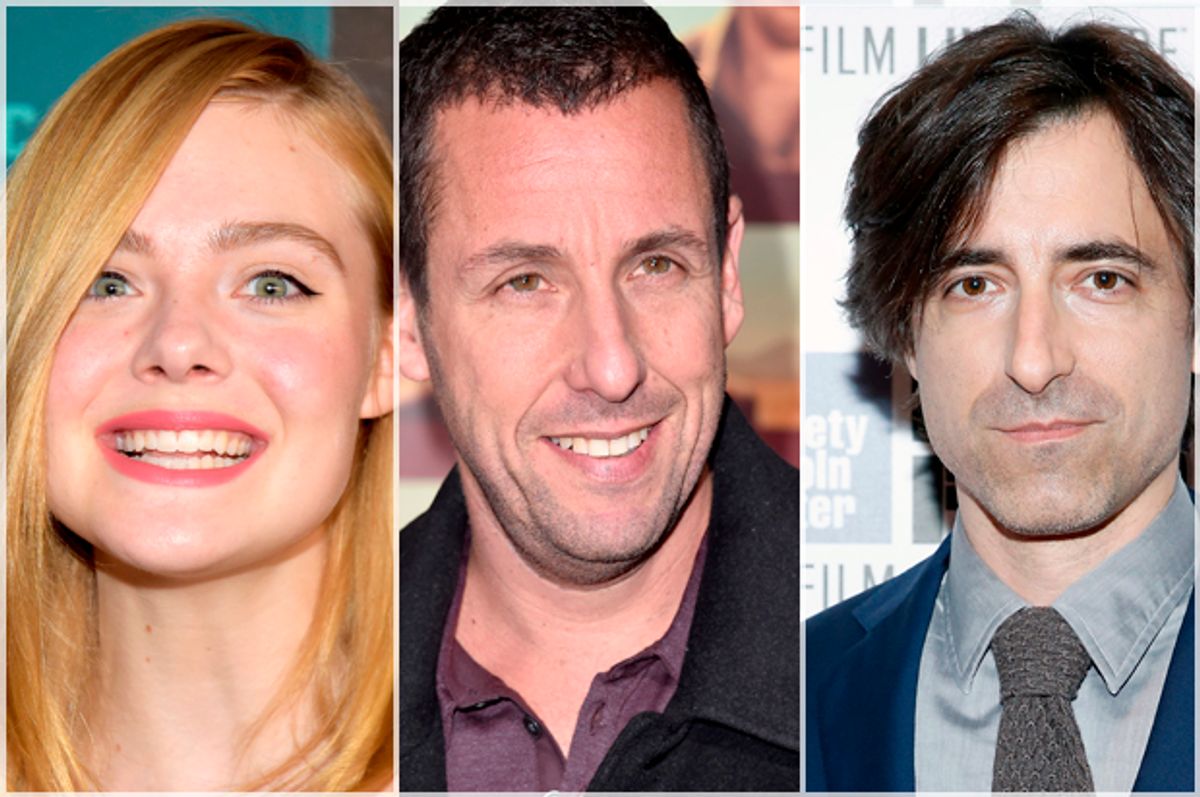 The modern period of moviemaking has been marked by a reliance on the known, the tested, the safe: Hollywood is dominated by tentpole franchises, especially ones that feature superheroes or fantasy worlds, and supplemented by low-budget Oscar bait.

The mid-budget drama can now more reliably be found on television, as can minorities’ stories and women’s stories. And yet, each year there are surprises, be they positive or negative. Who could have ever dreamed of seeing Harry Potter’s farting corpse ridden like a motorboat on screen? Or that a movie musical could enchant mass audiences the way “La La Land” did? And then there was Barry Jenkins, a newfound treasure to the casual movie fan, who deftly took viewers into a world rarely seen and rendered that world beautifully and with great nuance.

What will we look back at and be amazed by at the end of 2017? Allow us to venture a few predictions:

1. Elle Fanning will become the biggest actress in America.

Elle Fanning has been acting since she could speak: Her first role came at age 3, when she played a young version of her sister Dakota’s character in “I am Sam.” Since then she’s played bigger roles in equally big films (“Maleficient,” “The Curious Case of Benjamin Button,” “Super 8” and the recently released “20th Century Women” among them).

And yet, the surname Fanning conjures up “Dakota” first and “Elle” second. That could change this year as “20th Century Women” is getting rave reviews. And Elle Fanning is set to appear in five films in 2017. In one she will reteam with Sofia Coppola (she starred in Coppola’s atmospheric 2010 film “Somewhere”), who is remaking Clint Eastwood’s 1971 Western, “The Beguiled.”

Coppola consistently coaxes brilliant performances from actors of all stripes, but she especially has a way with teenage actresses (Kirsten Dunst in “The Virgin Suicides,” Scarlett Johansen in “Lost in Translation”). Buy young Fanning stock; she’s set to become a bona fide superstar.

In the past decade, Adam Sandler has transitioned from being one of the most dynamic comedic actors to a bad movie meme. Since 2004, he has acted in more than 20 movies, with only three of them earning a Fresh or Certified Fresh tomato rating on Rotten Tomatoes. It’s felt as though he’s been in more sequels than original films.

This year, though, looks promising. At least, one film that he’s slated to star in does. Sandler will play the lead in Noah Baumbach’s “Yeh Din Kissa Kissa,” a film that IMDb has described as being about “an estranged family [that] gathers together in New York for an event celebrating the artistic work of their father.”

Sandler has been at his dramatic best under the direction of auteurs with a vision of how to subvert his unique rage and physicality (see Paul Thomas Anderson’s “Punch-Drunk Love”). And Baumbach has been on a role as of late; two of his last three films (2012’s “Frances Ha” and 2015’s “Mistress America”) have been masterpieces.

Even if “Yeh Din Kissa Kissa” does nothing for Sandler’s reputation, in voicing Baumbach’s witty quips Sandler will have the opportunity to at least momentarily appear dignified.

The first installation of the next big animated franchise comes this year, with “Captain Underpants.” Besides being animated, this is a superhero film. It stars Kevin Hart and Nick Kroll and will traffic in nostalgia. A whole generation of viewers learned to read — and to joke — on Dav Pilkey’s series of books about two prankster kids and the unlikely caped crusader they accidentally created.

Now members of that generation have come of age — some have young children and others have taken the books to heart and have remained young children. The film will be released in June, giving it a six-month head start on the newest “Star Wars” installation for ticket sales.

4. “Slice” will be the year’s cult sensation.

Director Austin Vesely’s debut feature will be an ensemble murder mystery set in a Chicago world that includes ghosts, drug dealers, and werewolves. It’s inspired by “Magnolia,” “Twin Peaks” and George Saunders’ “CivilWarLand in Bad Decline.” And Chance the Rapper will be among the film’s stars. Enough said?

5. Director Kahlil Joseph is worth keeping an eye on and may deliver
an Oscar candidate.

Kahlil Joseph is not slated to release anything in 2017. But nor was he in 2016, when he directed Beyoncé’s tour de force album-film “Lemonade.” Joseph has mostly worked on the visual side of music. (He’s directed mind-bending music videos for artists including Flying Lotus and FKA Twigs and in 2015 he released an Arcade Fire concert film.)

To my mind, though, his most impressive work to date was a dual-screen art installation in Los Angeles’ Museum of Contemporary Art; the film, set to songs from Kendrick Lamar’s 2012 album, “good kid, m.A.A.d city,” movingly captured life in Los Angeles’s African-American neighborhoods. Joseph is among the most visually striking directors working today — also among the quietest. Interviews with him are few and far between. It wouldn’t surprise me if he were to out of nowhere release an Oscar-vying feature.