Breaking: The Greatest Living American Writer: Sure, Milo's book deal is a stain on the publishing industry. So what?

So, the alt-right adder got a big book deal. He's a skinny punk who can't hope to compete with me 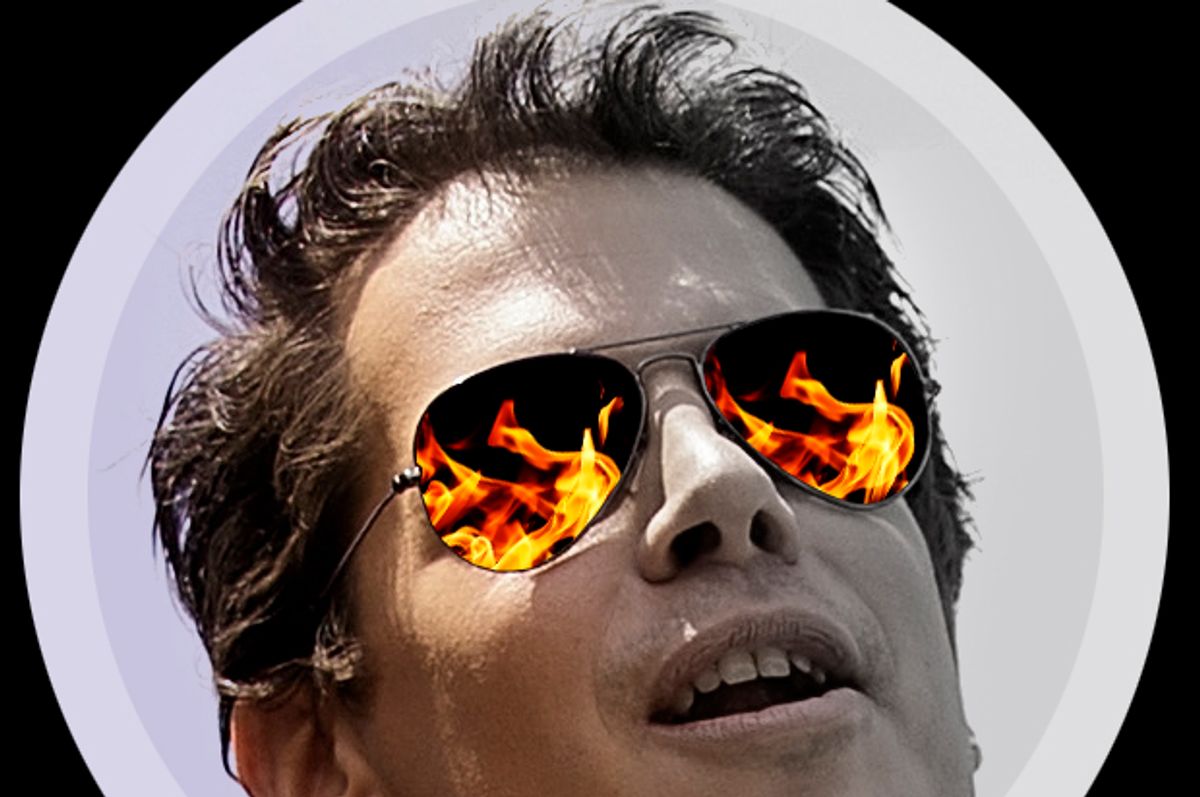 Like all my literary and media lessers, I’m completely outraged by Milo Yopodopoulous’ $250,000 book deal. I’ve signed six online pledges to never purchase his book “Generous” and also to never purchase another book by any other Simon & Schuster author, living or dead.

In addition, I refuse to read any book edited by anyone who’s ever worked at Simon & Schuster or by someone who’s represented by an agent who’s ever made a book deal with Simon & Schuster. I won’t traffic in works by people who are married to or have dated an S&S author or by folks who have ever attended a book reading by one. That narrows my list down to about half a dozen titles a year. It’s for the best, since I don’t like most books and am far too busy translating my own work into Portuguese to read other people’s work. So it’s very convenient that I’m appalled by Milo Yammerdamenrung.

But my revulsion arises from excessive familiarity. Anything that Milo does, I did better, with more style, decades ago. For those of you who don’t follow Milo’s work, he is a fancy, half-Jewish, British homosexual in his early 30s who rose to prominence on Breitbart as the leader of the alt-right (which stands for “alternative to being right”), offering scabrous opinions on such important topics as whether lesbians should be allowed to be Ghostbusters and if it’s racist to tell white people they’re being racist when they’re really just being sexist. Bitch, please.

Milo enjoys shocking interviewers by telling them that he enjoys “black dick,” but I was getting black dick behind the artillery depot during the Battle of Guadalcanal. This happened decades before Milo was born, when that desire was truly forbidden, as opposed to something that might get you a snigger on “The Graham Norton Show.” The resulting short story, “Kamikaze Negro Cock,” a portrait in literary courage that Milo will never experience, was published and banned in 47 languages and nearly cost me my "Spartacus"ghostwriting gig.

And while Milo may think he’s being outrageous when he says things like “Most of the reason I went gay is so I didn’t have to deal with nutty broads,” he’s really just borrowing from my old playbook. In 1961 I published an article in Playboy titled “Castrating Bitch Housewives Should Be Boiled Alive With Their Own Placentas, And Then Let’s See How They Like It.” I wrote, “Women are so clearly inferior to men that we really shouldn’t consider women human beings. They don’t even raise children right. If men could get pregnant, then you’d see some real baby care. Women need to put down the formula and stick their ugly heads in the toilets where they belong.”

The resulting howls of outrage were extinguished quickly by my male editors and earned me a delegate slot at the 1964 Republican National Convention, where I delivered my epic peroration, “A Non-Nazi Case Against the Jews, Even Though I Am a Jew.”

In 1971 I returned from self-imposed exile on the Amalfi coast to pen a piece for Esquire, “The Case Against Women’s Liberation,” in which I wrote, “women should not only not be liberated, they should all be imprisoned, or at least kept in small apartments until they apologize for the degeneration of traditional male culture. Then, and only then, will the global emasculation crisis end and Richard Nixon will finally be able to get some work done.”

The article was accompanied by a photo of my hairy chest decorated in red lipstick by the phrase “suck it, ladyfinger.” Subscriptions went through the roof. I subsequently bit off the tip of Audre Lorde’s ear on “The Dick Cavett Show.”  Top that, Milo Yappledapplesauce.

In 1982, I again channeled the Zeitgeist with my Rolling Stone article “Arcade Whore,” where I profiled an unfortunate female Baltimore teen who had the misguided desire of becoming the world’s greatest Ms. Pac-Man player. I wrote, “Girls will never be as good at video games as boys. They have different kinds of brains and they aren’t capable of much of anything. Girls suck at video games and they should be hunted in the streets if they try to play them professionally. Also, I loathe black people but I love their dicks, and I really hate Jews because I am afraid of my father.” The article won the National Magazine Award, beating out Tom Wolfe, Gay Talese (who is not actually gay) and three women who shouldn’t have been nominated.

And now we reach the present day, when I am a prominent blogger on this website and also for Brightfart.com, for which I am the leader of the “alt-wrong,” a group of angry bisexuals who think that the Japanese shouldn’t be allowed to make cartoons and that female superheroes should be illegal on college campuses — which is why Donald Trump is going to save America from itself. These are the kinds of ideas this country needs right now, spoken by truth tellers like me who love black dick. I have several lucrative speaking gigs scheduled. Therefore, I don’t care what any of you think.