Why is Donald Trump resisting the Russian hack findings? Michael Flynn may hold the answer

Trump doesn't want to know about Russia. The unhinged alt-right views of Michael Flynn and Steve Bannon may be why 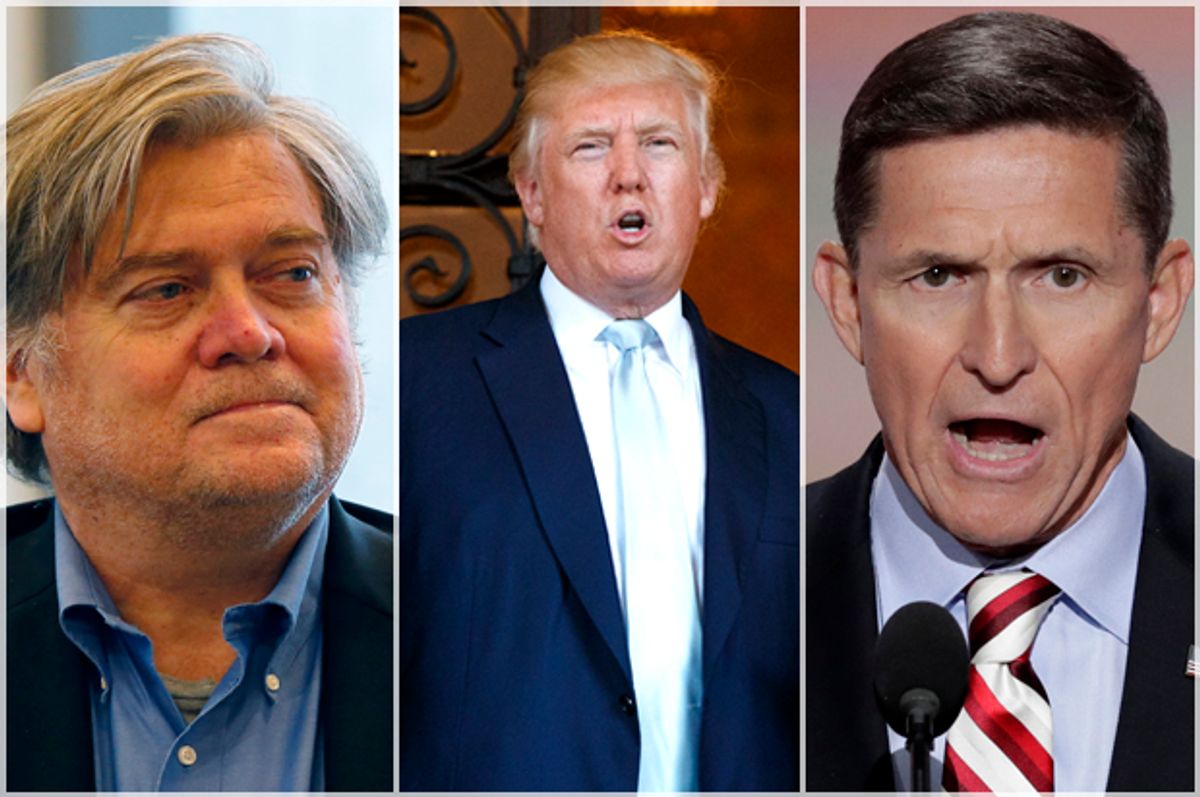 In anticipation of the release of a report commissioned by President Barack Obama, the top brass of the United States intelligence community appeared before Congress on Thursday to testify that the Russian government had interfered in last year's election. The director of national intelligence, James Clapper, declared, "This was a multifaceted campaign. So the hacking was only one part of it, and it also entailed classical propaganda, disinformation, fake news . . . whatever crack, fissure, they could find in our tapestry . . . they would exploit it." It's pretty dramatic stuff.

The report will be provided to President-elect Donald Trump over the weekend, and members of Congress will be briefed next week. An unclassified version is slated for release to the public as well, but details are already being leaked to the news media. Trump was not amused by the media's access as he indicated in a tweet:

Apparently, he is unfamiliar with the time-honored Washington practice of leaking, but he had better get used to it.

There is plenty of skepticism about the intelligence community's conclusions along all sides of the political spectrum. Trump is dismissing it out of hand. Most of the Republicans are keeping their powder dry, although hawkish Sens. John McCain and Lindsey Graham seem convinced, as do most Democrats. And after witnessing the weapons of mass destruction analysis prior to the invasion of Iraq in the past decade, many people on the left are naturally suspicious of the intelligence agencies.

Now is probably a good time to revisit that episode and remind ourselves of how it unfolded. Seymour Hersh's original New Yorker article, "The Stovepipe," exploring the way it all went down, still holds up today. The intelligence agencies got it wrong, for sure. But, as he explained, there was a specific reason:

What the Bush people did was dismantle the existing filtering process that for fifty years had been preventing the policymakers from getting bad information. They created stovepipes to get the information they wanted directly to the top leadership. Their position is that the professional bureaucracy is deliberately and maliciously keeping information from them.

This was why members of the left championed truth tellers deeply enmeshed in the Republican establishment and the intelligence community, like former ambassador Joe Wilson and his wife Valerie Plame, when they boldly stepped up.

As I wrote for Salon earlier, this episode wasn't the first time some players on the right were unhappy that the intelligence didn't show them what they wanted. The pattern goes back decades.

Concerning last year's allegations nobody has yet made a decent case explaining why the intelligence community would make a claim about a Russian attempt to undermine our election if they didn't have good evidence for it. The intelligence agencies are concerned with cyberattacks, to be sure, and like all bureaucracies they undoubtedly want more money and power to tackle the challenges. But they don't need to make this be about Russia to make a case, and it is certainly not in their interest to make an enemy of Donald Trump. They could be wrong, of course. But they have no rational reason to make this up, which suggests that they are genuinely convinced by their evidence.

It's easy to understand why Trump is reluctant to accept that the Russian government might have interfered in the election on his behalf. It just doesn't look right for a super-tough, macho candidate to be the favorite of a country that many people consider a rival to ours. Needless to say, a man with his ego cannot admit that anything but his own personal greatness brought him victory. (Yes, for all we know, Trump is in hock to Russian banks up to his eyeballs or just loves Vladimir Putin for his strength and manliness. Trump's stance on this issue is a enigma for sure.)

But there is a factor that looms large in this story that may simply explain some of Trump's behavior: former general Michael Flynn. When it comes to the intelligence community, Flynn serves as Trump's eyes and ears. The president-elect literally knows nothing about the workings of matters of intelligence, and there's is no evidence that he's spent any time trying to bone up. He has said he doesn't need daily briefings and seems to have outsourced taking in these updates to his trusted aide Flynn. And Flynn is an angry man with a major ax to grind.

Dana Priest has written for The New Yorker of Flynn's brief checkered career as the director of the Defense Intelligence Agency, in charge of all military attachés and defense-intelligence collection around the world. He had come into the job after some years on the ground in Iraq and Afghanistan, having success as a clandestine officer and creating new ways of using disparate pieces of information to target suspected terrorists. He was seen as undisciplined and somewhat reckless, but his mentor, former general Stanley McChrystal, had understood how to keep his quirkier personality traits under control.

Then Flynn got the big promotion and made a hash of it almost immediately, creating irrational and impractical changes and behaving erratically on the job. He sought out the Washington spotlight but apparently became lured into the right-wing fever swamps and started spouting outrageous falsehoods in public — including Islamophobic conspiracy theories— which his subordinates called "Flynn facts." And Flynn started to manifest a serious anger management problem. The agency had to create what Priest called a "parallel power structure" to keep the place running properly. After 18 months of this, Flynn was fired — by James Clapper, the director of national intelligence, who is now leading the charge on the Russian hacking story. According to Priest, Flynn was "livid."

When Trump started getting classified briefings, Flynn accompanied him. It has been reported that four different sources say he became unruly and repeatedly interrupted the briefers, challenging their facts to the point where New Jersey Gov. Chris Christie, who was also at the meeting, had to tell him to calm down. Flynn's response when asked about it was that the story was "total bullshit. . . . They're lying." He is apparently is still angry and convinced that his "Flynn facts" are correct.

Flynn may have an ally in another important Trump administration figure, Steve Bannon, who is associated with the "alt-right" movement, for which Russia has become increasingly important and its president, Vladimir Putin, is often seen as a sympathetic figure. Bannon has a special affiliation with Russian history, however superficial and insincere. It's entirely possible he would back Flynn's denunciation of intelligence analyses for his own purposes, lending Flynn even more credibility with Trump.

All of this is "Kremlinology," of course — meaning that a certain amount of guesswork is involved, since trying to sort out what's really going on requires reading between the lines. But there's a reason why Trump is so adamant that the intelligence agencies are wrong and that he knows things they don't know. And there's really only one person in his close circle who would be telling him such things. If ever there was a president who needed a steady hand to guide him on these important, delicate matters, it's Donald Trump. Too bad the man he's leaning on is Michael Flynn.