A new war on birth control: Trump's victory has empowered the sex scolds 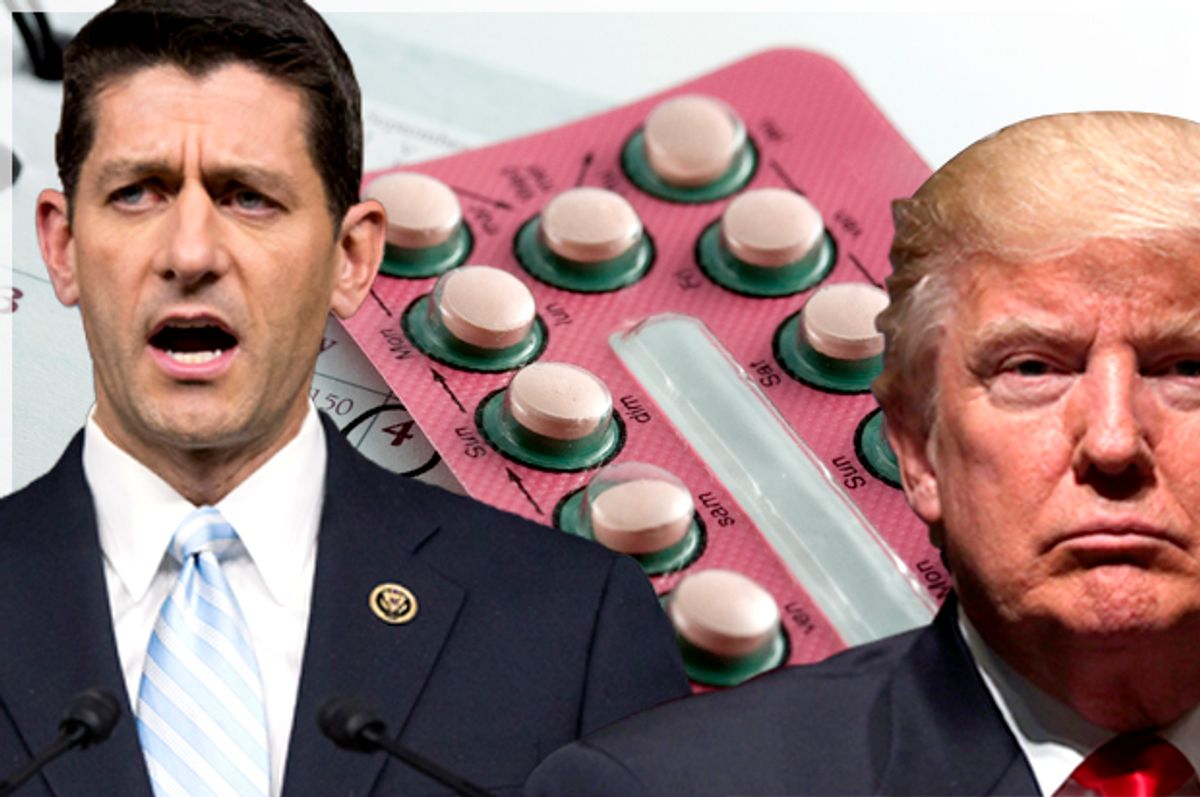 Bad news for anyone who hoped that Donald Trump's history as an adultery-loving and fornication champion might put a chill on the Republican Party's war on sex: It seems that his election is instead inspiring the party of scolds to double down on their quest to punish ordinary people for having sex because they like it.

Trump, being wealthy and male, gets a pass for his lengthy history of sleeping with any woman who will have him — and bragging about grabbing the pussies of those who won't. But for those of us who aren't privileged enough to be wealthy men, Republicans are going to do everything in their power to inflict punishment in the form of sexually transmitted diseases and unwanted childbearing.

Trump's willingness to fully embrace the Junior Anti-Sex League was demonstrated on Thursday, when his transition team announced the hire of Katy Talento as domestic policy counsel for the White House, focusing on health care. Not only is Talento against abortion — which is par for the course in Republican circles — she's also an anti-birth control fanatic.

Like most anti-contraception militants, Talento has an elaborate set of pseudoscientific arguments against the use of hormonal birth control. In a 2015 piece she wrote for The Federalist titled "Miscarriage Of Justice: Is Big Pharma Breaking Your Uterus?" Talento tried to scare women away from using effective, female-controlled methods of birth control, like the pill or the implant, by claiming these methods cause miscarriage and infertility.

It's all nonsense, of course. The pill doesn't cause miscarriage and most research shows that it doesn't affect fertility. It may, in fact, improve fertility when a woman goes off the pill and tries to become pregnant.

"Decades of established science clearly show contraception prevents pregnancy — it does not cause abortion or miscarriages," Dr. Anne Davis, a consulting medical director for Physicians for Reproductive Health, said in a statement. "Women and doctors know from research, as well as our collective experiences, that birth control does not harm a woman’s fertility or health."

Talento's half-baked arguments are a classic example of a conclusion looking for an argument. The only reason to cherry-pick a couple of bad studies or arguments, while ignoring the scientific consensus that the pill is safe and effective, is because you don't like women using it and you're trying to come up with some nonsense to deter them. And the only reason not to have women take the pill is because you think it makes it too darn easy to have sex.

The Talento pick should put to rest any notion that Trump will stand in the way of the deep-seated Republican longing to deprive women, especially those with a low income, of access to contraception.

With drool practically dripping off his lips, House Speaker Paul Ryan announced on Thursday that Congress would try to defund Planned Parenthood and end Obamacare in a single bill, as soon as possible. While there are many horrific ramifications to such an act, one of the biggest would be stripping millions of women of their current methods of contraception.

About half of Planned Parenthood's patients — more than a million people — are on Medicaid. Ryan's plan would immediately mean that this group of individuals would be prevented from relying on their current reproductive health center. That would leave hundreds of thousands of women abruptly cut off from contraception access, and many of them will not be able to find another provider, especially on short notice.

For many, there will be no way to restore that access, as half of Planned Parenthood clinics are in medically underserved communities, meaning that there are few, if any, alternatives for the women who visit them.

In some states, Republicans have tried to justify cuts to Planned Parenthood by presenting supposed lists of alternative providers for women on Medicaid. These lists were, to put it bluntly, constructed of lies. The majority of clinics on these lists do not have a gynecologist on staff. In Florida, the list of "alternatives" to Planned Parenthood included dentists, optometrists and school nurses.

Even if women can find community clinics that do offer gynecological care, it's often not as good as what's available from Planned Parenthood, which offers more flexible scheduling. Generally speaking, these clinics are less equipped to handle contraception needs. Planned Parenthood facilities often have a large stockpile of contraceptive medication, so women can fill their prescriptions on-site — a service more general health clinics typically can't provide.

Repealing Obamacare, even if Republicans do bother to come up with some flimsy replacement, will be devastating for women's reproductive health care. Right now, well-women visits and contraception services are covered by insurance plans, without a co-payment required. It's unlikely these aspects of Obamacare will survive.

That's a problem, because zero-co-payment contraception has been a wildly successful program. The percentage of women who had to pay nothing out of pocket for oral contraception rose from 15 percent to 67 percent from 2012 to 2014. Not only does that save money; it also improves the rate for contraception use. Research shows that women are more likely to use contraception consistently and effectively if there's no cost. Other research has demonstrated that when women have to pay out of pocket for contraception, they are often tempted to skip their pills or otherwise skimp on birth control in order to save money — which frequently leads directly to unintended pregnancy.

Of course, a sudden drop in the number of women using contraception would be a feature, not a bug, of Republican attacks on Planned Parenthood and Obamacare. The nominal leader of their party may be a man who spent years going on Howard Stern's show to brag about his sex life, but the GOP continues to begrudge ordinary women access to basic sexual health care.