Donald Trump, Julian Assange and Russia: How they're connected, and how they changed an election 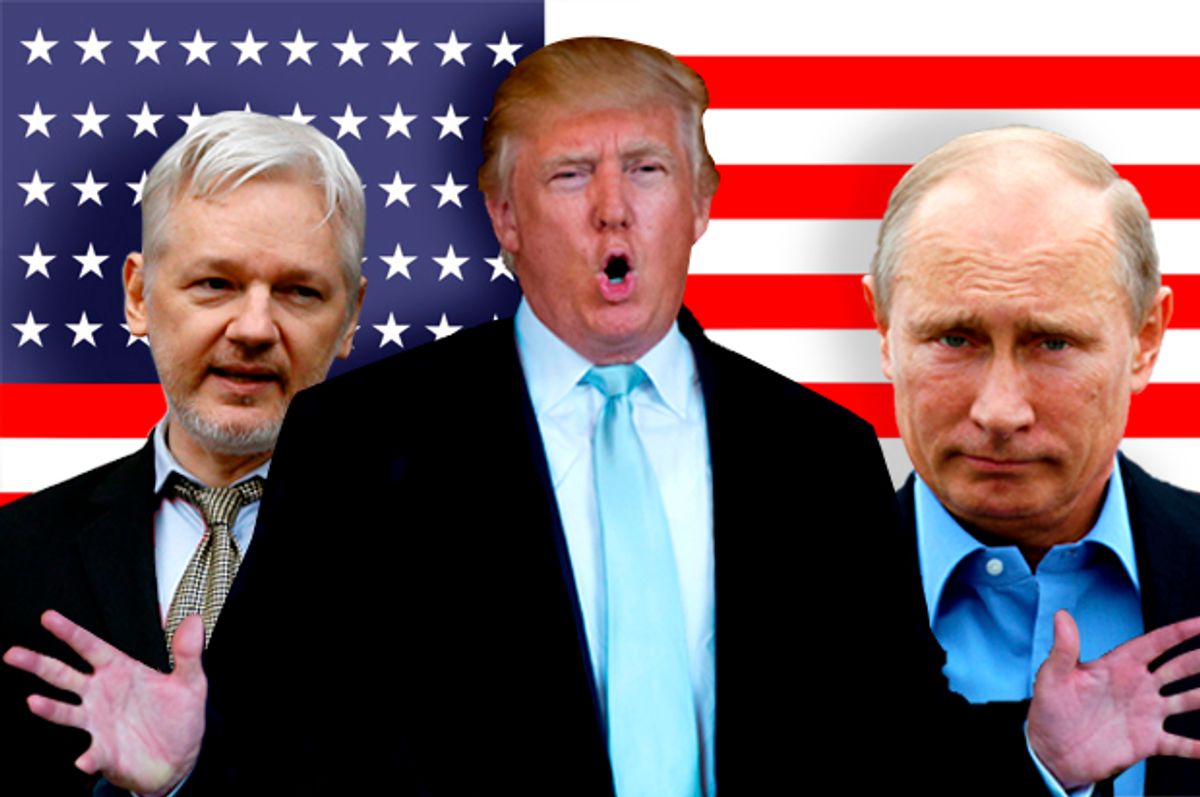 Right now there are two debates raging in American politics which, though closely related, are not one and the same.

On the one hand, there is the question of Russia's alleged hacking of the Democratic Party, which is believed to have occurred in part so that they could help the pro-Putin candidate Donald Trump defeat his anti-Putin opponent, Hillary Clinton. While the entire intelligence community and several independent cybersecurity firms all agree that Russia was behind the attacks, it is valid to point out that they have not yet provided proof that Russia was involved.

Then there is the second, related issue — namely, that both Trump and Julian Assange, the founder of WikiLeaks, which published the Democratic Party emails, have troubling connections to the Russian government. This is true — regardless of whether Russia was behind the election hacking — and it's important to understand the hard facts behind the Trump and Assange connections with Russia, both in order to separate truth from allegation and to shed another light on why individuals outside the cybersecurity sector find the allegation that Russia was responsible for the hacking so plausible.

Regardless of whether Russia was behind the election hacking, one thing is clear: When Trump first caught wind of the allegations, his reaction was to encourage the fascist state to continue doing it.

"They probably have her 33,000 emails, too. I hope they do," he said during a July press conference. "Russia, if you're listening, I hope you're able to find the 30,000 emails that are missing. I think you will probably be rewarded mightily by our press."

One of Trump's first campaign managers, Paul Manafort, used to work for pro-Putin politicians in Ukraine.

Although Manafort would eventually be asked to resign from the Trump campaign (in part because of the backlash over his Russia connections), this doesn't change the fact that the campaign manager Trump chose to replace Corey Lewandowski had a long history of ties to pro-Putin politicians in Ukraine. This included President Viktor Yanukovych, who had to flee to Russia after Ukraine waged a revolution in 2014 — the same year that Russia invaded that country now that its puppet was out of power.

Despite taking little interest in the Republican National Convention's official platform, Trump and Manafort did push for one issue — appeasing Russia.

Although the Trump campaign reportedly had little interest in shaping their party platform during the Republican convention in July, they spent a disproportionate amount of time softening the language of a plank that condemned Russia for its invasion of the Ukraine. Most glaringly, it replaced the call for "providing lethal defensive weapons" to Ukraine with one merely asking for "appropriate assistance."

The man Trump has appointed as his national security adviser, retired Lt. Gen. Michael T. Flynn, has a lot of unsavory connections to the Putin regime. These include doing a paid series of events in Moscow including a paid speech, an appearance at an anniversary for the state-funded TV network, RT, and sitting next to Putin during a subsequent dinner party. Flynn has made several appearances on RT since then and has repeatedly advocated that America align its foreign policy interests more closely with Russia.

Trump's incoming secretary of state, Rex Tillerson, has bragged about how close he is to Putin.

Aside from having no government foreign policy experience whatsoever, the most alarming thing about ExxonMobil CEO Rex Tillerson's nomination as secretary of state is that he has a disturbingly cozy relationship with the Putin regime. This includes bragging about having a "very close relationship with Putin" earlier this year and striking a $500 billion venture in 2011 with Rosneft, a Russian oil company that is majority-owned by the Russian government.

After major banks stopped lending Trump money due to his multiple bankruptcies, the desperate businessman started turning to Russian financial interests with close ties to the Putin regime in order to continue funding his various business ventures. Projects from Trump Soho to Trump's first real estate project in Toronto were subsequently revealed to have been tied to shady Russian business interests.

The Kremlin has been defending Assange for a very long time.

In 2010, an anonymous Russian official suggested that Assange be given the Nobel Peace Prize; on the very next day, Putin himself came forward to claim that the rape charges against Assange in Sweden were politically motivated. This happened after it was alleged that Israel Shamir, a former WikiLeaks employee, was discovered to have shared sensitive documents with Belarus (a nation aligned with Putin) that allowed them to repress pro-democracy dissidents. Assange denounced Shamir.

Assange specifically requested protection from Russian security once he started living in the Ecuadorian Embassy in London.

As Focus Ecuador reported in August 2015:

"In some instances, the 'guest' requested that he be able to chose his own Security Service inside the embassy, suggesting the use of Russians. For the SENAIN agents, such choice would have meant, among other problems, the loss of control of the Embassy itself leaving the 'guest' free access to control and manage the flow of information. The report even asserts that it would have been the equivalent of 'a coup in the embassy.'"

Assange hosted his own talk show on RT.

While Flynn can at the very least claim he has only made appearances on RT, Assange actually started hosting his own show on the network. RT is not some Russian equivalent to NPR or PBS, but a Kremlin-financed news network that exists for the primary purpose of advancing a pro-Putin agenda. It is impossible to sincerely believe that Putin would allow Assange to have a show on his network if he didn't believe the WikiLeaks founder was an ally.

Assange claims to have convinced Edward Snowden to flee to Russia.

"I thought, and in fact advised Edward Snowden, that he would be safest in Moscow," Assange told Democracy Now. In another interview with the Times, Assange elaborated:

"Snowden was well aware of the spin that would be put on it if he took asylum in Russia. He preferred Latin America, but my advice was that he should take asylum in Russia despite the negative PR consequences, because my assessment is that he had a significant risk he could be kidnapped from Latin America on CIA orders. Kidnapped or possibly killed."

Assange hypocritically denounced the Panama Papers because they made Russia look bad.

One of the most common defenses of Assange is that his goal is to undermine all repressive governments, causing him to view no distinction between a member of the American political establishment like Hillary Clinton and other state establishments elsewhere. This would be believable if he didn't attempt to discredit the Panama Papers, which alleged corruption among many of Russia's political and financial elites (including a $2 billion overseas account owned by Putin), as an American plot — without the slightest shred of evidence.

#PanamaPapers Putin attack was produced by OCCRP which targets Russia & former USSR and was funded by USAID & Soros. pic.twitter.com/tgeKfLuROn

US govt funded #PanamaPapers attack story on Putin via USAID. Some good journalists but no model for integrity. pic.twitter.com/5MnZbB6Zwz

Assange has tried to defend not leaking on Russia by saying that the nation has many "vibrant publications."

In an interview with La Repubblica last month, Assange tried to defend the fact that WikiLeaks hasn't published damaging documents about Russia by arguing the following:

"In Russia, there are many vibrant publications, online blogs, and Kremlin critics such as [Alexey] Navalny are part of that spectrum. There are also newspapers like Novaya Gazeta, in which different parts of society in Moscow are permitted to critique each other and it is tolerated, generally, because it isn’t a big TV channel that might have a mass popular effect, its audience is educated people in Moscow. So my interpretation is that in Russia there are competitors to WikiLeaks, and no WikiLeaks staff speak Russian, so for a strong culture which has its own language, you have to be seen as a local player."

The Intercept's Glenn Greenwald has argued that this and other aspects of Assange's interview were taken out of context. He has claimed that Assange was merely trying to explain "that any Russian whistleblower who wanted to leak information would have many better options than WikiLeaks given that Assange’s organization does not speak Russian, is composed of English-speaking Westerners, and focuses on the West."

While it is true that this was Assange's larger point, one of the arguments he made to advance it was the strong implication that criticism of the government is already possible in Russia. The 34 journalists who have been murdered there since Putin took control, as well as the countless others who have suffered in the nation that Freedom House ranked 180 out of 199 in terms of press freedom (behind Sudan and Iraq), might disagree.