Trump's scarily effective White House propaganda apparatus will work from the bottom up, posing as journalism 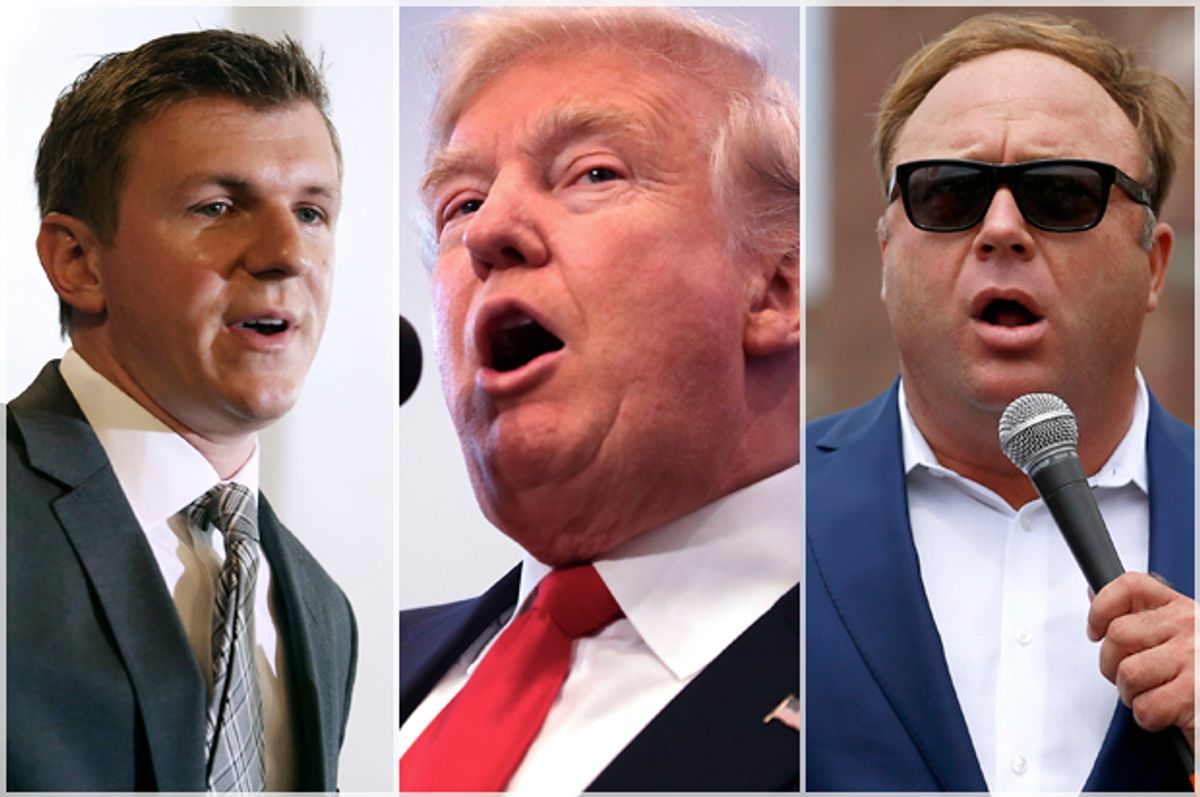 Donald Trump ran a campaign built almost exclusively on lies and demagoguery, so it stands to reason that his presidency will usher in a new era of deceitful propaganda as well. It could very well dwarf the George W. Bush administration's infamous propaganda push around the Iraq War.

As detailed in a recent report from Media Matters, is that Trump can rely on a pre-existing infrastructure of well-funded conspiracy theorists, like Alex Jones, James O'Keefe, and David Daleiden, who pose as "citizen journalists" and pump out a steady stream of lies and misinformation to support the Trump agenda.

This kind of propaganda is strikingly different from the propaganda efforts of previous right-wing administrations in the past, which tended to be more top-down in nature. Take, for instance, the Bush administration's efforts to sell the American public on the Iraq War. Those efforts were largely coordinated by the Bush administration, which constructed an elaborate but false narrative — that Saddam Hussein had weapons of mass destruction — and then spread White House officials and surrogates across the media to keep pushing that story until the public bought into it.

But the Trump propaganda machine is not top-down. While sites like Infowars and Breitbart News -- major hubs for the right-wing hoax stories created by these fake journalists -- are heavily linked to the incoming Trump administration, they are technically independent organizations.

This kind of propaganda could be a lot more successful than the old-school, top-down kind. Because they are independent, these websites might be treated as more trustworthy by readers than they would if they were more clearly taking marching orders from Trump. And because they embrace the trappings of journalism, they may be able to fool a significant proportion of the audience into thinking that what it reads on such sites is objective or impartial journalism, instead of partisan propaganda.

But in reality, this combination of apparent independence and a finely honed ability to mimic journalists is exactly what makes Jones, O'Keefe, Daleiden and the websites that publish them so dangerous.

“Structurally, where they have carved out their space, they have the best of both worlds," Carusone said. "They have the maximum amount of power, in terms of identifying themselves as journalists, and the least amount of accountability and responsibility.”

Carusone noted that even conservative-oriented media organizations like Fox News or the National Review have some amount of institutional accountability. But independent operators like O'Keefe or Jones can just keep churning out blatantly false stories, disguised as journalism, without any threat of being held to account.

These pseudo-journalistic outlets have been around for a long time, and have already done serious damage. In 2009, O'Keefe faked a story to make it look like members of ACORN, a community organizing group, were enabling sex traffickers. The result was that Congress, with some Democrats shamefully joining in, defunded the group, leading to its collapse.

Daleiden tried a similar stunt in 2015, creating deceptively edited videos and falsely accusing Planned Parenthood of aborting fetuses in order to sell the tissue to medical researchers. That hoax was used by Republicans across the country to justify defunding the reproductive health organization, which was once widely supported by members of both parties.

Most recently, there was the "Pizzagate" controversy, where reams of fake stories accused Hillary Clinton and John Podesta, her former campaign manager of being involved with a child sex ring allegedly run out of a Washington pizzeria. That of course led to a North Carolina man driving all the way to D.C. to "investigate" these claims, and firing a gun in the restaurant.

Now this loose network of fake journalists will be working with and supporting a presidential administration. To make it worse, Trump himself has a long history of disregard for the truth, which has led him to openly embrace and validate these independent propagandists. He has often told his followers that such sites are more trustworthy than those run by actual journalists. Trump has even hired Stephen Bannon, who ran Breitbart for years, as his chief White House strategist, consummating the marriage between the incoming administration and this independent but Trump-friendly propaganda arm.

There's almost no way this won't spiral out of control. The election showed that many people, especially conservatives, will read and share all sorts of content, no matter how preposterous it may be, if it upholds their worldview. Now such fake news will be validated and promoted by most powerful elected leader in the world, threatening to tear down the last boundaries between actual information and propagandistic nonsense.