Image is everything: What Megyn Kelly's network move tells us about NBC, and herself

As the popular news personage jumps from Fox to NBC, we consider what she and the network gain . . . and risk 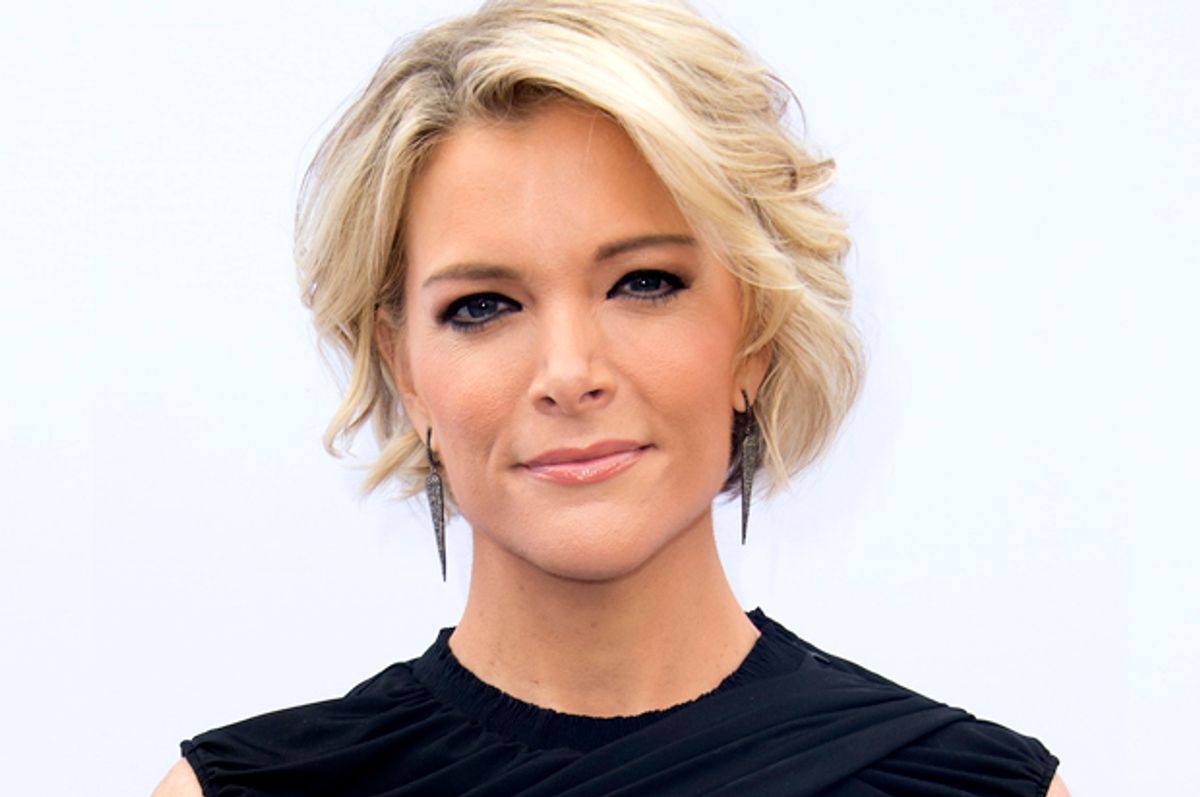 Historically, the month of January has been very good to Megyn Kelly.

In January 2014, three months after “The Kelly File” made its debut on Fox News, a fawning Elle magazine profile described her as “an almost self-parodically perfect apotheosis of her species, the FOX fox.”

A Megyn moment, Rutenberg explained, “is when you, a Fox guest — maybe a regular guest or even an official contributor — are pursuing a line of argument that seems perfectly congruent with the Fox worldview, only to have Kelly seize on some part of it and call it out as nonsense, maybe even turn it back on you.”

He goes on: “You don’t always know when, how or even if the Megyn moment will happen; Kelly’s political sensibility and choice of subjects are generally in keeping with that of the network at large.”

Skipping ahead to January 2016 -- past her game-changing turn as moderator of the Republican presidential debate, where she confronted Donald Trump on his sexist and questionable temperament -- Vanity Fair’s Evgenia Peretz warned all blowhards that “Megyn Kelly Will Slay You Now.”

At last, here we are in January 2017, closing Kelly’s employment file at Fox News and witnessing the turn to the next part of her career with NBC News.

Gauging the extent to which the mediasphere shuddered at Tuesday’s news of Kelly’s departure from Fox to take a job at NBC, one would have thought that some natural disaster had knocked the world off of its axis. But the sun came up this morning, didn’t it? The earth still rotates. Maybe Matt Lauer can exhale a little over his weekend brunch.

Let’s not kid ourselves. Kelly’s leap from cable to a Big Three broadcast newsroom indicates a seismic shift that’s been rumbling under the crust for years. Mainstream broadcast and cable news has steadily veered to the right since Fox News aligned itself with the Bush administration after 9/11, as news organizations have done everything possible to capture some of the audience the conservative network has attracted.

NBC’s hiring of Kelly, one of Fox’s most popular personalities, is simply the next move in this game. She leaves Fox at a time that saw “The Kelly File” established as the second-highest-rated show on Fox News, averaging 2.7 million viewers at 9 p.m. Fox reportedly offered her $25 million to stay, which NBC is said to have been unable to match. Kelly made the jump anyway, setting off alarms across the media landscape. On Thursday gossip site Page Six began circulating the rumor that Kelly could bump “Today” co-anchor Savannah Guthrie out of her seat. Media reporters have spun into a frenzy.

All told, Kelly’s handling of her image and career has been nothing short of masterful. Few profiles of the anchor leave out some mention of her flaxen hair, the perfect timbre of her voice, those enviable stems that marched down the hallway from the anchor desk in the 2012 presidential election to call out Karl Rove on his crap-filled wishful thinking.

Women in news are always subjected to sexist coverage of their appearance. Kelly has used it as part of a careful sculpting of her persona, an ongoing artistic endeavor one may witness in her damn near romantic farewell announcement on Tuesday’s “The Kelly File.”

“Now I don’t actually know most of you, so perhaps it’s not true love. But it’s the kind of feeling that makes one feel connected to another human being,” she said. “And that is after all why I believe we’re here: Human connection. The truth is I need more of that in my life, in particular when it comes to my children, who are 7, 5 and 3.”

That's right America: Kelly loves you. Well, maybe not really. She does want to connect, though. That's real.

How much additional time she’ll get with her family over the long term is debatable. (Her non-compete with Fox might keep her benched for at least six months.) Her transition to NBC, though, assures a much higher level of exposure to American TV viewers. Not to mention that her aspirations to be seen as a journalist would have been further compromised the longer she stayed with Fox.

Between her feuds with Sean Hannity and Trump, and the network’s doubling down on its strategy to cozy up to an administration antagonistic to reporters, her choice was either to make the leap or follow the lead of Shepard Smith and hunker down for the long term. Knowing what we know about that place’s work environment under former Fox News chief Roger Ailes, surely option two was not all that tempting.

Kelly’s NBC deal includes her own daytime program, which could replace the 9 a.m. hour of “Today,” as well as anchoring a Sunday night news magazine that could compete with CBS’s “60 Minutes,” and participating in breaking news and political coverage.

She could parlay this step up into any number of high-profile gigs that would not have been available to her had she chosen to stay at Fox. Depending on how she’s received, this move also may position her for a hard fall.

Success in daytime is greatly dependent on how much the audience embraces a figure’s personality. Succeeding in the evening news realm requires mastering some tricky alchemy that combines that with a sense of trustworthiness and gravitas. The files of TV history contain plenty of examples of evening news personalities who couldn’t effectively make the transition to daytime and vice versa, including Anderson Cooper and Meredith Vieira. Even Katie Couric, the popular “Today” host, struggled to gain a foothold when she transitioned into the anchor slot at CBS News.

Kelly’s reputation may grant her better odds coming into this game. Then again, there are still a number of Megyn moments that could come back to haunt her, like that time she declared that the whiteness of Santa and Jesus is “a verifiable fact,” or her early alignment with the Tea Party against establishment Republicans.

There are also questions to be considered about what Kelly’s hire signals about the direction in which NBC’s news coverage is heading. Fox News viewers have a fierce allegiance to the brand, and many consider NBC to represent the epitome of left-wing bias (The vitriolic posts that went up on Kelly’s public Facebook page following NBC’s announcement, calling her a traitor and worse, reflect that passion.) News Group chairman Andrew Lack would not have hired Kelly if she didn’t offer an opportunity to peel moderate conservatives away from Fox without alienating the network’s news viewership.

Hedging his company’s bets on that front, Lack also appears to be reconfiguring the tone of MSNBC, which leaned leftward years ago and has been in a losing rating battle with CNN ever since. Its hiring of former Fox anchor Greta Van Susteren, who debuts “For the Record with Greta” on Monday, might be viewed as an effort to add a counterweight to a line-up that includes liberal pundits Rachel Maddow and Lawrence O’Donnell.

But it’s also troubling that Van Susteren’s hire at MSNBC, and Kelly’s at the broadcast network level, come less than a year after NBC News’ nasty ouster of Melissa Harris-Perry, one of the few minority women to host a news program, and whose weekly show on MSNBC suddenly vanished at the end of February 2016, in the heat of the presidential election campaign.

As for what this all means for Fox . . . well. It quickly answered the announcement of Kelly’s departure by moving Tucker Carlson into the time slot previously occupied by “The Kelly File.”

Although Fox is seeking other women to step into the spaces left by Kelly (and Gretchen Carlson before her), one can assume that the O’Reilly-Carlson-Hannity primetime wall will remain unbroken for the foreseeable future.

Expect to see Kelly make the rounds in the months leading up to her broadcast news debut in the meantime to connect to audiences and alloy her image with NBC’s news brand. What shape that takes remains to be seen. We’ll have a better idea by next January.