Lessons from Ronda Rousey vs. Amanda Nunes: What 48 seconds of fighting can teach us about gender, sexuality and race in UFC

When Nunes defeated Rousey in a spectacularly brief bout, the differences between two UFC stars became the story 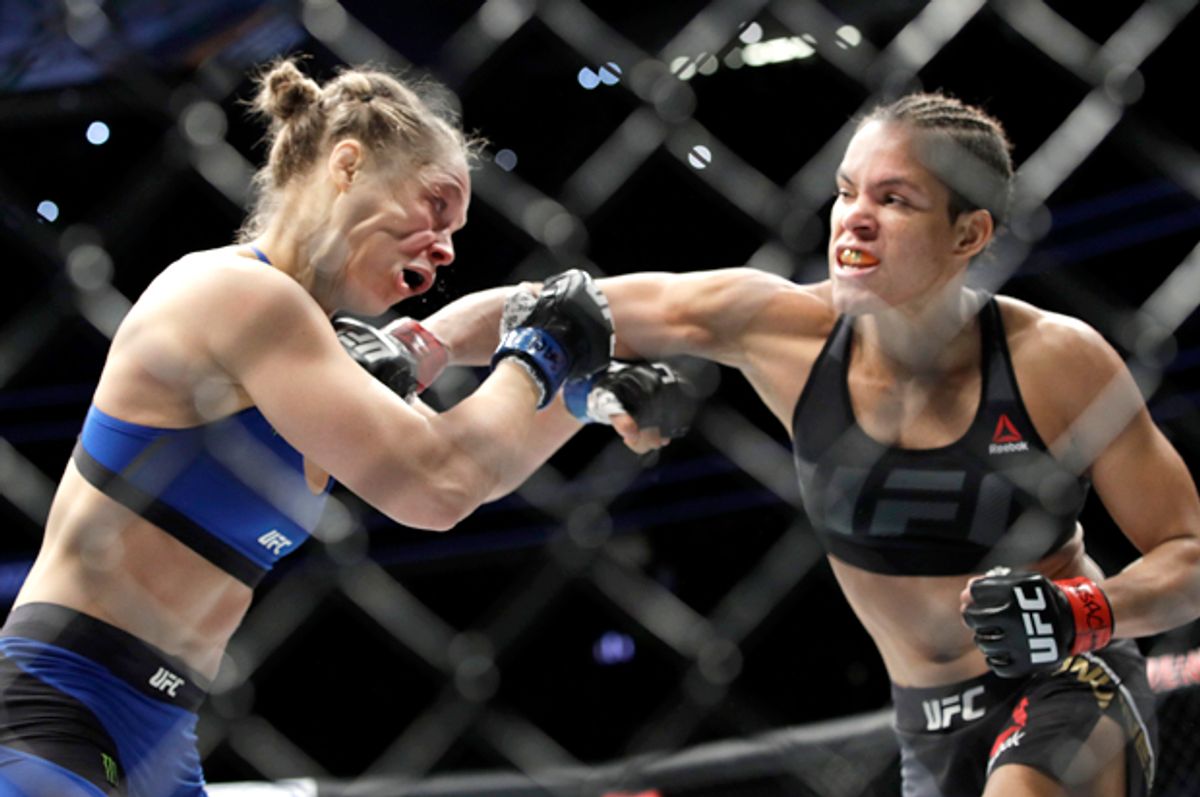 Looming over the tipsy throngs walking the Vegas strip, two female headshots smoldered on high. One resembled a sultry cover girl, blonde locks loose around the cheekbones, sculpted brows arched over a smoky glare. The other, hair slicked back and face devoid of makeup, glowered androgynously, jaw set in a gladiator’s grimace. “She’s back,” warned the all-caps text dividing the two, black against a heavenly LED backdrop.

Another "Housewife" franchise? A "Project Runway" spinoff? Lo and behold: the new public face(s) of the Ultimate Fighting Championship.

Twenty years ago, the UFC was considered too raucous for cable; even pay-per-view wouldn’t touch it. Blockbuster Video (RIP) rented VHS tapes to untold millions feening for fighters who broke the mold (and sometimes jaws). With the entry of competitive mixed martial arts (MMA) into the mainstream, it would seem that pretty much anything goes below the belt—including the anatomy hidden there. Enter UFC 207, headlined by Ronda “Rowdy” Rousey vs. Amanda “the Lioness” Nunes.

“There is no history of anything happening until it does. And then there is.” So said Rousey’s mother, judo champion AnnMaria De Mars, referring to her daughter’s ascent as the first female UFC champion in 2012. What six-time bantamweight champion Rousey has done for the public face of the UFC — not to mention women's fighting — is unquantifiable. In 2015 she was the third-most-Googled person; she is also reputedly the highest paid fighter — male or female — within the mixed martial arts organization.

In this light, Rousey’s stunning (and stunningly brief!) defeat to Nunes on Dec. 30 might seem to be the end of an era. But it also might signal the beginning of a new one — perhaps more inclusive, and complicated, than ever. “This moment is my moment,” declared the newly belted UFC champion Amanda Nunes minutes after quashing Rousey in only 48 seconds of the first round. Nunes not only whipped Rousey out of contention in less than a minute, she’s the first openly gay UFC champion to date. Women are here to stay in the UFC — and not just as straight-boy eye candy.

Not that this was ever what Rousey was — or is. As her consistent shunning of ornamentation during her matches testifies, she has never entered the ring mistaken for a ring girl (a role itself worthy of question). Nor is Nunes always the cap-skewing hardbody she appeared following her win (see her cuddly Instagram pics of her and her girlfriend for proof). Both women bring a complexity to the image of the sport that challenges pat conceptions of power, sexuality and violence — exposing the fault lines of both latent racism and heteronormative beauty standards. Here’s where things get messy and interesting — and where it’s vital not to pull any punches as far as the intersectional nature of professional fighting as both sport and public spectacle. Rousey vs. Nunes isn’t just about gender; it’s about the many layers of oppression that each athlete has had to confront before and after the ring.

When Rousey was defeated, most of the (mostly male) audience packed to capacity in the downtown St. Louis screening I attended were all but silent. I suppose that, for a lot of them, it was exciting to see Rousey, a Sports Illustrated swimsuit model, consistently defeat a series of less comely girls. And I suppose that (for some) it’s less exciting to see a knockout get knocked out (and by a cornrowed Latina lesbian). Sports commentators have resorted to verbs like “battered” to describe Nunes’ actions against Rousey — accurate, yes, but redolent more of domestic assault than one pro athlete doing to another pro athlete precisely what she’s trained to do.

“Rousey’s head was snapped back enough times…for the crowd to see what was coming,” wrote The Guardian’s Josh Gross. Before being “rescued…from further punishment” by a chivalrous referee, “Rousey’s night — and perhaps her career — had been ended by 27 strikes that contorted the former champion’s face in awful ways.”

Awful ways? Isn’t that partly (er…totally) the point? It’s hard to believe the same would be said about a male fighter, no matter how inglorious his defeat or dramatic his expressions. And it’s hard to imagine the same said about a female face, like Nunes’, not so cherubically pretty and white. It’s also hard to feel terribly bad for Rousey given the gross inequality of the two fighters’ pay. For each second that her visage was dreadfully compromised, Rousey made $62,500 ($3 million total), while Nunes bagged only $200,000. In a world where Latina women make 54 percent of what white men make, this may not be surprising, but still warrants pause. Just as it’s insulting to Rousey to focus primarily on her face, as though looks were all that were on the line, it’s just as limiting to paint Nunes as an impassive, exotic “foreboding figure.”

Gender parity has long been a fraught subject across professional sports, and the fact that women are on the rise in one of the most hyper-masculine realms among them is an irony rife with implications. Bedeviling matters further, the same company that bought the UFC in 2016 also owns the Miss Universe pageant. Certainly the spectacular, showy side of MMA lends itself to a performativity of gender not unlike that of drag (not to mention porn). And certainly Rousey’s rise as a tough-in-gloves, yet acceptably feminine, straight-identified Caucasian celebrity may have had something to do with her mainstream popularity, as well as the expansion of women joining the sport. But to dub Rousey a feminist based on this alone is also troublesome — her scoffing at being called a lesbian, for example, feels outsized at best, homophobic at worst. “[W]hen people think that because I’m a female athlete that I must be a lesbian…I’m like, ‘No, I love men so much that I beat the fuck out of girls for a living just to take them all out!’” she told Rolling Stone in her 2015 cover issue. Nothing against an ass-kicking straight girl, but methinks the lady doth protest too much.

On the flipside, Nunes embraced Friday’s victory with a show of humility and solidarity to other female fighters. Upon being declared the undisputed champion, Nunes proceeded to grab her trainers and coaches to shake hands and hug. Her first words to announcer Joe Rogan — “I really appreciate your Twitter” — alluded to his acknowledgment of the uneven promotion of the two women. Asked how she responded to the lack of attention toward her in the promotions prior to the match, Nunes didn't answer, and instead pointed out her girlfriend, strawweight Nina Ansaroff, on the side of the ring, beaming that she’ll be the next UFC champion.

In his 2009 essay “The Diplomacies of Ultimate Fighting: Resurgent Masculinities of Global Militancy,” political scientist Dan Bousfield argues that the rise of MMA and the UFC “accompanies a new globalized performance of gender that has become a powerful cultural and political moment,” remilitarizing masculinity in response to feminist critiques of global conflict and war. Eight years later, with women rising in the UFC and all U.S. Army combat roles open to women, it’s worth asking whether women might not effectually feminize masculinity from the inside. Just as female fans have been said to be the NFL’s most important demographic, women are likely to gravitate more and more to the UFC, especially as female fighters gain the esteem they deserve. “We have in this division a lot of talent, you know?” stressed Nunes from the Octagon ring. “You guys have to look at these girls working hard.” Whether Rousey could vanquish boxer Floyd Mayweather (as she boasted in 2015) is beside the point; she, and Nunes, and Ansaroff — not to mention trans fighter Fox Fallon — are transforming not only how we approach professional fighting, but how we see women as contenders worth watching in their own right — no matter how femme, butch, scrappy, or glam.