Paying for Trump's wall: Don't let an absurd promise distract us from a terrible policy decision

Can we just forget Trump's crazy promise to make Mexico pay for the wall, and focus on what a dreadful idea it is? 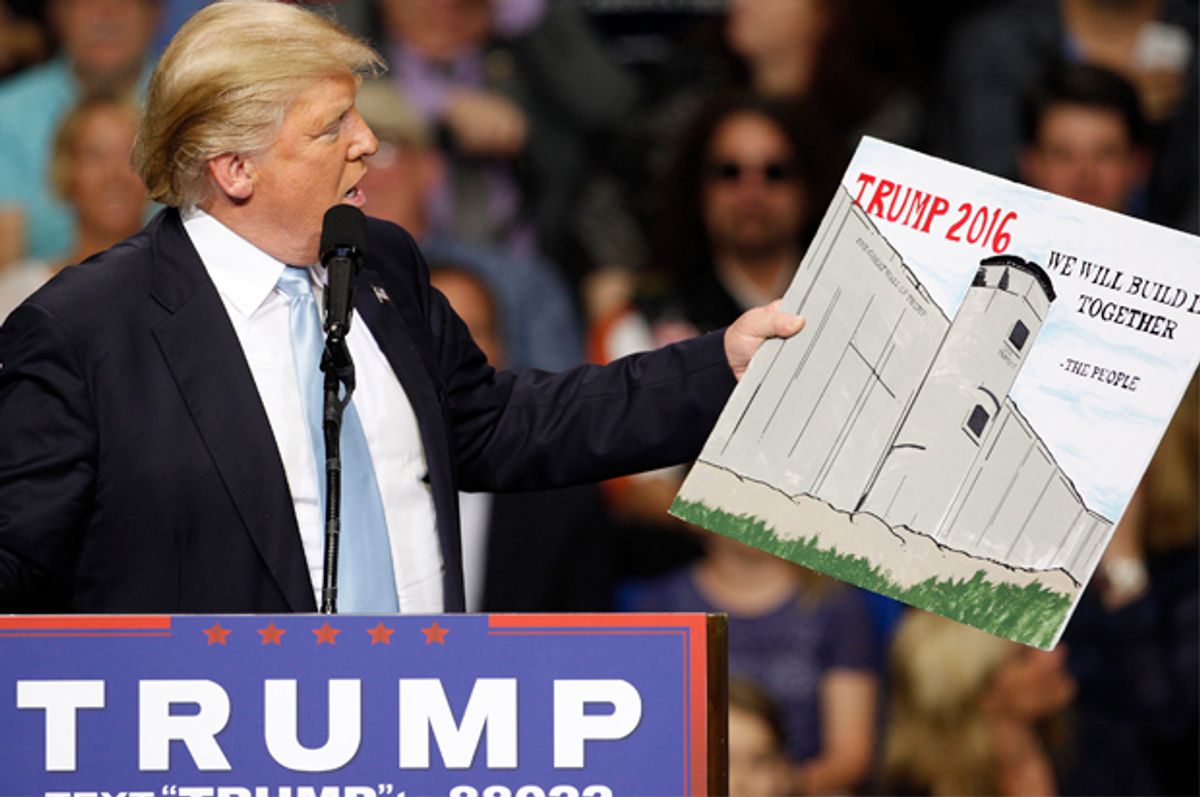 U.S. Republican presidential candidate Donald Trump holds a sign supporting his plan to build a wall between the United States and Mexico that he borrowed from a member of the audience at his campaign rally in Fayetteville, North Carolina March 9, 2016. Trump was interrupted repeatedly by demonstrators during his rally. REUTERS/Jonathan Drake - RTSA418 (Reuters)
--

So it turns out that Mexico will not be paying for Donald Trump’s famous border wall. Politico reported this week that the Trump transition and Congressional Republicans are working on a plan to fund construction of a barrier along the Mexican border through the normal appropriations process. That means American taxpayers will be on the hook for this one.

The reaction to this news from the press has been to focus on Trump breaking his oft-repeated campaign pledge to make Mexico pay for his border barrier. “The move would break a key campaign promise when Trump repeatedly said he would force Mexico to pay for the construction of the wall along the border,” CNN reported. The cable network even framed the story as Trump letting Mexico “off the hook” on this issue, as if the sovereign nation just south of us was ever under any obligation to make good on the president-elect’s campaign rhetoric.

This is a fine example of how press accountability falls short when Trump is allowed to set the narrative. Mexico was never going to pay for Donald Trump’s border wall. Mexico is never going to pay for Donald Trump’s border wall. Trump’s campaign-trail boast that he would force our southern neighbor and key trading partner to fork over billions of dollars for an infrastructure project it doesn’t want was straight-up posturing. His continued insistence that Mexico will somehow remunerate the United States for the costs we incur while building the border wall is still more posturing, meant to prop up his initial ridiculous boast.

As such, pointing a finger at him and screaming “Aha!” when he breaks a “key campaign promise” that was never going to be kept because it exists on the plane of the absurd doesn’t have much value. Trump would actually love to get into another pissing match over who will ultimately pay for the wall, because he can strut and act tough and exploit the Mexican government as a focus of nationalist resentment. What matters is that this dumb wall is being built at all, and how the decision to move forward on it fits in with Trump’s and the Republicans’ other policy priorities.

When Trump talks about the wall, he hits two themes: It will secure the border, and it can be built cheaply because he’s the world’s best builder. Neither of these things is true. Trump’s approximations for the cost of building the wall have generally been between $8 billion and $12 billion. Those are absurd lowball estimates. MIT’s Technology Review crunched out various budgets for walls of different lengths and heights, and it found that costs would run anywhere from $27 billion to $40 billion. And that’s just to build the damn thing. Costs for maintaining a piece of infrastructure that size would run high and never end.

As for providing border security, it would be an extraordinarily expensive way to address a problem that has already declined massively. According to Border Patrol statistics, there were just over 400,000 apprehensions of undocumented immigrants coming across the southern border in 2016 — down from more than 1.6 million in 2000. And even if you assume that the wall would lock down the border (a dodgy assumption, given that walls can be breached, climbed, tunneled under, and otherwise defeated), you’re still only addressing part of the problem. The Department of Homeland Security estimated that more than 415,000 immigrants overstayed their visas in 2015. No wall will address that issue. (Incidentally, Canadians, not Mexicans, were the biggest subgroup of visa overstayers.)

So really what we’re looking at is the incoming president and his craven enablers in Congress committing many billions of dollars to what is a basically a monument to anti-immigrant resentment. It’s helpful to view this priority of theirs in the context of their other priorities -- like, say, the repeal of the Affordable Care Act. Republicans are hell-bent on moving quickly to eliminate the ACA’s subsidies for insurance premiums and payments to states that expanded Medicaid.

That means their vision of governance is to spend considerably less public money on things that help people obtain health coverage, and that have contributed to a record-setting decline in the uninsured rate, while spending countless billions more in public funds for a largely symbolic masonry project in the desert. That’s a more useful way of looking at the wall story than telling people that Trump broke a crazy promise he never remotely intended to keep.