Send in the clowns: Donald Trump, Julian Assange and the enemies of liberal democracy

In a bizarre coda to a surreal election, Trump and Assange join forces to show us how badly democracy is broken 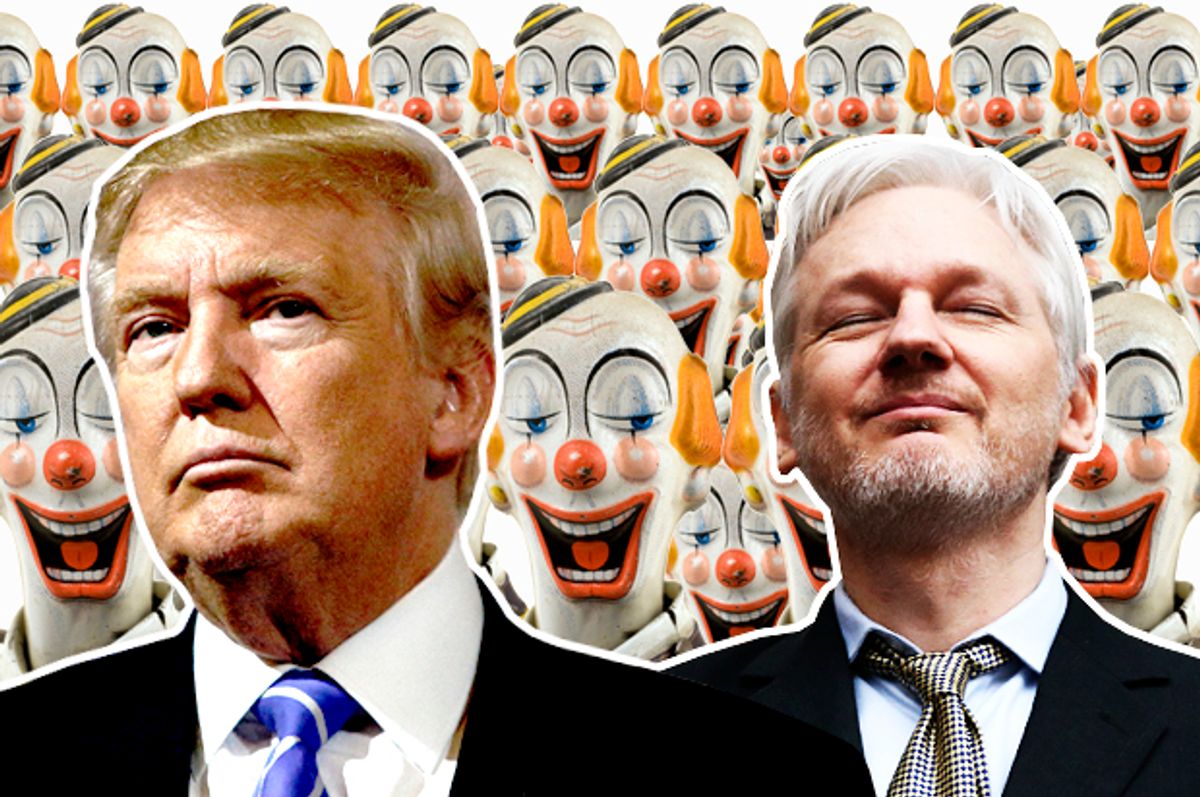 There is a long tradition of mistrust in democracy — or opposition to democracy, which is not quite the same thing — to be found in philosophy and political thought as far back as we can see. Not all of it is as repulsive as the notorious examples of the 20th century, or as ludicrous as the examples we see around us right now.

That anti-democratic or counter-democratic tradition encompasses a wide range of thinkers and leaders who don’t appear to have much else in common, from Plato and Socrates, at the dawn of Western philosophy, to Martin Luther and Edmund Burke and Alexander Hamilton and Friedrich Nietzsche and Leo Strauss. That strain of thought isn't just found among "conservatives," either; Michel Foucault, Jean Baudrillard and Slavoj Žižek could certainly be called critics of democracy as well.

Donald Trump and Julian Assange are no better than weird footnotes to that list, or pale after-echoes of its influence. But a shared antipathy for democracy, at least as currently practiced in the Western capitalist order, is the secret sauce that binds them together and the source of their unlikely alliance. Assange has probably read some of those people and disagreed with them about virtually everything; Trump has never read anything by anybody, and has no political theory beyond a theory of his own greatness. But for different reasons they both view the dominant political and economic system of the postwar era, often called “liberal democracy,” as a failure that deserves to be subverted or destroyed. Given how much of that they have accomplished in a remarkably short time, it’s not clear that they’re wrong.

Each of those outsiders and renegades on my Plato-to-Žižek list — that’s what they all were, without question — held up a mirror to what he perceived as the dominant pieties of his society and said, in effect, “Take a long, hard look.” We don’t have to agree with their conclusions, and for the most part they don’t agree with each other. But maybe we should have paid closer attention. The smug assumption of most of the Western world’s educated elite, for about the last 25 years, was that the internal contradictions of liberal democracy were a management or engineering question, and that all such critiques had been swept into the ashcan of history. Well, look what happened.

In the early 1990s, when the Cold War had ended and the “end of history” had been proclaimed, liberal democracy — understood as a fusion of a parliamentary, multi-party electoral system and market capitalism — seemed destined to spread everywhere and reign forever. That was entirely delusional, as the events of Sept. 11, 2001, revealed, not to mention the decade-plus of war, civil war, revolution, counterrevolution and economic turmoil that followed. But the delusion persisted: The adherents of what I heard Jeb Bush, a year ago in New Hampshire, describe as “regular-order democracy” continued to hold an almost Marxist faith that history was on their side and victory was inevitable. Well, look what happened.

In the cold dawn of 2017 liberal democracy faces a profound crisis, virtually everywhere it seemed to hold permanent sway. After Brexit, after Trump, after the resurgence of right-wing nationalism in almost every bland social democracy of Europe, who can doubt it? Amid the murky unfolding tale of what Vladimir Putin did or didn’t do to undermine the 2016 presidential election — and the deeply bizarre spectacle of so-called conservatives rushing to embrace Assange and WikiLeaks, and so-called liberals rushing to embrace James Clapper and the CIA — what other terms could we use? The adjective “existential” has become journalistic jargon, thrown around to accentuate seriousness, but if this is not an existential crisis for democracy, I don’t know what one would look like.

Nothing could symbolize that crisis more perfectly than the info-bewilderment partnership between Trump and Assange, a surreal plot twist revealed after the drama of the 2016 election is over, like the post-credits “stinger” scenes in Marvel Comics movies. It’s such a strange development that mainstream political commentators can’t conceptualize it except by way of conspiracy theory or pop-psychology clichés, which is all that most political commentary consists of anyway. Maybe Assange did Putin’s bidding and released the hacked Democratic emails in order to install Trump on the throne in Washington as a Russian puppet. (While no theory can be deemed too outlandish for the 2016 election, that one comes close.) Or maybe it’s a story about two wounded, lonely narcissists, desperate for attention and affection despite being world-famous, who staged a power grab to feed their enormous egos.

Both things could be true, God knows. In fact, the second theory is generally consistent with a more functional and economical one: Trump and Assange saw in each other an expedient tool to punk American democracy, to reveal its hallowed institutions as crumbling shams and its received wisdom as empty drivel. It would be reasonable to suppose that one of them had an anarchistic or nihilistic critique of democracy and the other just saw it as a ripe target for hostile takeover, but that’s not really the important part. They had the same end in mind and had they ever talked about it (which they almost certainly didn’t), they would have agreed that the end justified the means.

It seems pathetically possible that Julian Assange, trapped in his London embassy, imagines himself remembered by posterity as a revolutionary genius, a latter-day Danton or Trotsky (albeit one with no movement behind him) who did humanity a service by bringing down Hillary Clinton and revealing the oligarchic hollowness of late-stage capitalist democracy. Donald Trump, I presume, can imagine nothing better than being Donald Trump and leaving behind an endless mausoleum of craptastic skyscrapers, row upon row the whole way around our dead planet. His goal is a lot more realistic, or would have been if he hadn’t gotten it into his head to run for president. Because he is truly going to suck at that job; James Buchanan’s cherished status as Worst President Ever is in definite jeopardy.

But let’s say this: Whether Trump and Assange worked in concert or just found themselves in accidental harmony alongside Putin, in a Halloween coalition of Dudes Against Democracy, is not the central issue. Whether you see them purely as agents of destruction or agree that in some ways they embody the long-standing critique of democracy within Western society, or even the bad conscience of democracy, is also not the big question. The point is that the remarkable damage Trump and Assange — one rich loudmouth and one isolated activist — were able to inflict on the American political system was not a fluke or an anomaly.

Sure, the actual election of Donald Trump as president was kind of a fluke, for various reasons we’ve heard a lot about over the last few weeks. Take the top one-tenth of Hillary Clinton’s vote total in Los Angeles County and spread it thinly across the northern Midwest, and she takes the oath of office in two weeks and everybody gets to pretend things are normal. Things are not normal in American politics or global politics, and they wouldn’t have returned to normal had Clinton managed to defeat a blustering, xenophobic would-be tyrant instead of finding every possible way to lose to him. At least this way we can’t ignore it.

These clownish new critics of democracy have forced us to confront old ideas that remain difficult to digest. My former Salon colleague Sean Illing, with whom I spent long nights in Cleveland during the Republican convention debating this stuff, recently wrote an article for Vox exploring Plato’s account of how democracy can slide into tyranny “when mob passion overwhelms political wisdom and a populist autocrat seizes the masses.”

Democracy, for all its charms, is said to be a poor substitute for oligarchy. It’s an “agreeable form of anarchy,” Socrates [by way of Plato] tells us. Like every other regime, a democracy collapses of its own contradictions. It’s full of freedom and spangled with every kind of liberty imaginable.

Over time, though, this boundless freedom degenerates into herd hysteria. Belief in authority atrophies. A spirit of excess takes hold and, eventually, “the state falls sick, and is at war with herself.”

If we’ve heard rather too much about Hamilton’s original design for the Electoral College (which never really applied in practice), his elitist desire to protect the workings of the American republic from the “great beast” of public opinion doesn’t sound as lamentable as it used to. “Take mankind in general, they are vicious,” he wrote in 1787, “their passions may be operated upon.” A few years later, he professed “an indifferent opinion of the honesty of this country, and ill foreboding as to its future system” of government.

If Hamilton and Burke, clearly drawing on Plato, thought that pure democracy wouldn’t work and had to be insulated with oligarchic institutions, later criticism of democracy took a darker turn. It would take a doctoral dissertation — indeed, it has taken many — to tease out the conflicting political ideas found in Nietzsche, who feared that democracy would devolve into a soul-crushing culture of egalitarian mediocrity and also that it might give way to populist idiocracy. And I’m simply not going there with Martin Heidegger, who can be read as offering an interesting critique of American democracy as a technocratic annihilation of the past, just the teensiest bit compromised by the fact that he was a Nazi.

There’s a sense in which all those themes and more, including the radical-left critique of democracy found in Foucault or Žižek, can be glimpsed in the present crisis. America has two political parties, both of which have been ripped away from their traditional moorings. The Trump-era Republican Party appears completely psychotic: It was conquered by an outsider candidate who realized the party’s voters didn’t want anything it was selling, but who once elected has apparently reverted to the most extreme form of Republican oligarchic rule.

The Democratic Party, as my colleague Paul Rosenberg observed this week, cannot decide what it stands for or whom it represents, and has made the potentially fatal error of identifying liberal democracy with neoliberalism, the widely despised philosophy of free markets, austerity budgets and unfettered global capitalism. I can’t imagine a more scathing indictment than the fact that large numbers of supposed Democratic voters, faced with the prospect of President Donald fucking Trump, simply couldn’t be bothered and stayed home.

Loyalists of both parties remain zealously devoted to the proposition that nothing has gone fundamentally wrong with democracy, but I am not sure the people, “great beast” though they may be, are fooled. Republicans fall over themselves to praise Assange, a man many of them literally argued should be executed without trial when he was releasing Iraq war secrets. Democrats grovel before the CIA, the agency that told us Saddam Hussein had weapons of mass destruction and maintained a network of secret torture facilities in an unknown number of countries.

Both sides have abandoned any semblance of principle and are just desperate for a story that confirms their understanding of the world. Well, here’s the story Donald Trump and Julian Assange told us about the world, although they couldn’t have done so if it weren’t already true: Democracy isn’t working.