Voting with my eyeballs: I'm tuning out Trump enablers like Jimmy Fallon

I watched the Golden Globes for decades, but this year I'm a one-woman boycott 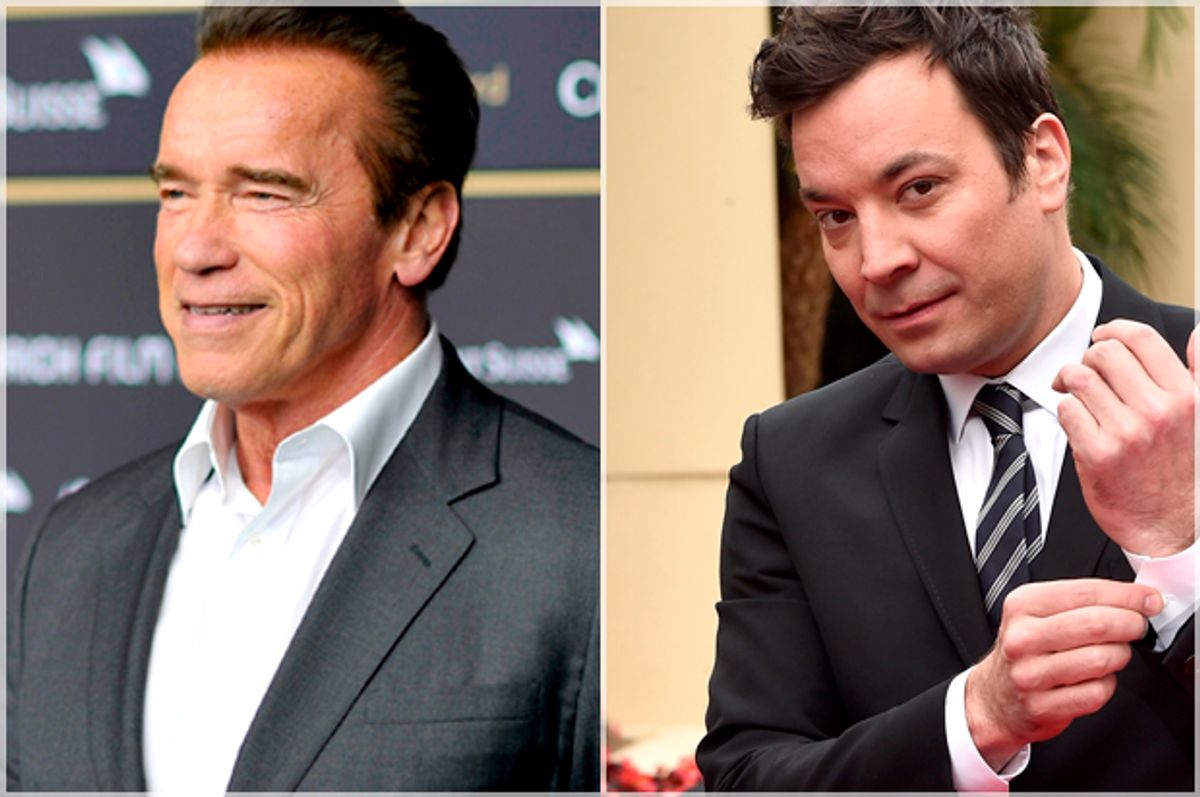 Every winter, I approach Hollywood awards season the way baseball fans approach spring training. I eagerly consume every bit of information about every gown, every gaffe, every controversy, diving deep into the minutia of live televised spectacle. If there were red carpet trading cards, I would own all of them. But on Sunday, for the first time in memory, I'm not watching the Golden Globes. It's part of my new strategy for tolerating the next few years. Because I don't want to look at Jimmy Fallon's smug, Trump-enabling face.

Something happened that moment in September when Fallon playfully tousled Donald Trump's hair. It seemed to many of us a point of no return, a normalization of something the opposite of normal. I fully get that the host of "The Tonight Show" is not an island unto himself — Jimmy Fallon works for the network that gave Donald Trump prime time real estate from the moment it began airing "The Apprentice" back in 2004. Fallon is a company man, and his role in that company is the nation's human soporific. Yet sitting next to Donald Trump that night, Fallon wasn't behaving as just a polite professional, doing his job. He was instead performing as a world-class butt kisser, enthusiastically smooching the butt that would happily undermine our entire democracy. Which is where I fold.

Ever since that fateful "Tonight Show," Fallon, always so endlessly pleased with himself, so eager to not give offense, has emerged as an increasingly stark contrast to his network mate, Seth Meyers, who reliably manages to be simultaneously entertaining and authentic. That's why the mere thought of watching Fallon desperately smirking through the Globes — a show that's traditionally the Oscars' looser, drunker sibling — just seems like a pathetic way to spend an evening. So instead of tweetstorming on Sunday about what Rami Malek is wearing, I will be watching "Poldark." Again.

I see my friends grappling with similar choices, large and small, lately. A few weeks ago, a fellow mom told me that after considering a respected university in Ohio, their family had ruled it out for their daughter because of the state's aggressive push toward punitive abortion restrictions. I don't blame them. By the way, if you believe that young women and their families shouldn't be concerned about things like unintended pregnancy — which can occur from birth control malfunctions and sexual assault — perhaps you're in that privileged population of individuals who've never really considered the amount of brain space other people really have to devote to their safety and autonomy. And I am reminded of how, over the past year, North Carolina has been learning that if you insist on pushing back on progress, the consequence may be that other people are going to avoid spending their money in your state.

But resistance is rarely a neat and precise matter. I can declare  that states that don't protect the reproductive rights of women or the privacy of transgender persons don't deserve my tourism or tuition, but can also admit that when Shaun King recently called for an Injustice Boycott that included my state, I immediately wondered how such a protest would affect my neighbors who depend upon tourism and tuition in their own livelihoods.

Similarly, in 2014, actress Rose McGowan came under fire for hosting a party at the Los Angeles Dorchester Hotel, which was being boycotted because of its sharia law-supporting owner, the Sultan of Brunei. As McGowan argued it, continuing to do business with the hotel was an act of support not for its owner but "all the wonderful, struggling people who work" for it.

If, for a time, I chose not to shop at Macy's — and I wouldn't go near it while it was carrying Donald Trump's branded products — I was making a personal choice as a consumer. But the company's current economic struggles affect employees whose politics have nothing to do with the store's merchandise. On a far grander scale, it's one thing to have deep concerns about fast fashion and sweatshop practices — but one must also understand that the global economic structures around those issues, and the real-life consequences for workers, are ethically complex.

Decisions that align with one's established habits are easy. I would never in a million years have watched "The Apprentice" regardless of the outcome of the election. I don't watch Fox News, so its new all white males cabal isn't something I suddenly need to turn away from. I already have Kellogg's products in my home, so the brand's dissociation from Breitbart is just another reason to keep using them. Mindful consumption becomes harder when the choices are murkier — "Saturday Night Live" gave Trump an enormous boost when it made him a host in 2015; it also gets under his skin more reliably than any other show on television.

On Monday morning, Jimmy Fallon will still be a famous multimillionaire and I will still be just another Hillary-supporting Aidan Turner fan. But in the wake of a lot of soul searching lately about what constitutes conscientious consumerism, I know I have to keep not just refusing to patronize the things that don't align with my values, but actively, vocally supporting those that do. And it's clear that figuring out how to vote with our eyeballs, our clicks and our dollars in a way that feels meaningful is going to be just another  part of the active work of resistance for a whole lot of us, for the next few years.