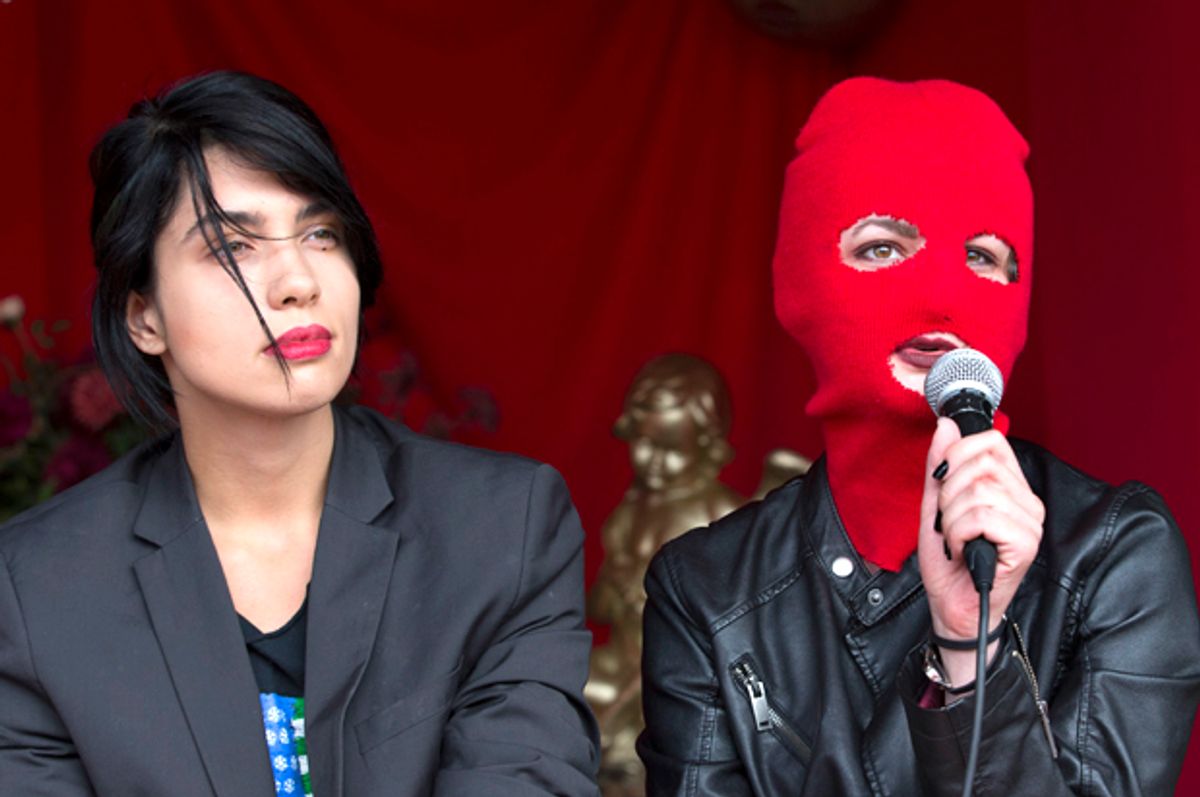 On an icy morning three weeks after the United States presidential election, Hunter Heaney was sitting over a cup of tea on the Lower East Side, reflecting on how his experience supporting “creative dissent” in Eritrea or Cuba might serve Americans resisting the civil rights incursions of a Donald Trump regime.

Heaney, a lanky, intellectually omnivorous 46-year-old, is the founder of the Voice Project, an organization that helps endangered artists and activists around the world. “We don’t instigate actions," he said. "We come in, we say, 'What do you need?'”

Heaney is a Harvard Business School graduate and former Goldman Sachs analyst who “got sick of pushing money around in circles.” In 2008, he was working in a displaced persons camp in Uganda when he heard the “Dwog Paco” songs. “These were Acholi-language songs sung by mothers of abducted child-soldiers, telling them to come home, no matter what atrocities they’d committed.” Heaney and a DJ friend recorded the songs and helped broadcast them into areas held by the Lord's Resistance Army -- the guerrilla group led by Joseph Kony -- and thus the Voice Project was born.

I’d first become aware of the Voice Project through its support of the Russian feminist protest group Pussy Riot. When Pussy Rioters Nadya Tolokonnikova and Masha Alyokhina were sentenced to two years in a labor camp for singing their "Punk Prayer" in a Moscow church, the Voice Project became one of their most effective advocates. “Nadya and Masha’s lawyer had set up this fraudulent website where donations went into a black hole," Heaney said. "We made them a transparent donation site; we helped them hire a local lawyer who could visit them, check for bruises. When Nadya disappeared in prison, we started the ‘Where’s Nadya?’ campaign.”

Once the Pussy Riot members were released, Heaney helped bring them to the U.S., where they testified before the Senate about the Russian penal system. More surprisingly, Nadya and Masha also insisted on making an inspection of American prisons. “Nadya says there are points where the U.S. is actually worse than Russia,” Heaney observed. “It’s no coincidence that the stock of private prison corporations like CAA went through the roof with Trump’s election.”

This overturning of our Cold War dichotomies revealed a significant shift: Post-9/11, it was no longer just Americans who campaigned against tyrannies abroad, but Russian dissidents who came here to help us fight our own abuses. Pussy Riot went to Wisconsin to join union-members protesting Gov. Scott Walker’s war on collective bargaining rights. And throughout the U.S. presidential campaign, Nadya posted on social media her fierce satires of “the pussy-grabber-as-president,” while denouncing the inequities that have made Trump’s populism so appealing to American voters.

“I really like the Voice Project because there is no hypocrisy,” Nadya told me over the phone from the Dominican Republic, where she was taking a post-election break with her young daughter. (“All our sandcastles look like the White House: I keep finding myself storming the White House!”) “I’m a stranger, a nomad from this town in the Arctic Circle, but I feel the whole world belongs to me, and I have to protect people’s rights without any borders. It’s very strange for someone who’s basically been running around thinking about her vagina!”

I was curious to know what likenesses Nadya and Hunter saw between Donald Trump and other demagogues of their acquaintance. “Trump has learned from modern authoritarian leadership. He doesn’t hide it,” Nadya said. “He’s talking about people he would claim [are] terrorist -- he will kill them in the toilet. What’s really scary about Trump is his big symbolic power, even before any political action. It took Putin 16 years in power to reach this point.”

“There are so many analogies between Trump and charismatic dictators,” Heaney agreed. “Just look at his promises to build a wall and to keep Muslims out, as Viktor Orban has done in Hungary." Trump's threat of forced deportation, he observes, is resembles what Turkish president Recep Tayyip Erdogan has carried out. "His calls to limit criticism of those in power reminds me of lèse majesté laws in Malaysia, Thailand, Vietnam. In some ways, though, Trump’s threats go even farther. Openly advocating the use of war crimes — in our work, we tend to hear that rhetoric more from warlords than heads of state.

“Already, in recent years, there’s been a steady erosion of due process and habeas corpus in the U.S.,” Heaney continued. “And Trump’s financial interests,” whether his fossil fuel holdings or his business ventures in authoritarian countries, “all happen to coincide with a further weakening of the rule of law.”

The Voice Project’s most recent American case involves documentary filmmaker Deia Schlosberg, who faces charges with a maximum prison time of 45 years for filming the Dakota Access pipeline protests. “Normally a trespassing charge would be what we’d expect for the media, not conspiracy and sabotage," Heaney said. "The Standing Rock protests are the most important cause right now, and that battle’s only just begun. Trump is directly invested in two of the companies building and financing the pipeline,” and his chief energy advisor Harold Hamm owns the company whose oil is scheduled to run through it. “No wonder he’s promised to eliminate government oversight of oil and gas infrastructure projects! As Masha Gessen wrote, rule No. 1 is ‘Believe the autocrat. He means what he says.’”

Masha Gessen is a Russian-American writer whose article “Autocracy: A Survival Guide,” published on the New York Review of Books website two days after Trump's election, became a kind of inspirational manual to stunned Americans asking the question, "What Is to Be Done?"

Gessen’s family emigrated from the former Soviet Union to Boston when she was 14, but in 1991 she returned to Russia to cover the country’s transformation from a chaotic, corrupt free-for-all to a one-man dictatorship. Three years ago, Gessen brought her Russian wife and three children back to the U.S. because of Putin’s increasingly virulent anti-gay laws. Now she wonders, half-joking, whether she chose the right country. “What do you think of Canada? Too close in case of nuclear war?”

The evening after my session with Heaney, I met Gessen at the Russian Vodka Room in mid-Manhattan, where boisterous millennials were celebrating an early Thanksgiving with horseradish- and ginger-infused shots and smoked herring.

“I thought Trump was going to win because I’ve seen it happen before,” Gessen told me. “There are certain points in history when people lose a sense of their place in the world, and then they’ll go with the first person who offers them a return to an imaginary past. Americans’ basic understanding of who they are as a society has been destroyed over time, but it finished with the 2008 housing collapse, when people were kicked out of their own homes: That destruction was not acknowledged by the larger culture.

“What we’ve learned in the last few weeks is the kind of government Donald Trump is building: it’s a Mafia state,” Gessen continued. “In a Mafia state, the patriarch rules as in a family. He doesn’t need to spell things out — he expects intuitive obedience, and there are penalties for not intuiting his wishes. He’s going to choose people based solely on loyalty and family membership. If they get their positions through merit, they wouldn’t owe everything to him. It’s not his ultimate goal to destroy freedom and democracy, but you have to, if you want to steal as much as possible, especially if you have such a thin skin.”

Many commentators have focussed on Trump’s unpredictability, but to Gessen’s mind, “He already has a long and consistent public record as a real estate magnate. We already know he has a history of institutional racism, that he is a bad-faith partner. Contractors are stiffed by Trump, workers go unpaid. He’s entered into a contract with American voters and he’s going to stiff them too, because he always stiffs people.”

As for his expressed fondness for autocrats such as Vladimir Putin, Gessen predicted that “Putin and Donald Trump is going to be the shortest honeymoon in history. Putin’s created a fully mobilized society, and he needs the U.S. as an enemy. When they beat up gays, it’s America they’re beating up. Nuclear confrontation? It’s a greater risk than 40 years ago," she said, even during the darkest days of the Cold War.

“I’m utterly pessimistic,” Gessen concluded. “I’m not aware of any aborted autocracies in modern history. Democracy is an aspiration, and it is defenseless against people who use it in bad faith. America’s advantage is that it has an incredibly rich cultural environment, a vibrant public spirit. Can we learn from other countries’ mistakes? The only thing to do is the exact opposite of what Germans, Poles and Hungarians did, which is to wait and see. We must panic and protest, presumptively assume the worst.”

Masha Gessen’s injunction to “panic and protest” is not so far from Nadya Tolokonnikova’s message to Americans who are still hoping that the president-elect might be sobered by office. On a recent Facebook post, Nadya wrote, “Don’t tell me that it’s going to be okay. Nope. We’re going to lose our civil rights if we’re incapable to protect them. Trust me. If your government doesn’t represent you, create an alternative. You’ll overcome.”

In the new political order we are entering, such exhortations may soon seem as salutary as the Ugandan women’s “Come Home” songs, leading their abducted children back to a saner place.

“A Trump presidency is definitely going to give organizations like ours more clients,” said Hunter Heaney. “I take no joy in it. We’re already having to adapt our playbook from other countries. I never thought stuff I learned in the Congo could apply here.”

Fernanda Eberstadt is a novelist and essayist. Her most recent book is “Rat."