What went wrong with the Democratic Party? Three big failures that led to the current debacle

There's hope! But unless the Democrats can learn from the mistakes of the recent past, they don't have a future 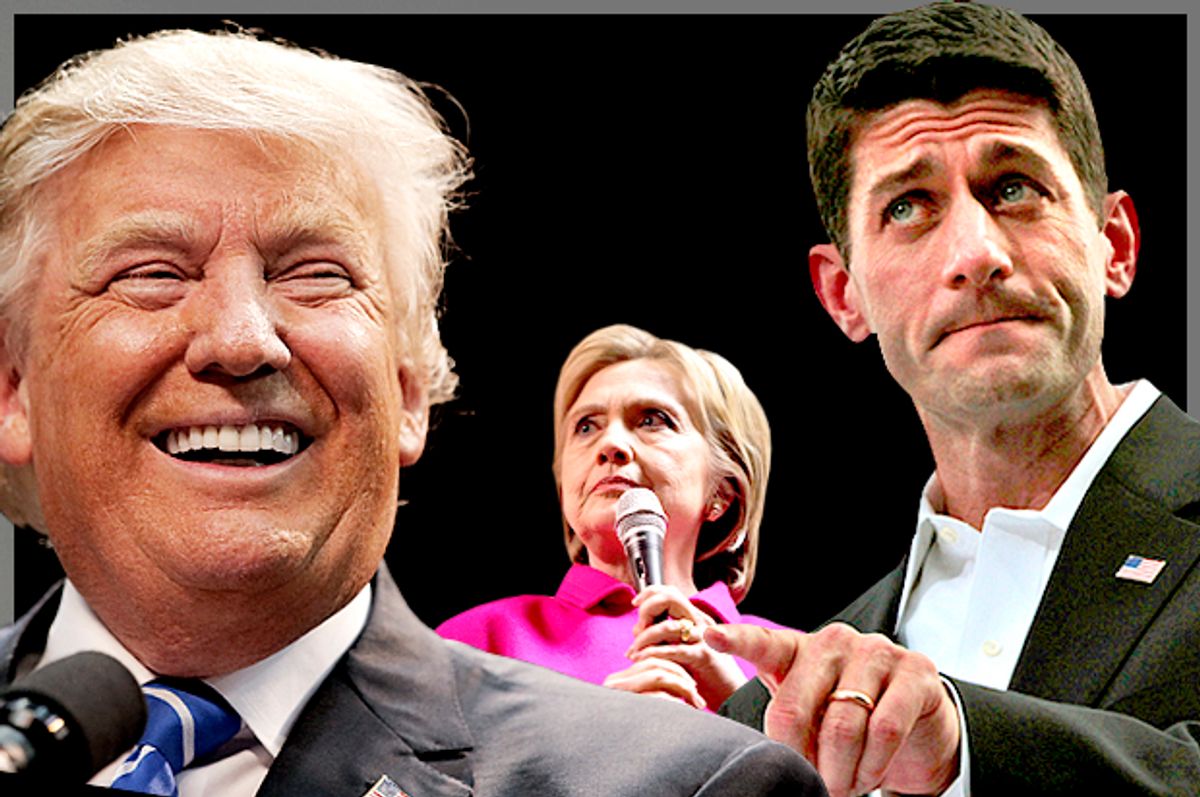 To an extent that is rarely true of an opposition party, Democrats can claim a mandate of resistance. Donald Trump lost the popular vote by a large margin, he’s incredibly unpopular and the Republicans have broken norms around using any tools available to gum up the opposition party’s agenda. In a welcome development, Democrats have largely avoided their classic debate about whether they should throw women or people of color under the bus in order to remain electorally competitive (though some pieces in this genre have slipped through).

But while “resistance” is a welcome posture for Democrats, it’s one that very few have clearly defined. Most autopsies have focused on Hillary Clinton’s campaign failures and messaging, but these are ancillary to the more structural failures of the Democratic Party over the last few years and offer only limited help to understand what’s coming next. Next week, I’ll discuss some principles for Democrats going into the future. But before Democrats can go forward, it’s worth understanding what’s been going wrong.

Mistake 1: Focusing on Perception, Not Power

Throughout Barack Obama’s time in office, Democrats have proved incapable of fighting back against Republican subterfuge because of their commitment to "respectability politics." For example, James O’Keefe released a selectively edited video which he claimed showed that ACORN (a nonprofit organization that organized, mobilized and advocated for low-income communities) had advised him on how to buy a house and use it as a brothel. Rather than rallying in defense of ACORN, “an overwhelming majority of Democrats” voted with Republicans to cut off funding for an organization that had been “instrumental” in campaigns for living-wage ordinances, increasing the minimum wage and ending predatory lending.

Though the Obama administration was aware of the CIA’s assessment that Russia was trying to influence the 2016 election, it stepped cautiously around the issue, hoping to avoid the impression of using his presidency for partisan leverage. The FBI did not show the same restraint, and instead James Comey wrote his famous letter to the House Judiciary Committee that likely cost Clinton the election. Ironically, it was Obama’s commitment to keeping Republicans around in high-level positions (Comey is a Republican) that cost his party’s nominee the presidency. It is a nod at bipartisanship that will not be reciprocated by his successor.

When Republicans assume office, their first actions are to restrict democracy by limiting voting access, crush Democratic organizing with right-to-work laws and reward their donors with massive tax cuts. Yet when Democrats gain power they prefer to do the opposite, governing as pragmatic centrists. They rarely embrace a policy agenda that could build long-term power. Further, they have consistently believed that concessions to conservatives in policy design (markets) and frameworks (deficit neutrality) would reap benefits that never materialized. Democrats have been slow to defend their own interests because of their commitment to respectability politics. Finally, they have consistently overestimated the importance of norms and Republicans' desire to respect them. Democrats have consistently invested political capital in protecting liberal norms, while Republicans have not, creating inequities in power.

The failure of Democrats to realize how deep the Republican commitment to opposing their agenda runs has led to strategic errors. Take the earliest battles of Obama's presidency, when he extended a hand to House Speaker John Boehner, only to have Boehner leave the table at the last minute. Or granting concessions (more than $1 trillion in spending cuts, with no tax increases) to the Republicans during the high-stakes debt ceiling negotiations in 2011, which only emboldened Republicans to pursue the tactic again in 2013. As the Onion perfectly satirized, “Obama: Debt Ceiling Deal Required Tough Concessions by Both Democrats and Democrats Alike.” In a Health Affairs article, Helen Halpin (who advised the Obama administration on the development of the Affordable Care Act) and Peter Harbage note that Sen. Max Baucus spent “months” trying to forge a bipartisan bill, sapping precious time that Democrats simply didn’t have.

This flows from the Democratic desire for bipartisan policy, but also from a technocratic disposition. Many liberal commentators are holding up Trump’s support among beneficiaries of the Affordable Care Act to claim that the idea that policies would become entrenched is fundamentally wrong. In fact, it’s right -- the problem is that ACA was not properly designed to mobilize political support for it. The administration failed to use the exchanges to register voters (as they were required to by the National Voter Registration Act). Where the Medicaid expansion passed, it did indeed mobilize turnout.

Research is further establishing the feedback loop between progressive policy and Democratic vote share, not debunking it. The fallacy lies in believing that programs will simply mobilize people by dint of their existence. In reality, of course, most Americans aren’t schooled in policy. Institutions like unions and community organizations (like ACORN) traditionally mobilize these beneficiaries. Social Security privatization didn’t work because groups like the AARP have cropped up to defend these benefits.

It is widely understood that the party controlling the presidency will lose ground elsewhere. However, there is ample evidence that Democrats suffered more losses than were inevitable. For instance, in 2010, even the most pessimistic models dramatically underestimated the magnitude of Democratic losses in the midterm elections. Right now, Republicans control 23 seats in "split-ticket" congressional districts (that is, districts where voters supported one party's presidential candidate, but elected a House member from the other party), compared with 12 for Democrats. Democrats control more split-ticket seats in the Senate, but that’s because Senate terms are six years long. In the 2016 election, there were no split-ticket votes and nearly all of the GOP’s Senate candidates performed better than Trump. The Democratic Party has let itself atrophy down-ballot at a stunning rate. Kathleen Ronaye reports:

Under [former party chair Howard] Dean, the national party installed and paid several staff members in each state. But that program ended after Obama's election. State parties began to receive monthly payments of anywhere from $5,000 to $10,000, an amount that varies depending on the year. At some point, the parties have received no money at all.

That, in turn, has hampered the party’s ability to run viable candidates. In The Surge, Rhodes Cook writes:

In Alabama, for the first time in the party’s history, Democrats did not run a Senate candidate at all in 2014. In Tennessee, Democratic voters nominated a political unknown for governor who benefitted from a famous cartoon name (Charlie Brown) and a top line on the primary ballot … In Idaho, William Bryk drew 30 percent of the Democratic primary vote for Senate, even though he lived in New York. And in Nevada, the field of Democratic gubernatorial candidates was apparently so weak that a plurality of the party’s primary voters cast their ballots for a line labeled “None of these candidates.”

It’s not just one cycle. There was the trucker with no political experience who ran for governor of Mississippi in 2015, or the unemployed army vet facing obscenity charges for showing pornography to a college student who ran against Nikki Haley in South Carolina in 2010. In 2016 Jeff Stein documented some of the more egregious Democratic recruiting failures in potentially competitive House seats. Candidates included Frederick Lavergne, whose website was “filled with amazingly bizarre rants in Latin” and “a little-known county commissioner who has barely raised any money” (with a broken website). In one Texas district that Hillary Clinton carried, Democrats failed to even put forward a candidate. In a Virginia district that went narrowly for Trump, Democrats didn’t have a primary because only one candidate filed, a woman who “has run for the Newport News City Council four times and has lost each time; most recently in 2010 when she finished in fourth place, out of four candidates.”

As Roll Call reported last year, “More than a year from Election Day, Democrats are without top-tier recruits in five of the 11 races rated Tossups by the Rothenberg & Gonzales Political Report /Roll Call.” Democrats may claim these races are “unwinnable,” but Republicans have recently won gubernatorial elections in deep blue states like Vermont, Maryland and Massachusetts. Ironically, Larry Hogan, the Republican governor of Maryland, a state Hillary Clinton won by 26 points, is now considered by some Democrats to be “unbeatable.”

As the table below shows, Republicans have been far more successful at winning governorships in blue territory than Democrats have been at winning seats in red territory. (Partisan Voting Index, or PVI, is a measure of how much a state leans toward the Republican or Democratic Party.) This is only for the federal House and Senate, along with gubernatorial elections. We’re not even talking about state legislature races. Given these failures, it may make sense for Democrats to spend more time recruiting candidates and less time encouraging qualified candidates not to run in order to“clear the field” for the establishment favorite.

In a recent piece, Andrew Prokop noted that the current Democratic situation looks much like the one Republicans faced in 2008. Yet on second consideration, this is deeply troubling. For one, Republicans were coming off a historically unpopular president (Bush had a 24 percent approval rating) while Obama has an approval rating of 58 percent. In addition, Republicans had just presided over the worst financial crisis since the Great Depression, while Democrats are running on an economy with sturdy income growth and an unemployment rate of 4.8 percent. Finally, while Republicans were looking at a favorable electoral map in the 2010 midterms, Democrats are looking at an abysmal map in 2018. Their best chance to pick up Senate seats was squandered in 2016, when they were hoping to gain six to eight seats and instead picked up only two.

These mistakes are more obvious in retrospect and many choices, at the time, seemed reasonable. The party in power often struggles down-ballot, and Democrats typically perform worse in low-turnout non-presidential elections. Furthermore, it’s difficult to recruit strong candidates when they don’t think they can win. But these defeats were not inevitable, and Democrats have shown only some signs they understand the depths of their plight.

Democrats will not inevitably bounce back. Republicans have used their power to suppress votes, crush unions, redraw favorable districts, open the floodgates of money and deter organizing. The Republican advantage in statehouses will feed high-quality candidates into competitive races. They are better funded, and though Democrats won’t happily admit it, better organized. The goal of understanding these failures is not simply to relitigate old battles, but to understand how politics have evolved. The old paradigms that have driven Democratic politics for decades matter less than they once did.