You have been warned: "Trump Derangement Syndrome" will be a cudgel used to silence his critics 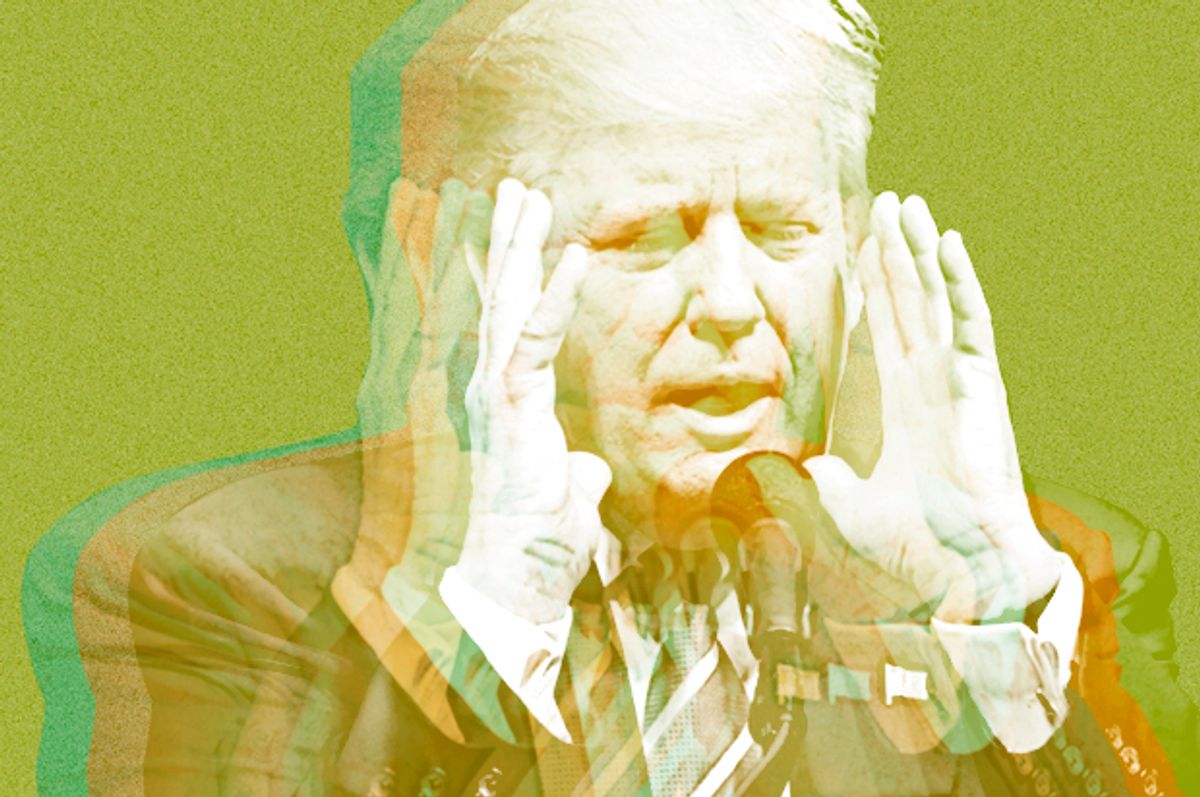 Do you believe that Donald Trump is a threat to American democracy? Have you shared these concerns and anxieties with other people? Do you see disturbing connections between how fascism and authoritarianism took hold in other countries and what is occurring in the United States at present?

If so, you may be suffering from "Trump Derangement Syndrome" -- at least according to Los Angeles Times guest columnist Justin Raimondo.

In a recent column, Raimondo explains:

The country is in the throes of a major epidemic, with no known cure and some pretty scary symptoms. It's called Trump Derangement Syndrome, or TDS, and it’s rapidly spreading from the point of origin – the political class – to the population at large. In the first stage of the disease, victims lose all sense of proportion. The president-elect’s every tweet provokes a firestorm, as if 140 characters were all it took to change the world...

In the advanced stages of the disease, the afflicted lose touch with reality. Opinion is unmoored from fact.

The mid-level stages of TDS have a profound effect on the victim’s vocabulary: Sufferers speak a distinctive language consisting solely of hyperbole ...

As TDS progresses, the afflicted lose the ability to distinguish fantasy from reality.

In the advanced stages of the disease, the afflicted lose touch with reality. Opinion is unmoored from fact. Life resembles a dark fairy tale in which the villain – Trump – is an amalgam of all the worst tyrants in history, past and present, while the heroes – Trump’s critics – are akin to the resistance fighters of World War II. TDS victims routinely compare Trump to Hitler ...

Raimondo then reaches a predictable conclusion:

If you ask a TDS victim what might help them feel better, they’ll use the word “normalize.” As in, we mustn’t “normalize” Trump. What they’re really saying is that normal means of dealing with him aren’t enough. Which raises the question: If he’s another Hitler, if he’s in league with Putin, then why is assassination out of the question? Poke a TDS victim and you’ll find they don’t think that “solution” is out of the question at all.

This is the final stage of the TDS epidemic: violence against a democratically elected leader. Unless a cure for TDS is found, this is where we are headed.

Raimondo's theory and claims are absurd.

They are an exercise in projection. It is not Trump who has been greeted with almost deranged, crazed, unhinged, unfounded, unreasonable and maddened opposition, but rather Barack Obama.

Republicans and the broader right-wing news disinformation-entertainment complex created racist conspiracy theories such as "Birtherism" (whose lead advocates included Donald Trump) in an effort to delegitimize the country's first black president. Republicans also used the language of the American Civil War in their threats of "nullification," "secession" and invocations of "states' rights" against Barack Obama. This was part of a broader pattern of reckless, extreme and irresponsible behavior by Republicans with the goal of undermining Obama's presidency. Republican leaders went so far as to develop a strategy of opposing every one of Obama's potential initiatives, regardless of what he proposed.

Basic facts should encourage people of conscience to resist Donald Trump. This is not derangement but rational and reasonable behavior. As I have explained numerous times, Donald Trump is a fascist authoritarian. He has promised to undermine basic tenets of American democracy, such as freedom of the press. Trump has also encouraged violence against his political foes. He has surrounded himself with political advisors who are affiliated with the most extreme and dangerous right-wing elements in American politics (and, increasingly, global politics), such as white supremacists and white nationalists. The American intelligence community has concluded that Russian spies and other agents, acting in support of Donald Trump's candidacy, actively interfered with the 2016 presidential election.

Ironically, efforts to pathologize or psychologize those who oppose Donald Trump actually reflect deeper problems with both him as a candidate and now president-elect, as well as his supporters. Psychologists and other observers have concluded that Donald Trump may suffer from narcissistic personality disorder. He is an egomaniac with delusions of grandeur. Trump is also profoundly ignorant, and as the Atlantic pointed out in a blistering condemnation during the 2016 campaign, "he appears not to read." His movement possesses the attributes of a political cult. Trump is now also the leader of a Republican Party (and broader conservative movement) that acts more like a religion than a functional political organization interested in responsible governance.

While Raimondo's claims are absurd and irresponsible, we ignore them at our peril. "Trump Derangement Syndrome" is a preview of the narrative framework that will likely be used by conservatives and their allies in a compliant corporate news media to silence Trump's critics. To that end, those who oppose Trump and his administration will be described as "crazy" or "unhinged." The mainstream news media -- because of its slavish adherence to false equivalency and a "both sides do it" narrative -- will insist that Trump's critics should "give him a chance" and are somehow "hypocrites" if they complained about Republican obstructionism against Obama.

The right-wing propagandists who will deploy "Trump Derangement Syndrome" against their enemies have one ultimate goal: to normalize the danger to American democracy represented by Trump and his supporters.

It is not those who oppose Trump who are deranged, but rather those voters who convinced themselves that a plutocrat authoritarian reality TV star con man and professional wrestler wannabe with no experience in government at any level was qualified to be president of the United States.

This is America's great national derangement. Those who stand against and oppose Donald Trump are patriots who are trying to return the country to sanity.